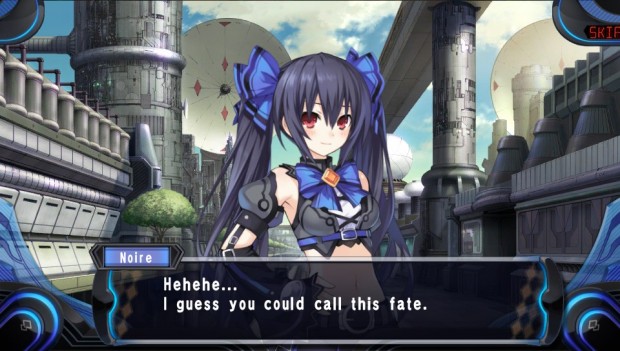 The Hyperdimension series is a concept that has always looked interesting from the outside looking in. An entire series of games based around parodying the console wars and the popular franchises from throughout history, with lots of wacky antics and great anime-style animations for the characters. This was what was going through my head when I booted up Hyperdevotion Noire: Goddess Black Heart, the strategy RPG spin-off of the cult franchise. Featuring much of the same charming style and aesthetic, but gameplay closer to Fire Emblem than a JRPG, this seemed like the perfect entry to try out the series and learn why so many enjoy the series so much.

Hyperdevotion Noire starts off on a strange note: you are a nameless young boy, venturing into the world of Gamarket to find your fortunes, when you stumble upon a young girl in trouble. After a quick battle where you each mutually save each other’s behinds, the girl introduces herself as Noire, the CPU of Lastation.

Noire usually plays second fiddle in the Neptunia series, but she’s surprisingly endearing as the heroine of her title game.

The CPUs of the four nations in this world fight for control of shares, or belief from their fans. A mystical woman tricked Noire into destroying her reserve of shares, or reverting them in some way, or… frankly, the story gets pretty nonsensical, pretty fast.

The short and simple version is that events are set in motion to where you become Noire’s manager/secretary/plaything, and by proxy help lead Noire and her steadily growing army of female companions in battle to set things right again in Gamarket.

You go about this through completing missions from your hub world of Lastation. Before you head off to battle, though, you can do a bevy of activities, and this is where Noire’s many systems and meters lost me.

The hub of Lastation is vibrant, and houses many different characters throughout the game.

There’s a shop from which you can buy items, which seems basic until you note that every certain amount of credits you spend earns you Sim points. These Sim points let you upgrade Noire’s house from a dirty shack to its former glory, which can help you in battle and open new dialogue trees, to better get to know Noire. There’s also a disc dev lab, where you can burn CDs with different buffs and stat upgrades for your characters to hold in battle, and a research lab, where you can synthesize new items and weapons for your characters.

Hyperdevotion Noire’s metagame is fairly expansive from the get-go, and it can be pretty overwhelming. Those familiar with the series might already know about crafting equipment and discs, but there’s certainly an information overload in the first several chapters for any newcomers to the series.

The battles themselves, however, are where Hyperdevotion Noire shines. The combatants you recruit throughout the game’s expansive story mode are varied and interesting, with skill sets often relating to their status as parodies of famous gaming franchises. The Metal Gear Solid character Lid was my personal favorite; using CQC, “boxed surprises” and a special skill where she jumps onto a helicopter and fires a grenade launcher at enemies, she was both an effective member of my party and a hilarious character to have around.

Positioning is important in most SRPGs, but I found myself paying extra attention to it due to Hyperdevotion’s Lily Boost system. Each character can execute a variety of special abilities at the cost of SP, but if they use a skill while adjacent to an ally, it will cost less SP and gain power and efficacy. This is gained through the adjacent characters pecking the skill user on the cheek; a little strange, but it also gains you Lily Points, which you can use to either unleash devastating special skills or transform one of the four main CPUs into their super-powered HDD state.

Many of Hyperdevotion Noire’s battles and locales center around these gaming parodies, creating really interesting battle situations. In the mission where I recruited Lid, I had to defuse several time bombs, while avoiding traps and fighting enemies reminiscent of the Metal Gear series. The Street Fighter character Lee-Fi’s battle was set in an electrified wrestling arena, and focused on using positional attacks and combos to best the enemies. These battles aren’t anything groundbreaking or particularly innovative, but as a package they keep things fresh, even after the rote feeling of repetition sets in.

Stages are vibrant and thematic, and environmental hazards like electric tiles can be punishing, for both you and your enemy.

The enemies also tend to embody famous game elements, from punchy skeletons and goos to Space Invaders. The enemy variety is decent, but you’ll still end up grinding enemies and missions for specific loot. Only certain enemies drop high-value crafting items and data chips for discs, so you’ll find yourself grinding out levels with those enemies more often than not. Hyperdevotion Noire does a good job of keeping that grind interesting, though, rewarding multiple playthroughs of missions with new loot and random enemy positions.

The gripe I have with Hyperdevotion Noire, one of very few I had, was the fan service. Now, this is a touchy subject, one that might make some Neptunia series mainstays guffaw, but its hard for me to recommend this game without prefacing it with this discussion. As I mentioned earlier, the game’s story places you as a young, presumably attractive, intelligent and all-around great guy who gradually wins the attention, if not the affection, of nearly every girl he meets in Gamarket. It’s a power insert, callously aware of the target market of young male moe (read: cute Japanese schoolgirls doing cute things) anime fans who buy these games, and it’s only compounded by the fact that each character you meet is female and comments on your better features pretty often. While it’s clear that there is romantic tension between your character and Noire, it still feels very much like a harem anime.

Story scenes usually play out in a visual novel style, with full English VA that is very well done.

As this harem situation grows and grows, you’ll unlock new story scenes, through either plot progression or their relationships growing after Lily Boosting two characters together enough times. These scenes often range from the cute and comedic to the lewd and voyeuristic. An early example: after Noire and your squad best Lee-Fi in battle, Lee-Fi demands a rematch. Noire decides to do a swimsuit beauty pageant, and the game cuts to a cutscene that slowly pans over their stills of them in swimsuits.

These scenes happen sparingly enough that they aren’t a dealbreaker, yet often enough that I feel uncomfortable playing this game in a public venue. Which is a shame, because Hyperdevotion Noire really is a fantastic game. There’s depth to be found in grinding for equipment upgrades and stat bonuses long after the campaign’s concluded, and the characters are endearing and fun, a nice change of pace if you’ve been tired of grim and brooding games.

Lily Boosting is a little peculiar, but provides incentive to properly plan out and execute strategies, rather than reckless assaults.

While the fan service scenes, heavy grinding and obscure systems frustrate me, I still find myself booting up Hyperdevotion Noire every night. Sometimes I just play a few archived missions for loot or manage inventories and answer requests for my Sim Noire; other times I’ll spend hours battling through new campaign missions and laughing at the antics Noire and her band of followers get into.

Fans of the series will get all they want and more from this entry, I’m sure. SRPG fans or those cautiously curious of the series, this a great title to get into, just know what’s in the water before you dive in. If you can overlook, or aren’t bothered by, the aesthetic and moe antics, you’ll find a solid addition to your Vita.

Hyperdevotion Noire gets a lot of things right, but falters when it crosses the line from comedic hijinks into creepy territory. Regardless, it’s a solid SRPG, and sure to provide Neptunia fans with many hours of content and entertainment.