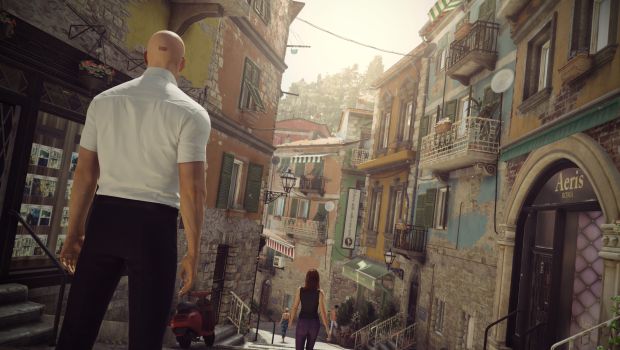 Hitman is all about the process. It’s a defined line from point A to B: receive target, kill target. Through many years and iterations, Agent 47 acts as proxy for the player, an alien invader in an ecosystem. Your job is to execute, and do so with as little impact and lasting impression as possible.

In between point A and B, then, is where the 2016 iteration of Hitman most innovates. There is little room to change the end objective, but the act itself can be executed in many methods. Hitman is methodical, but knows when to open up and when to close off, which doors are best to open and which the player should earn entry for. Doubt was raised for this new Hitman after Absolution’s lukewarm reception and an announcement of an episodic structure, but the newest chapter in 47’s story excels in form, presentation, and execution better than most of its predecessors.

Spanning six episodes across several continents and locales, the first season of 2016’s Hitman is procedural. There is a “mark of the week” pace to each area, with a thin narrative line and bookended cinematics linking each episode. It might seem disjointed, but the staggered release of each piece encourages a higher level of investment than it would have as one solid block.

Spacing out the six episodes encourages you to invest a little more in each locale, and really peel apart the layers of every sandbox. For good reason you should do just that, as IO Interactive’s design lends itself well to prolonged investigation. At first, areas like Sapienza and Marrakesh seem like sprawling landscapes, and you easily get lost in the shuffle. Civilians and security shuffle around on pre-ordained routes; the massive crowds are impressive, and make every area feel lived-in, and responsive to your actions.

Crowds also mean more eyes, though, and most of your actions as 47 will need to be done in the shadows. To master a level means finding every nook and cranny, learning routes and body dumps, and understanding which outfits will earn you passage to the next step. Few disguises will offer complete amnesty – though a low-level guard might just see you as another John Doe in fatigues, a sergeant or manager will know you’re not a member of their crew.

The detection can sometimes get spotty, and sometimes I’d find myself knocking a character out of their loop or interfering with the pre-ordained routing due to a mild mis-maneuver, like walking too close to a specific character, or a character spotting my misdeeds despite being in another room. This can get frustrating, as you have to navigate around these prying eyes to reach your targets, and so often the best methods are the abnormal and often times, absurd.

Opportunities are the streamlined version of this concept, where the game allows you to eavesdrop on key conversations in order to ascertain a specialized method of execution or unimpeachable level of access within the level. It’s very game-y in concept, but Hitman makes no qualms about being a game; in fact, the way it utilizes Opportunities and other mechanics play into being a game, and find ways to subvert your expectations and understanding of the game’s rules.

Though you can just as easily take out a target with a rifle, a knife, or garrote, Opportunities are the highlight of Hitman’s experience. They offer chances to drop ornamental moose on a mark’s head, to poison a drink or to blow up an unsuspecting showman with his own fireworks. Some of the best are even well-hidden, like the opportunity to kill one mark by shooting a cannon at his plane as he escapes. Hitman rewards repeated assassination attempts, and encourages you to play differently each time, using different tools and approaches that you earn by completing different level-specific challenges.

These gained tools and points of entry are extremely helpful when tackling the wide variety of extracurricular content for each map. Challenge levels, made by both the IO team and the community, allow you to hunt new targets in pre-existing levels, and can up the difficulty by forcing you to eliminate them with a certain approach or while wearing a specific disguise. Elusive targets are the most lively aspect of the living-game model HItman uses, placing time-sensitive targets for players to hunt, with only one shot for success. Fail to complete the mission, or forget to play it within the allotted time window, and your target escapes forever.

The added content, especially from the community, adds a fair amount of variety to the mix, but also highlights some of Hitman’s flaws – namely, its rigid target structure. While each map’s primary, story-based targets have a wealth of opportunities and unique methods for assassination, the community targets have to work within the bounds of their specific routes and level limitations. Elusive targets can subvert this, but the community maps often lacked the ingenuity and clever design of the IO-crafted missions, simply due to creation limitations.

Each episode is absurdly deep and well-crafted, as we’ve covered in past reviews of some of the season’s entries. In evaluating Hitman (2016) as a whole though, the question becomes a little more complicated: does it stand on its own as a whole, now that every piece is available at once?

Part of the allure of this first season was the episodic release structure. What sounded like an ill-advised idea became the perfect trickle, encouraging exploration and experimentation. If these six pieces had released all at once, most players would have been less incentivized to spend time in each episode, finding the subtleties and odds and ends locked away in corners, and could possibly dismiss it.

Standing on its own, though, the 2016 iteration of Hitman is a return to form for the series. Each level feels full and dense, layered with chances, yet the focus remains on that travel from point A to B: receive target, kill target. There isn’t much variation in end objectives (save one surprise), but in Hitman, the journey is more important than the destination.

Every mark handed to 47 will be killed, but it’s your job to write out the five W’s and an H. From a bell tower with a sniper rifle, in the kitchen with rat poison, in the library with a candlestick…. Well, I’m still looking for that opportunity, but hopefully I’ll find it soon. Hitman is about the process, the interaction of an alien presence with an established world and how well-orchestrated attempts can almost always backfire, lending to improvisation and a lot of soda cans lobbed at unsuspecting guards’ heads. Absurd but meticulous, bespoke but open to interpretation, Hitman is the best argument for episodic adaptation, and one of the series’ best.

Stealthy disguises lead into explosive moments of improvisation. Best-laid plans come to fruition through opportunities, and carefully timed, critical moments mean the difference between a master stroke and a quick death. The 2016 Hitman offers the best of its kind, with an episodic structure that clicks, sandbox playgrounds to pick apart and brilliant design and presentation on all levels.