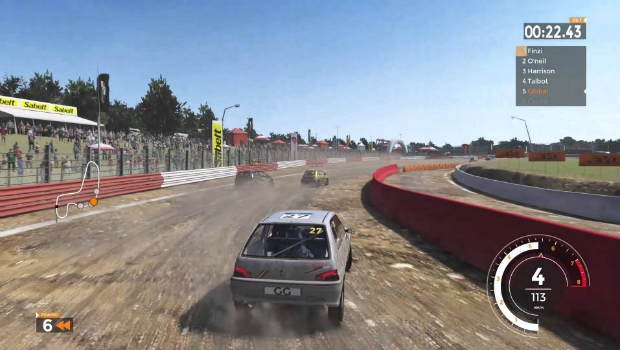 Rally car racing is a strange motorsport event, representing the middle ground between multi-car racing events and a simple time trial.  Sebastien Loeb is one of the very best to ever participate in the sport, and his story and likeness are the basis for Sebastien Loeb Rally EVO, the latest rally racing title from Milestone S.r.l., makers of the World Rally Championships and Moto GP series.

SLR EVO has a solid focus on the two-man team dynamic of Rally Car events, and makes an incredibly novel, hilarious, and surprisingly “true-to-life” attempt to simulate the dangers of poor driving.  While not always pretty to look at, these two dynamics make for a very difficult and unique racing experience.  When the difficulty levels are pushed to their very limit, SLR EVO can provide hardcore racing game fans with a top-tier challenge.

SLR EVO is, at it’s core, a very basic racing title.  You start by picking a team name and design, and then you’re given your first vehicle.  Through races in your official career, and any number of practice or exhibition races, you build your profile up from rookie racer to legend over time, amassing great wealth and vehicle assets along the way.

Rally racing is the sport at hand, so courses are typically end-to-end as opposed to a connected “laps” course.  There is a limited number of rallycross races that are more traditional, meaning lap circuits with other drivers simultaneously competing.  The courses are spread out by location, and each has a different layout and road type, meaning you’ll be driving cross terrain as well.

Typical races are singular events, meaning it’s just you out there on the course running against the times of other drivers.  In lieu of a course map, the game gives you a co-pilot who uses a series of “turn grade” codes and other warnings to help you navigate through the course.  This is vital to learn, because otherwise you’ll find yourself unwittingly running off the side of a cliff.

In addition to the standard career and exhibition races, there is also a mode where you are able to play through the career of Sebastien Loeb himself, racing his signature moments and learning about his story as you move along.  Not vital in any way, and certainly optional, this game mode is really here just to inform the player on whom the title gentleman is.

SLR EVO does stand out in two major ways, one exceptional and one less so.  The former is in the game’s wide range of challenge.  Many other racing games, in specific example the Gran Turismo series, has a flaw where AI drivers just aren’t very competitive even on the most strenuous of user settings.  SLR EVO does not suffer that flaw.

The game can be as easy as you want it to be with all kinds of guides and assists, and infinite use of this game’s version of the “rewind” function, but turn all of that off and crank up the AI to the max, and the game completely turns on it’s head.  It is a hard thing to describe without you playing against the driving AI, but the lines they take and the way they are able to “block” you from moving up a position is really impressive.  The challenge never feels cheap, and the game forces you to stay honest as well, penalizing you for cheating on the course.

The latter, and perhaps signature way that the game stands out, is in the crash and collision mechanics.  While weirdly specific, it bears mentioning that this game manages to amalgamate the most realistic crash mechanics that I’ve ever been subject to with the most silly and unrealistic visual representation of said crash.

Racing games have always struggled with this need to be true to life (even back in the arcade days), counterbalanced with the fun killing factor of crashes and collisions.  SLR EVO does a novel job of making their collisions realistic and violent, which means if you hit a wall doing 75 and bounce off, you’re going to lose control of the vehicle and potentially flip.  That’s when things get silly.  The car just kind of twirls and bounces like a balloon, and then everything is hunky-dory.  The whole experience makes it feel more like a matchbox car rather than a true racer.

The depiction of the races themselves is pretty nice, but this is not the most detailed game I’ve ever played.  A lot of the assets that make up the race’s scenic periphery is slap-shod and half-finished, which makes for an often very blocky scene.  While certainly not terrible to look it, it just doesn’t have the smoothness you’d expect for a modern title. That said, there are a series of races ran on Pike’s Peak, and that experience visually stood out as one of the most spectacular I had seen in a racing title.  It manages to really place you in the driver’s seat, so to speak, and makes you feel all the digital majesty and anxiety you should feel scaling a mountain at breakneck speeds.

Sebastien Loeb Rally EVO is a solid racing game that offers a mostly basic racing experience with a few unique twists. Rally-style racing with a co-pilot navigator proves to be both fun and challenging, but with an incredibly silly collision mechanic, the game does lack a little in immersion and realism. This game could have been the very best toy car racer ever created, but as- is, Sebastien Loeb Rally EVO is a decent racer that I’d recommend particularly to seasoned racing game fans looking for a real challenge.

Patrick Rost has been with Gaming Trend since 2013. At first focused on sports coverage, Patrick has gone on to cover a wide range of games and other products for the website. Outside of Gaming Trend, Patrick writes and records music, grinds perpetually in Elder Scrolls Online (PS4), and lives day to day with his two dogs, Bob and Stella.
Related Articles: Sébastien Loeb Rally EVO
Share
Tweet
Share
Submit