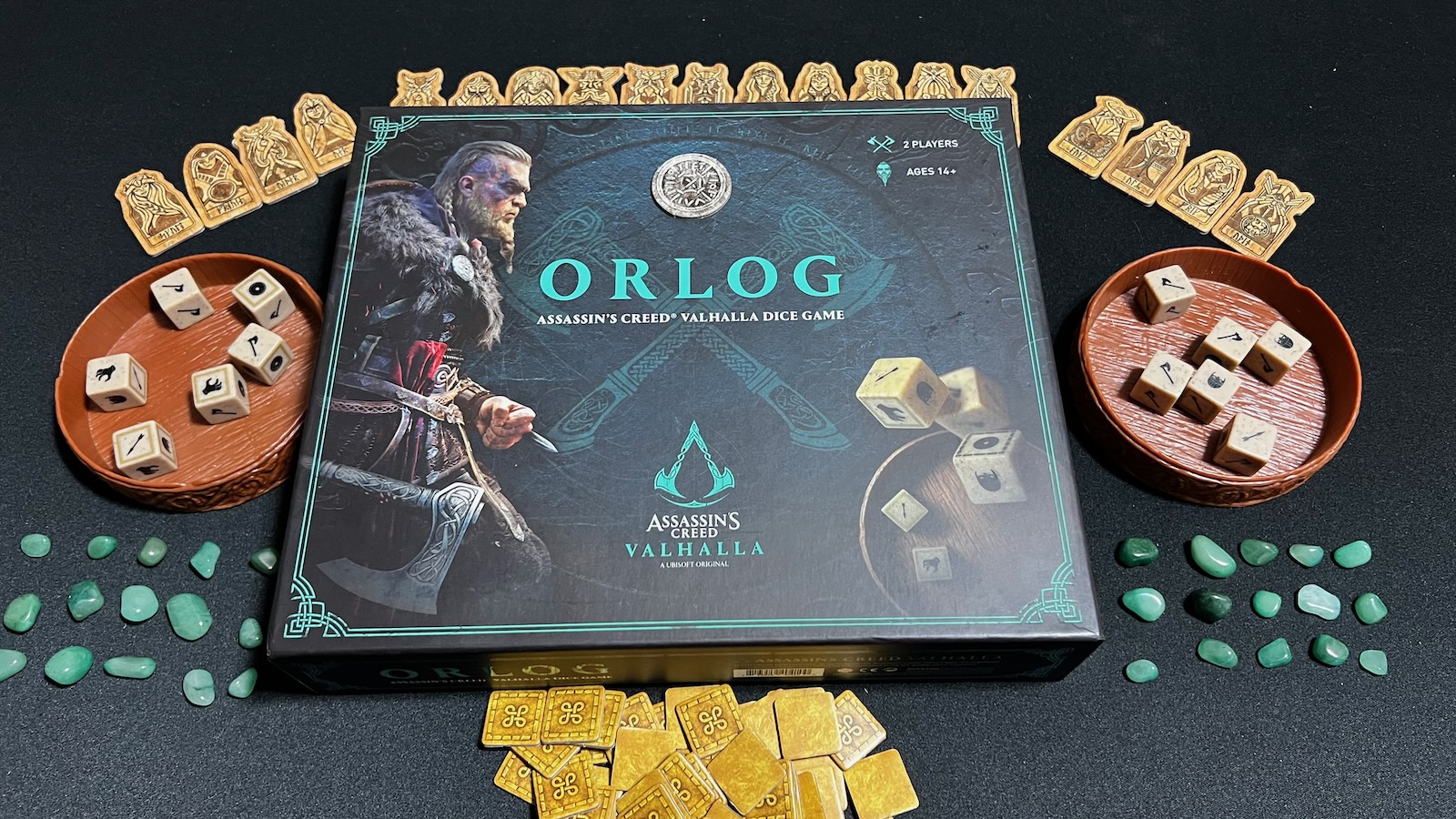 When Vikings are taking a break from raiding coastlines, pillaging villages, and relishing in their spoils, what better way to wind down than with a little dice rolling fun. Now if you’re looking for traditional Norse and Saxon historical gaming, you won’t get very far as Orlog comes from the Assassin’s Creed line of video games.

Created for the Assassin’s Creed: Valhalla video game from Ubisoft in 2020, Orlog can be played in taverns found in towns throughout the expansive open world. As the player defeated the different NPCs they encountered, they would increase their variability of the game by collecting special god tokens. Orlog was brought into the tactile world through a successful Kickstarter campaign in July of 2021 and is now available for purchase to the general public. 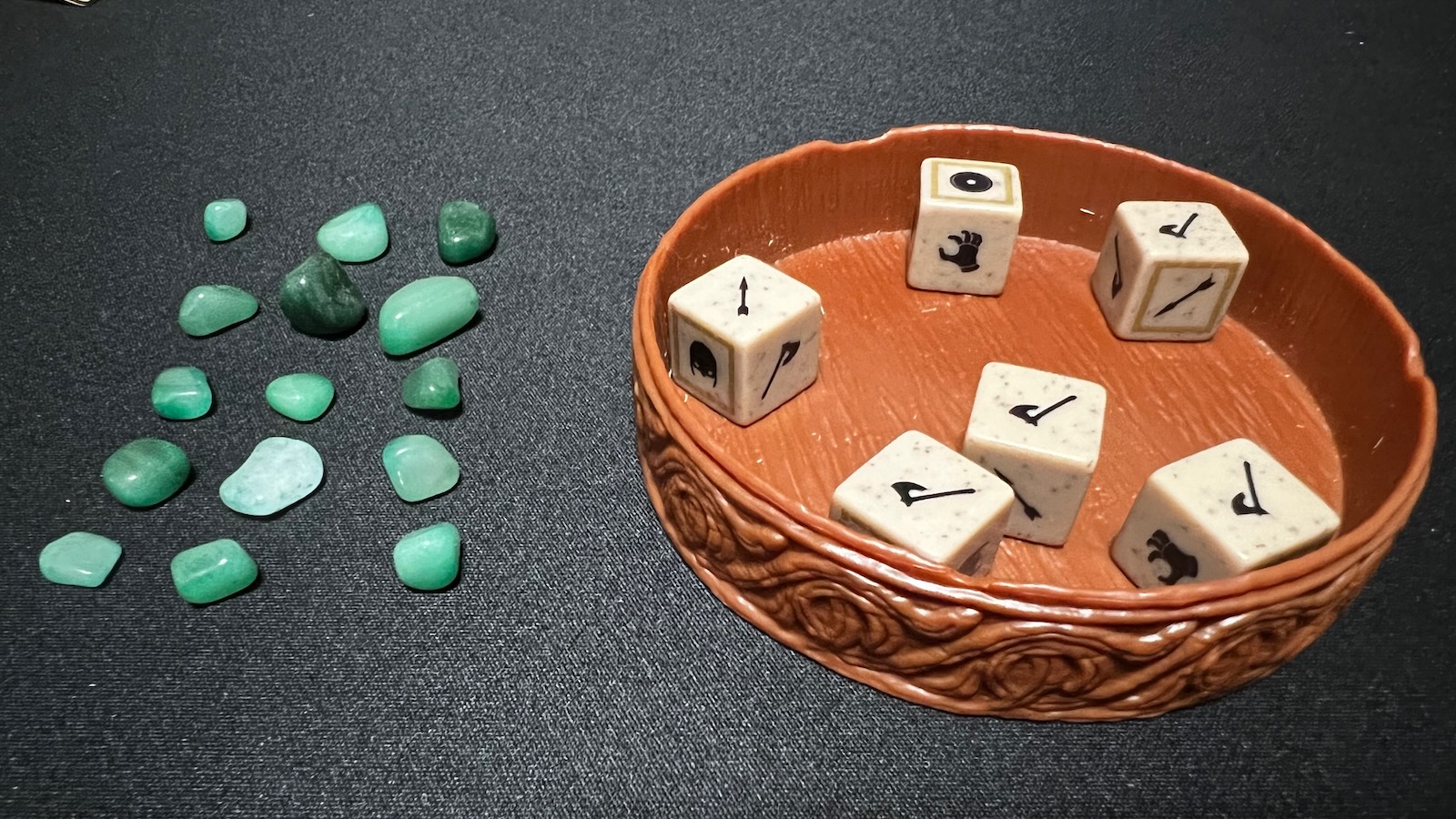 Player set up with health chips and dice in a plastic bowl.

Orlog pits two players sitting across the table against each other. During the set-up, each player takes a wooden bowl, six special six sided dice, and 15 stone health counters. In a casual game, players will select three god favor cards from a supply of twenty to help them throughout the game. A general supply of god favor tokens is set to the side of the play area. A coin is flipped to determine which player will start the game. The goal of the game is to eliminate the other player by taking their stone health counters to zero.

The game is played over rounds, each containing three phases. In phase one, the Roll phase, players will roll their dice into their bowls and choose which dice they would like to play. The dice show one of 5 faces:

Some dice faces are surrounded by a brown border that gains players god favor tokens during a later phase. Players are allowed to roll their dice up to three times, choosing which dice to keep and which dice to reroll. After the third roll, all dice are put into play. 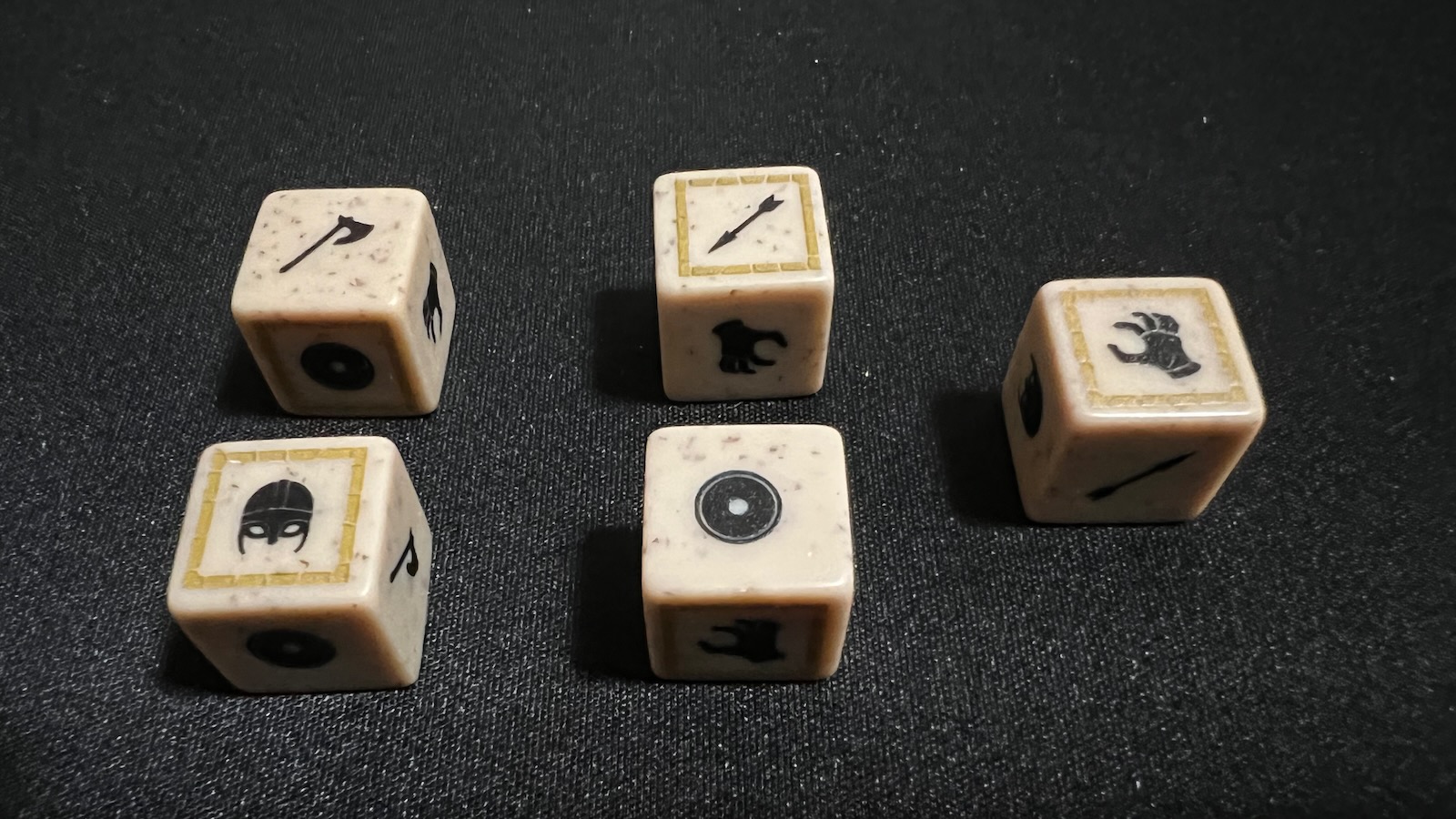 In phase two, the God Favor phase, players may invoke the favor of one of the three god cards they chose during setup. The favors of the gods vary from direct damage on their opponent, to healing the active player, to increasing or decreasing the effects of dice rolled. Each god favor is paid for in god favor tokens and has three levels of intensity; each level costing more tokens but gaining in power. Favors are invoked at different times during phases two and three and a priority order is given when two effects are played at the same time. 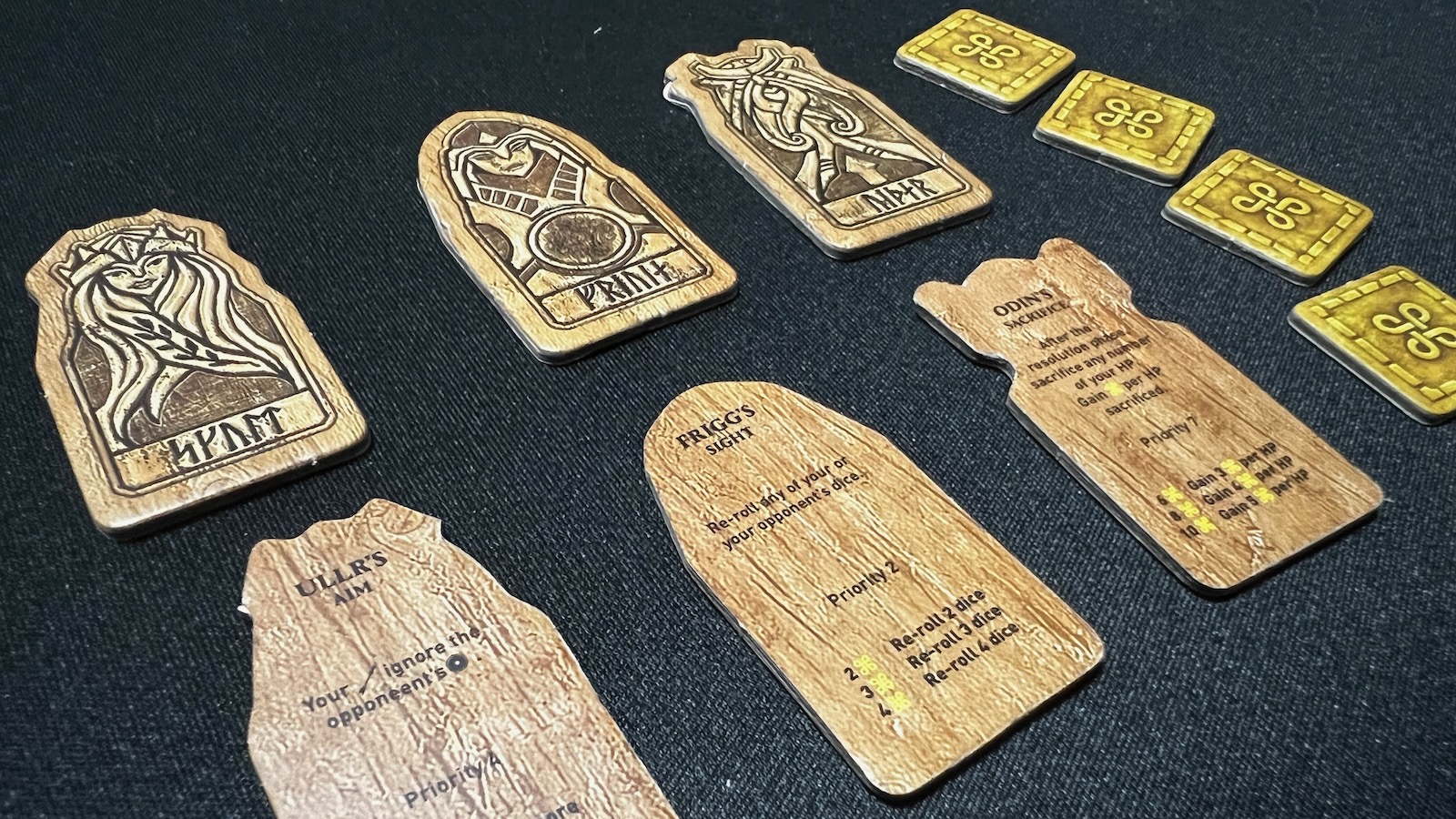 Phase three, the Resolution phase, completes the round. First, each player gains god favor tokens based on the number of square borders showing on their dice. Next, the melee and ranged attacks are compared to the helmets and shields. Any unblocked attacks result in one damage per unblocked die. Finally, each hand revealed allows a player to steal a god favor token from another player. If any god favors go into effect after the resolution phase, they are then carried out. If no player reaches zero health counters, the players switch turn order and continue the game. 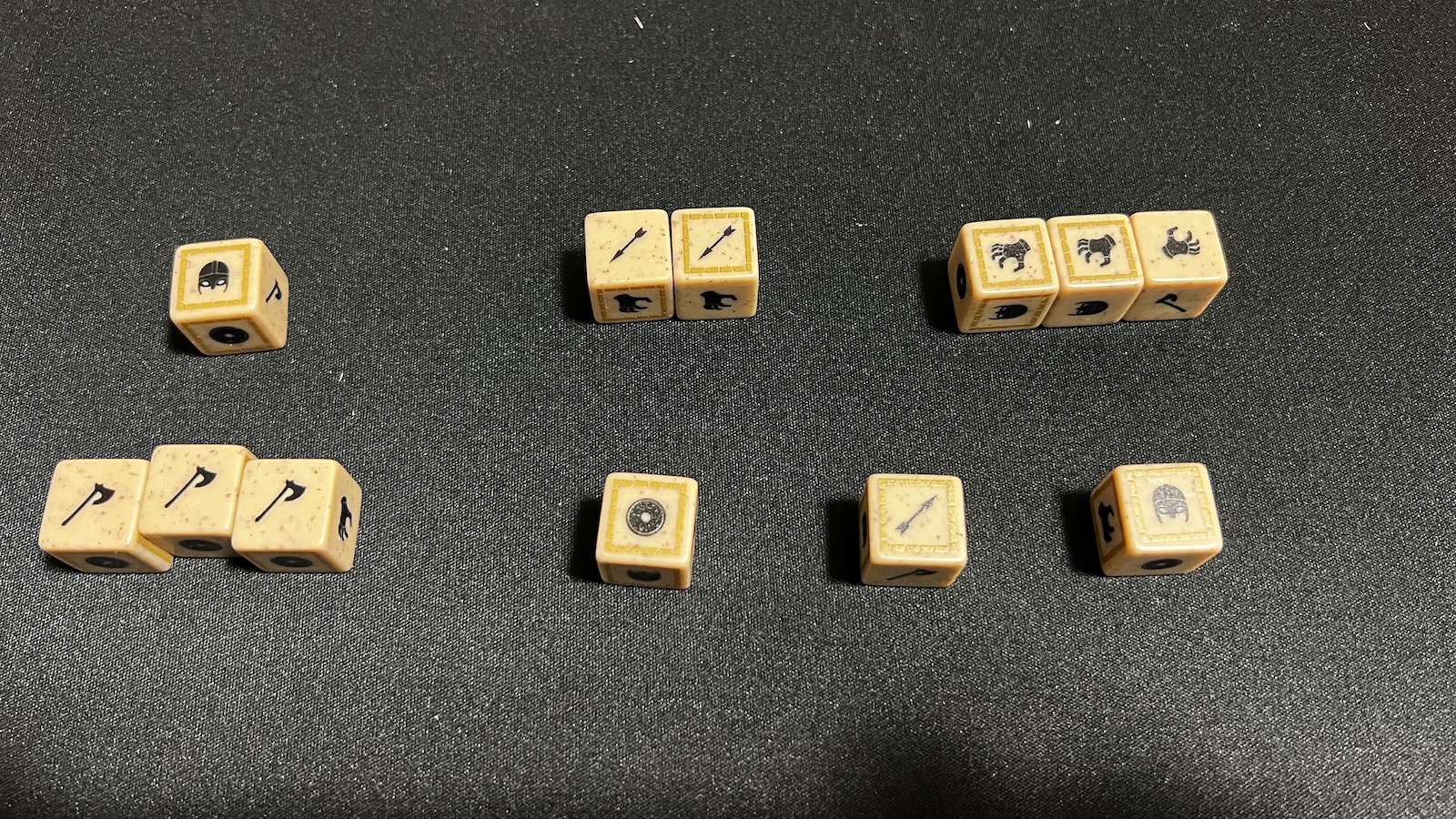 An example of the resolution phase

The gameplay of Orlog is fairly simple to pick up. As someone who has played the game through the video game, it was a very faithful port to the tabletop experience. If someone was to pick the game up blind, however, the rule book is very sparse and can leave the players with questions. The rulebook does provide a leveled playing set-up, to help scale the game to newcomers and veterans alike. Also included in the box is a God Favor Card guide. Being a fairly simple game in its basic mechanics, there are a number of options and strategies to try out. Players can take a very defensive strategy to mitigate the damage taken by attacks or can be very aggressive to overwhelm their opponents defenses. Other players may just take as many god favor tokens as they can to overwhelm their opponents with supernatural powers. One thing the table top version lacks is the adventure of seeking out new Orlog players and building up your deck of God Favor Cards over time. With all cards available to all players, it can be difficult to decide what cards to use in a game and loses the adventure of working your way up the food chain. The game is still a fun and quick game that would be a great filler in a heavier game night. 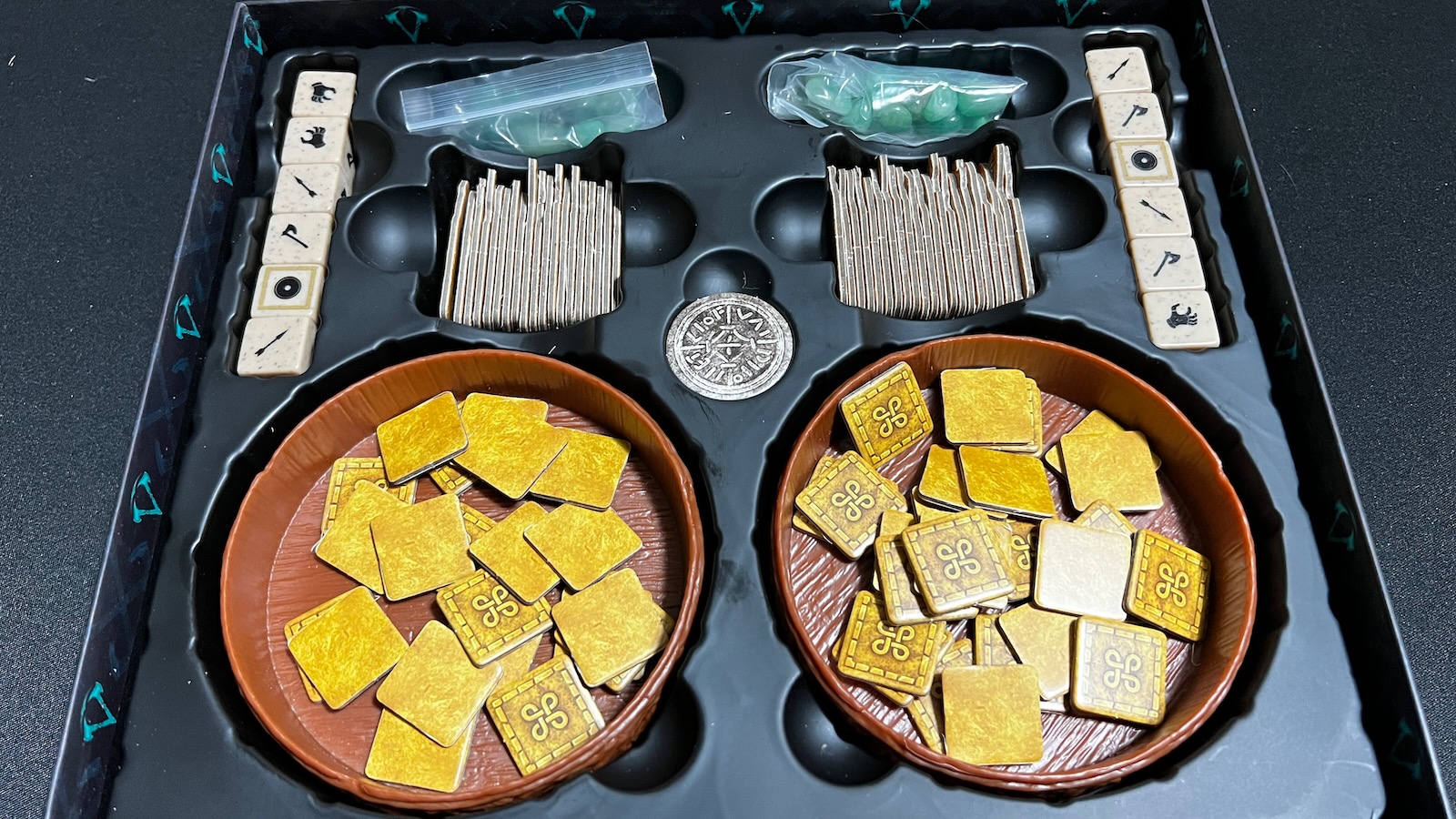 Game components in the box insert

Something that stands out to me is a well designed insert. Everything the Orlog box has a place and the game travels well. However, the production quality of the game was a bit disappointing. The dice were fine and the stone health markers were a nice touch, but the rest of the components were a bit lacking. The starting coin that determines the first player is the only one of its kind in the box and could have easily been a metal coin. Instead, we get a cardboard coin that feels like a cough could blow it out of the air. The God Favor cards have great and unique artwork on the front, but the printed instructions on the back are difficult to read with the tiny font against the faux wood grain artwork. The same tiny font is continued through the rulebook and player aides. The “wooden” bowls are made of plastic and can grate the ears when the dice are rolled into them. A felt liner on the bottom or actual wooden bowls would have upgraded this just a hair. After some further research, most of these components were upgraded in the kickstarter stretch goals or available for purchase as an add-on. The $40 price tag for the quality of the components in the retail box just seems to be out of balance. 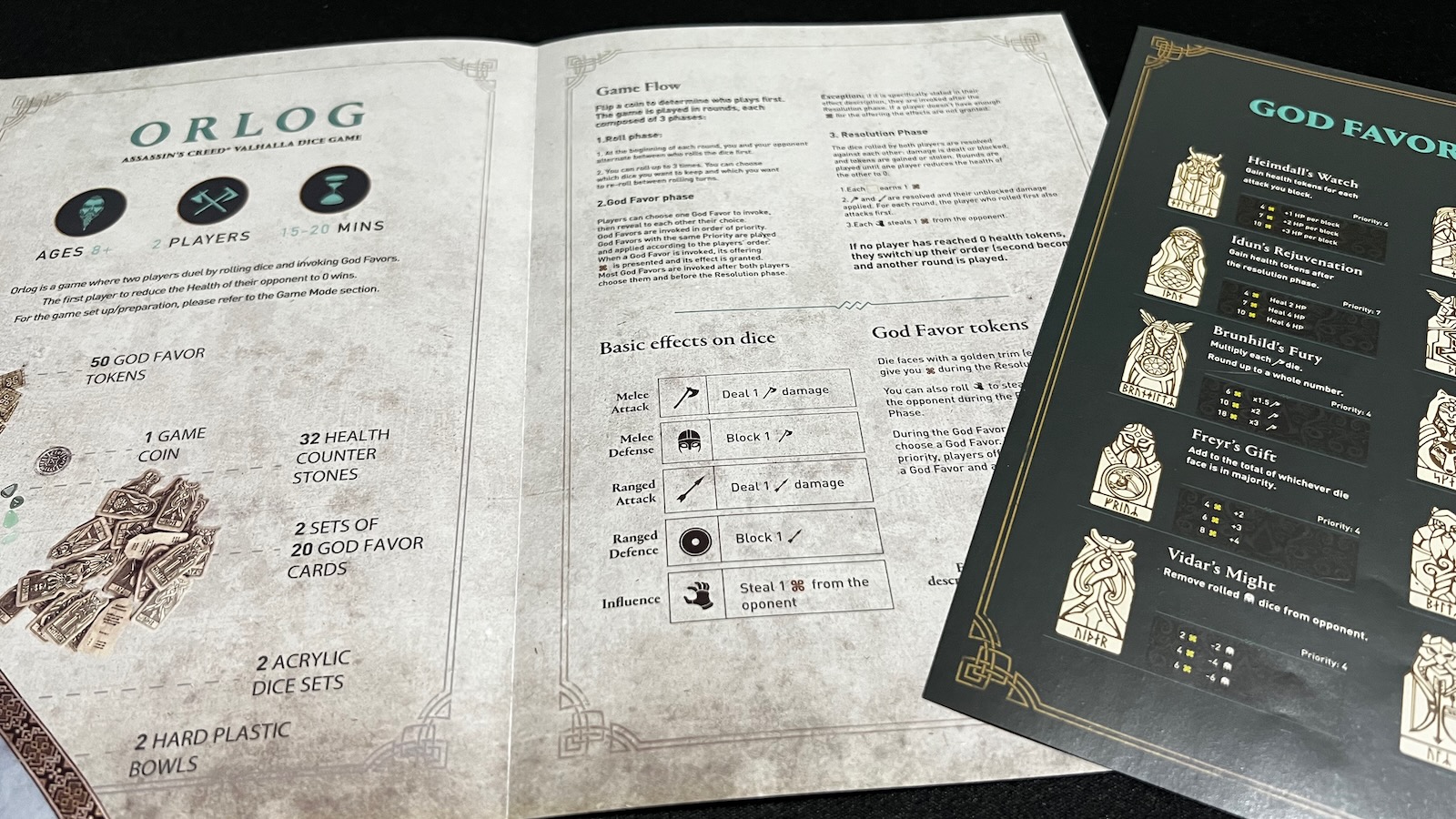 Overall, the game isn’t bad by any means, but it does seem to be hitting the nostalgia factor for fans of the video game without the quality it deserves. The quick gameplay and teaching make this a fun head to head experience, but loses the adventure of seeking out opponents and building your strategy around minimal resources. I think the publishers missed an opportunity to include a solo adventure where players build their God Favor deck from one card to twenty included in the box by playing against some automa players.

Orlog is a quick head to head dice rolling game that will appease fans of the video game source material. The components included are a miss but a good filler for game night.