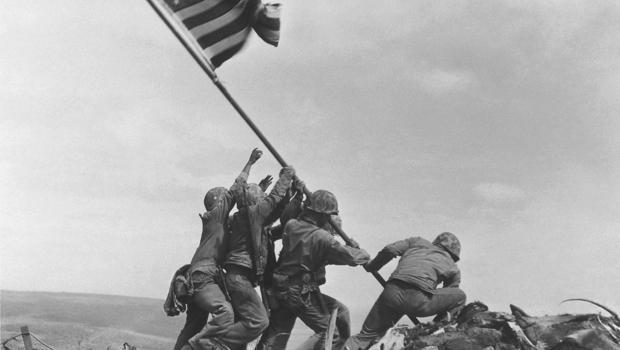 This may be true, unless you’re talking about video game war, in which case war changes every year. From the Cold War to the Vietnam War, from modern war to advanced war, and from Battlefield 2 up to Hardline, every new year sees battle in a different decade, country, and political climate. But at one point video game war was most popularly set within a six-year timeframe: World War II.

We’ve compiled a brief history of shooter games set during World War II, with notes on each, touching on different milestones the genre has had over the past three decades.

In what is considered to be the first World War II-set game, Muse Software’s Castle Wolfenstein began a genre and series that would not soon die out. Created by Silas Warner, the top-down, stealth-based adventure game let players explore the titular Castle Wolfenstein, looking for top-secret war plans while fighting and evading Schutzstaffel, or “SS” guards, all the while rising through the ranks from a “Private” to a “Field Marshal.” The game offered a variety of different way to play, including killing guards, sneaking past them, or even impersonating them by stealing and donning one of their own German uniforms.

The third entry into the Wolfenstein series, Wolfenstein 3D revolutionized first-person shooters and video games as a whole. Developed by id Software and designed by John Romero, who would later work on the equally important Doom, the game follows the American spy William “B.J.” Blazkowicz as he escapes Castle Wolfenstein, fighting through legions of Nazi-created undead mutants, and ultimately kills Adolf Hitler, who is outfitted in a robotic suit and equipped with multiple chain guns. Grounded, it is not.

Though not the first in the first-person shooter genre, Castle Wolfenstein helped pave the way for the fast-paced run-and-gun type gameplay that would influence other id games like the aforementioned Doom and the Quake series, as well as nearly every first person shooter game to come.

After seeing his son play the 1997 first-person shooter GoldenEye 007, director Steven Spielberg pitched his ideas for a first-person shooter set during World War II to his then development team, Dreamworks Interactive. At the time, he was working on Saving Private Ryan, an extremely violent movie. Spielberg’s vision for this shooter was his way of sharing his interest in WWII with a younger audience that may not have been able to see the 1998 war drama.

What came was Medal of Honor, released for Sony’s original PlayStation. Putting players in control of OSS Lieutenant Jimmy Patterson towards the tail end of World War II, the game sent the character to France, Germany, and Norway to destroy enemy weapons, reclaim valuable art stolen by the Nazis, and infiltrate German fortresses.

Medal of Honor released to critical praise, launching both the Medal of Honor series, which has continued for over a decade with over 15 different games, and the popularity of the World War II-based first-person shooter.

The third in the Medal of Honor series, and the first on PC, Allied Assault featured a more cinematic story. Developed by 2015 Inc., and co-written by franchise father Steven Spielberg, the game borrowed heavily from his 1998 film Saving Private Ryan, including a level that has main character Lieutenant Mike Powell deployed to Omaha Beach on June 6, 1944 to fight during the infamous Allied invasion of Normandy. Allied Assault’s emphasis on being cinematic would be imitated by later franchises trying to create more of a simulation of war, rather than a go-it-alone type experience.

Being the first Medal of Honor on PC, it was the first and only game in the series to feature expansion packs. The expansions, Spearhead and Breakthrough, gave players access to levels based on the 1943 Allied invasion of Sicily, the 1944 Battle of Monte Cassino, and the 1945 Battle of the Bulge.

Notably, members of 2015 Inc. went on to form the studio Infinity Ward, whose first game was Call of Duty.

Developed by Digital Illusions Creative Entertainment, or “DICE,” Battlefield 1942 was the developer’s first foray into the first-person shooter genre. The game gave players a variety of different playstyles, allowing them five different military classes to play as in all of the major World War II theatres, during real battles of the time.

Though 1942 featured a single-player mode, its emphasis was in cooperative multiplayer, accessible via internet or LAN connections. Battles encouraged players to work together to defeat opposition, using either weapons or vehicles, both on-land and in-air. At their biggest, multiplayer matches could feature 64 players, with 32 people on each team. This emphasis on multiplayer would become a staple in the genre, as nearly all military-based action games now ship with a multiplayer mode that is arguably often more popular than its respective single-player campaign.

Battlefield 1942 also spawned a large modding community, which tweaked gameplay and even changed the game’s setting, such as the Battlefield 1918 mod, which took place during the first World War. Mods are still being updated and created for the game, 13 years after its initial release.

The game was the first in DICE’s long running Battlefield series, which saw its most recent release during 2015 in the form of Battlefield Hardline.

Originally codenamed “MOH Killer,” Call of Duty was meant to be more of a simulation of actual war combat than other video games in the genre, requiring players to stay with their squad rather than fight alone, as seen in games like Medal of Honor.

Players were given control of three different characters: one American, one British, one Soviet, each with their own respective campaign and story. Players were tasked with such missions as defending against German attacks, destroying anti-aircraft guns, and battling in Berlin, effectively ending World War II. Call of Duty was the first in the series to feature the Russian City Stalingrad as a level, which would be featured in many subsequent World War II set Call of Duty games. Players were tasked with getting on-shore, finding a weapon, and fighting their way to Russia’s Red Square. A memorable moment, the scene opens with a speech, explaining there’s no turning back, and traitors will be executed. Once on the beach, the battle never gives players time to breathe as bombs go off around them and bullets fly overhead.

At its time of release, Call of Duty was a spectacle, a high-octane ride with action players hadn’t seen before, setting a precedent for the thrill-ride later entries would become. The game received critical praise and numerous “Game of the Year” awards, and spawned a highly successful franchise that has long since left the World War II setting, with the latest installment, Call of Duty: Black Ops III, taking place during 2065.

A prequel of sorts to the Black Ops story arch, Call of Duty: World at War is the last game in the franchise to be set during World War II. Telling the stories of both a US marine, Private C. Miller, and a Soviet soldier, Private Dimitri Petrenko, the game puts players on the frontlines of historic battles, such as the Battle of Berlin, Battle of Seelow Heights, and Battle of Okinawa, and lets them end war in Europe, as well as drive back Japanese forces in the Pacific. It was the second game in the Call of Duty franchise to receive a Mature ESRB rating, the first being 2007’s Call of Duty: Modern Warfare, and featured a much more mature, violent story than its predecessors, something later Call of Duty games would adopt.

After taking a five-year hiatus from the 2009 release Wolfenstein, the most recent entry in the series, Machine Games’ Wolfenstein: The New Order, tells a tale set in an alternate history where the Nazis forced North America to surrender in 1948, ultimately winning World War II. Put back into the shoes of the series’ longtime protagonist William “B.J.” Blazkowicz, The New Order takes place in the 1960s as Blazkowicz attempts to save the world from complete Nazi rule.

It received a standalone expansion in May of 2015 in the form of Wolfenstein: The Old Blood, taking place in 1946, before the events of The New Order.

The New Order released to generally positive reviews and sold highly during its first several months of release, potentially showing a revitalized interest in the World War II shooter genre.

After decades of being the favorite setting for war-based shooter games, World War II has taken more of a backseat in recent years as franchises such as Call of Duty and Battlefield explore different eras of war of war, as well as its possible future. But, that’s not to say that they have completely disappeared, or won’t mount a comeback. Speaking to IGN, Activision’s CEO, Eric Hirshberg, said the possibility of World War II based shooters receiving another rise to prominence is “certainly possible,” explaining that the new innovations that lead developers to want to change time periods can also lead to a “what is old is new again” mindset. Time will tell.

“We are not retreating — we are advancing in another direction.” — General Douglas MacArthur