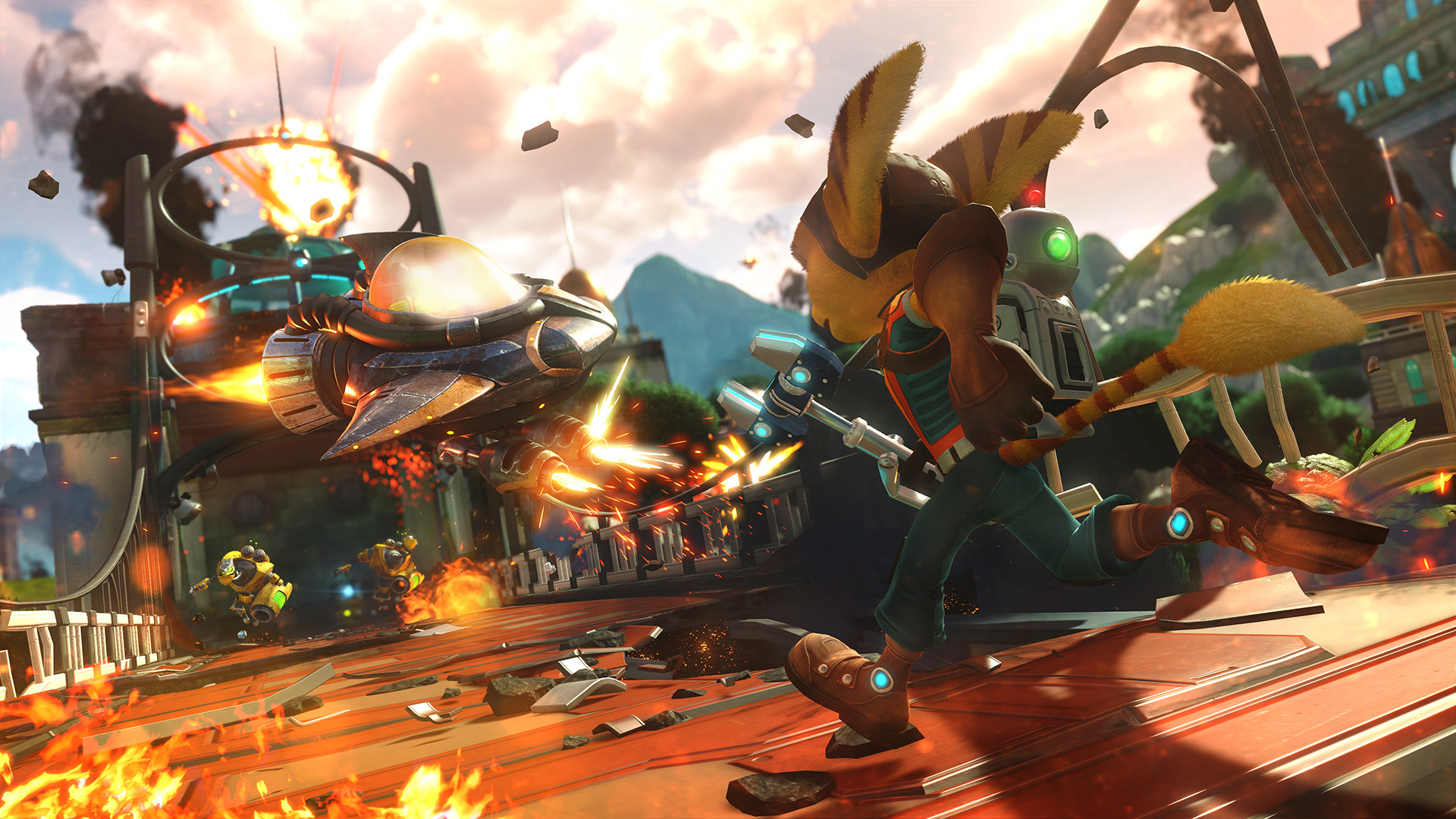 If you’ve played Insomniac Games’ original Ratchet and Clank for the PlayStation 2, then its remake (also named Ratchet and Clank) is going to fit like a pair of rose-tinted glasses with scratched lenses.

A game based on a movie based on a game, Ratchet and Clank feels altogether familiar and fresh, adding new levels, weapons and bosses to the original worlds and characters. But it doesn’t always update where it should; self-referential, colorful and fun, the game’s levity makes it stand out, but a vibrant reskin doesn’t necessarily cover mechanics and design that feel noticeably aged.

Ratchet and Clank stars, well, Ratchet and Clank, titular heroes of, well, Ratchet and Clank. After escaping his factory of origin on the planet Quartu, Clank crashes into the path of Ratchet, a lombax with dreams of joining the ranks of the Galactic Rangers and their star, Captain Qwark. Clank tells Ratchet of Drek Industries, which looks to uproot its operation on Quartu and build itself a new planet by dismembering existing ones. Together Ratchet, Clank and the Galactic Rangers travel from planet to planet in order to stop Drek Industries, and its head Chairman Drek, from its plans of galaxial domination.

Highlighting the game’s story is a well-acted, funny script that often breaks the fourth wall and references the fact that Ratchet and Clank is a reboot of a 14-year-old game, and a tie-in to an upcoming film also based on a 14-year-old game. Cutscenes look great, often comparable to a modern CG film, and breathe new life into old characters.

And it can’t be understated just how good looking this game is, almost like a cartoon come to life. From cutscenes to in-game, Ratchet and Clank looks the way you remember its 2002 predecessor looking. Levels are bright and busy, with something constantly happening in the frame and each planet Ratchet travels to features wildly different climates, styles and locals. The visuals are a love letter to fans that look back at the original Ratchet and Clank game with nothing but nostalgia.

But once you’re given control of Ratchet, the game begins to feel off. The original Ratchet and Clank released in 2002. Sometimes this remake plays like it did too.

Most noticeably, aiming one of the game’s several weapons or steering vehicles feels stiff. Shooting lacks the finesse of current third-person shooters, putting Ratchet’s crosshair square above his head. I constantly found myself shooting and missing as my reticule wouldn’t quite go where I wanted it to. While there is an option to draw the camera close and aim above the right shoulder by pushing in the right thumbstick, doing so slows Ratchet’s movements to a crawl, leaving him more susceptible to enemies moving faster than him.

Multiple missions that put Ratchet in the cockpit of his airship also suffer from the game’s poor aiming, throwing several small enemies at you to fumble with. Additionally, these moments are difficult to control, tedious and slow compared to the rest of the game, which maintains a brisk pace.

Levels also run on the short side, where multiple objectives can be completed in under an hour without much of a challenge. Environments are linear, with few branching paths to explore and no real incentive to come back. Traveling from planet to planet loses a lot of its sense of purpose, as I was never in one area long enough before I finished my tasks and moved on. As mentioned, these levels are beautiful, but with no real reason to stick around, I didn’t always make time to smell the flowers.

One notable exception is the game’s boss fights. Though few and far between (there are only three major ones), the boss fights in Ratchet and Clank are large-scale, challenging and exhilarating — on par with the bosses in 2014’s Sunset Overdrive, also developed by Insomniac Games. These boss fights stand out compared to the otherwise bland missions and linear levels.

These shortcomings detract from a game that, at its core, is very fun. Platforming is solid and meleeing your way through rows of enemies feels satisfying as you watch hundreds of bolts fly in every direction. I enjoyed running around the levels, however short they may be, using Ratchet’s various upgrades and abilities to best the environments’ various terrains.

And that’s where Ratchet and Clank shines: its upgrade systems. Every time I got a new toy to play with, I was thrilled. Be it a jetpack, new suit, weapon or upgrade to any or all, I couldn’t wait to try out whatever gadgets came next. And, to my enjoyment, there’s a lot of toys to play with.

The weapons, though hard to aim at times, are very imaginative and plentiful. From the Mr. Zurkon, which deploys a flying robot which aids in combat, to the Groovitron, which causes enemies to break out in dance, leaving them vulnerable for attack, each of Ratchet’s weapons has its own unique advantages and skill-trees to explore. My issues aside, I constantly found myself weighing the pros and cons of upgrading a gun’s ammo capacity over widening its area of damage, usually satisfied with the outcome.

There is a lot to love in Ratchet and Clank, but it also comes with its fair share of headaches. Levels are short and linear, and leave little desire to stay on them any longer than you have to. While weapons are interesting and unique, they often come with the added weight of being hard to aim. It’s beautiful, funny and fun, but also, short and stale.