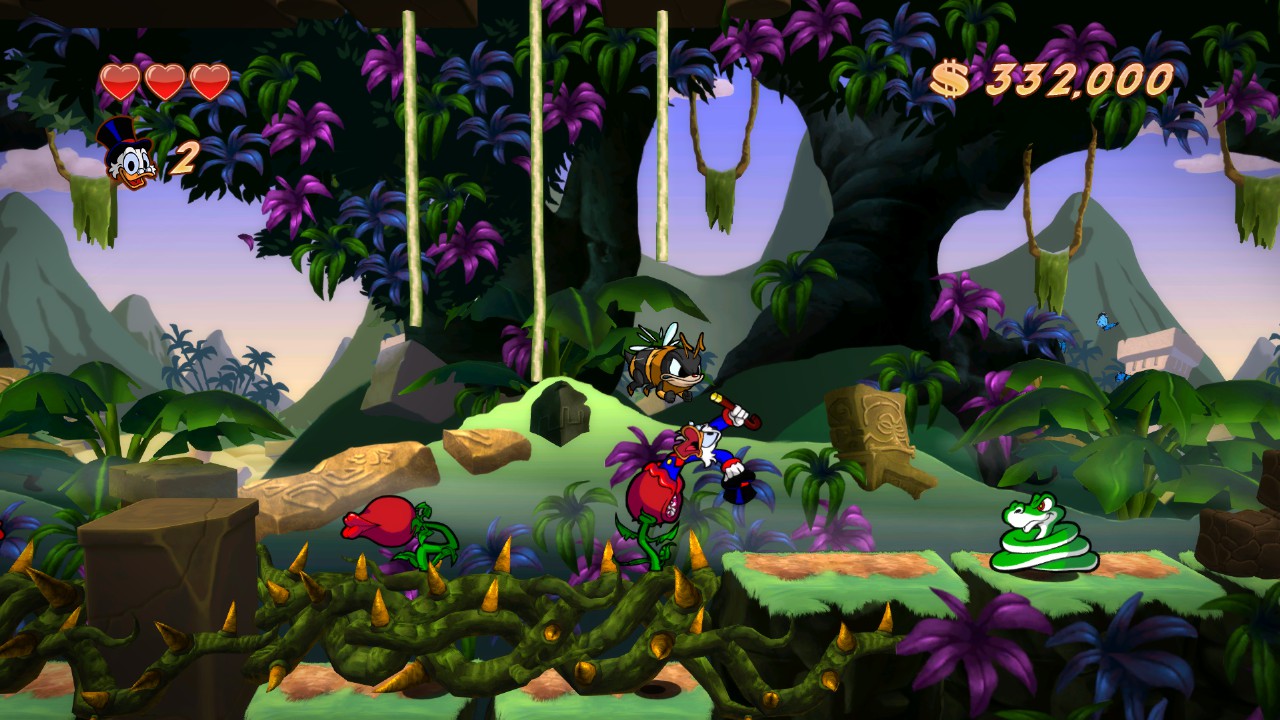 While I love how easy it is to buy games nowadays, I’m always pretty wary about the state of digital storefronts. From the closure of the Wii Shop Channel to the delisting of games once the developer’s license expires, it always breaks my heart to see a game unavailable. In the case of the latter, I was lucky enough to grab a copy of Wayforward and Capcom’s DuckTales Remastered from Steam before the game went away for good; I also scooped up a physical PlayStation 3 version and downloaded the Wii U one (you know, just in case). I didn’t grow up knowing much about the DuckTales franchise (while I do love the 2017 reboot, I’ve only watched a few episodes of the original), but perhaps it’s because of this that I appreciate the love and care Wayforward put in this product, even if it does have a few problems sticking with its old-school roots. 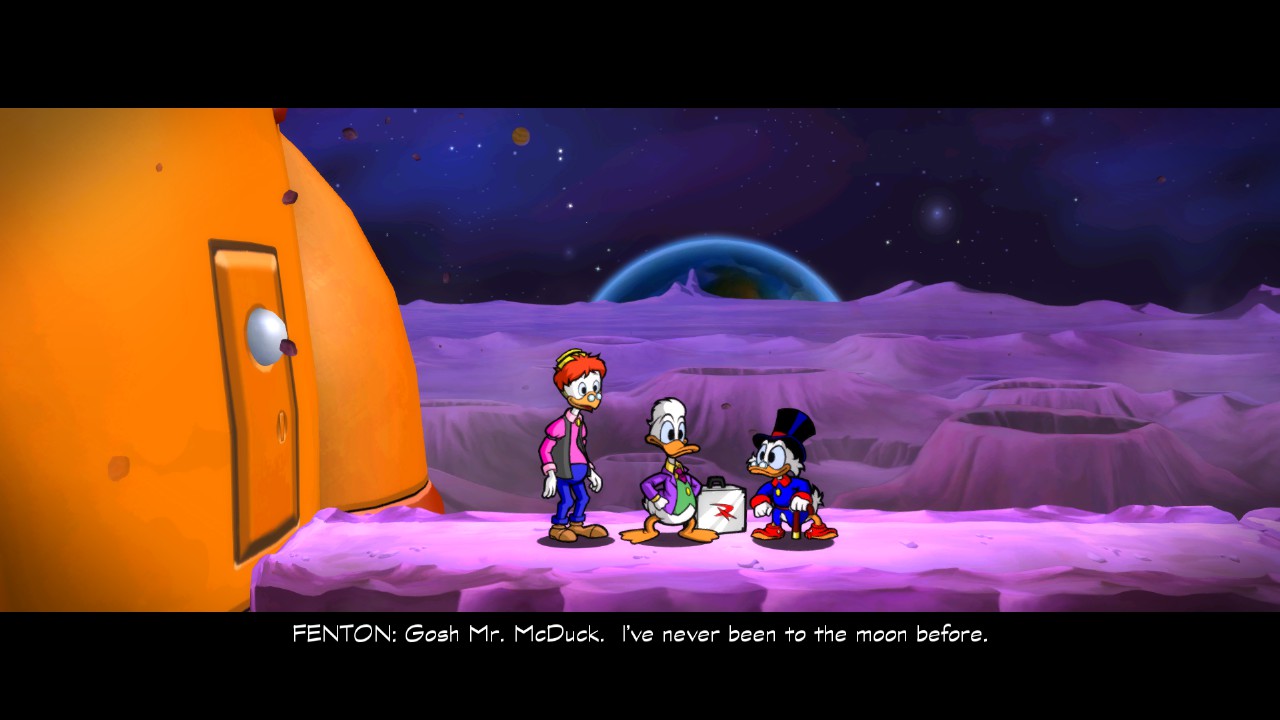 DuckTales Remastered is, as the title explains, a remaster of the 1989 game, which follows Scrooge McDuck as he strives to find five lost treasures after the bumbling Beagle Boys try to raid his money bin. Armed with his trusty cane, he, along with his nephews and other friends, travels the world as an explorer in order to obtain these valuable prizes. The game is a platformer-Metroidvania hybrid, where Scrooge explores a large level in order to obtain level-specific parts to advance to the boss, such as coins to access a temple or a key to activate a machine. Seeing as how I’m warming up to the Metroidvania genre nowadays, I saw this as a fun little challenge. Scrooge can use his cane to whack stones and chests, and can even use it to pogo jump over obstacles (which you’ll need to master on later stages). I’m not the first to make a Shovel Knight comparison here, but this move is pretty smooth and well done. I actually preferred using it over standard walking most of the time, it was that good.

Of note is the story content included in the game. It can get a bit too lengthy at times (there were times I just wanted to skip through some scenes, mainly because character expressions were limited), but the fact they got pretty much everyone from the original show to reprise their roles is something to marvel. Hearing the late Alan Young was pretty nostalgic in itself; for reference, while I didn’t catch much of the original DuckTales series, I did remember Scrooge McDuck performance on a lot of Disney specials. Sure, the story cutscenes can bog down the flow (or worse, act as filler to the under three hour experience), but I do appreciate the love and care of the cast’s performances. There are also a few added lines that make Scrooge a bit more sympathetic (such as his affection for his nephews over treasure or thinking that he’s too hard on side character Fenton), so I appreciated that. The graphics have undergone an overhaul as well, and I can see a Shantae-like animated style here. The game has 2D character models that are wonderfully animated in-game, even if the cutscenes feel static by comparison. Scrooge feels fluid in his animations, and it’s satisfying to hit enemies with the pogo stick cane. 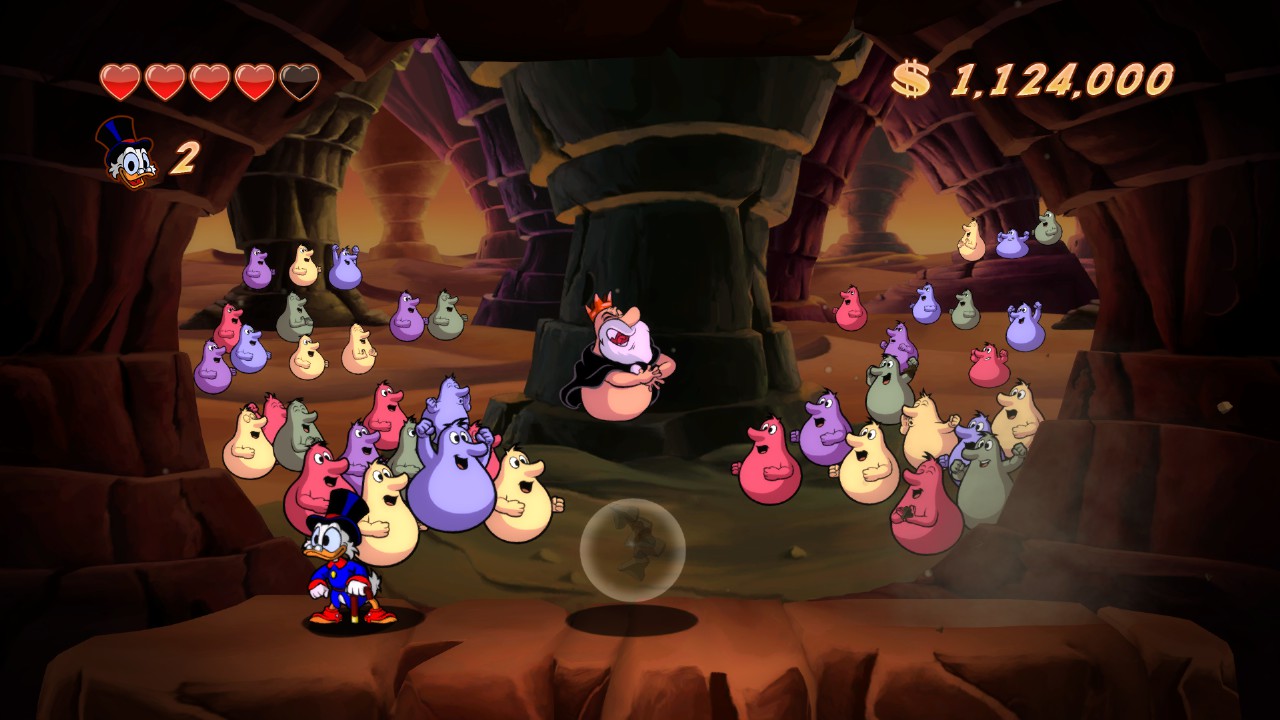 Initially, on normal difficulty, you can only sustain three hits before succumbing to dead protagonist syndrome, which makes the first couple of levels a bit tricky if you don’t know what you’re heading into. You can obtain more hearts throughout the levels to increase your max HP, so I found the game getting a bit easier over time.

That being said, avoid The Amazon as your first level. It’s this level that accentuates the shortcomings and design flaws DuckTales Remastered picked up from the old NES classics. The lives system is here, meaning if you end up dying too many times you’ll have to start progress over from the very beginning. I would say it’s fine, but there are a quite a few enemies that are annoying to deal with, especially when you’re trying to navigate bottomless pits. The Amazon (which is the first level you can select out of the five after the opener) has some really annoying enemies throughout the stage, from plants that you can’t jump on to little rodent savages that will spear you constantly. They are not so bad on their own, but paired with spiders you need to dodge as well it gets difficult. The pogo physics are perhaps at their worst here, since you need to make sure you’re jumping just right lest you hit a thorn or fall into a pit. It doesn’t help that enemies in this game spawn infinitely, so you’ll always have a huge monkey or bee in your way when you don’t want one. 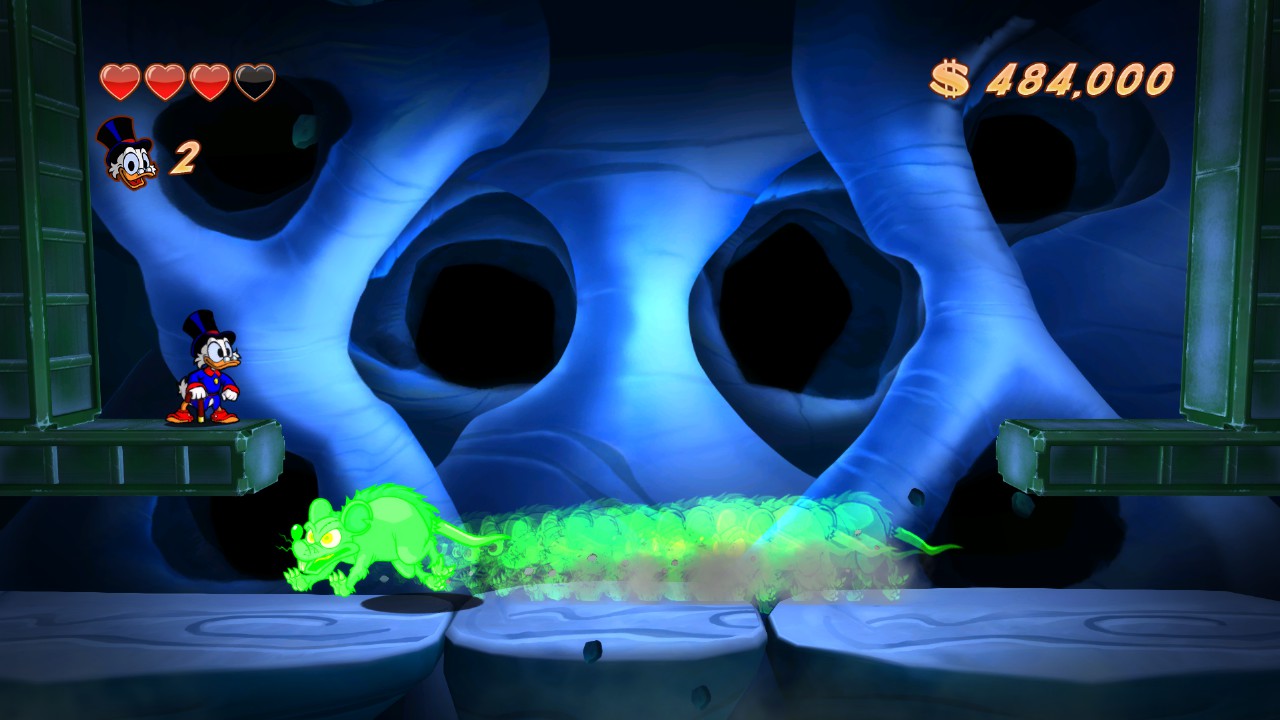 Since you can choose whatever level to start, I went with The Moon since… come on, it’s the moon. It’s also due to the fact that the associated song has been a meme for years due to its sheer awesomeness. I’m going to break for a bit to talk about the excellent soundtrack Jake Kaufman provided. I did listen to a few of the original versions, but the remastered soundtrack is amazing; there isn’t one bad track on it. From the remixed version of the DuckTales theme to the ominous sounds of the Mount Vesuvius track, each song is easily memorable and you’ll want to grab a copy of the soundtrack digitally. This brings us to The Moon remix, which is just amazing. It captures the exhilarating essence of the original while still having something new and unique with this version. The spaceship you have to explore is nicely spaced out, with enemies not being too spam-heavy here. The boss battle, in which you have to face a mutated rat, is challenging without being too cheap, and quite inventive as well. It’s my favorite level of the game, and I still have this version’s background music on repeat as of this writing.

While DuckTales Remastered is light on backtracking elements (you can’t even replay levels until you beat the game), there are a few things that encourage exploration. For one, you collect jewels that will allow you to purchase behind-the-scenes extra artwork between levels. As aforementioned, easier difficulties give you more opportunities to increase your HP up to eight if you can get a hidden heart container in each of the five levels.  Every level also has an encounter with Mrs. Beakley, who will give you some extra health pickups should you find her. All in all, I loved the Metroidvania-lite approach to platforming. 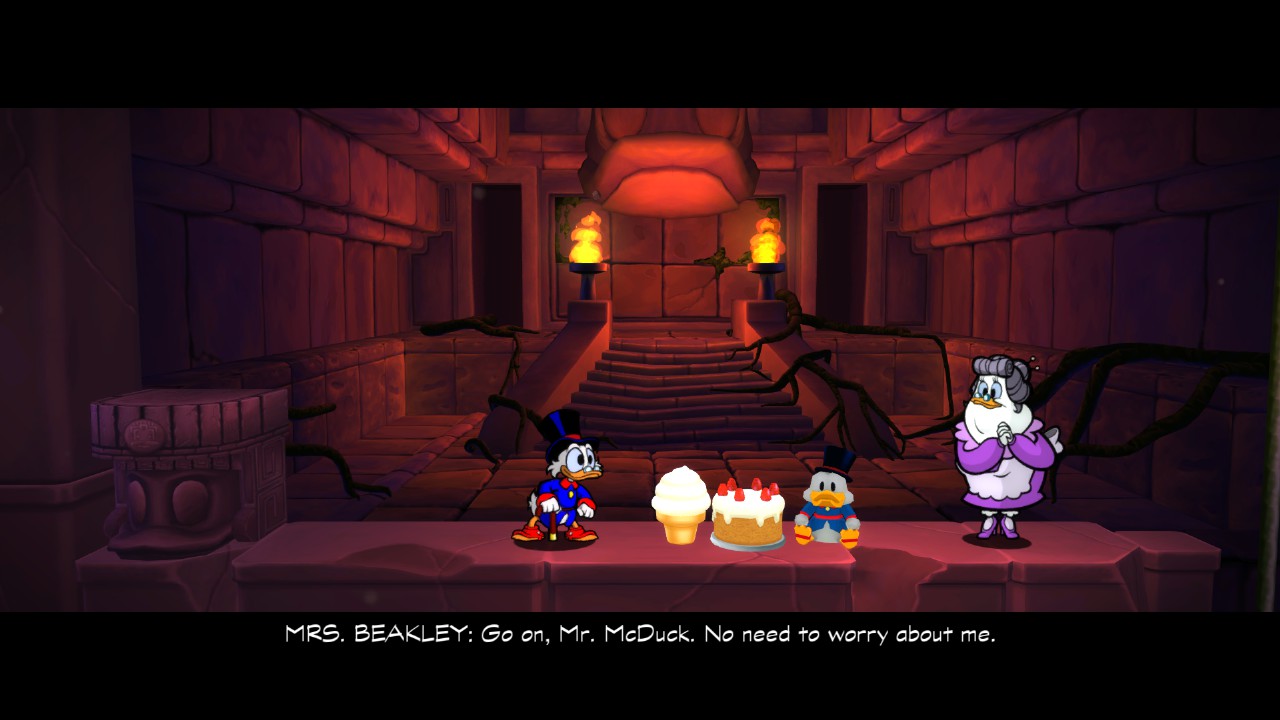 This is the part where I would tell you to go buy the game right now, but unfortunately, it’s now delisted across all digital storefronts. It’s a shame, really: initially released in 2013, the game had less than six years availability, which is pretty long in terms of digital releases but it’s still very sad to see a game go away like that. I think the reason I panic-bought three copies of this game (plus a couple Steam copies for friends) was mainly because I missed out on the excellent Scott Pilgrim Vs. the World game, which I only have the demo of. All in all, DuckTales Remastered is an excellent platformer that aged gracefully, and if you haven’t gotten it already, I recommend finding a used copy somewhere out there for a nice little treat.