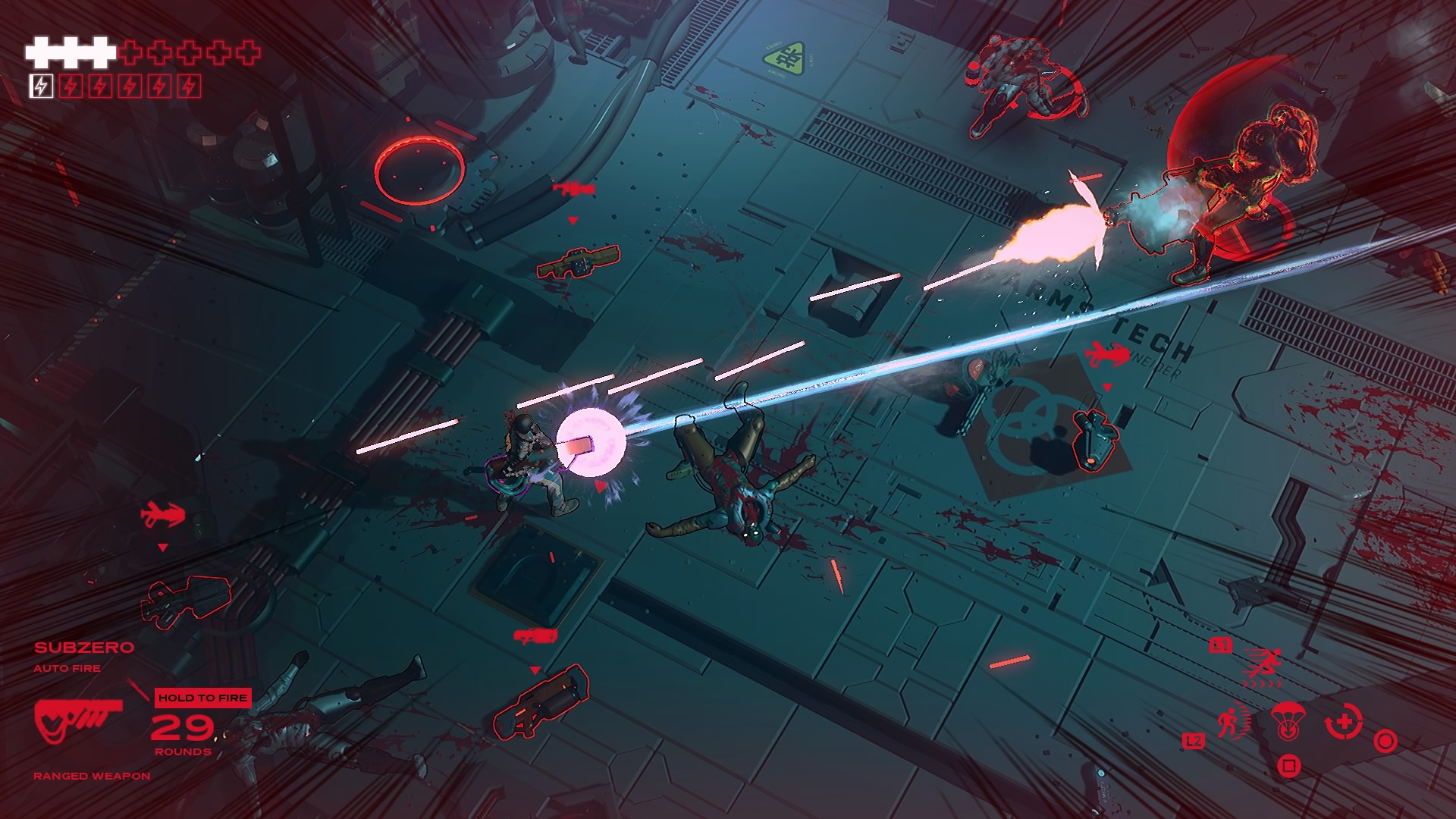 Gun down all who stand in your way

Thrown into a cyberpunk world, you immediately take control of the unnamed protagonist. You are given commands from an unknown master in the form of flashing text and images. He repeats one main objective: kill the boss. As you go on, messages from an unknown girl telling you not to do it will occasionally flash on screen. You fight your way past enemies and turrets until you finally reach the boss’ office. This is when you stop and discover the truth: your brain has been hacked. You were manipulated into trying to assassinate the boss of Heaven, but the girl, only known as Her, has broken the hack. The hacker also took your brother to make sure you got the job done, so now your mission becomes saving him.

Her just after breaking your hack

Ruiner is a twin-stick shooter with a melee aspect as well. You start with two weapons, the Ruiner gun and the crowbar. The Ruiner gun has eight shots in a clip, but can be reloaded an infinite number of times. The crowbar also has unlimited durability. This is not the case with other weapons though; other guns run out of ammo and other melee weapons have limited durability before they are tossed aside. When an enemy is down, you can pick up their weapon and use it as your own. This will be used instead of your current starter weapon, but will never remove your starter weapons. This is helpful, as it makes sure you’ll never be without a weapon.

You may also find weapon lockers once in awhile. Hacking the locker will open it up and provide you with a stronger gun to use. Hacking involves a sequence of buttons needing to be pressed in order before the timer bar runs out. This may sound tough, but the bar moves pretty slowly. You can take your time if you aren’t fast with those kinds of tasks. Weapons you could find include, but aren’t limited to a freeze gun, a grenade launcher, and lasers.

In a lot of cases, after defeating all the enemies in certain areas, a weapon grinder will drop. The weapon grinder will absorb every weapon on the ground within the area and turn it into Karma. Karma is this game’s version of experience, so I recommend using the weapon grinders every chance you get. In addition to grinding up guns, the other ways to gain Karma is through beating enemies and opening random chests. The chests can be found throughout every level and they are sometimes easy to miss. The tops of the chests have red flashing lights, which helps find them in darker areas where they might just blend in with the surroundings.

Each new Karma level provides you with another skill point to spend. There are plenty of skills to unlock and upgrades to purchase for them. The abilities you can unlock include a couple types of shields, a temporary power boost, a supply drop, a few types of grenades, and more. Unlike most games, once you spend a skill point on an ability, it isn’t locked in. You can remove skill points and place them somewhere else as many times as you like without penalty. This allows you to change up your abilities on the fly, which is especially helpful when facing a tough challenge. For example, if you’ve ignored shield upgrades and come to a fight where you need to block a lot of bullets, you can take points away from other skills in order to boost your shield until you win. Changing my play style for certain fights became easier because of this feature.

Speaking of abilities, one of the earliest the game will teach you about is the shield. The shield will block shots as long as it’s up and won’t go away until you run out of energy. Almost every ability you use requires energy to activate it. Energy, as well as health packs, may be dropped by defeated enemies, so don’t worry about being too conservative with it. That being said, don’t go crazy with it or you could run out when you need it most. Health pads and energy pads are spread out throughout the levels, which can be used to refill part of your health and energy supplies. Another skill that is extremely important is dashing. Dashing allows you to dodge attacks faster and even close the gap between you and an enemy. Before upgrades, you are able to dash up to three times in a row. This is useful because staying still for too long could turn you into a sitting duck.

The “hub world” so to speak takes the form of a city. In this city, you can walk around and find some extra missions to take on. There aren’t many, but my personal favorite involved helping a “freedom fighter” of sorts. You are tasked with finding cats and hacking into them to find intel on some shady plans. It sounds weird, but those cats are actually surveillance equipment being used to spy on the citizens. The mission repeats a few times, but it unlocks loot boxes for use in later levels.

Ruiner is a great challenge and can definitely be tough at times, and that’s just on normal difficulty. You may end up dying a lot, but the checkpoints are fairly frequent and restarting after a death is pretty quick. So no worrying about waiting around on loading screens after dying. This will allow you to hop right back into the action and get back to ruining all enemies that stand in your way.

The gameplay feels tight and precise, which is great considering how fast paced and frantic this game can get. The soundtrack sets the cyberpunk tone well and even mixes in the ominous feeling of something not being right. The world that is built is amazing yet dark and disturbing at the same time. There are plenty of challenging fights to keep you playing until you've beaten the game.

Codi loves to play video games and watch movies. He will watch almost any kind of movie just to experience them. His ideas take inspiration from the shows and movies he watches, and games he plays. He also loves a good pun.
Related Articles: Ruiner
Share
Tweet
Share
Submit