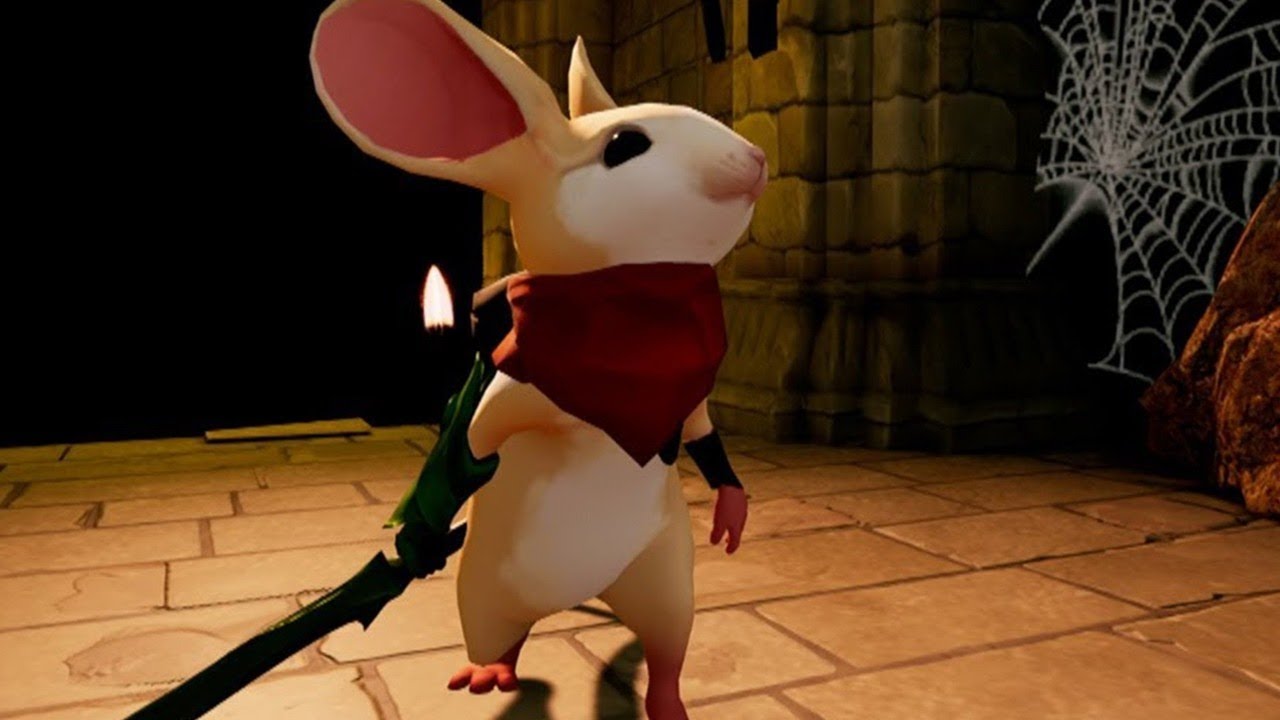 If you are a relic like me, you grew up on movies and books like NeverEnding Story.  The idea, if you’ve never experienced the story in either medium, is about a kid name Bastion who reads a tome that ends up being about his experience within the story.  It’s full of chases, close calls, touching moments, and the whole thing is very meta. Moss is a little bit like that. Rich in storytelling, the game is about a little mouse named Quill who finds herself in the middle of an adventure full of danger and whimsy; ultimately, the whole thing is about Quill’s world and your collective role in it.

Developer Polyarch casts you as “The Reader”, setting you at a table in front of a book and asking you to embark on an adventure using virtual reality and your Dualshock 4’s motion controls.  Reaching out and turning the page, the narrator tells you that Quill, the cute little mouse protagonist, is on a mission to rescue her uncle from a fire-breathing snake creature. Tiny sword in hand, she sets off on her quest with grim determination, with a little help from you.

Moss presents its world from a third-person perspective.  You’ll guide Quill with the left analog stick, but it’s the motion controls of the DualShock 4 that do the heavy lifting.  Using the triggers to grip objects, you’ll push and pull on boxes, raise platforms, and otherwise manipulate the environment for Quill to navigate through the beautiful set pieces.  Later, you’ll be able to take control of enemies, forcing them to hold still while Quill dispatches them, turning them against other foes, or using them to complete puzzles. When little Quill is hurt by those same enemies, you’ll be able to reach down and heal her.  You can even high five the little adventurer to celebrate her success. It’s subtle, but somehow some of the best immersion we’ve seen on the platform to date.

Mechanically, VR has a nasty habit of making people feel nauseous thanks to unnatural movement.  Polyarc manages to sidestep this by presenting a world that only moves as you do. That is to say, you can keep your head facing forward, but letting your natural instincts take hold will open the world of Moss in a way you would never expect.  You can peer around corners, look over obstacles, peer under places, and otherwise inspect the world around Quill. This lets you find the two collectibles in the game – thirty-one Forgotten Fragment scrolls, and 375 specs of Relic Dust. I can’t say that I’ve collected them all, but finding them is a rewarding experience in and of itself.

This is one of the best looking VR title on the platform to date.

One of the aspects of Moss that I appreciated most was the connection it makes with the player.  The game is gorgeous, true, but the perspective of being a giant helpful force for Quill’s adventure makes the whole thing larger than life.  By the end of the first hour of playing the game, you’ll feel bad every time something untoward happens to the little mouse, and you’ll cheer when you solve puzzles together.  Quill doesn’t talk a lot (most of that is left to the narrator), but rarely have I connected with a character so completely.

On a personal note, this game has a special place for me – it made my wife appreciate platformers.  She doesn’t play jumping puzzle games like this at all, but placed in a VR world, she sat down and played Moss from beginning to end without taking a single break.  She unlocked every puzzle, made every jump, and solved every quest herself. VR has had a transcendent effect on her gaming habits, and Moss is an elegant demonstration of how a well-executed game can create new audiences.

Moss’s six chapters will take you roughly five hours to complete, and honestly, it’s the only downside – despite being complete, it will leave you wanting more.  Thankfully, Polyarc labels this ending as the close of “Book 1”, giving us hope for future adventures for little Quill.

Polyarc has created a fantastic world filled with compelling characters, creative puzzles, and a story that’ll stick with you long after the five-hour runtime. Moss is precisely the reason you buy a PSVR, and it’s sure to make any player fall in love with a brave little mouse named Quill.

Ron Burke is the Editor in Chief for Gaming Trend. Currently living in Fort Worth, Texas, Ron is an old-school gamer who enjoys CRPGs, action/adventure, platformers, music games, and has recently gotten into tabletop gaming. Ron is also a fourth degree black belt, with a Master's rank in Matsumura Seito Shōrin-ryū, Moo Duk Kwan Tang Soo Do, Universal Tang Soo Do Alliance, and International Tang Soo Do Federation. He also holds ranks in several other styles in his search to be a well-rounded fighter. Ron has been married to Gaming Trend Editor, Laura Burke, for 21 years. They have three dogs - Pazuzu (Irish Terrier), Atë, and Calliope (both Australian Kelpie/Pit Bull mixes).
Related Articles: Let's Play, Moss, VR
Share
Tweet
Share
Submit