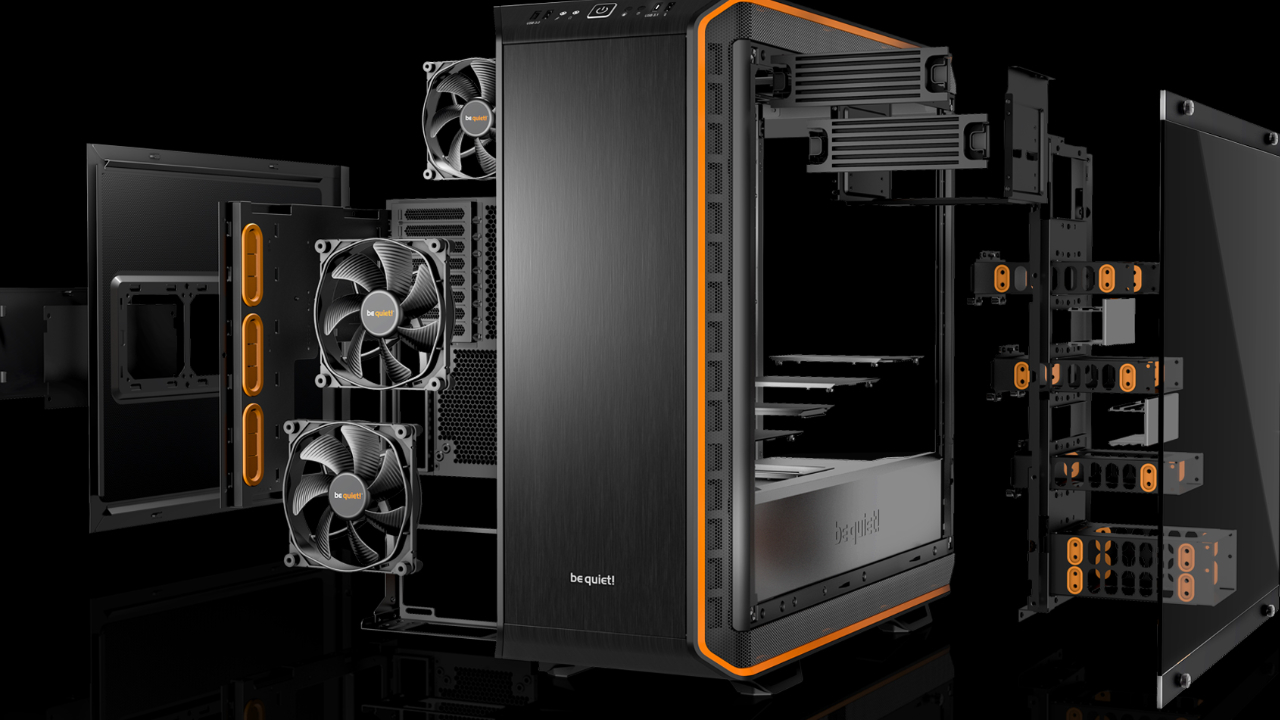 Let’s say you’ve managed to score yourself a GPU, despite the difficulty. You also picked up a motherboard and CPU combo, and you’ve got RAM at the ready. Acquiring a power supply will set you back about 200 bucks, but then you are off to the races, right? Well, not quite. You need a solid case that’ll provide good airflow and plenty of space. Frankly, you are spoiled for options, but we are looking for more than just a steel frame and some fans. be quiet!, a company out of Germany specializing in, you guessed it, quiet components, has a trio of case lines ranging from micro-ATX all the way up to massive E-ATX boards. It’s go big or go home, so we’ve selected the be quiet! Dark Base Pro 900 Orange Rev. 2 as our chassis of choice. Without further ado, let’s build a PC!

Since I’ve helped a lot of folks build PCs, especially recently, I thought I’d walk you through that build process. For this build, which can only be described as obscene, I’ve collected the following:

Put simply, this is the most powerful system money can buy, for the next few months anyway. Let’s put it together, shall we?

Regardless of intention, you never know what problems you’ll encounter doing a build. Some go without a hitch, and others are a nightmare. One thing I’ve found can be a big differentiator is simply room to work. Small cases like micro-ATX models or even some compact mid-tower variants can be painful to work in. Whether that’s sharp edges, ultra-tight tolerances, or simply that the motherboard manufacturer has stuck a massive block of tech or cooling fins in an inopportune place, a case can make a huge difference. However, there is one part that’s often overlooked – your case is also the grounding block for everything you’ll place in it. 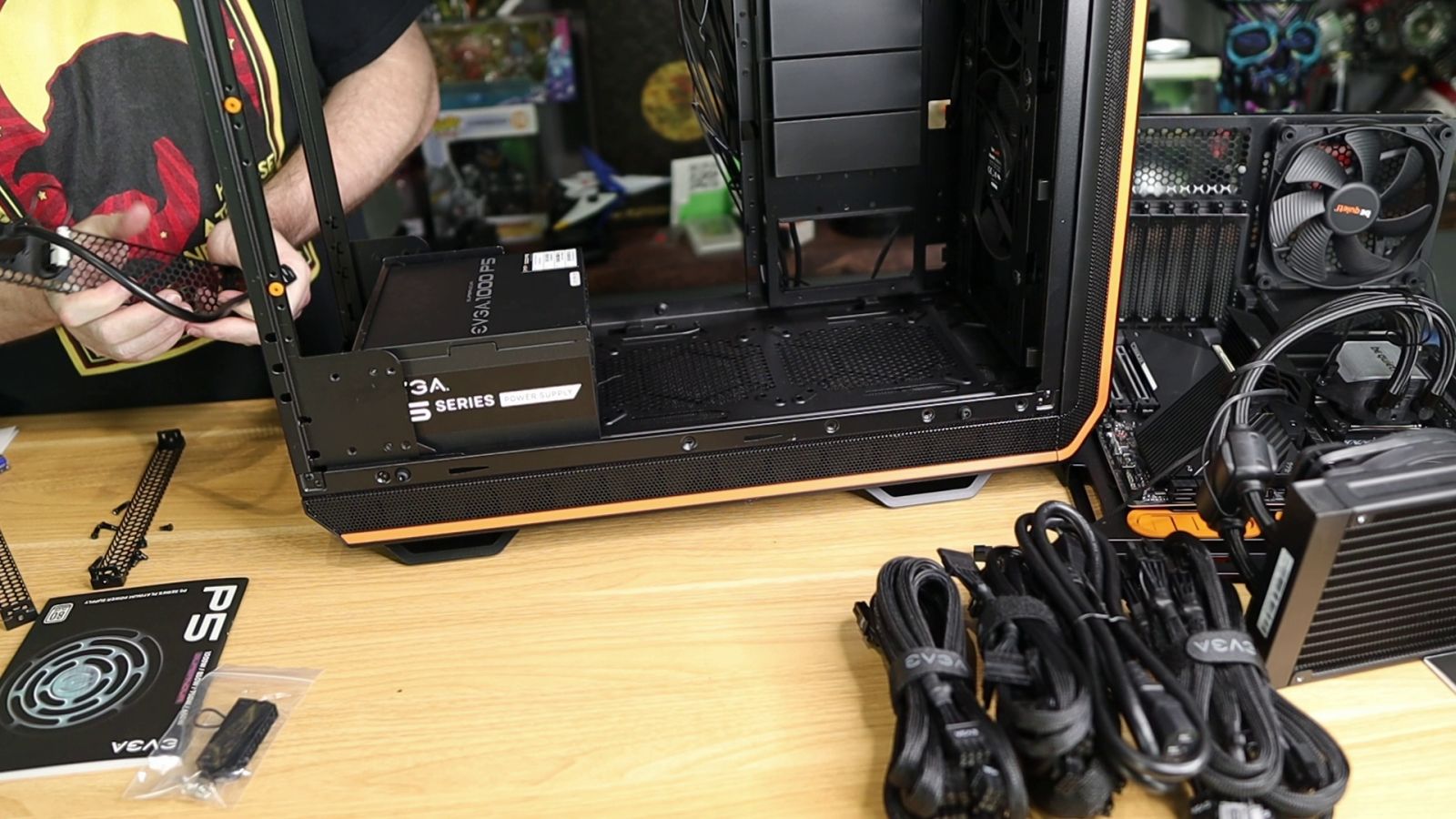 The be quiet! Dark Base Pro 900 Orange Rev. 2 (hereafter referred to as the Dark Base Pro) is, as expected, spacious, but extra room isn’t all that matters in a case. It has several rare features that are ultimately game changers. First and foremost, the entire mounting plate where you’ll lock down the motherboard can be entirely removed from the chassis. This means you can build your board on the plate and then simply maneuver it in place once you are done. I honestly had no idea how easy and convenient it would be, but now I cannot imagine building any other way. It let me check the components before I fully built the system – something I appreciated greatly. 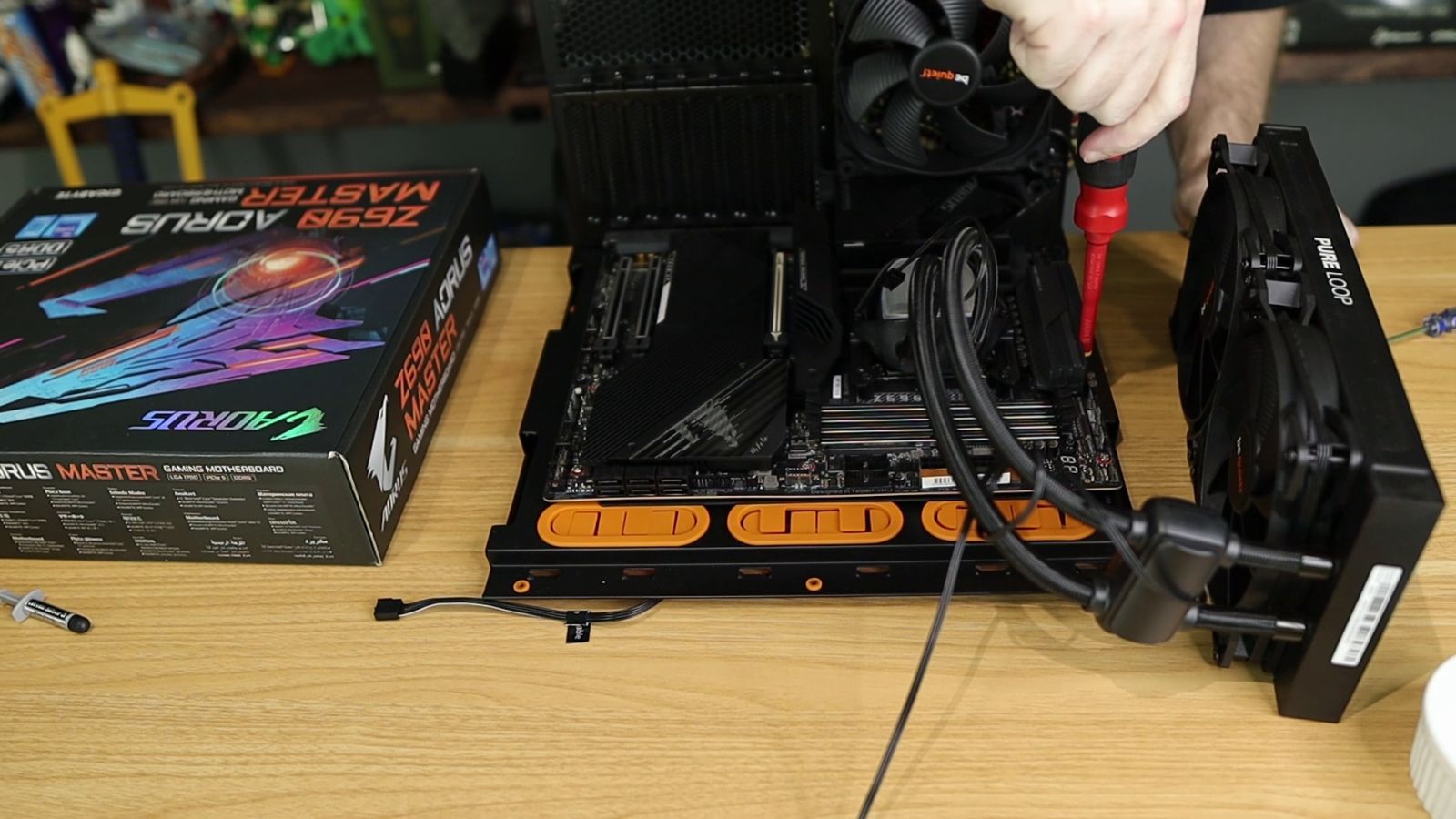 Naturally a case this size is rife with expansion opportunities. There are a whopping eight expansion slots and ten fan mounting locations. Better still, the case is modular. When I say modular, I mean nearly every piece of this case can be unscrewed and moved elsewhere. At multiple times during the video above you’ll see that I juggled fans, coolers, and components around to accommodate for the motherboard, ultra-large GPU, and more. The Dark Base Pro is easily the most flexible case I’ve ever worked in by a wide margin. I cannot come up with a single combination of parts that the case couldn’t handle.

Aesthetically, this is a case that could be stacked with a RAID 10 array of spinning platters, multiple SSDs, and a whole stack of NVMe drives, and yet still look absolutely empty. Included in the box are a number of single or double hard drive cages, complete with rubber grommets to ensure that whatever you put in them remains as quiet as possible. Thanks to a shroud that covers the power supply and expansion slots on the bottom of the case, all of the hard drive cages are also tucked out of sight. They can still receive airflow, which is important for cooling, but you won’t be staring at a massive block of milled aluminum hard drives. This shroud is also modular, with small plastic plates that can be removed for additional airflow. This is handy should you wish to flip your power supply so the fan faces upwards, or if you just want to make sure any components under the shroud have room to breathe.

If you are still needing optical drives, you’ll find two spaces available for that purpose, you’ll simply need to move some of the modular cages around to accommodate. Just below this is a clip that releases a full-height removable air filter screen that sits directly in front of two of the three included SilentWings 3 140mm PWM fans. Speaking of fans, there are more than enough opportunities to install them here. In fact, there are a whopping 10 fan mount positions. If you aren’t into air cooling, there are also four possible internal reservoir mounting spots for either a flexible or solid liquid solution. Similarly, the Dark Base Pro supports radiators all the way up to 420mm, though this is highly dependent on the size of the connection panel and, at least in the case of the X690 Aorus Master, contains the large heatsink over the MOSFET, thermal conductivity pad, and I/O shield. 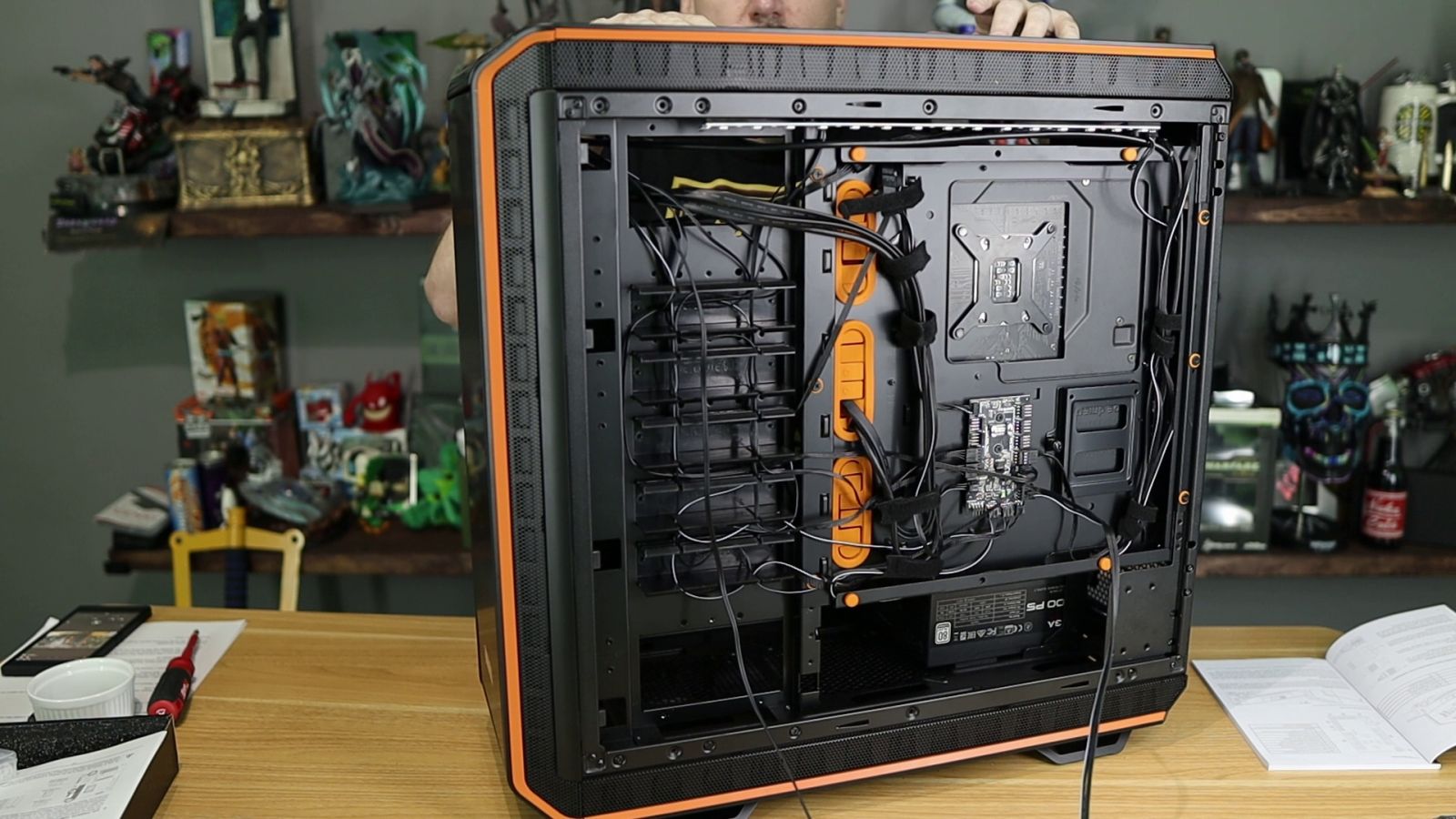 There is a worthwhile revision to the Fan/LED controller that is nestled on the rear of the chassis. Rev 1 of this case had four fan controllers, which has now been expanded to eight. This allows you to control the fans and any subsequent LEDs (which are now 12 volts) to synchronize them all via the controller. Better still, they are stupid-proof – they can only plug in one way, and at one location. If you are pushing, that’s not the right spot. All of this can be controlled via a button on the front panel that would normally be the reset button.

While we are under the shroud, additional flexibility is available with an optional piece. The power supply can be placed in several locations in the case, and the included panel will connect the plug and the PSU regardless of position. That said, if you push it too close to the rear of the case, you might need to pick up a new plate cover that allows your power supply to sit all the way back. If you are using a standard sized power supply (something at less than 1000W, more than likely), you won’t run into this problem, but it’s an option for builds that are more obscene than mine.

The X690 motherboards are bringing a host of connectivity choices, and you’ll want a case that is ready for them. The Dark Base Pro has two USB 3.0 ports on top, one USB 2.0, a USB Type-C, and the standard mic and headphone jacks you’d expect. Above that, surprisingly, is a full-width wireless charger for Qi enabled devices. Being able to set a phone on top of the case for inductive charging is a fairly unique feature, from what I can see. For me, it meant one less device on my desk, so that’s a win in my book. 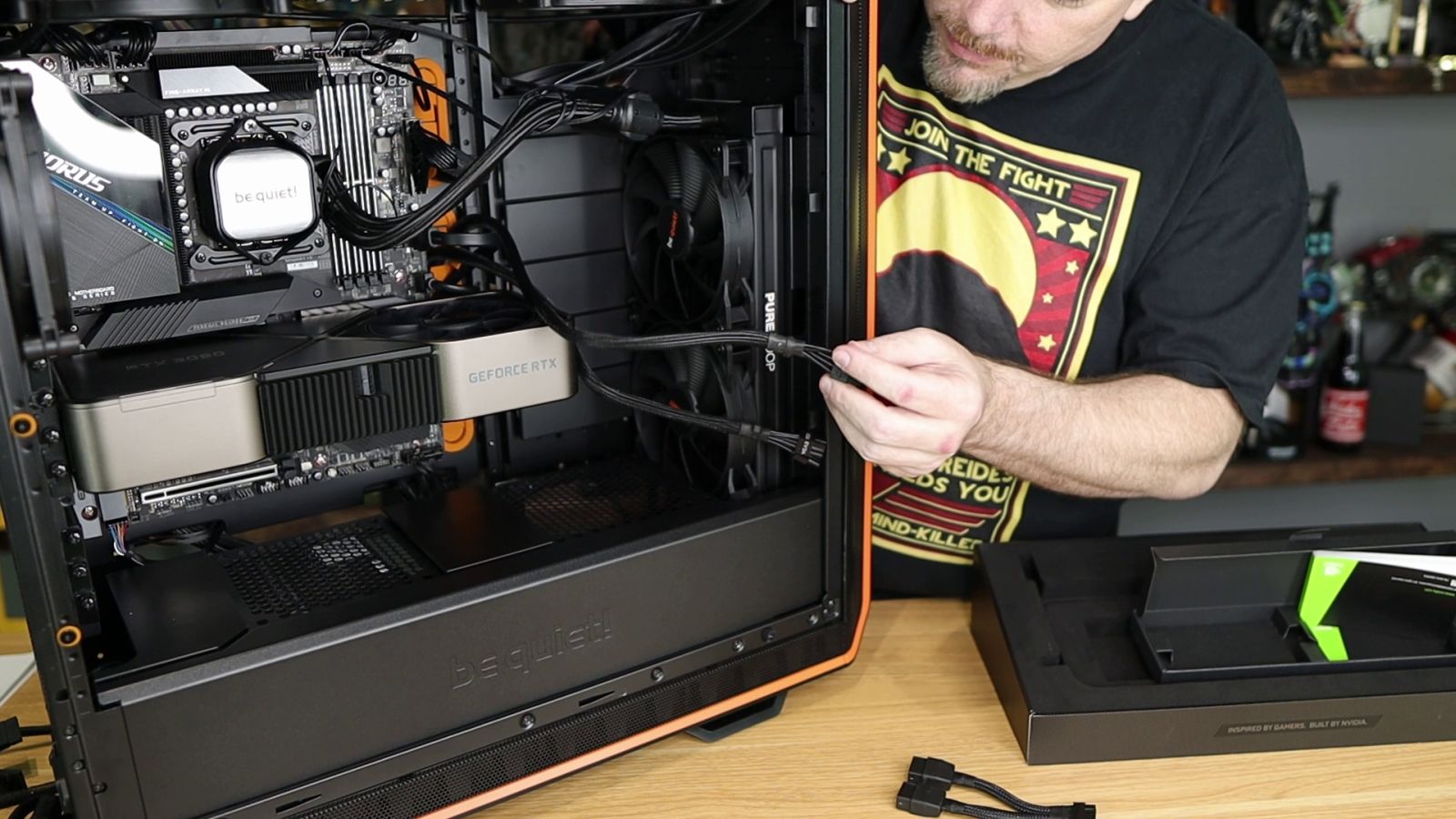 To make sure the Dark Base Pro lives up to the company name, there are multiple sound-dampening technologies in play here. Both the front and side panels have insulated sound-dampening mats, and every screw in the motherboard, hard drive cages, fans, PSU, and everything in between has bright orange gromits to keep sound to a minimum.

The other side of the case is enclosed with a 4mm thick tinted and tempered glass panel, held on with four gromited screws. I know this is VERY sturdy glass as my butterfingers dropped the glass from roughly 4.5 feet up and directly onto hard tile and it didn’t even take a scratch. Your mileage may vary, of course, but if it can hold up to my clumsiness, it should hold up to yours.

In terms of real-world testing, there’s no substitute for sound and power testing. The case is remarkably quiet, with my mechanical backup drive making the only noise that isn’t fully absorbed by the case itself. The glass does a great job of deflecting any component noise or coil whine. In terms of temperature, there’s a GeForce RTX 3090, an Intel 12900K, and 32GB of DDR5 running at 6000Hz in this box, so I expected heat to be a challenge. Surprisingly…it isn’t. In fact, even when running an intense game like God of War at over 100fps and at 4K, the temperatures topped out at 30C (86F). Honestly, I had to re-run my tests as I’ve never seen temps below 90 in any case I’ve owned. I could have run things like FurMark, but honestly that’s not a game we are playing – I prefer real world results to synthetic ones. 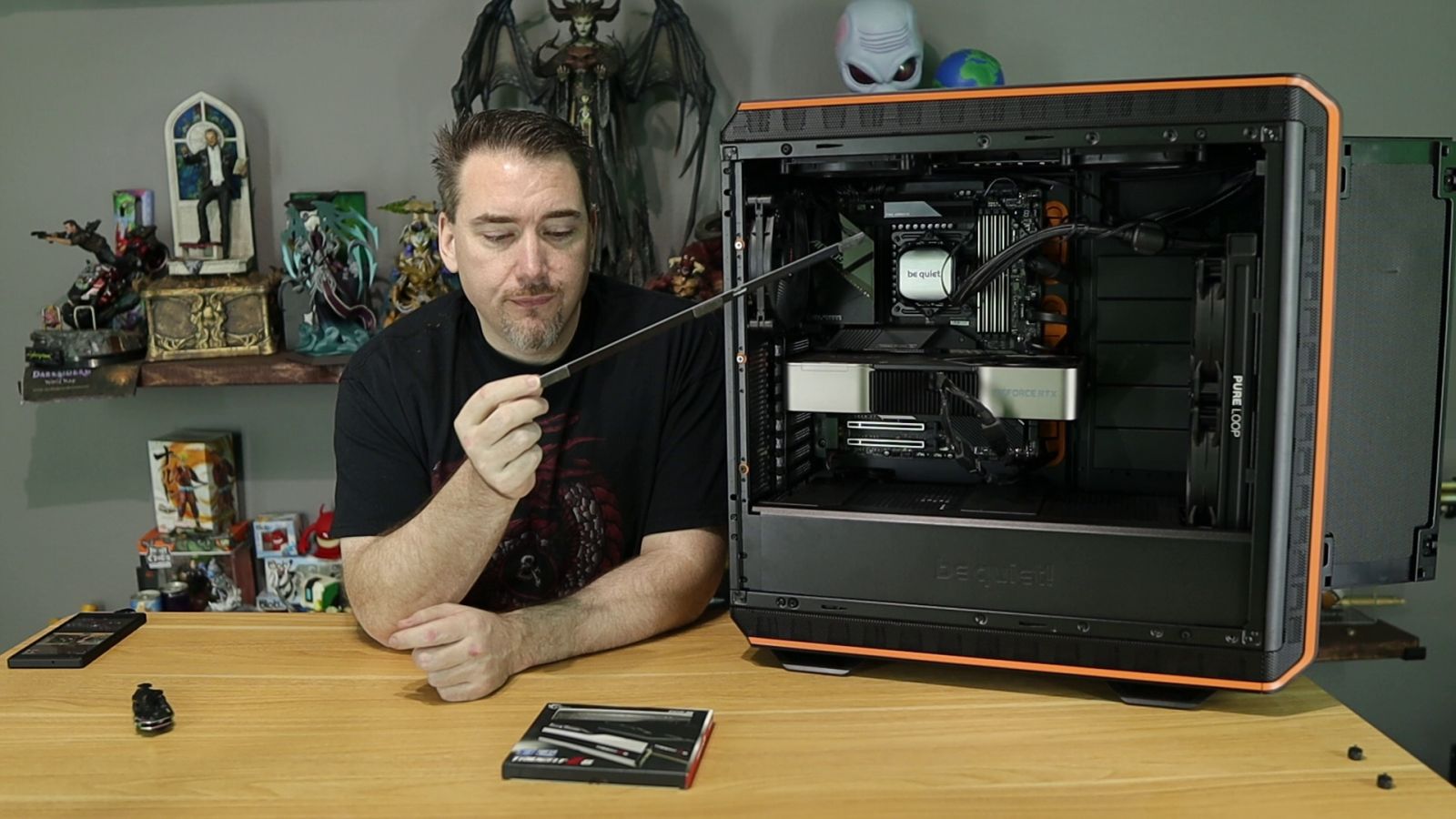 That’s a look of disappointment.

If there’s one thing I have to knock the Dark Base Pro for, it’s the LED strips. Attached with a trio of 3M strips, these strips didn’t even last the month between when I installed them and when I finally received my backordered RAM. Magnets are the way to go, and honestly for a case with this many premium features, it’s a surprise to see be quiet! go the cheap route.

The be quiet! Dark Base Pro Orange Rev. 2 is a magnificent case. It delivers premium features, lives up to its be quiet promise, and does so at temperatures I’ve never seen in any case I’ve owned. Able to handle any configuration you can throw at it, this case is one that’ll last you for several generations, and maybe more. Make an investment – you won’t be disappointed.

Ron Burke is the Editor in Chief for Gaming Trend. Currently living in Fort Worth, Texas, Ron is an old-school gamer who enjoys CRPGs, action/adventure, platformers, music games, and has recently gotten into tabletop gaming. Ron is also a fourth degree black belt, with a Master's rank in Matsumura Seito Shōrin-ryū, Moo Duk Kwan Tang Soo Do, Universal Tang Soo Do Alliance, and International Tang Soo Do Federation. He also holds ranks in several other styles in his search to be a well-rounded fighter. Ron has been married to Gaming Trend Editor, Laura Burke, for 21 years. They have three dogs - Pazuzu (Irish Terrier), Atë, and Calliope (both Australian Kelpie/Pit Bull mixes).
Related Articles: Dark Base 900 Pro Orange rev. 2 Case, Hardware
Share
Tweet
Share
Submit