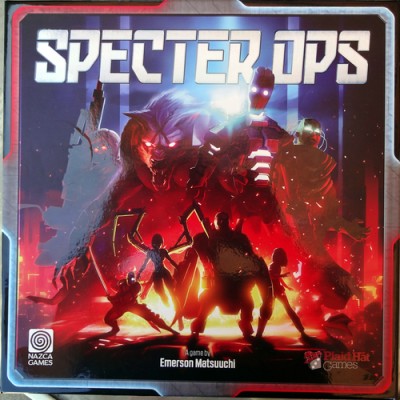 Among board gamers, 2015 should be remembered as one of the greatest years for the hobby. There were a great number of titles that came out, and making a list of top five games of 2015 was incredibly challenging. It is for that reason that I will cheat slightly. I compiled a list of my top five board games. All of these games are stand alone experiences which I will be playing for years to come.

5. Specter Ops: Shadow of Babel: This is an excellent fast past hidden movement game. In it, one player is moving around secretly, trying to infiltrate and hack a megacorporation, while one to four other players are trying to kill that player. This is a clean design that is equally tense on both sides of the table. What makes this game great is the variety involved. There are several different hunters and agents, all with crazy superpowers, adding a rich story to the narrative and changing the way those characters go about this cat-and-mouse game. It is my go-to deduction game.

4. Super Motherload: This is one of the most unique games I have ever played. Players use pilot cards of different colors to dig and bomb their way through Mars’ crust. They gain gems in order to buy more pilots cards over several turns. This makes for a more deliberate deck builder that feels unlike anything else in the genre. Everything about this game is fantastic, from the art, to the slight asymmetry of player decks, to the achievements that you can get over the course of the game.

3. Tides of Time: This is easily my most played game in 2015 (which is impressive, considering I bought the game in October).The game a fast, simple, beautiful, and addicting two-player drafting game that only costs $12. This game is made up of only eighteen cards,  which allows you to quickly learn the cards. Tides of Time represents drafting as its best, forcing your to prioritize the cards you wants to acquire and the cards you don’t want your opponent’s to acquire. Yet the game still plays quickly, and you will play several matches in a row.

2. Tail Feathers: Tail Feathers is the miniatures game I have been waiting for. Set in the Mice & Mystics universe, one side plays the Vermin Raiders,a group of rats riding vicious hunting birds, and they face off against the Downwood Militia, mice riding blue jays and starlings, respectively. From flying the birds with an amazing tilt system to sending your ground units on missions to infiltrate the opponent’s base to having units travel on drifting leaves, Tail Feathers is an amazing, thematic experience.

1. Ashes: Rise of the Phoenixborn: This is the card game I have been waiting for. Featuring the most gorgeous art I have ever seen in a game, Ashes is the most polished card game I have ever played. The rules are really simple and accessible, but this game can become incredibly deep because of the importance of every little action. Ashes tied for my all-time favorite game, and it offers everything I could ever want from a card game.