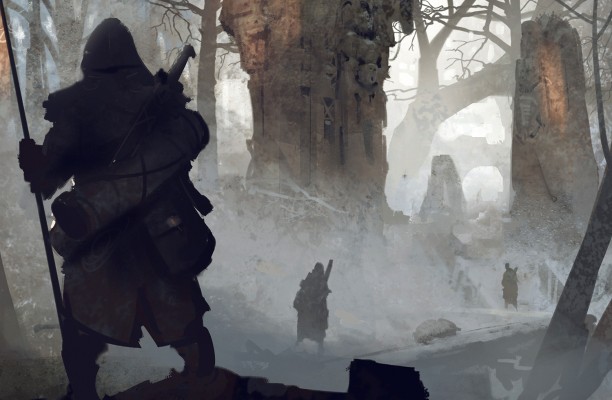 2015 saw grand expansions of the Tabletop genre, and it was a great sign of what we can all expect from the quality and popularity of the hobby. There were some phenomenal steps forward for all genres and game types. Cutting everything we all saw down to a list of five was no simple task, but each of the games below added something well-needed to tabletop players with execution we rarely get to see. Honorable mention goes to Cypher System and Savage Lankhmar, which were standout releases that helped to make 2015 memorable and exciting.

Dark Fantasy has seen some fantastic releases this year, and Symbaroum helped solidify the genre for gamers of all levels of experience. Character creation is fast yet complex, requiring a minimum of effort to make diverse and  compelling characters. The art is a mesmerizing set of paintings that flesh out Symbaroum’s mysterious Davokar, a dark forest at the edge of civilization filled with ancient ruins and powerful magics. As Jahringen continues to translate its Swedish materials we are sure to see great support for an already phenomenally thematic product.

Shadow of the Demon Lord
The Old School Renaissance has been content to stick very close to old mechanics of original D&D, but Shadow of the Demon Lord brings a design philosophy with flair, style, and craftsmanship. Rob Schwaib brings every lesson he learned as a luminary of game design into this product, and the final game shines through as a triumph of well-considered choices. Nothing is kept that can be thrown away and the final product, while only appealing to a certain subset of gamers, will give them the best in a dark fantasy world that wants them dead or insane.

Star Wars: Force and Destiny
Fantasy Flight rounded out its Star Wars line with a bang. Finally we can force jump, duel with lightsabers, and fall to the dark side in a game that also has  robust mechanics and deep storytelling. Once you get past the admittedly hefty price tag ($60 for the core book and $10 for the dice necessary to play) and new resolution system, you will be enveloped in a rich, deep sci-fi experience. Not since the days of West End Games have we had such a well crafted way to jump into the Star Wars universe, and this game’s success signals good things for Fantasy Flight’s upcoming projects (looking for Legend of the Five Rings announcements in 2016…).

Codenames
Codenames is intelligent, intuitive, deep, fun, and a must buy for serious or casual gamers. Never have I seen something that could pull people to the table so easily and keep them so engaged. This game has near infinite replay value and tests your mind without devolving into abstract calculations. As far as I am concerned Codenames was easily the best party game of 2015 and among the best ever made.

Fantasy AGE
Inspired by the Dragon Age system– though tweaked to allow for more generic play– Fantasy AGE offers the best tactical action combat  seen in years. Character creation and task resolution are incredibly simple, but without having to abstract basics like the skill system. The stunting system is a breeze to use but also makes every combat situation a dynamic, tactical experience.  Low to mid fantasy settings now have one of their best tools, and disheartened D&D or Pathfinder players have an alternative that will give them exactly what they desire.

Ashes: Rise of the Phoenixborn
Continuing in its quest to revolutionize game types, Plaid Hat solves the issues of the Living Card Game format and releases the best game of 2015. Ashes is a beautiful game that is accessible as it is deep, and the release schedule is responsible and affordable. Every game contains tense, meaningful choices that never break from the game’s theming. During every game, you feel you are the magical sorcerer battling for dominance, playing out your fight over timing and resources with high quality dice and stunning art. It takes only a work of magnificence to come into an already crowded field, and Ashes more than delivers.