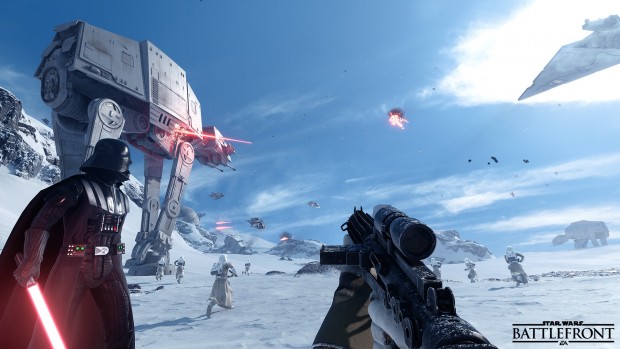 The Battlefront beta has officially concluded, and we are once again left salivating over the thought of taking on Imperial scum. The beta provided us with a brief sample of the game’s epic moments, giving us a taste of what to expect in the full release while also helping us rest easy that the Star Wars license is in good hands.

However, despite everything that the Battlefront beta succeeded at, there is still a great disturbance in The Force. Battlefront absolutely nails the huge scale and sci-fi feel of some of Star Wars’ most iconic moments, but some underlying concerns still stand. These issues, as middling as they may be, all have the potential to hinder the multiplayer experience, and without a single player campaign, there is reason to be cautious for the balance of Battlefront’s multiplayer emphasis. With a few weeks to go before the full game release, we hope that a few of these issues can be ironed out. Here are three concerns from the beta that threaten the Star Wars Battlefront experience:

Battlefront features some huge battles with up to 40 players, and with that, there is bound to be a lot of bloodshed and death. The problem, though, is that the spawn points are random and flawed, seemingly executed with little optimization. The default spawn option places players back in the match at specific locations, without regard to nearby enemies or proximity to the action. Restarting a mile away from the battle means you’re wasting precious time catching up. Meanwhile, respawns right in the line of fire, on top of a live grenade, within the radius of an incoming orbital strike, or even between the legs of a deadly AT-ST, are not only possible, they’re downright common. Battlefront needs to be more respectful of my time; being killed over and over within seconds of spawning is just not fun.

The option to respawn on top of a partner player is also possible, but this has just as much potential for disaster as default spawning. Joining the match at a partner’s side provides a great way to get closer to the action while still providing the support of a teammate. However, there is just as much potential to spawn right in the middle of a firefight, being quickly picked off before you even realize what’s going on. Being on the other end of an opponent’s partner respawn is just as unfortunate as well, as a one-on-one shootout suddenly becomes incredibly one-sided. The original Battlefront games used captured points to designate respawn points, far from enemy fire. Why can’t the 2015 Battlefront find that same comfort?

Other large scale multiplayer shooters have succeeded before in regards to spawn points, so Battlefront should be able to manage that as well. With battlefields as huge as Battlefront provides, there should be no reason that spawn points can’t be optimized to prevent being killed within seconds of returning.

This is how way too many respawns start.

Like many popular shooters, Star Wars Battlefront allows players to customize their loadout to suit their play style. Power-up cards containing abilities and weapons, such as Thermal Detonators and Ion Grenades, can be purchased and used in battle, with more abilities unlocked as players continue to level up. While it’s not uncommon for the abilities of high-level players to eclipse those of novices, even in other popular shooters, Battlefront has the potential to take the disparity to a whole new level.

The beta only allowed players to go as high as level five, but with this maximum level came one of Battlefront’s greatest assets: the Jetpack. This power-up may seem reasonable at first, but has the capability to ruin the already-fragile balance of the game. During several of my Walker Assault matches, one or more high-level players would fly up to the peak of Hoth’s mountain and continue to snipe the enemy players below – a tactic that is all the more annoying given Battlefront’s unlimited ammo. With Battlefront’s potential to spawn right in the middle of its huge, sprawling maps, and without any way to reach them yourself, you immediately become a target to be picked off like fish in a barrel.

Unlocking cooler and more powerful abilities may not always be the most balanced way to play a multiplayer match, but it at least encourages players to keep progressing and adapt to new situations. As unfortunate as it is, every online multiplayer game always has players who are eager to exploit this for cheap kills, and for the most part, players tend to learn to ignore or counteract it. Fault may still largely lie in the hands of the player, but Battlefront deserves some responsibility as well, as it gives them the tools to exploit the system, ruining the experience for others and threatening the balance of this game’s online popularity.

The worst way to play.

The imbalance of Walker Assault

The beta’s centerpiece offering, Walker Assault showcased just how well Battlefront can handle the huge set pieces and iconic warfare of the Star Wars universe. Perhaps most importantly, it even managed to capture the essence of the Battle of Hoth, letting players feel like they were really a part of the iconic battle. You could even say that Walker Assault is too accurate, though, as the Imperials win almost every time, much like the movie from which the battle originates.

Of the dozen or so Walker Assault matches that I played in the beta, the Imperials won in all but one of them. With the ultimate goal of taking down two AT-AT walkers with a huge amount of armor that can only be damaged by securing and holding satellites that call in Y-wing bombers, the odds are almost always stacked against the Rebels. Even in matches where a walker was able to be destroyed, it was always done by a Snowspeeder tow cable rather than the all-out force encouraged by the primary method. The expectations of the Rebels are just too high in Walker Assault.

Many of the balance issues potentially stem from the Imperials’ ability to pilot AT-ST walkers. Rebel soldiers have no equivalent heavy artillery on the ground, so they are relegated to fighting on foot or in the air, while constantly fleeing from advancing Imperial fire. Regardless of whether the balance issues originate from the steep objectives, the lack of heavy weaponry, or both, the fact remains that the Rebels have the odds stacked against them, and without balance, there is huge potential for players to switch sides or quit, harming the potential Battlefront has for a long lasting multiplayer fanbase. A few small tweaks to give the rebels a competitive boost could help provide a level playing field and encourage closer competition.

Not a threat in sight.

What did you think of the Star Wars Battlefront beta? Is there anything you’d like to see changed before the full release? Let us know in the comments below and be sure to check back in the coming weeks as we approach Battlefront’s November 17th release.