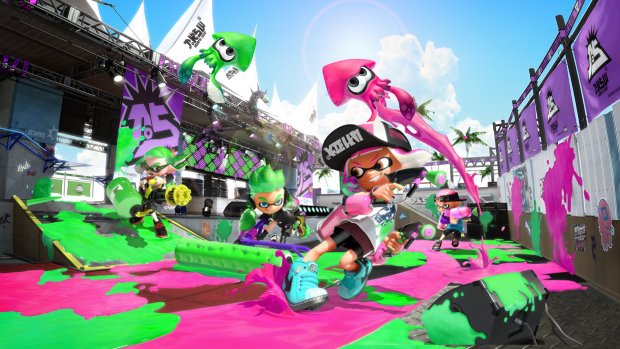 By the end of every multiplayer match in Splatoon 2, I could feel my blood pumping with adrenaline. Even when being utterly suppressed by the enemy team, there’s an exhilarating rush as you fire off every round possible, the entire arena soaked in bright ink. And it’s this exhilaration that keeps the formula of Splatoon 2 feeling as exciting as it ever has, despite not being all that much of an advancement from its predecessor. Splatoon 2 feels largely familiar, but is still an intoxicating game that is perfectly suited for the Nintendo Switch.

Splatoon 2’s presentation reminds me of Mario Kart 8 Deluxe in many ways. Both games are strikingly reminiscent of their Wii U counterparts, yet extremely well-polished and representative of the best iteration that their respective franchises have ever seen. There’s more than a few striking similarities to the first Splatoon; much like the original, Splatoon 2 boasts an impressive multiplayer suite at its forefront, a decent single player adventure backing it up, and a wide variety of ways to cover its arenas in paint. Even the hub world that links you to the game’s various modes feels nearly identical on the surface. But while it’s not the most innovative sequel, Splatoon 2 makes up for it by being an incredibly comprehensive package that takes what worked in the original, tailors it for a new console, and throws in a few new weapons and modes for good measure. It doesn’t always feel like a full-blown sequel, nor does it introduce any major game-changing new mechanics, but Splatoon 2 is a fantastic refinement of the foundation set by the 2015 original.

At the center of it all is Splatoon’s premiere multiplayer mode, Turf War. This four-on-four multiplayer game type equips each player with a splattering weapon and tasks them with covering up as much of the arena in their colored paint as possible before the three-minute timer runs out. This match type is a blast as it offers a chaotic competition that is ultimately about more than just shooting your opponent to death. In Turf War, you can be just as much of an asset to your team by avoiding your opponents and focusing on inking the stage as you can by eliminating them altogether.

What makes Turf War really special, though, is how battles ramp up as time goes on. Matches start with a blank slate and the first minute or so is usually comprised of each team painting their spawn corner. But when teams advance towards the center and unpainted territory becomes rarer, conflict grows as teams collide and eliminate each other while painting over their opponents’ progress. By the final minute, adrenaline is running high as the clock ticks down, the music growing faster. The final moments of the match often feel like some of the most crucial and intense multiplayer that Nintendo offers as players spray every last drop of ink as fast as possible. Like a last-second shot on the goal in Rocket League, matches are frequently so evenly matched that every action could mean the difference between victory and defeat. Turf War may not feel much different than it did two years ago, but it’s still every bit as thrilling.

A bevy of multiplayer options help to back up the standard Turf War battles as well. After reaching a certain level online, Ranked Battles and League Battles open up and provide new game types, such as Splat Zones, a take on traditional territories-style multiplayer modes, and Rainmaker, where teams try to carry a Rainmaker item into the enemy base. These battles rotate every two hours to help give variety, and each one offers a fresh spin on traditional multiplayer modes. None of them can match the frantic heights of Turf War, but having game modes intended for more competitive-minded players helps to round out Splatoon 2’s multiplayer options.

Complementing the competitive game types is Splatoon 2’s brand new Salmon Run co-op mode. Much like traditional Horde-type game modes, Salmon Run pits teams of up to four players against wave after wave of enemy “Salmonids”. Defeating one of the larger boss Salmonids will cause it to drop several Golden Eggs, which players are tasked with returning to a central basket on the map. The end goal of Salmon Run is to defeat enemies, reach a quota of Golden Eggs gathered, and survive until the end of the third wave.

While Salmon Run is a good addition to Splatoon 2, I never truly felt challenged by it. Each of the three waves lasts only a few minutes, and most enemy types move slowly, never posing too major of a threat. I was admittedly taken out by an enemy a small handful of times, but teammates can revive you easily just by spraying ink where you were downed. And even the seven boss Salmonids – which tend to be bigger and more armored – can be taken out with relative ease once you know their weak points. Splatoon seems like a franchise that would be well suited for a co-operative game mode, and the fact that a full round can be completed in under ten minutes helps for bite-sized sessions, but Salmon Run’s overly simple execution means you’re unlikely to get much mileage out of it.

Thankfully, all of these multiplayer modes, competitive and co-operative alike, play excellently on Nintendo Switch. Aside from all being playable online, with public matchmaking or private friend sessions available, the portability of Switch makes Splatoon a great candidate for local wireless multiplayer as well. All of the aforementioned game types are playable locally, and while a lack of local splitscreen multiplayer means that each player needs their own Switch, Splatoon 2 becomes a good candidate for on-the-go multiplayer sessions. More so than Splatoon on Wii U, I look forward to seeing how the range of multiplayer options and ease of the Switch help nurture Splatoon 2’s multiplayer community.

Much like the original, Splatoon 2 also offers a new campaign mode known as Octo Canyon. Callie, one of the Squid Sisters from the original, has mysteriously vanished and it’s up to Agent 4, the new playable hero, to battle Octolings and investigate her disappearance. This adventure takes you across nearly 30 levels where you’ll blast your way through enemies and rescue the ‘Zapfish’ at the end of each stage.

In our review of the original Splatoon, we lamented its campaign as the weakest segment of the game due to its limited weapon variety and repetitive level design. Thankfully, Splatoon 2 fixes many of the issues that plagued the original campaign. Each level of Octo Canyon introduces a unique mechanic, such as ramped conveyor belts that can launch you forward, or the Roomba-looking Squee-G that cleans up your ink. Despite some levels being locked to a certain weapon, a stronger variety of weapons helps cater to your unique playstyle, and I welcomed being forced to try out weapons that I would otherwise have probably avoided. That said, Splatoon 2 is a multiplayer-centric game at heart, and even though the sequel’s campaign has improved, it rarely feels like anything more than a primer for it online battles. Octo Canyon is a serviceable campaign that is a step up from its predecessor, but it’d still be hard to recommend Splatoon 2 on its single-player modes alone.

Lastly, the weapon variety is excellent. Classic weapons from the original Splatoon – such as the well-balanced ‘Splattershot Jr.’ or the efficient melee weapon ‘Splat Roller’ – are complemented by several great new weapon classes. Notable additions include Sloshers, a new weapon type that is literally a bucket that you throw forward and packs a dense pool of short-ranged ink, and Splatlings, a Gatling Gun type weapon that needs to be charged up but unleashes a deadly barrage of ink when fired. My new personal favorite weapon are the Splat Dualies, dual-wielded pistols with strong fire rate and spread at the cost of accuracy. The arsenal of weapons at your disposal lets you choose your own playstyle, and trying out new weapons was always good incentive to keep leveling up online.

Splatoon 2 is bigger and better than the original, despite not always feeling like a true sequel. Nevertheless, Splatoon 2 is still an excellent shooter that sets itself apart from its peers with its unique game types. Salmon Run and a new Octo Canyon campaign are fun distractions in small doses, but the wild battles of Turf War are still where you’ll likely spend most of your time. Splatoon 2 isn’t the perfect sequel, but it’s still a ton of fun and another great multiplayer exclusive for Nintendo Switch.

Splatoon 2 adds some great new weapons and decent new modes, but an over-reliance on the its familiar formula keeps it from feeling like a full-blown sequel.

Gaming Trend's resident amiibo collector, Matt's a lifelong gamer with a soft spot for Nintendo. As a new father, Matt often struggles to stay as involved as he has been in years past but can always be counted on to come back for some engaging geeky conversations. A resident of Philadelphia, he is currently working on building up his Man Cave with all things Marvel, Star Wars, and Video Games. As an old-school gamer, Matt firmly stands by his belief that gameplay will always be more appealing than story.
Related Articles: Splatoon 2
Share
Tweet
Share
Submit