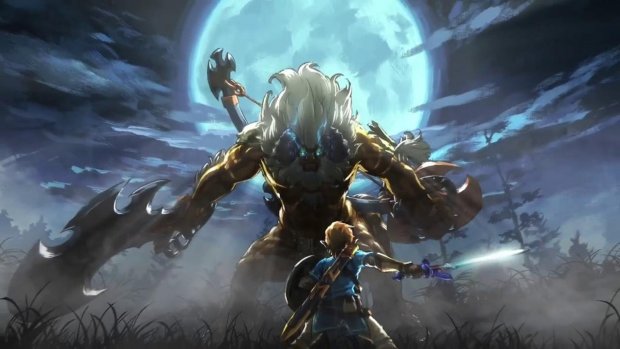 The centerpiece of this DLC pack undoubtedly comes in the form of the new Trial of the Sword side quest. Unlike The Champion’s Ballad, Breath of the Wild’s other story-based pack coming later this year, Trial of the Sword offers no major new storyline or gameplay hook. Instead, this questline tests just how well players mastered combat and survival skills during the dozens of hours that Trial of the Sword expects them to have sunk in. Although it can be played anytime after acquiring the Master Sword, this is absolutely intended as post-game content, and Trials of the Sword is all the better for it — even Breath of the Wild’s most hardened fans will find this DLC packs a considerable challenge.

Stripping you of all your high-level weapons and armor and leaving you with nothing but the scant supplies littered around Trials of the Sword’s challenge rooms, this DLC is a true test of your knowledge of the game’s mechanics. Each enemy encounter forces you to have a plan in mind rather than charging headlong into battle; the slightest mistake could send you all the way back to the Trials’ bottom floors. Environmental weak-points, inventory management, and cooking optimization are just a few of the ways that Trials of the Sword tests how creative you can be with limited resources. Much like the main game’s Eventide Island, but on a much larger scale, this is a fantastic test of strength that takes what Breath of the Wild does best and forces you to adapt and use your know-how to succeed.

The rest of The Master Trials’ new content comes in the form of a few new items that vary in terms of usefulness. New features like Hero’s Path, which tracks your movement across the last 200 hours of play, and the Travel Medallion, which allows you to instantly teleport back to any spot in the game, are both hugely helpful tools to have, but will unfortunately probably only have limited use considering The Master Trials appeals towards players who have already sunk significant time into Breath of the Wild. New items of clothing from other Zelda games, such as Majora’s Mask and Midna’s Helmet, are really fun throwbacks to other titles and offer some entertaining, albeit brief, search quests but ultimately feel more like novelty items. And lastly, Master Mode is a neat addition that significantly increases the difficulty of a game that already offers a steep learning curve in its opening hours — this mode will likely only appeal to the most hardcore of players.

The Master Trials may not offer anything significant for the casual Zelda fan. This is content clearly geared towards players who have already conquered most of what Breath of the Wild has to offer. But for those players who have already invested significant time, The Master Trials is an exceptional addition that serves a true test to everything they’ve learned. It may not have the same appeal as the story-based quests coming later this year, and many of the new items may be nothing more than a novelty, but The Master Trial’s dauntingly difficult new questline offers some of the best content in all of Breath of the Wild.

With over 400 hours across 2 versions of Breath of the Wild, I thought I would be more than ready to take on anything that the Master Trials, the game’s first DLC pack emphasizing greater challenge, would throw at me. Having nailed the timing for parrying Guardian laserbeams, taking down countless silver Lynels and having done a three-heart challenge run, I felt pretty confident in my combat prowess. Words cannot describe how immediately I was humbled by Master Mode and the Trial of the Sword, but I can do my best.

Opting to forego trying out the Trial of the Sword on my completed file right away, I dove straight into Master Mode, the game’s new, more challenging take on the main quest. Right away, I knew that this was going to be a very different game than the one I had played for so many hours. On paper, the mode sounds like a fun challenge — every enemy is one tier stronger, they regenerate health over time, you are much more easily detected while sneaking, and there are new enemy spawns to make previously easier areas more difficult. In practice, however, I quickly found out that this meant I would be running like a coward from most confrontations early on and focusing on scavenging and saving as many weapons and resources as possible.

After dying on the Great Plateau a handful of times and learning the lessons of Master Mode the hard way, however (of course there’s a Lynel up there now. Good. Great. I’m glad they did this), I began to greatly enjoy the added depth that the daunting extra difficulty brings. You need to choose your battles very wisely, find ways to save as much durability on your weapons as possible, and use food and elixir effects to maximize your survivability. Even after finally making my way off of the plateau and into the game proper, there were still new things the game threw at me that conflicted greatly with the learning curve of the game’s normal mode. Guardians can actually change up the timing of their shots now, so the audio cues and muscle memory that I’ve built up ended up being my downfall. It’s such a small change, but it’s a brilliant way to make the game that much more challenging.

So, after dying quite a few more times, I decided to take a break from Master Mode and check out the Trial of the Sword. Again, this side quest gave me much more trouble than I thought it would, and made me realize how dependent I had become on armor, food, and the Champion powers. However, the reward of an upgraded Master Sword is well worth the effort, and becoming more adept at Perfect Dodges and inventory management is a reward in and of itself. The three sections that the Trial is broken up into (Beginning Trials, Middle Trials, and Final Trials) offer a tough, but reasonable difficulty progression. I still have yet to finish the Final Trials (an unfortunate death near the completion of the final floor has left me too salty to try again at the current time. I wasn’t even in that fire blast! Over 20 hearts of damage with one attack?! This is shenanigans!), but I’ve still had a blast with it so far. Once I get to it on Master Mode, on the other hand . . . I’m already terrified.

Overall, the Master Trials has definitely given me a ton more to do in Breath of the Wild. The new armor and items added with the pack are a fun nod to some of the best games in the Zelda series, and were clearly crafted with much passion and care. The Hero’s Path mode is great for completionists who are looking to snag that 100% map completion and all 900 Korok seeds (and works great in tandem with the new Korok mask), and the Travel Medallion is quite the convenient tool for traveling the world. But for me, and anyone else who was craving more challenge and another chance to explore the ruins of Hyrule with a more brutal twist, the meat of this DLC lies in Master Mode and the Trial of the Sword, and these two additions definitely do not disappoint.

The Cave of Ordeals from Legend of Zelda: Twilight Princess was something I have fond, but also frustrating, memories of. I loved fighting through floors of enemies to earn rewards along the way. When I learned that something similar was being added to Breath of the Wild, I was ecstatic.

Trial of the Sword surpassed my expectations. It’s similar to Eventide Island and separated into three parts, all of which require you to destroy every enemy in the room. This is definitely a challenge without your weapons. But starting with nothing and having to scavenge my way through the rooms reminded me of a roguelike experience. In a way, it made me want a roguelike Legend of Zelda, but that could be a recipe for disaster.

My biggest complaint with the Trial of the Sword is the reward itself. While it’s nice to have a fully powered up Master Sword at all times, it still has durability and can run out of power. Since it’s the reward for completing one of the most difficult challenges in the game, it’d be nice if you were finally given an everlasting weapon.

Master Mode was also an interesting addition to the game. Since all of the enemies are leveled up, starting was one of the most challenging parts. Blue Bokoblins aren’t fazed by your puny sticks, mortal. Once I got out of the Great Plateau (and away from that dastardly Lynell), Master Mode became much easier. Like Noah said, you have to choose your battles wisely. Unfortunately, most of my time was spent running away. I felt like I needed to save my stronger weapons for enemies I had to kill, and I simply used bombs to push away any enemies I didn’t want to deal with. The floating platforms, however, were the best addition to this mode. I knew something great was waiting for me, and like a boomerang waiting in a chest at the end of several platforms, it was rewarding.

The new outfits were neat, but being unable to level them up made them feel useless. Why would I play as Tingle if I can’t crush everything in my path while doing so? It would only lead to some funny photo moments that get old after a while. However, Hero’s Path mode was much more useful than I thought it would be. Thanks to it showing you your entire path over the past 200 hours, I was able to find areas of the map I hadn’t explored yet despite having found every shrine.

The Master Trials was an interesting attempt at a first DLC pack, but I really hope that the next pack offers more dungeon opportunities. This felt like a bunch of separate ideas crammed into one pack, which isn’t necessarily a bad thing as it did add some much needed tools (Hero’s Path, Travel Medallion). Trial of the Sword, however, was a fantastic challenge, and I cringe at the sheer thought of tackling it in Master Mode.

The Legend of Zelda: Breath of the Wild -- The Master Trials

The Legend of Zelda: Breath of the Wild's first DLC pack, while not essential, tremendously capitalizes of the game's fantastic mechanics.

Gaming Trend's resident amiibo collector, Matt's a lifelong gamer with a soft spot for Nintendo. As a new father, Matt often struggles to stay as involved as he has been in years past but can always be counted on to come back for some engaging geeky conversations. A resident of Philadelphia, he is currently working on building up his Man Cave with all things Marvel, Star Wars, and Video Games. As an old-school gamer, Matt firmly stands by his belief that gameplay will always be more appealing than story.
Related Articles: The Legend of Zelda: Breath of the Wild -- The Master Trials
Share
Tweet
Share
Submit