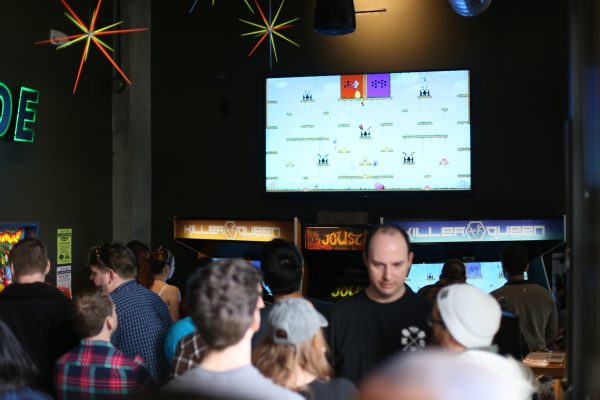 On Saturday, March 4th in the Castro district of San Francisco, California more than sixty millennials gathered to participate in an arcade game tournament. The small, crowded bar was packed with cheering fans, curious onlookers, and animated players glistening with sweat from the heat of competition. The commotion from the event spilled out into the street, and a group of passersby stopped to ask, “What’s going on?” to which enthusiastic attendants replied “Killer Queen! Have you played?” The outsiders exchanged confused glances with one another before answering, “No. What is that?”

It’s a question one imagines the community gets all the time, and the chief inquiry that led me to a loud, humid bar filled to capacity at noon on a Saturday. To answer the question, I spoke with Brian Lee, a prominent member of the Killer Queen competitive scene. Brian is short, with a full beard and thickly-framed glasses, and has a bit of a hipster vibe. He’s the kind of person you might assume is a local just by looking at him, and as a passionate representative of the San Francisco competitive arm of Killer Queen, that’s a good thing.

“Killer Queen is a 10-player, competitive arcade game that’s only been around for about four or so years, but has gained a huge following. [The game] is divided into two cabinets, or teams, with five players on each team, and the goal is to beat the other team through a military victory, an economic victory, or a snail victory.”

After watching a few matches play out, I begin to understand. As the game’s name alludes, Killer Queen is all about bees. The game has an old school 2D aesthetic, and focuses its theme around the pollen-carrying flying insects that stung you as a child. Each of the two teams consists of four players who take on the role of drones, and one player (situated in the middle) is the queen. The game essentially plays like a more complex version of the arcade classic “Joust.” Most players fly around attempting to stab one another with the pointy weapons each of their characters carries with them, and engage in the never-ending struggle to maintain the high ground.

The three forms of victory that Brian described are strategically unique ways to beat the opposing team. Perhaps the easiest way to win is via an “economic victory,” wherein the drone players gather purple berries from the map, and store them in their hive. If one team is able to stow away a dozen berries, they win. For players with a bit more of a bloodlust, there is the “military victory,” wherein one team simply assassinates the opposing team’s queen three times to claim triumph. Finally and most curiously, there is the “snail victory,” wherein one team must climb atop a large snail located on the map, and ride it slowly to the opposite side of the map to win. Each option lends itself to a different style of play, the preference of which might vary depending on the skillset of a given team.

Amid the shouting, cheering, and occasional smack-talking, Brian explained to me why he was drawn to Killer Queen: “It’s all about dominating the other team, of course. I mean, we’re all here to win at the end of the day.” Brian, whose team is aptly named #SorryNotSorry, is a bit on the competitive side, and it shows. “I come here at least twice a week most weeks, and play for two or three hours when I’m here. You need to play a lot to stay competitive. You never know when a new crew is going to start getting good, and the next thing you know you’re getting bodied [i.e. badly beaten].”

Though the sense of fierce competition is palpable on a day like today, behind the rivalry lies a growing community of friends who have found a shared interest in the oddest of places. Looking around the establishment, more than sixty people from five different cities can be seen socializing and sharing gaming tips over a round of beers. And at this point it dawns on me that, though we live in an age where the arcades of the 80’s and 90’s have slowly vanished from the mainstream of American culture, the generation that loved the arcade culture has clearly survived. And at least part of that generation has found a home in an emerging trend: the arcade bar. Brian summarized the phenomenon well when he told me, “We love games, but we’re adults, ya know? So we want a place where we can drink, and compete, and grow our community. Killer Queen has really paved the way for the ‘barcade.’ This game requires you to come out in person. So if I do something stupid, my teammate can say ‘Yeah, you probably shouldn’t have done that. Next time try this,’ and we all grow and get better together. It’s very different than staying at home and playing online.”

One competitor, Belia Portillo, flew to SF from Chicago and shares with me the story of how she got involved. In stark contrast to Brian, Belia speaks softly, and seems to be more interested in having a good time with friends than the competitive aspect of the gathering. “I live a few minutes away from a bar with a Killer Queen cabinet, and the funny thing about Killer Queen is that it’s no fun without ten players, so if they need more people to play they just sorta shout out to the people at the bar to come play with them. A lot of people get roped into playing this way, myself included, and I’ve been addicted ever since. I was hooked immediately.” Belia says that she loves the game and enjoys competition, “but the community is what keeps me playing. I probably wouldn’t be playing anymore if it wasn’t for the community. I met some of my best friends through [Killer Queen].”

Another player from Chicago, Andrew Quang, echoed Belia’s sentiments. “I ended up playing Killer Queen on a team of people I’d never met before, and one of them is now my roommate! We’re all friends now. It’s been a crazy journey. I never thought I’d be traveling for a video game. I mean, I work as a business analyst! But I began to really love the community, and here I am. It’s hard to stay away.”

In my brief time with the world of arcade bars, I found it to be a vast ocean of contradictions. The players simultaneously praise the community as competitive and casual, intimidating and inviting, decidedly serious in purpose, while entirely social in tone. Killer Queen has become a unifying force for an eccentric group, which thrives in this unique space that’s in the early stages of defining itself. And the phenomenon shows no sign of slowing down. A few years ago when Killer Queen launched, the “barcade” was a fairly new phenomenon, and Killer Queen had only four or five cabinets in the country. Since then, the number of arcade bars has steadily increased and Killer Queen cabinets have risen to a total of 25 cabinets, which is an impressive feat given the obstacles involved in procuring and maintaining a Killer Queen cabinet. The game has an extremely high price tag for businesses to implement ($11,500-$14,000, depending on desired features, plus maintenance costs), and occupies a large amount of valuable floor space (an area that could fit as many as seven other arcade cabinets).

The tournament I attended took place at “The Brewcade,” which is located on Market Street in San Francisco, and opened in 2014. It has since become a staple in the “barcade” movement. That said, the venue, Killer Queen, and arcade bars in general remain a part of a fairly small niche. This is something that Brian Lee hopes will change in the coming years, “I just want people to know that we exist. Killer Queen and ‘barcades’ in general are awesome, but a lot of people don’t know about them. I want more people to participate. You don’t need to be a ‘gamer,’ or the type of person who hangs out at bars. We welcome everyone, and we’ll teach you how to play. Don’t be afraid!”

When asked who he would recommend Killer Queen to, Andrew Quang suggested, “If you played fighting games a lot, you’ll love Killer Queen. There’s a lot of strategy involved, and teamwork, and a heavy focus on communication. We’re a community. We’re always looking for new people to join us.” If you’re interested in giving Killer Queen a try, you can visit The Brewcade in San Francisco, or one of the other 24 venues where the game can be found. Who knows? Maybe someone will shout over to you, and demand that you join in. But Killer Queen is not for the faint of heart. As Andrew put it, “Our community might be a little intimidating to some. The game only has one button, but a dozen strategies and a million egos.”

You can learn more about Killer Queen on their website, and join the KQ community on Facebook