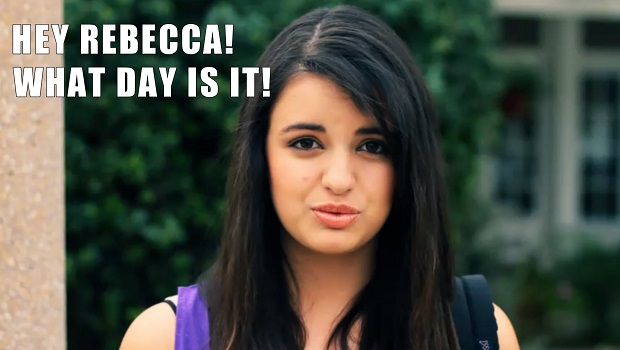 Josh is currently out of commission (but he should be back soon!) so in the meantime, Elisha’s taking over the TGIF lineup this week with a different picture. With Hey! Pikmin out today, a reported 4.7 million Switch units sold, and some of the biggest summer games getting released soon, what are our editors up to this weekend? (Also, enjoy some outdated memes!)

Elisha Deogracias – Waking up at 7 AM in the morning
Fun fact, Rebecca Black’s Friday is more than six years old! Man, time flies, doesn’t it? Speaking of time flying, it’s hard to believe that the Switch has been out for nearly five months now, and we’re getting some pretty sweet games in the coming months. I’m probably going to replay Mighty Gunvolt Burst, what with those disappointing boxes reminding us that Mighty No. 9 was… well, a disappointment. Plus, there’s free DLC for Burst, so it’ll give me a reason to take it for a ride again. I’m finishing up my Layton Mystery Journey: Katrielle and the Millionaires’ Conspiracy playthrough and let me tell you, it’s a great mobile title. Other than that, I’m probably hosting a small gathering on Saturday, so it’ll be the perfect time to bust out some Overcooked (PS4 probably, but I’m planning on getting the Switch version too) and Jackbox Party Pack. It’s a party, yo!

…It’s a party unless you have summer school this semester.

Sean Anthony – Editor and still Rank C-
There is a reason I don’t play many team-based online games. I’m a sore loser and a sore winner, especially when there is the pressure of losing your rank involved. I’ll be attempting to get to rank B- in Ranked Battle mode in Splatoon 2, but I’ll end up at the bottom of C- again like I did yesterday morning!

When I’m done getting frustrated at my lack being able to cooperate efficiently, I’m going to give Hey! Pikmin another shot. I still have a few more treasures to get and stages to clear without murdering a single Pikmin. Heck, maybe I’ll play some of the first Pikmin for old time’s sake.

Noah McGuire – Editor and farmboy
The news of Stardew Valley’s Switch release getting delayed was bittersweet for me – on the downside, I’ll have to wait longer to get my farm on the go, but on the bright side, it resparked my interest in the game and got me to start a new file! I’m taking a break from inking up turf in Splatoon 2 this weekend and just enjoying some time relaxing and farming. And mining. And fishing. And monster…hunting…I’ll be so busy relaxing!

In his free time, Noah likes telling people the time in Overwatch.

Ron Burke – Editor in Chief, stuck in the virtual world
If you’ve been following our YouTube channel lately, you know I’ve been doing a lot of video work. I’ve also been spending a great deal of time in Virtual Reality playing things like Gunball, an early build of The Wizards, and Archangel. The Wizards is uhhhmazing, as is Archangel for satisfying the amazing power fantasy of being a spell-slinging badass or a giant stompy robot. I’ll be playing more of both of those, to be sure.

I’m also playing a bit of Solstice Chronicles: MIA (What if Dark Souls met Helldivers…it’d be this) and I’ve got a few hardware things in the works. It’s gonna be a busy, but fun, weekend!

So what are you going to be playing? And do you consider ice cream to be a breakfast food? Sound off in the comments below, and stay tuned for more news here on Gaming Trend!