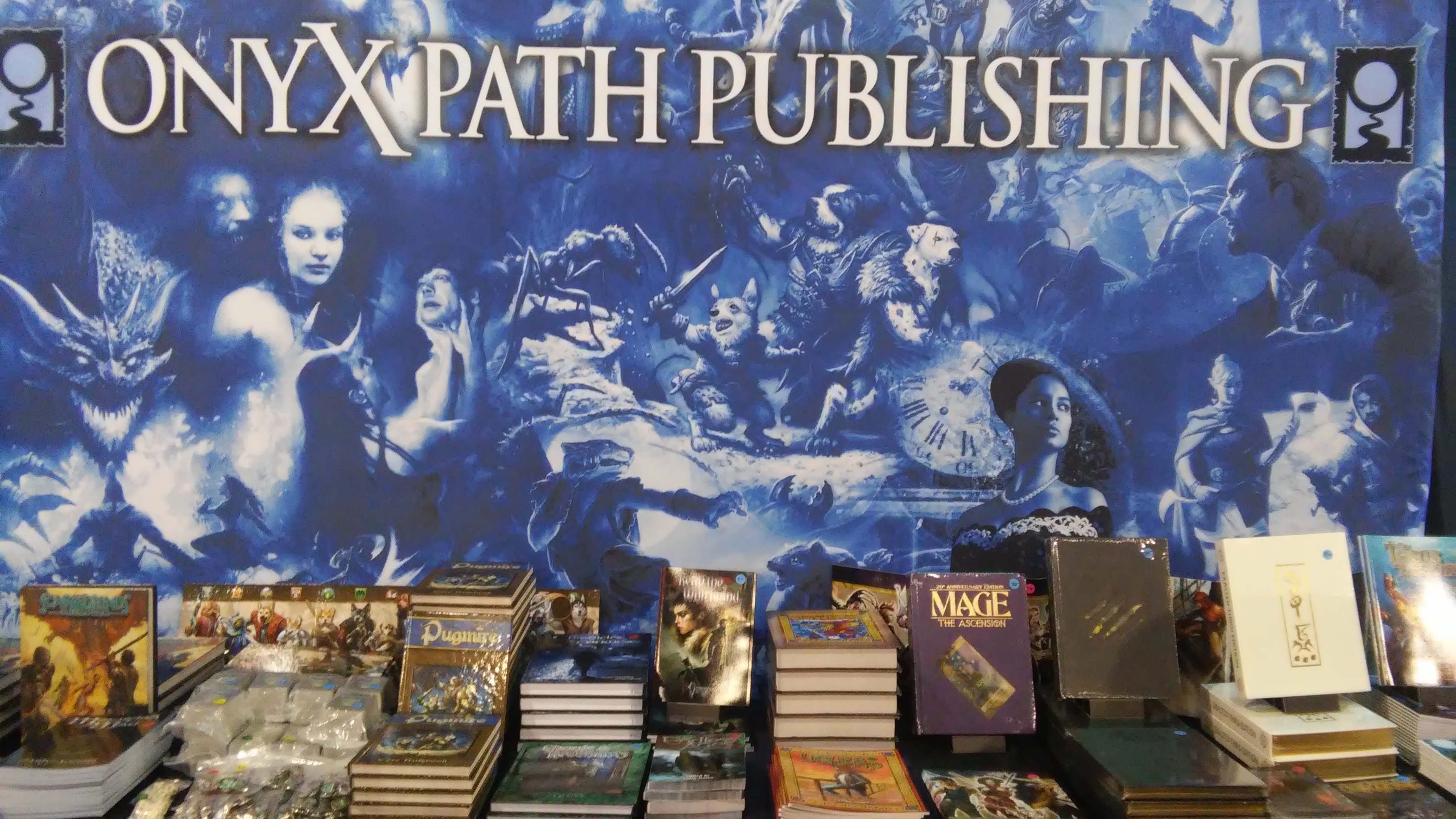 Onyx Path has spent the last few years shepherding and redefining the World of Darkness franchise, and has finally been able to stabilize enough to explore other avenues. I spoke with company founder Richard Thomas about the frustrating past and bright future of the Onyx Path. Yes, rising from the ashes of White Wolf that was, Onyx Path had its birth working for CCP, a company that did little to help the franchise. Often either ignoring the tabletop side or randomly tying its hands, CCP spent its efforts developing an MMO that later faded away into nothing.

Now that Paradox Interactive has bought White Wolf, Onyx Path is able to work with a more involved and helpful group of developers, giving it the support from the outside that it had been working to cultivate within its own workplace.

While Onyx Path is continuing to expand its World and Chronicles of Darkness lines, bolstered by the enthusiasm of White Wolf entertainment, some of its most exciting upcoming work belongs to separate creators or to Onyx Path itself. At long last, we are expecting new editions of Scion and the Trinity universe, fueled by the narrative action engine known as the Storypath System. While character sheets look familiar in Storypath, dice pools do not work on a binary success/failure system. Rather, difficulty sets a sliding scale for your dice pool, which makes successes or failure partial, aiding narrative play. Failure also generates momentum, a pool of points which you can your team can use to power your abilities, ramping up the intensity as the game goes on. And they say losers never win.

Onyx Path will also be expanding its creator owned games, working with developers to produce their games while letting the creators maintain control. The new Pathfinder and 5E editions of Scarred Lands, the mythic fantasy setting inspired by Greek mythology, was set to be the first of such properties, before the untimely passing of Stewart Wieck recently. His legacy is impressive, and getting carried on: the setting is already seeing plentiful support. The player’s guide is currently out, as well as supplemental adventures and player options, but additions to all of these are already in the pipeline.

Pugmire is one of these additions; it is the post-apocalyptic fantasy setting in which players are dogs dedicated to spreading the Code of Man. Humanity is lost, and dog-kind is left to pick up the wonders left behind. Pugmire is already in store shelves and available through online purchase, and Monarchies of Mau is soon incoming as well, expanding the game to new countries, and species. This family themed game is partially intended to give players a more palatable way to approach racism, pitting the nations against one another. The simplified 5E ruleset makes it incredibly approachable as well. My favorite bit of the lore is the Cult of the White Mice, former subjects of human experimentation who desire to continue the work of their masters, on whoever they can capture.

Cavaliers of Mars, a post apocalyptic fantasy game reminiscent of Princess of Mars. Its new system focusses on bringing a character’s past and personality into the mixture, building a simple dice pool based on relevant aspects to any task. The Kickstarter ended recently, but if you are curious you can check out the preview for a look at its systems and themes.

Each of these works are distinct in terms of presentation, mechanical development, and art style, and they are only the beginning. Now that Onyx Path has seen several such products through to completion and bolstered its numbers with new staff, it is ready to expand its creator owned projects, and has recently put out the call for developers familiar with 5E, should you know of anyone with the right talent. While the timing isn’t right yet, I have been told that come Midwinter 2018, we can expect new announcements from this front.

I will be reporting on these and other products, but you can also find information from Onyx Path itself. Every Monday evening it gives fans a comprehensive overview of the status of its product lines, and the team is very responsive to (respectful) questions.