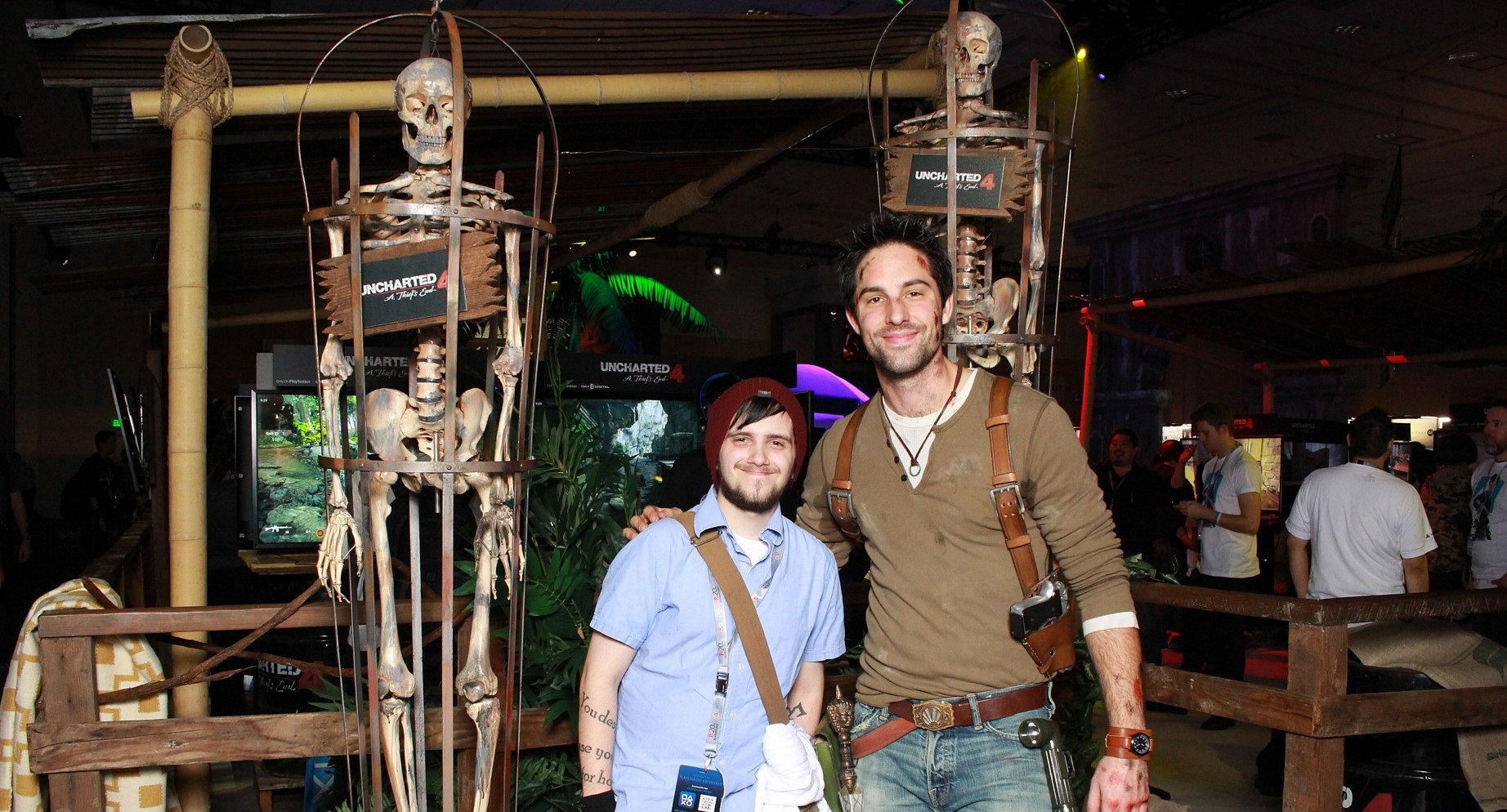 As a fan of PlayStation, one of my favorite things to do when I’ve attended PlayStation Experience, as well as even events like E3, is to see the characters that Sony has roaming around the showfloor. Some of these paid cosplayers are there to help market upcoming games, but there are also a few from dormant IP that tap into the nostalgia that PlayStation Experience is meant to evoke.

On the second day of PlayStation Experience, I embarked on a quest to find each of Sony’s characters brought to life, but I’m pretty sure a few of these impressive recreations may have actually been from those attending the event, but just happened to be so well-done that I thought I was posing with a professional. Here are my findings.

Up first was Tearaway messengers Iota an Atoi. I found the two accompanied by an event representative as they were, as Double Fine’s Tim Schafer put it, “making lewd gestures” at him as he spoke on PlayStation’s livestream. In their defense, they were merely blowing kisses at the gaming legend, but took a moment from their antics to take a photo with me.

Not long after seeing my Tearaway friends, I stumbled upon Asobi from the PS4’s Playroom. I didn’t tell him that, despite the thing being pre-installed on my console, I had never played his game though. I figured that’d break his little heart.

After shedding my jacket and scarf because being in a convention center with several other hundred people is too hot for winter wear, I found a squad of Guardians standing near the Destiny booth where Bungie was hosting demos for the game’s new Sparrow Racing mode. In hindsight, I realize not doing some sort of badass pose makes me look all the more out of place next to them in their decked out outfits and their small collection of deadly weapons.

About an hour later, I headed over to the Ratchet & Clank area where Sony had setup not only a makeshift movie theater (complete with popcorn) that was periodically playing footage from the film adaptation coming out in April. On the opposite side, I found Ratchet posing for pictures on his own personal red carpet. The lombax greeted me with open arms.

On the opposite end of the spectrum, Kratos’ rage wasn’t withheld when I asked him for a picture on the PlayStation Experience showfloor. The nervousness I felt when a Blade of Chaos was at my throat was only outweighed by my awareness that it was the only way he knew how to grieve the loss of his family. Or maybe Kratos is just a super angry dude.

Thankfully, to counteract the violence, I then took a photo with the cast of LittleBigPlanet 3. I briefly wondered whether or not children were portraying Sackboy and company, but the immediately remembered that I, a 23-year-old man, was at eye-level with most of them.

In the middle of break from all the chaos and noise of the showfloor, I was sitting next to some of the Gaming Trend crew when I saw a glimpse of a red-robed figure across the room. Mid-sentence, I ran over to take a picture with The Traveler from Journey. Just like in the game, they didn’t speak, they merely nodded to acknowledge my thanks.

Next up, I found Nathan Drake posing next to some skeletons hanging next to Uncharted 4 booth where fans were lined up to play the game’s multiplayer mode. After dozens of action-oriented pictures with passersby, I decided to give Nate a break from pretending to punch and shoot people to take a more relaxed picture. The guy running the camera at the booth said that I looked “really happy,” in the picture, to which I told him it was “the only face I know how to make.” Nathan Drake himself jumped to the rescue, saying it was “a good face.” What a guy.

I later found myself reunited with my good friend Sly Cooper, who I saw at PlayStation Experience last year, and am still waiting for a chance to see again in game form. But I suppose I’ll have to wait for the film adaptation next year before Sony considers resolving the cliffhanger of Sly Cooper: Thieves in Time.

Right after Sly, I met a Helghast soldier. His gun actually was originally covering my face until I realized that and had to stop him for another picture. Despite his villainous nature, he was incredibly nice.

Lastly, I met up with Wilson and Wendy from Don’t Starve. Look how classy they look. Those poses, though.

So those were all the wonderful cosplayers I saw at this year’s PlayStation Experience. I know for a fact I missed out on finding Gravity Rush’s Kat, who never seemed to be next to the Gravity Rush: Remastered demo when I needed her. I can’t wait to see what characters Sony has walking around at next year’s show.

For more on PlayStation Experience, keep an eye on our coverage hub.