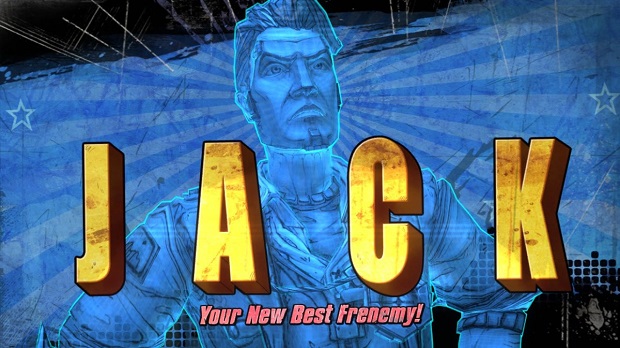 There aren’t many characters in games that have grabbed me as quickly as Borderlands’ Handsome Jack.

Unlike most fans of this Hyperion dictator, my first exposure to Handsome Jack was through TellTale’s Tales from the Borderlands (which I’m currently reviewing here at Gaming Trend), and in the few hours that he appeared in this adventure game spin-off, Borderlands’ signature villain made a huge impression on me.

Jack’s appearance as an AI in Tales from the Borderlands is the reason that TellTale’s adaptation is currently at the top of my Game of the Year list. Originally a man I only knew by reputation, Jack’s charisma, sense of humor, and dashing good looks won me over in the hours I spent playing Tales’ second episode “Atlas Mugged.” For more than any other reason, I wanted to go back and play Borderlands 2 and The Pre-Sequel to understand this enigma of a villain, which made the recent release of the Handsome Collection pretty perfectly timed.

Borderlands 2’s focus on the past of the original Borderlands vault hunters meant that Jack was pretty absent early on through the game’s campaign, having pretty much existed solely to taunt me over my walkie. It wasn’t until the midpoint, where Jack was revealed to have been holding his daughter Angel prisoner in order to utilize her abilities, that this one-liner spewing antagonist became someone that felt like a legitimate threat. That level of intimidation and danger stayed with Jack up until the point where he was killed, revealing a branding of the vault symbol underneath the mask he wore through the entirety of Borderlands 2.

Unfortunately, Borderlands 2 ended on a rather abrupt note, with the most interesting character in the game’s death being treated with little ceremony. As the player, I still had a ton of questions about the man I’d just slain, only to be very quickly ushered to the credits.

Even so, in Jack’s final moments, he swore that I was the villain of this story, and that he was the hero. Jack was steadfast in his belief that everything he did, from imprisoning his daughter to awakening a monster capable of obliterating entire civilizations on Pandora, was all for the greater good. The fact that Jack’s final words were of someone who was far more gray than the cartoon villain I met in Tales from the Borderlands made me all the more interested to learn about the man behind the mask.

”You’re a savage! You’re a maniac, you are a bandit, and I am the goddamn hero!” – Handsome Jack

Thankfully, I was able to immediately jump into the Pre-Sequel, the game meant to act as Jack’s origin story. I had assumed that many of Borderlands 2’s fans had just as many questions about Jack as I did after finishing the game, and naturally thought that the Pre-Sequel’s focus on a pre-mask Jack would give me the answers I so desired.

At the beginning of 2K Australia’s try at Borderlands, Jack is working as a lower-level Hyperion employee, and seems to genuinely have concerns for the innocent lives of Pandora’s citizens. This man seemed to be a far cry from the one I met in Borderlands 2, so I proceeded to play Pre-Sequel waiting for a turn; something that would show Jack turn from man into monster. But as the game went on, I saw that there was no turn to be seen, and that a mask was almost all that seemed to be missing. Jack is a well-intentioned man, only wanting to protect Pandora from undesirable bandits and other villains, but is still willing to go to unforgivable lengths to do so.

Pre-Sequel has horrific moments where Jack orders the player to carry out inhumane acts like wiping the entire personality of a recently-freed AI in order to create a weaponized robot line, and killing an entire group of scientists on the off-chance that one of them could be a double agent working for Jack’s enemies. These scenes show that Jack, while believing himself to be a heroic renegade willing to do what it takes to save others, is in reality a lunatic unwilling to consider the long-term consequences of what he believes will take to make Pandora a peaceful paradise for its inhabitants.

It’s so easy to point at Jack and call him a bad guy, but I was happy to see that he wasn’t just a cackling psychopath who was doing everything he did for his own gain, even if it was ultimately to paint himself in a glorified light. The prospect that I was seeing a more compassionate man become one that was widely feared across an entire planet was exciting, and made me all the more eager to finish the Pre-Sequel to see Jack’s transformation finalized.

However, my coming into Pre-Sequel with a pre-conceived idea of Jack meant that the actual moment he found himself needing the mask he wore in Borderlands 2 could have only resulted in disappointment, as the Pre-Sequel’s final moments are just as brief and abruptly ended as Borderlands 2’s. Jack has earned the ire of the original Borderlands’ vault hunters and has opened a vault containing information about the Warrior from Borderlands 2. Pre-Sequel adequately sets up the events of Borderlands 2, but not without lazily phoning in the defining moment that makes the Handsome Jack that has become pretty iconic over the last generation.

As Jack enters a vault, he interacts with a relic shaped like the vault symbol that imprints information about the Warrior into his mind. His experiencing this revelation is interrupted by one of the main characters in the series, Lilith, coming in and punching through the relic and into Jack’s face.

This act brands the vault symbol onto Jack, but then Lilith simply walks away as if she’s efficiently finished the job. Jack swears vengeance on the vault hunters and promises that he’ll unleash the Warrior, but Borderlands: The Pre-Sequel doesn’t take a moment to breathe or really emphasize the significance of what’s just happened. Handsome Jack was born in this instance, but it’s treated with little fanfare, and is abruptly and nonsensically ended due to the narrative restriction inherently found within prequels.

Seeing Jack handled by three different studios has been an interesting way to experience the character. Whether it was Gearbox, 2K Australia, or TellTale, Jack has been the same charismatic psychopath, but even when Borderlands 2 and the Pre-Sequel made attempts to portray Jack in a more sympathetic light, one was perhaps too late into the game and the other dropped the ball when it mattered most. With Borderlands 2 and Pre-Sequel done, the ball is now entirely in TellTale’s court. This is why I’m hoping that TellTale will take note of the fact that Tales from the Borderlands’ version of Jack is unaware of many of the events in Borderlands 2, in order to show a more repentant side to Hyperion’s boss; one that will redeem this character who is clearly more intricate than his well-known sense of humor and insanity.

Tales’ portrayal of an AI version of Jack is the most humbling state the character’s ever been in. He doesn’t have the luxury of being the loose cannon he was in life, and has to rely on and even protect Rhys, the cyborg he resides in. When Jack gets his proper introduction in “Atlas Mugged,” he’s referred to as “your new best frenemy,” referencing that for the first time, Jack is having to work with others instead of merely threatening or paying people to work for him. I can’t be sure what TellTale has planned for Jack’s appearance in Tales from the Borderlands, but I’m hoping that since this is the first time the character has been set up to be a real hero instead of the idealistic but unhinged one he thinks he is, the studio will take advantage of this situation Jack has found himself in to make its adventure game a redemption story for the most dangerous man on Pandora.

The end of “Atlas Mugged” has players choosing to trust either co-protagonist Fiona or Jack in a dire situation, which could be setting off one of two possible arcs for Jack’s AI depending on whether or not Rhys is willing to work alongside Jack or against him. Seeing his reliance on Rhys create a bond between the two throughout the episode has me hopeful that we’re being set up to see Jack to actually relate to someone on a level he hasn’t prior. Since this Handsome Jack AI doesn’t seem to know about all the events of Borderlands 2, he could potentially learn about events like Angel’s death and the fact that he lost, and react to these things outside of the moment.

TellTale has an opportunity to show the self-proclaimed savior Handsome Jack thought he was in Tales from the Borderlands. TellTale could be the one studio who has had a chance to write for this character to actually show a version of Handsome Jack that is genuinely a hero, and not a man who is terrorizing the population in the name of his own vision of peace, even if his heroic acts are just from helping Rhys and Fiona.

Bringing a character as nuanced and morally-gray as Handsome Jack back from the dead just to have him experience no growth or reflection on his past mistakes would feel wasteful of the opportunity TellTale has been handed in my eyes, and players who have met him in past games would have no reason to ever trust the villain if he is showing no signs of remorse, or at least valuing the lives of those who he’s been forced to work with.

While it’s true that there are pretty loose definitions of morality in the Borderlands universe that are all pretty much determined by which side you’re on, I would like to see Jack perhaps be willing to combat Hyperion on Rhys and Fiona’s side because he realizes that how he and the company tried to “save” Pandora was the wrong way to go about it. What Jack did in life was fear mongering and violent conditioning instead of creating the paradise he claimed he was working toward.

Jack’s AI doesn’t have to be celebrated with bronze statues to be heroic, but I would like to see him not end his appearance in Tales as an enemy of Rhys and Fiona. After everything both characters have already been through together, the idea of Jack backstabbing Rhys for his own gain, especially when anger toward that type of treatment of allies seems to be what drives him mad at the end of the Pre-Sequel, comes off as somewhat out of character.

I don’t expect Jack to flip the flexible morality of the Borderlands series on its head in Tales, but I at the very least want to see him not leave being one of the game’s villains when everything about his position is set up for him to finally grow upward instead of continuing down a spiral of madness.

Playing through each of these games over the past month has really given me a great appreciation for the character that is Handsome Jack. Given the ending of the Pre-Sequel’s framed narrative, I assume that Tales from the Borderlands will likely be the end of Jack’s presence in the series moving forward, and TellTale making Jack the hero he always wanted to be in his final appearance feels like a send-off worthy of the charismatic narcissist that gave a face to chaos of the Borderlands series.