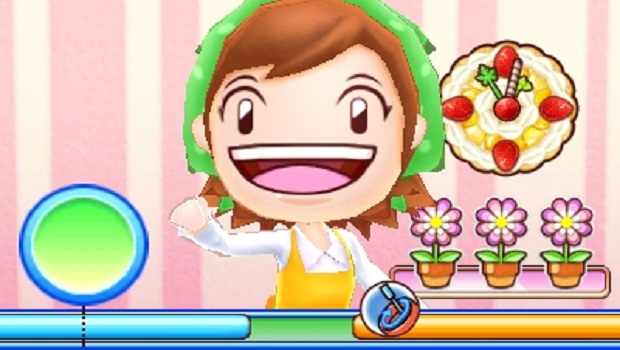 The Wii U is dead, long live the Wii U. While the 3DS is still alive and kicking, a lot of well-established series on the handheld are saying their goodbyes and migrating to “that newfangled Switch machine.” Likewise, it seems that Office Create and Rising Star Games’ Cooking Mama franchise is finally putting its curtains down on its 3DS line of cooking simulators, with Cooking Mama Sweet Shop being its (technically) last entry on the handheld. While it still delivers the same tried-and-true gameplay we’ve come to expect from the series, it does skimp on some features that leave Sweet Shop a bit undercooked.

Originally released in Japan in 2014, Cooking Mama Sweet Shop has now come over to our shores. As the name implies, this game is focused on sweets all around the world, from cookies to Mont Blanc to sakuramochi. I appreciate the diverse range of food showcased in prior Cooking Mama games, and this one is no exception. With over 60 recipes to cook and unlock, there’s going to be something you’ll love to make. Each recipe takes the form of a handful of minigames, where you’ll use the 3DS’s features to boil ingredients, mix some flour, knead dough, and more. This is the same gameplay we’ve come to expect from the series ever since its debut more than a decade ago, and much of it is left unchanged.

Crack crack crack, the egg into the bowl.

The presentation here is encouraging. While the assets are recycled (I’ve heard the same background music for YEARS now), the game still manages to exude a sense of positivity with its main character, Mama Tomoko. Even though her speech is in heavily accented English, her personality always pushes you to do well. She’s basically the anti-Gordon Ramsey, and even if you monumentally mess up, she’ll always just say, “Don’t worry, mama will fix it!” and let you go on your merry way. Don’t ever change, mama.

While I do appreciate the innovative uses of the 3DS (such as using the stylus to clean the screen of some goopy mess as well as some pretty neat 3D effects), some of the minigames are duds and just a chore to complete. For every “fling some nuts as decorations” (much more fun than it sounds) minigame, there is a “memorize five numbers and put them into an oven.” It’s also a bit disconcerting that the minigames you’ll partake in most will be the monotonous ones. Sorting ingredients in a fridge is boring the first time you do it; after a dozen times, you’ll be snoring.

Speaking of a snoozefest, the overall difficulty of the minigames is easier in comparison to previous entries as well. This is a mixed bag, as it allows younger players and those that usually don’t play video games (i.e. my non-gamer parents) to have a good time with the game. On the other hand, it does make the whole thing a cakewalk (pun intended), and you can plow through any recipe with a perfect score easily. Time limits are very lenient, but there are a scant few minigames that have instant lose conditions, so a slow and steady approach is recommended. At times, I can forgive the easy difficulty for being more accessible, but it would have been great to apply stricter time limits and harder challenges akin to the original DS trilogy in a separate mode somewhere.

M-I-X the flour into the bowl.

Aside from the main cooking game, there are some other features to round out the package. Like Cooking Mama 5, you have a shop where you can display your creations and sell them to customers. However, this mode is barebones compared to its predecessor, as you can’t customize anything other than placement and backgrounds, and customers will basically buy anything you put in their faces. This is also unfortunately the only mode where you can make money to purchase unlockable items, so be prepared to grind (and by grind, I mean stare at a screen for minutes at a time waiting for generic character models to buy your randomly placed recipes). The things you can purchase are purely aesthetic, but at least will scratch your completionist itch for progression.

After making a few recipes, you can unlock world challenges. These are slightly longer minigames where you’ll have to do a certain action to one type of dessert, like flinging cookies in a box or separating cupcakes by color. These affairs are score-based compared to the regular minigames, and are a little more enjoyable than the main game. In addition, you can also play minigames with up to four players, which can increase the longevity and encourage some healthy competition with friends. Chopped this ain’t, but it’s still a decently fun time.

Summary: Cooking Mama Sweet Shop is the same game we’ve played for years now. That’s not necessarily a bad thing, but the franchise is starting to get as stale as a month-old fortune cookie. That said, it’s still the accessible cooking game we’ve come to expect, and it does have a couple features worth checking out if you’re interested in a new cooking game.

Elisha Deogracias is an aspiring accountant by day, freelance writer by night. Before writing for Gaming Trend, he had a small gig on the now defunct Examiner. When not being a third wheel with his best friends on dates or yearning for some closure on Pushing Daisies, he's busy catching up on shonen manga and wacky rhythm games. Mains R.O.B. in Smash. Still doesn't know if he's a kid or a squid.
Related Articles: Cooking Mama: Sweet Shop
Share
Tweet
Share
Submit