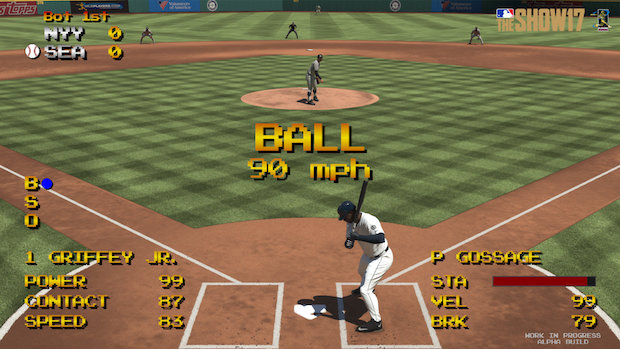 Opening day comes, opening day goes. The same can be said for every new installment in a sports game: it arrives, shows off its new features, and becomes irrelevant the very next year. The MLB The Show franchise has been one of the more impressive in the sports genre, consistently iterating upon itself and bringing new features to the forefront. Last year was one of the series’ best, as it revamped the Diamond Dynasty mode and refined it into something that was much more than just staring at trading cards. On top of that, the small additions, like bringing back the batter stride to visual enhancements. were noticed by anyone that drops the sixty dollars for MLB The Show annually.

But as is the case with sports titles, there are highs as well as lows, where the development team is regrouping and thinking of new ways to bend their product into a finer metal the next year, and may not have enough time to go full force on the next years product. MLB The Show 17 is a perfect example of this.

Granted, it’s not like the development team at Sony San Diego added nothing to MLB The Show 17, that’s far from the case. Something that sports fans call for in basically every sports video game franchise is a fresh coat of paint on the Be A Player or Franchise mode. The Show 17 features just that for their Be A Player equivalent, Road to the Show, even though it doesn’t necessarily stick the landing.

This time around, rising through the minor leagues has a more cinematic feel to it, with a narrator voicing over all of your major career decisions. Early on, the narrator guides you through the High School Showcase leading up to getting drafted, then does the same as you begin to hire an agent, sign with a team, get called up, etc.  This is an interesting addition to The Show, but it never feels like it has any purpose. It doesn’t build drama, it just kind of voices over the motions you’re already going through. Then there are the times where you will get repeated dialogue, such as if you request a trade multiple times, and these make you loathe the deep-voiced announcer more so than appreciate his existence.

There are a few new story elements that your player is forced to go through while progressing to the major leagues. The most notable one is being asked to switch positions. My player, a shortstop, was asked to transfer to right field because the organization had a solid starting shortstop in the majors, and thought I could succeed more in the outfield. Once the idea is pitched to your player, you can choose to react negatively or accept the move. Since I had been training to be a shortstop, I refused to move, argued with the manager, and was ultimately traded to another franchise. This is a great sequence of events, and one that feels organic, but then it kind of ends with no repercussions other than the trade. Your new team doesn’t treat you differently, everything just returns to normal. And no other intriguing story instances crop up so while it’s a really cool thing in the moment, it doesn’t really go anywhere like you would hope. That being said, if the San Diego team can implement more situations like this in future Show games, it could go a long way to fully revitalizing the Road to the Show feature.

In the case of the Franchise mode, very little has shifted from last year. The menus are a bit sleeker and easier to navigate, but handling budgetary issues is still cumbersome and tough to deal with. Actually building a franchise still seems entirely too difficult, especially when you have general manager contracts turned on. This means that if you slip up and miss the playoffs for a few years, you’re done with your organization. The most notable change is a “Critical Situations” option which will help you play in tight games without having to play the full nine innings. As you simulate your year, a prompt will appear in games that are tied or within one run. The prompt offers you the ability to jump into the game and try to make a difference.

The issue is there are 162 games in a baseball season, and one run decides many of those. As of this writing, the Baltimore Orioles are 8 games into the season. Out of those eight games, half of them have been decided by one to two runs. It’s a small sample size, but an example that hopping into every close game, waiting through the load times, and playing out one inning of ball every other game isn’t an enjoyable time. That being said, there is still potential there, especially if the critical situations only popped later in the season, or only in games that were relevant to a playoff run.

In a very unique addition that few people saw coming, MLB The Show 17 features a “retro” mode, which emulates previous iterations into The Show 17. Thankfully, this is not akin to when the NHL franchise simply imported the 90’s NHL games onto the disc. Instead, The Show goes the extra mile and lays a full UI shift over the game’s original visual style. At first it’s a tad off putting, seeing this tonal shift, but as time goes on it begins to feel goofy in all the right ways. As for the gameplay, controls are similar to yesteryear with one button doing the hitting and pitching, and the ability to shift your player all around the plate or pitchers mound.  It’s not something that anyone will make their way to play The Show, but it’s a really fun, mindless little addition that shouldn’t work, but totally does.

MLB The Show is one of the strongest sports franchises around, and nothing is more evident of that than this year’s addition. Not because it brought about a host of new additions that changed everything, but because its tweaks and turns don’t all work out, but it’s still a hell of a game to play. Sony San Diego seems to be in a point where they can do almost anything, see what sticks, and remove anything that doesn’t. That’s what brings about wild perks like the Retro mode, and even slip ups like the new additions to Road to the Show. Thankfully, it’s pretty easy to shutout those negatives and just enjoyable a game of America’s favorite pastime.