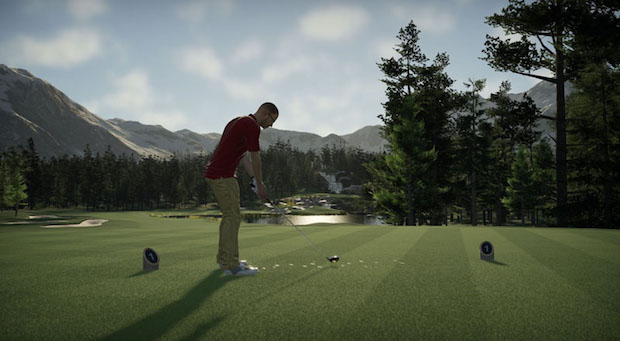 Games have been relying on user-created content for years now with games like LittleBigPlanet and Super Mario Maker making a killing off the concept. When The Golf Club released in 2014, its unique means of generating created courses made it clear that the franchise was heading in a different direction than the traditional PGA games. Instead of grabbing the PGA license, developers HB Studios were focusing on building a unique world filled with wild user creations. At the time, it worked, but there was still a lot to be desired when it came to replayability.  In The Golf Club 2, HB Studios attempt to rectify that con by adding a form of career mode, online societies, and character customization. But all of this is relied upon with the hope of user-generated content holding it up, a bold move that doesn’t always pay dividends.

Golf isn’t a sport you immediately associate with personality. In basketball, you have stylish stars such as Russell Westbrook, in football you have people that make their name off of huge plays on the field such as Odell Beckham Jr, and in baseball you have the quiet swagger of people like Jose Bautista. But when you bring up personality in golf, people seem to immediately think of John Daly’s pants. But the addition of a creative appearance in The Golf Club 2 is actually a very welcome one, as choices are aplenty for what kind of slacks you want to wear, what ridiculous patterns you prefer, or if you want to go with or without a golf club (truly a monumental choice). In the first Golf Club, your appearance choices were limited and it ended up making the game devoid of any personality. This injection of creativity is a small step, but one that is much appreciated.

Easily the largest aspect of The Golf Club’s personality was its lovable announcer. Instead of your traditional quiet, lifeless announcers, The Golf Club introduced a voice that was comedic, witty, and most importantly, helpful. In such a patient game, introducing a voice like that can be tough, but The Golf Club did it excellently by towing the line between sarcasm and actual advice. It doesn’t feel like a comedian reading from a script, it feels like an actual pal alongside  you. This voice is back in The Golf Club 2, and remains wonderful. He guides you through the tutorial, and then follows alongside you as you play created courses. That being said, he does disappear when you get into the new career mode.

This new mode is where The Golf Club 2’s over reliance on user-generated content really begins to hurt the game itself. Due to not having the PGA license, The Golf Club’s version of a career mode is based around randomly assembling user-crafted courses and running through them alongside a host of other ghosts. While playing these courses, you attempt to have a lower score than your ghost counterparts and if you do at the end, you consider that a victory. It’s a bare bones experience that is devoid of any life, outside of looking at scorecards, to keep you going from course to course. There are no fake sponsorships to acquire, no interactions with other golfers, and none of the side activities that make a career mode an enthralling experience for sports fans. There’s some potential for a well-curated playlist of courses to glide through, but calling it a “career” mode seems like an over embellishment.

The online variant of the career mode is a “Societies” option, wherein you and your friends form a club and schedule events to play together. You get your own customizable clubhouse, and earn more credits that can be used to trick it out or further customize your own golfer. If you have a few friends that want to jump into The Golf Club 2, Societies is a great feature to help you all play together and get people accustomed to the golf simulation.

On-course, things remain largely the same from the previous Golf Club game. It’s still a hyper-realistic mimic of actually going 18 holes, and by far one of the best playing golf video games in years. Conveying “feel” in the context of golf is immensely difficult, and something that the Tiger Woods games rarely achieved. The Golf Club 2 does it best by providing you all the information needed for a good opening swing or concluding putt, and then letting the player make his or her own judgments. Having to read the green and deduce where your ball will break is a perfect example of how peaceful and relaxing The Golf Club is. Going through eighteen holes is a mellow experience unrivaled by any other sports title.

As is the case with many games these days, The Golf Club 2’s servers had a pretty rough launch. As you may expect with a game so heavily reliant on user-created content, this made the game practically unplayable for a few days. That being said, as of this writing (July 2nd), things seem to be much more stable. There are still times where you will get kicked out of custom courses, but resuming your progress is easy due to the game auto-saving after every stroke. Things are still not perfect, but the steady improvement is a good sign.

The first Golf Club was a huge breath of fresh air, although one that didn’t last long due to a lack of surrounding features that you expect in sports games. It’s clear HB knew this to be an issue, and tried to rectify it with a career mode, but it mostly falls short. It’s incredibly simple and the over-reliance on user-generated content holds it back. The addition of Societies is nice, but only relevant if you have friends that also want to partake in one of the most hardcore golf sims around. All that being said, the charm of The Golf Club is still very much there. It’s one of the best feeling golf games to come out in years, arguably the best in the past decade, and simply going eighteen holes is immensely relaxing. The high quality of play buys the series more time to try and implement compelling side content.

The Golf Club 2 follows in the footsteps of its predecessor, providing an unrivaled golf simulation that still lacks surrounding content to keep it relevant for months to come. The new career mode leaves a lot to be desired, but few sports games can compete with how solid the on-course gameplay is within The Golf Club 2. Societies is also a welcome addition that golf-loving friends will really appreciate. The Golf Club 2 is still a ton of fun to play, but it's clear that HB Studios needs to revamp some of the side activities heading into The Golf Club 3.