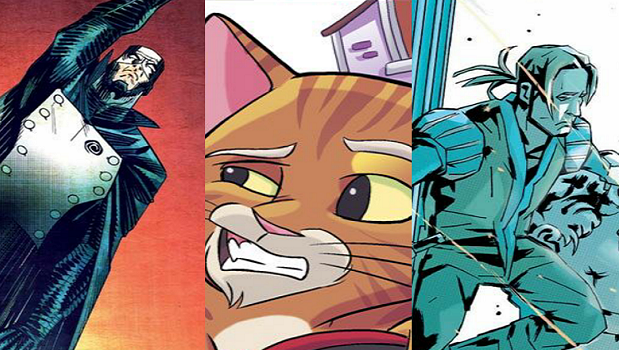 Another Wednesday, another slate of comics to check out! While this week is going to be filled with turkey, thankfulness, and maybe some shopping madness, you can be sure that there’ll be some great things to read after you’ve had your fill of delicious food. This week on Titan’s Terrific Trio, we have a new heroic debut, a collection of family friendly hijinks, and one more issue of Assassin’s Creed before the comic series’ explosive finale.

Masked #1
After a harrowing experience fighting cybernetic machines (and being rescued by a caped hero), Frank Braffort leaves his military career to settle down in Paris. Set in the near future, the people live in fear of the mysterious objects known as anomalies, robotic creatures appearing seemingly out of nowhere. In addition, a pirate network in Paris transmits news everywhere, regardless of whether civilians want to hear it or not. After a prefect is attacked by an anomaly at a defense conference, Braffort is back in action as he tries to make sense of what’s going on. While the first issue is somewhat inconsistent in its art, the storytelling is top notch and sets up the concept of what it truly means to be a hero. We’ll be seeing more of Braffort and his heroism in the upcoming months, so stay tuned for updates.

Puss in Boots: Amazing Tails
Fresh off a critically successful spin-off movie and Netflix animated series, Shrek’s favorite ferocious feline stars in a collection of colorful stories in this trade paperback. These eight stories follow the everyday adventures of Puss in Boots as he hops on a ship to escort an owl to a secret treasure, tries to capture a villain without destroying the town, and attempts to change his image for a costume party. While you’re going to get more enjoyment out of this if you’ve watched any of the Puss in Boots related media, its family friendly appeal and episodic storylines mean that it’s easy for anyone to jump in and enjoy. The strips are drawn by different artists, so the art styles are all over the place, but with a charming supporting cast and a whole lot of hilarious moments, this’ll be a great pick for the young ones as they settle down at the kids’ table.

Assassin’s Creed #13
The Assassin’s Creed comic series is reaching an explosive climax, as its penultimate issue is released today. Charlotte, the arc’s protagonist, is trying to explore her ancestor Hiram’s memories, but something troubling is affecting her experience in the Animus, causing her to experience some false memories and lapses. At the same time, the members of Erudito are stalling for time as the Templars are zeroing in on the group. Will Charlotte find out what’s going on with Hiram before she experiences some fatal consequences? And what about the mysterious Consus, who she bumps into yet again? This issue ramps up the emotional tension, with the cliffhanger ending the issue on a very high and suspenseful note. We’ll have to wait until next month for the conclusion of this arc (and series), but fans of the games will not want to miss this issue.

Are there any comics you can’t wait to read this week? Post your comments below!