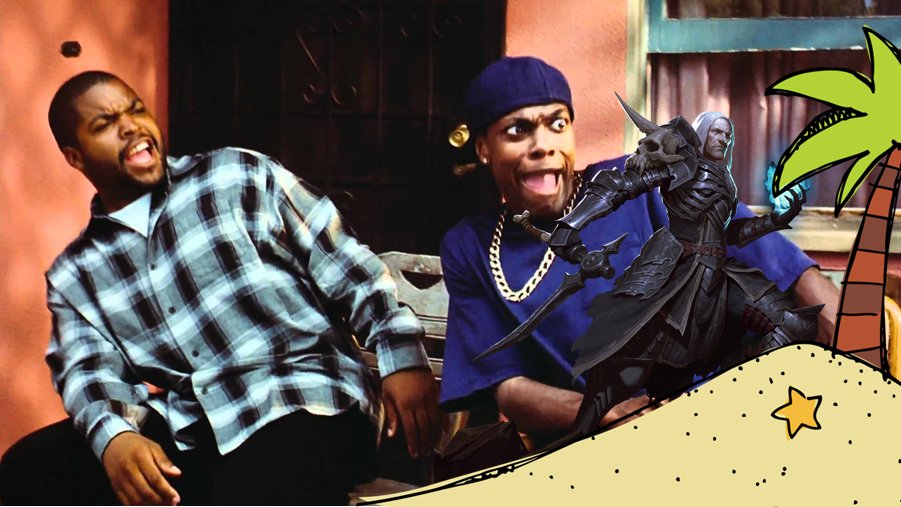 The week is almost over. Many of us have toiled away at our jobs for five whole days. We fought and clawed our ways out of the pits of the week, all so that we could reach this glorious day. Friday! And with that comes the glorious prospect of playing video games.

The origins of the word, Friday, stem from Frige, the Germanic goddess of married love. This obviously means that we are meant to love our video games with the same passion, strength and intensity we love our husbands and wives. So move aside, spouses! Make way for our one, true love. Video games!

Josh Devlin – Editor and King of the Rush Frontiers

A mobile game? Yeah, and an older one at that. The tower defense genre is my kryptonite. Somehow I let this gem slip passed me when it released, so I’m playing a little catch up while the summer games drought is in effect. There are many hours of RPGs and multiplayer shooters for me to play, but the Kingdom needs my help. I cannot abandon the frontier in its hour of need. Oh, I should’ve mentioned, I’m playing Kingdom Rush: Frontiers. I got a little carried away there.

I’ve found myself immersed in, of all things, Final Fantasy XII. The Remastered edition is truly an underrated gem, and the improvements across the board compelled me to complete it again. It’s every bit as rewarding, if not more so, than the first time. How many times can you say that about a game?

Between bouts of Final Fantasy hunts, I’m also enjoying couch co-op time with the missus as we play through the Rise of the Necromancer addon for Diablo III. Yea, it’s got some balance wobbles, but making corpses explode en mass never gets old.

Lastly, there’s always time for VR. I have been enjoying HTC’s own arcade/realism shooter Front Defense. It’s pretty difficult, but does killing Nazis ever get old? Besides, it gets me off my lazy ass for a bit.

Between wrapping up E3 and covering Anime Expo, I’ve found myself with very little time for games these past few weeks. I’m still spending every spare moment playing Ever Oasis, which has been surprisingly deep, challenging, and a much better game than I would have dared hope. I’ll have a review up shortly–stay tuned!

I got to play an early version of the Kickstarter backers demo for Indivisible, which is, to date, the first platformer which I haven’t categorically sucked at. I’ll have a write up about that coming soon, also… again, stay tuned! While I haven’t gotten to play it, I spent spare time last week watching kickoff streams for the indie Kickstarter game, Beans. It looks wickedly funny and a part of me can’t wait for con season to be over so I can build my own coffee empire.

Finally, I’ve got to play a few minutes of the early access of GORN! This gladiator fighting game is crazy fun, from the way the enemies walk on their tiny legs to the pinata mode, where bashing them up causes them to spew candy instead of blood. Can’t wait to bash up some more rivals!

Kirby’s Blowout Blast has hit the eShop and as an avid Kirby fan, I’m excited to try it out. I’ve already started playing with it and I can’t wait to attempt to get platinum medals on everything. Unfortunately, this game seems very short.
I’m also having a get together with some friends around a bonfire. A several year long tradition, we are going to break out Ultimate Werewolf.

This is the perfect game for a bonfire, as long as you place your cards in a safe place. Ultimate Werewolf is a card game run by a moderator where each player is given a role ranging from villagers to werewolves. During the night, the werewolves pick a villager to kill (all of the other players have their eyes shut) while during the day, the villagers have to work together to figure out who is a werewolf, ultimately putting someone on trial and killing them before the day ends. This game never fails to bring hilarious stories to the group.

I once convinced the entire group to lynch my dad because I thought he was the werewolf. He wasn’t. I don’t think he forgave me for a little while.

So while we’re waiting for Splatoon 2 soon, we’ve still got a bunch of indie titles that are coming out now on the Switch (four yesterday, to be exact). I personally picked up Shephy and Implosion (both ports from mobile devices), but I’m liking what I’m seeing with the former. Shephy is kind of like Pocket Card Jockey mixed with Dante’s Inferno (the story, not the game), and it’s something that I can pick up and play for a few minutes at a time while waiting for a bus.

Haven’t played Implosion yet, but from the looks of it, it’ll scratch my itch for a hack-and-slash until Koei-Tecmo decides to release a Warriors game on the Switch (FE Warriors notwithstanding). Death Squared (which will be out this Thursday) is also a pretty sadistic party game (since you’re basically crazy if you think you’ll grab three friends and escape with your friendship intact). HIlarious Portal-like commentary in the story mode, and the two-player co-op mode works very well with the Switch’s portability.

What are you playing this weekend? Let us know in the comments.