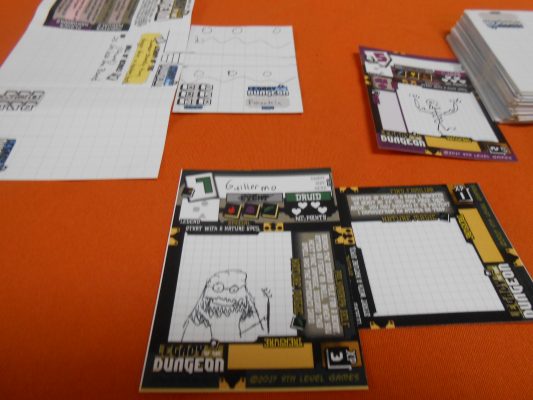 Tabletop Day is something that couldn’t have existed even a few years ago. The recent burst of excitement and energy for nerdy pursuits has been emboldening, and I was especially happy to see how vibrant my local design community is. Philadelphia’s own Redcap’s Corner, which is both a board game store and de facto community center, invited designers out to showcase their material. Whether successful designers or newcomers, they had space to share their visions with players and meet other designers to bolster their skills. Some will soon be for sale, some are in early concept stages, but all of them were a blast to get my hands on. For the sake of space, I will only be discussing one game from each designer, but I encourage you to check all of them out and learn about each of their amazing projects.

Room and Board Games
Ursa Miner: The title alone should be enough to get you laughing at the designers’ cleverness. In Ursa Miner, you are none other than bear miners in Mount Honeycomb, sent to bring its golden contents back to your caves for consumption. The game plays out on an appropriately hex based grid, moving and mining to explore the mountain and expose the more valuable materials buried underneath the surface. Along the way you will have to manage your resources and your teams of bears, while using special movement cards to manipulate the field (and your opponents). The victor is the one who can uncover the most Royal Jelly before the cards are depleted. I had an absolute blast playing, and anyone curious can check it out May 9th, when it goes live on Kickstarter.

9th Level Games
Legacy of the Dungeon: The creators of the legendarily hilarious Kobolds Ate My Baby had a lot on display, including Hot 16, a game about Rap in the 90s that comes in a cassette box, and Knuckle Sammich, in which kobolds have to fill their stomachs before the return of their king heralds the end of lunch. I got to sit down with Legacy of the Dungeon, a legacy game in which players modify cards as they explore the dungeon’s rooms. Cards are multipurpose depending on when you draw them, and for the same card you could be drawing a dungeon room, making a monster, or inventing treasures. There are spells, level up mechanics, and helpful equipment, but all of them feed into this theme. The game is very early in development, but I will be keeping an eye on it.

My first creation was Guillermo Del Toro as a Druid

Nicholas Richards and Willie Pogue
Made From Scratch: This strategy game is won by whoever can create the best gourmet meal. You and your opponents will be struggling to get the best ingredients on recipe cards so that you can prepare and cook them yourselves. A careful cook can make substitutions and take shortcuts, but you have to be careful to manage your meals or they will spoil. Each recipe card, which explains the ingredient cards necessary to cook them, is portrayed with a meal homecooked by the designers themselves, and their skills are impressive. Made From Scratch is projected to be on Kickstarter, likely before the end of 2017.

Bearicade
Set a Watch: Every game of D&D ever played has players settling down for the night and deciding their order of watches around the fire. In Set a Watch, that night is when the monsters come in force. The firelight is the only thing keeping them away, and you have to protect it with your lives. The monsters come at you in a line, and your heroes’ abilities do more than attack: managing the order of monsters is crucial. At the start only those closest to the light are revealed, and attacks are based on their order in the line. You also have to manage your abilities, which can exhaust over time. You need to give a hero a rest for the abilities to refresh, and choose who you can afford to go without for a round. Set a Watch will be ready for Kickstarter soon, so keep a close eye if you are interested.

Rock Manor Games
Maximum Apocalypse: Successfully funded on Kickstarter, Maximum Apocalypse takes place over a number of apocalyptic scenarios. You and your survivors will use special character decks to explore the world left behind, managing their starvation and radiation levels. You must be careful, however. In the scenario I saw, radiation was sweeping through the city, making areas uninhabitable. Time, the environment, and the denizens of this new world are against you. It shows great promise for its release later this year.

SilverClutch Games
Overworld RPG: After successfully funding Beneath Nexus, SilverClutch is moving on to RPG development, with an all new model of distribution. Projected to be 100% free, Overworld will be supported by Patreon and release supplements to its system periodically. The system itself is built to get you into the game quickly while offering room for growth into any genre. Characters have attributes, traits, and skills which all have a mechanical back-bone but are freeform enough to be usable in whatever setting you require. The system has been in development for nearly two years but playtesting for around 8 months. The Patreon is brand new, so check it out for more information or material on the design.

Cardboard Fortress Games
Lazer Ryderz: Cardboard fortress has a refreshing variety in its catalogue. Enemy of the State has members of 1984-esque government agencies trying to ferret out traitors. Kobolds sets you as heroes trying to manage the oncoming monstrous hordes as they inch closer to your town. Moqsuito Meltdown is a dexterity game where you throw cards down to gain points with mosquitoes, slap with hands, and skewer with your final card: the knife (just be careful not to stab yourself). I got to sit down with Lazer Ryderz, a racing game set in the neon arcade age of the 80s.

Using movement mechanics similar to X-wing, in which you lay out tiles to denote how far and what direction you travel, you will be picking up energy for victory points. But be careful: the tracks you leave behind remain as obstacles, and crashes will set you back far. The flavor is bright and the mechanics very tight. Lazer Ryders was successfully funded on Kickstarter and is projected to see release August of 2017.

Student Projects
I was pleased to see several students from Drexel University’s Game design program. I was pleasantly surprised to find that Drexel had a game design program. The following games are early in development, but even so both prototypes were functional and thought out.

Over the Bridge (working title): Over the Bridge is a card-based fantasy journey. You and your companions will be journeying across the land surviving encounters and gaining abilities and equipment. The way will be fraught with peril, but you will be doing more than fighting monsters. There will be story points and other characters that you will meet, making decisions as you progress towards your destination.

Henshin Heroes: Monsters have come to your city, and only these color themed warriors and their giant robot can save it. You will have to work together to protect the city, find off the monstrous horde, and gather energy to power your mighty robot. You also have to manage whether you will transform into your more powerful suit, which makes you better able to fight but attracts dangerous beasts to your location. Key centers of the city need to be protected as well, so you will be managing actions and your location to keep your home safe…if you can manage it.