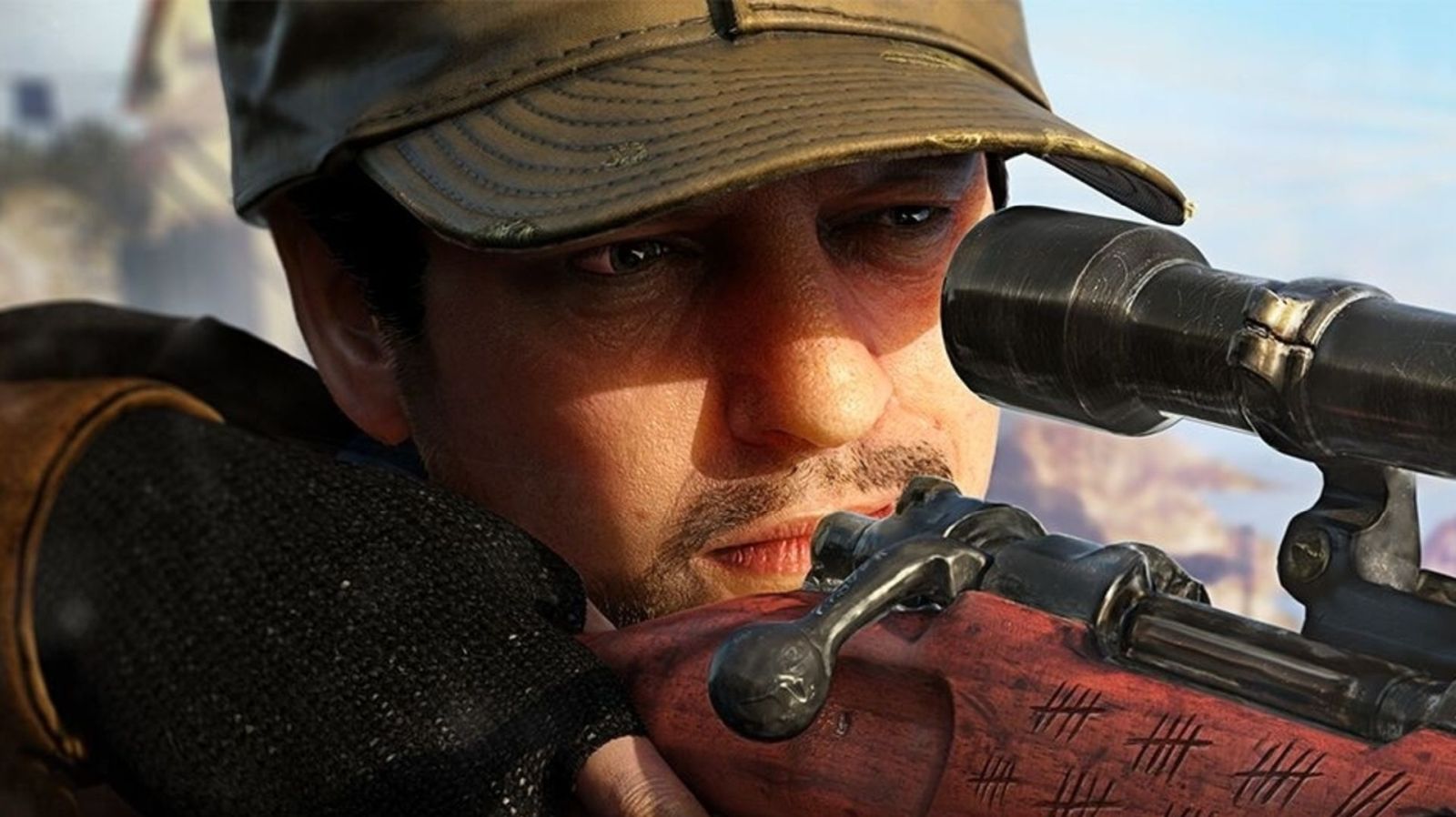 If there are games uniquely suited to VR, it’s games with sniping sections. Developer Coatsink (Jurassic World Aftermath, Onward, and the upcoming game Replaced), Just Add Water (several Oddworld titles, I Am Bread, Lumo, etc.) and Rebellion (Strange Brigade, Evil Genius, and the Sniper Elite series, of course) teamed up to bring the wildly successful series Sniper Elite to life in virtual reality. Taking place in Italy in 1943, the game focuses on a member of the Italian Resistance as they defend their homeland from Nazi invaders. To quote Inglourious Basterds “”We’re going to be doing one thing and one thing only. Killing Nazis” so let’s get to it.

First up are the comfort presets. A bundle of several of the eight comfort options, there are presets for “Max comfort”, “Moderate”, and “Intense”. There is also an advanced option that lets you poke at all of these options individually.

Next up it’s time to set your movement mode. You can point and warp, or you can use free movement. More than half a dozen comfort options including vignette and both snap and natural motion choices available to help you stave off nausea, but I’m surprised to say that I really didn’t need them. I suffer from VR nausea with any game that’s not very well optimized, so it’s great when a developer really puts in the effort to avoid that. The snap motion is frankly horrible, with a low-framerate jerky turn, but turning it off completely solved the problem. It’s odd to say, but stick with natural motion — even if it’s not normally something you can do.

The next thing you’ll select is your grip type, of which there are three. The first is a Toggle Grip that asks you to tap to grab and then tap to release. Active Grip allows you to simply grab the object, and then when you release the button it’ll throw. Mixed Grip is, as the name suggests, has you doing a bit of both. You’ll hold onto a firearm by tapping the grip, whereas grenades and the odd thrown hammer are released when you release the grip. It’s a good mix. You are also able to simply grab an object, use an arc indicator, and just release the trigger to auto-throw it. Whatever floats your U-boat.

The final selection is the kill camera. A staple of the series, occasionally the game will showcase precisely where your bullet struck, and exactly how much brutal damage it inflicted. There are three options ranging from turning it off entirely, no bullet travel (meaning it doesn’t zoom from your position) merely showing the results, and the whole enchilada. This setting shows the bullet exit your rifle, the travel of the round as it finds its target, and then the brutal dismemberment it unleashes.

The game features three difficulty settings — “Cadet” which reduces damage and simplifies the ballistics, “Marksman” which makes enemies a bit more threatening, uses advanced ballistics, and shows a bullet drop indicator, and “Authentic”. Authentic maximizes the threat level, introduces full ballistic modeling, and turns off the bullet drop indicator for the most immersive action. Without further ado, let’s get to it.

The game begins with the protagonist reminiscing as he watches his family frolic and play at a family picnic. Looking at his old and wrinkled hands, he’s reminded of his time as a soldier 40 years prior, and the horrifying scenarios he faced during the war.

Playing the other Sniper titles from publisher Rebellion, there’s a key to take a respiratory pause before taking your shot. Holding your breath with that shift key to line up a longer shot is your path to accuracy, but in VR it’s a completely different experience. Lining up a shot in VR is more accurate to using a real rifle because…

Sniping is all about patience. Slowly stalking your foe, setting up your final firing position, and…waiting. Lots and lots of waiting. Well, that’d make for an extraordinarily dull game, so stealth in Sniper Elite VR is often short lived, and entirely optional. One example is infiltrating a warehouse where you’ll encounter a locked door. You’ll need to recover the key for the door to reach your perch to stop a tank convoy. The game gives you a Welrod, one of the first single-shot suppressed pistols, and guides you towards a rooftop to infiltrate the warehouse. Taking out the one guard, you are now free to head into the warehouse and take them out close up, or use the exposed skylight. Here’s where the wheels fell off.

Entirely too many games have AI that are either omnipotent or dumb as a post. In VR I seem to run into a blend of both. On the rooftop and using the Welrod, I popped one foe in the head. The game informed me that the enemies were investigating as they found a body. One guy wandered up and looked around for about 10 seconds before deciding that the guy with a hole in his skull must have been killed by old age or something. I popped him, repeating this same sequence to dispatch a dozen Nazis, stacking them like firewood. Walking down the stairs and crossing the warehouse unmolested, I opened the last office. Inside I saw a foe facing away from the door that just swung open and he…did nothing. I shot him in the head and peeked around the corner. The shot startled the Nazi officer, but not enough to make him face the door or the direction of the shot. He got a lead injection for his inattention. The AI in Sniper Elite VR swings from wildly inattentive to completely laser focused on your location. Enemies have a slow detection rate where their “awareness meter” fills up over time, but they are also cool with dead bodies on the ground after just a few moments. Insert that “Oh no! Anyway…” meme here.

Back behind the scope, the game keeps things fresh across the 18 levels of the game. Each of the set pieces take between 15 and 40 minutes to complete, meaning you’ll get more legs out of this game than most VR titles. The developers provide little things to shake things up, such as a mission near a factory. The noise generated by the factory crescendos occasionally, allowing you to mask your shots. There are often red-marked explosives and weak points that can turn the tide of a fight, changing the whole pace of a mission. Additionally, there is always a plethora of various weapons to choose from, giving you quite a few options to play or replay missions. There are also stars to be earned for speed running a mission, getting a few kills with a specific weapon, or remaining in stealth to tempt you to try these missions once again.

One of my favorite parts of this game is that each weapon is accurately modeled after their World War II counterparts. The shotgun is loaded one shell at a time, delivering a spine-straightening sound as you rack that first shell into the chamber. All of the rifles require you lock the bolt into the vertical position, then pull it back to release the spent cartridge. Sliding the bolt forward pulls the next round into the chamber, and pulling it down locks into place, readying the weapon to fire. Pistol magazines must be ejected when empty, grabbing a new one from your belt holster to slide it into place. Grabbing the rear of the pistol slide and pulling slightly back then releasing it causes the slide to snap into place, pulling the first round into the chamber. Even a Panzerfaust (a single shot anti-tank round) requires that you pull up the sighting arm and gripping it with both hands before unleashing it. The team spent a great deal of time on each weapon, modeling their behavior. But nothing beats the scope.

Lining up your shot in a scope requires precisely the correct positioning, and that’s modeled perfectly here. Holding a rifle with both hands you’ll have to position your eye precisely to get a clear sight picture. If you don’t, your aperture will be very small and unclear. Getting your eye in the right spot lets that aperture open completely, letting you line up your shot. Combined with the breathing I mentioned earlier, it makes Sniper Elite VR the best VR sniping game out there. Yeah, it’s a bit of “Turkey Necking” (moving your head to get the sight lined up rather than adjusting the butt stock or changing the scope eye relief), but it works perfectly here.

There is one hitch, and I think it has more to do with tracking or an unseen gameplay assistant. Occasionally while lining up a shot, the game seems to “help” by holding that sight picture unless you move your hands or face too much. Occasionally that’ll cause the rifle to “stick” to cover you are using, making the rifle hold onto a sandbag way too long. This can cause you to miss a lined up shot as you find yourself suddenly looking at the sky. It doesn’t happen frequently, but if there is an option, I’d like to turn it off please.

I came away from Sniper Elite VR impressed with how translating the arcade-esque sniping aspects of its predecessors into something requiring calm and discipline. It changes the game from something that feels like it’s being viewed in a disconnected fashion through a window and turns it into something where you can literally “see the whites of their eyes”. It adds an air of authenticity without translating into something that requires real-world range time.

Sniper Elite VR is an absolutely fantastic transformation of the flat-screen game, trimming the fat to just the parts that’ll be fun in virtual reality. Translating the sniper rifle into a VR medium makes the game immersive in a way we’ve not seen capitalized in many games to date. This one should be in your library, if you can handle the gore, and the occasional braindead AI.

Ron Burke is the Editor in Chief for Gaming Trend. Currently living in Fort Worth, Texas, Ron is an old-school gamer who enjoys CRPGs, action/adventure, platformers, music games, and has recently gotten into tabletop gaming. Ron is also a fourth degree black belt, with a Master's rank in Matsumura Seito Shōrin-ryū, Moo Duk Kwan Tang Soo Do, Universal Tang Soo Do Alliance, and International Tang Soo Do Federation. He also holds ranks in several other styles in his search to be a well-rounded fighter. Ron has been married to Gaming Trend Editor, Laura Burke, for 21 years. They have three dogs - Pazuzu (Irish Terrier), Atë, and Calliope (both Australian Kelpie/Pit Bull mixes).
Related Articles: Sniper Elite VR, VR
Share
Tweet
Share
Submit