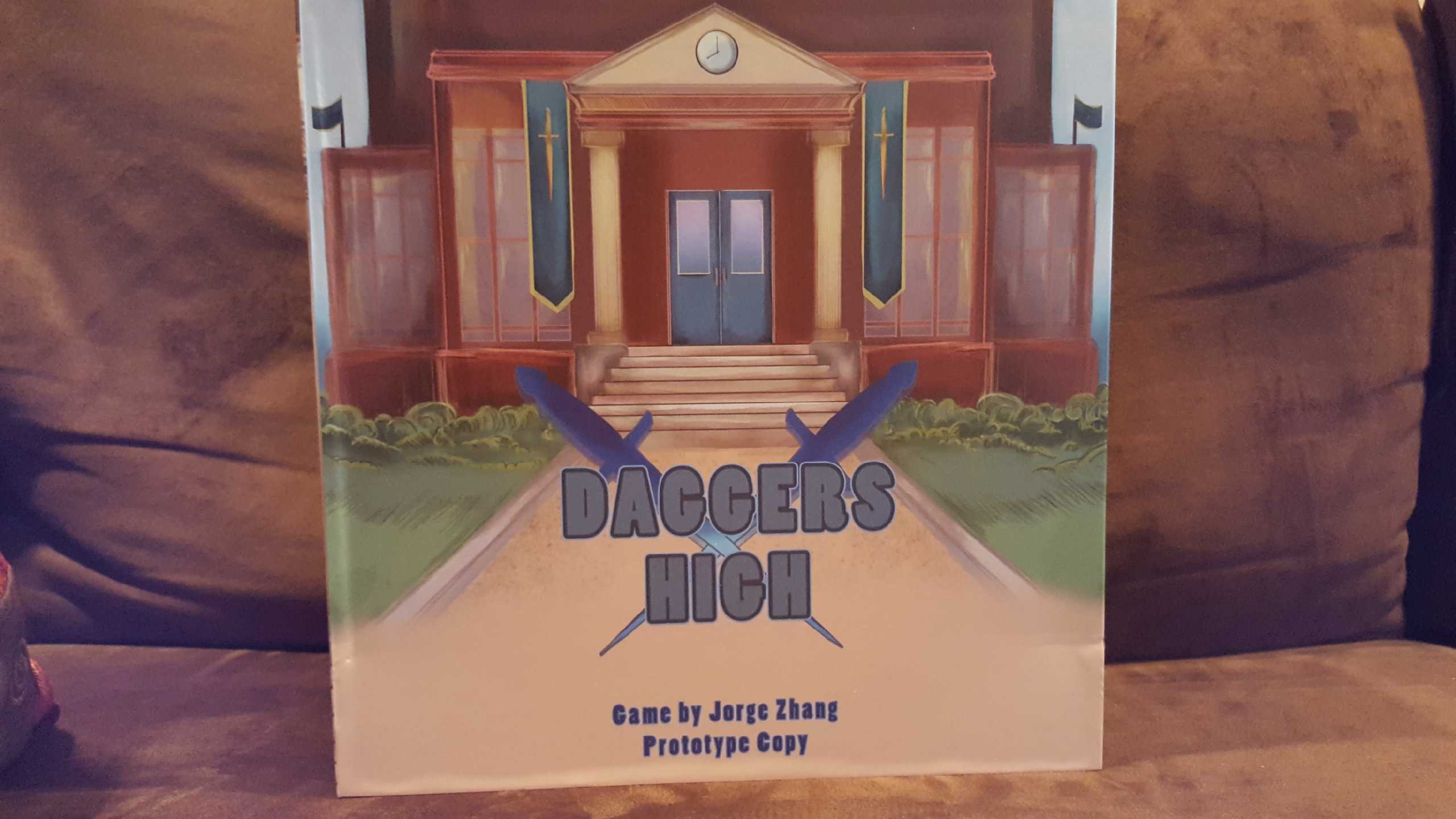 High school is a host of experiences, ranging from classes to clubs to making friends and much more. What if you could take all of that and put it into a game? Daggers High is part card game, part board game, and allows you to delve back into the old high school days. Can you make it through all four years and come out a success?

Daggers High is a two to four player game where the goal is to end your high school career with the most resume points. Resume points are earned through many actions such as getting A’s in classes, joining clubs, and getting teacher recommendations. Unlike actual high school, you’ll be competing against your fellow “students” to be the best. Sometimes this means just making better choices than them, other times it means you’ll take the time to hinder them.

When setting up the game, each player will choose a student board and a color. Each student board has two sides: one is generic while the other has a student with special abilities. The generic side is meant for vanilla games, and the special side is for players who want to make things more challenging. First time players should definitely start with the generic side, as it gives you a better chance to acclimate yourself to the rules and flow of the game. It doesn’t take long to get the hang of things, but starting simple will help by leaps and bounds. The color is purely for what set of sliders and action cubes each player will be using. To set up their student board, each player puts a slider on the 10 for happiness, one on the 10 for integrity, and one on the 0 for stress. They’ll also put a grade token on each of the four classes with the F facing up; every class starts with a failing grade, unfortunately. The next step is separating all of the different cards into their own piles (Freshman, Sophomore, Junior, Senior, Club, Essay, and Influence). Each player also gets two essay cards that they keep face down. Finally, set the teacher board off to the side of the decks. 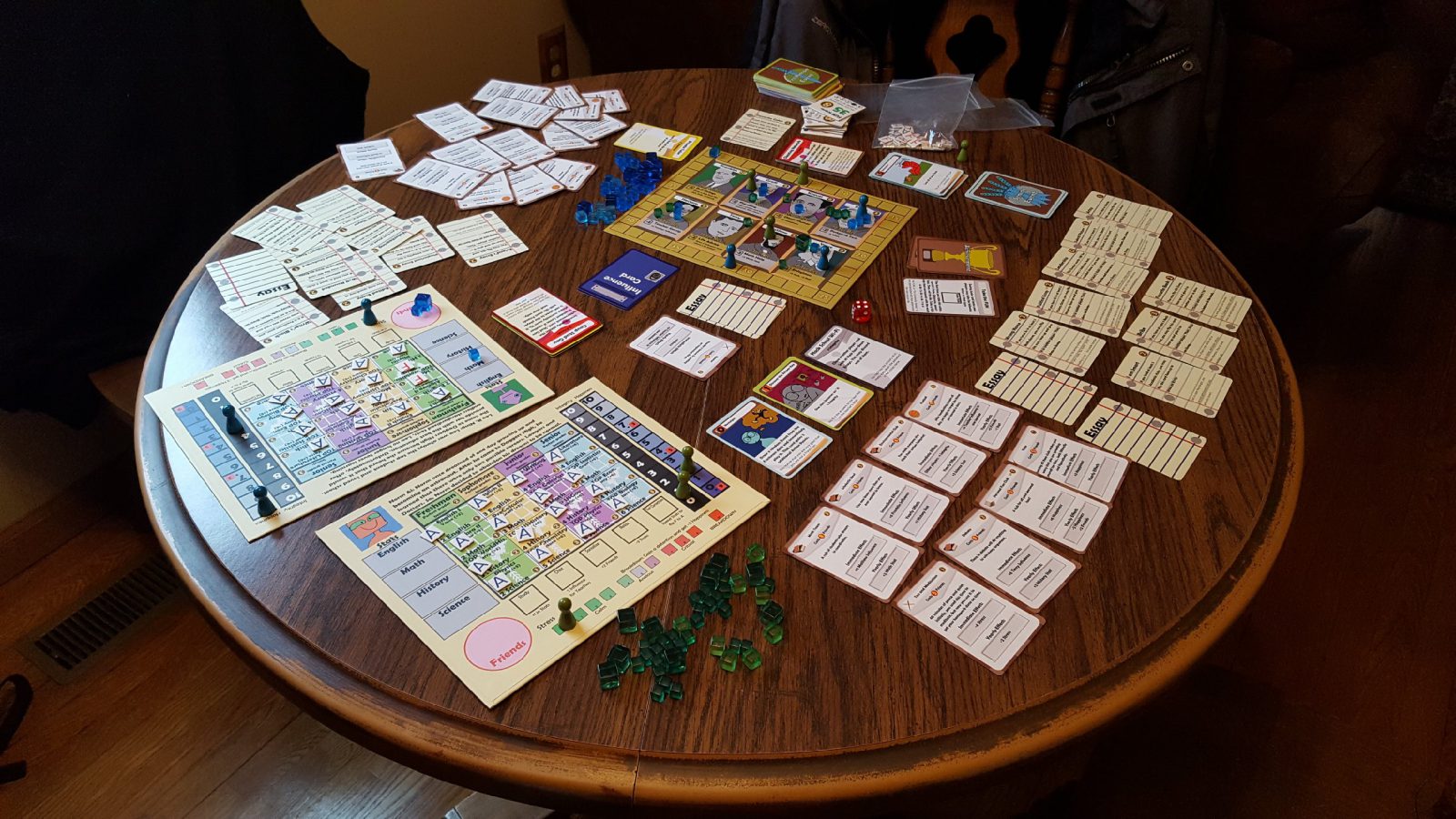 Now, the way the game starts depends on the number of players. If there’s three or four players, everyone is dealt four freshman cards. Each player chooses one of the cards to keep and then passes the rest to the player on their left. This cycle continues until everyone has chosen four cards to keep. In the event of a two player game, both players are dealt six cards and they both choose four of them to keep. There’s no need to swap hands with only two people playing. When the sophomore, junior, and senior years start, the same steps are taken, except with the corresponding year cards.

On a player’s turn, they choose one of their cards to play. After playing it, its effect occurs, and they obtain action cubes equal to the number in the orange cube in the corner. These action cubes can be used for actions such as increasing stats, chatting with teachers, socializing, relaxing, and correcting tests. You can spend your action cubes on as many of those actions as you want as long as you have enough cubes. You only need one cube per action, which is pretty nice. By increasing stats, you can place cubes in the writing, math, history, and science sections. These stats are used to help correct tests; in order to correct tests, you need a number of cubes in the subject you want to correct that equals the number in the bottom left corner of that year. For example, if the freshman writing class has a three in the bottom left corner, you need three action cubes in the writing section to get an A. Besides that, you must spend one action cube in the test correction spot to actually perform the action. Doing so lets you flip the F token into an A. Earning an A gives you the bonus labeled on that space, which typically involves earning resume points and some teacher influence. We’ll get more into those aspects in a moment.

Chatting with teachers lets you place two action cubes on a teacher of your choice; this represents teacher influence. Each teacher has their own ability that can be activated by spending a designated amount of influence that you’ve gathered on them. The effects are vastly different and can be immensely helpful. For example, Yasse spends three influence in order to let you add three stats to a subject, but then remove two stats from another. Matthew spends three influence to give you two action cubes towards your math stats. In addition to their effects, the other thing I enjoy about the teachers is their names. They’re all a play on words for their jobs. We have Matthew the math teacher or Fizzix the science teacher for example. 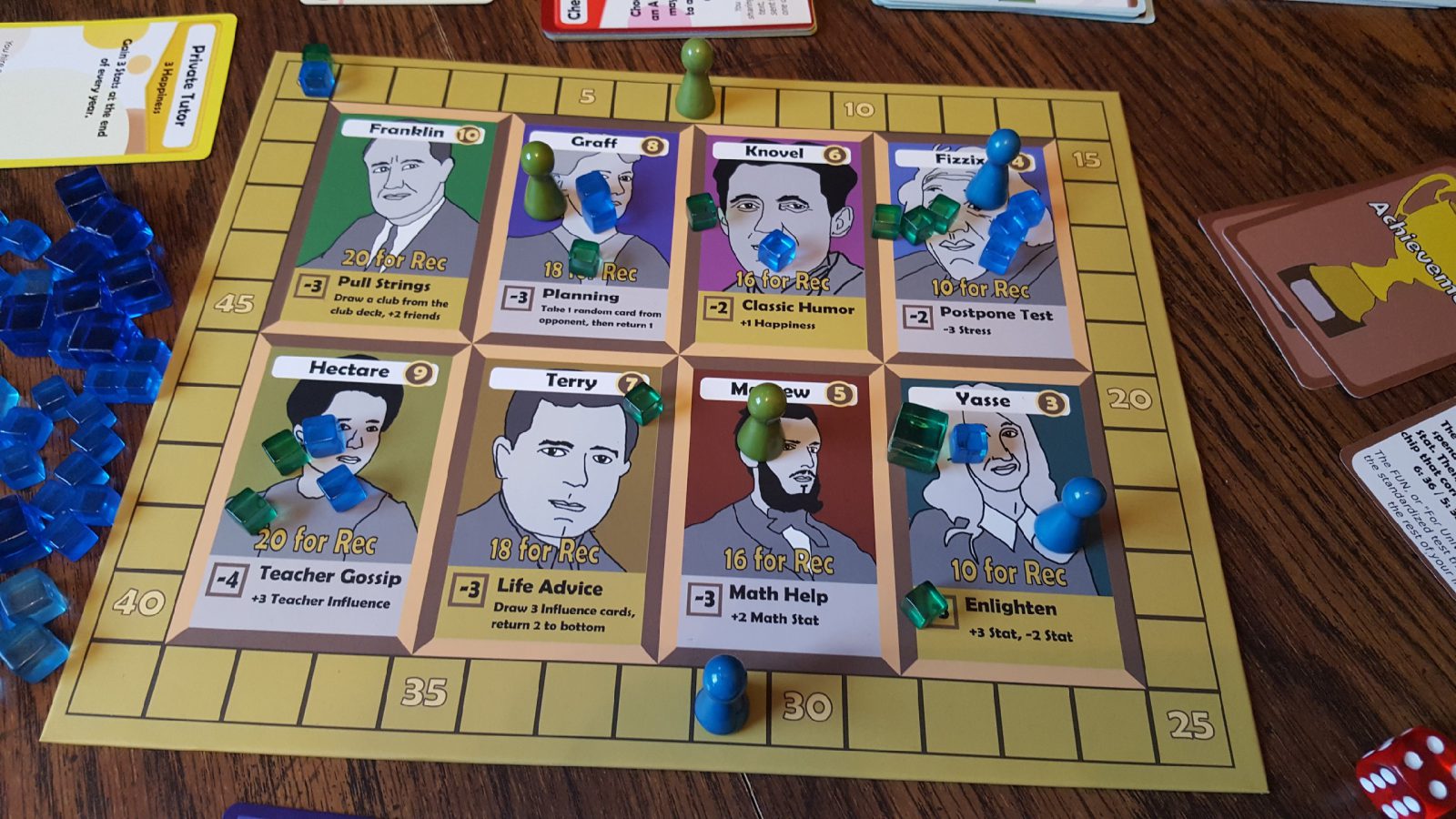 Socializing allows the player to spend one action cube to make two friends. Friends are useful for buying clubs and some influence cards. Clubs are helpful because they have immediate effects that can be anything from adding stats to improving happiness and more. In addition, they also net you resume points based on the number in the top right corner, and also have yearly effects. Yearly effects don’t occur until the end of each year, which is pretty neat actually. It’s almost representative of how a club or clubs have impacted you throughout a school year. Influence cards also may cost friends, but they could cost happiness or integrity instead. These cards either benefit the player using them or let them hinder another player. These cards can be costly to use, but the effects may end up being worth it. The last action is relaxing, which lets the player remove three stress. If a player hits 10 stress, they lose three happiness and get a detention. In order to get out of detention, that player must discard an event card.

Essays are an interesting aspect of the game, as they may or may not get used during the game. Each essay has conditions that must be met before they can be activated. Once they’ve been met, you can flip that essay card and do what it says. Some even let you draw a new essay card to replace them. As with many other parts of the game, essays also reward the player with resume points.

Now, back to the flow of the turns. As previously stated, each player plays one of their action cards for freshman year and then takes actions as stated above. Every player repeats this until everyone has used all four cards they started with. This cycle repeats for the sophomore, junior, and senior years, but each year has its own deck with its own set of cards. They get really fascinating as you progress through the years, and I was excited to discover more and more of the cards. 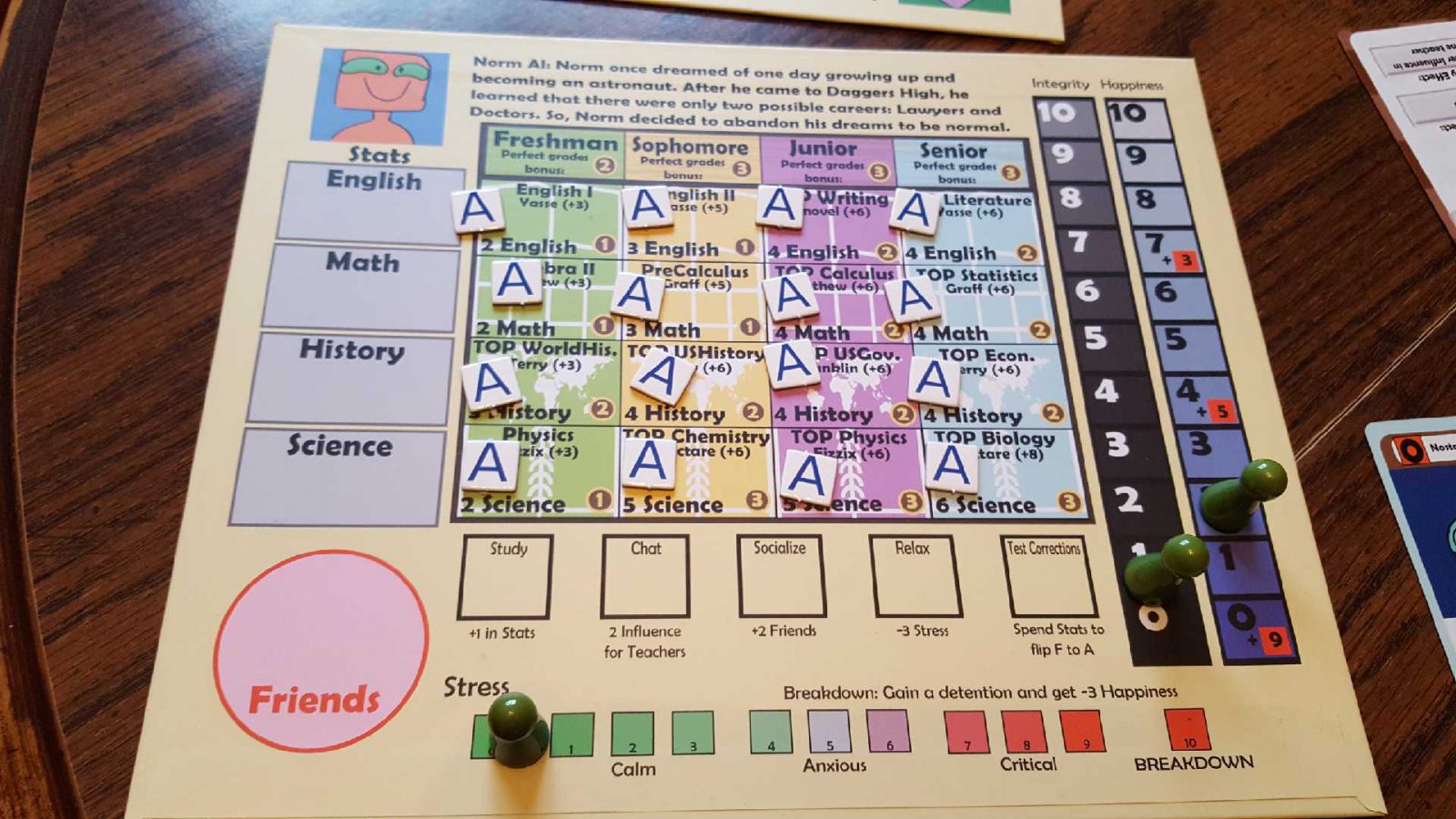 After reading all of that, it may sound like the gameplay gets pretty complicated, but in fact, it’s fairly simple. It didn’t take long for my friend and I to have a complete understanding of how the game played. It’s extremely intuitive, and I felt encouraged to keep going. There are a lot of actions that can be done, which is pretty freeing. As for the art styles and set pieces, they’re wonderful. Sure, the designs and illustrations are simple, but that’s what makes them so charming. The entire game evokes high school nostalgia and mixes that with some pretty clever humor. Every card has one or more comments on them that are designed to make you laugh. Honestly, they made me chuckle more than I expected. The student boards all have character names and descriptions that are funny, albeit them being slightly generic. For example, we have Stan Dard, Lea R. Ning, Norm Al, and Pri Son.

I never thought I’d want to relive my high school days in any form, but Daggers High has proved me wrong. The easy to learn gameplay, the quirky characters, the plentiful actions, and the strategic planning are mesh together to create a fantastic tabletop experience. The charming, light-hearted tone of the game is appealing enough to keep you coming back for multiple gaming sessions. All in all, even with the relatively simplistic design, I’d say Daggers High is easily worth playing. For those wanting to take a trip down memory lane with their tabletop games, Daggers High gets a passing grade. Unfortunately, you’ll have to wait until May for the wide release on Kickstarter, but it’s definitely worth the wait. As a final note, I’d like to mention that my copy of the game was a prototype version; there may be some aesthetic or slight gameplay changes before the final release.

Daggers High is an enjoyable tabletop that evokes feelings of high school nostalgia. The plentiful actions and tactical gameplay are engaging. The charming design and nature of the set pieces will put a smile on your face.

Codi loves to play video games and watch movies. He will watch almost any kind of movie just to experience them. His ideas take inspiration from the shows and movies he watches, and games he plays. He also loves a good pun.
Related Articles: Daggers High, Tabletop
Share
Tweet
Share
Submit