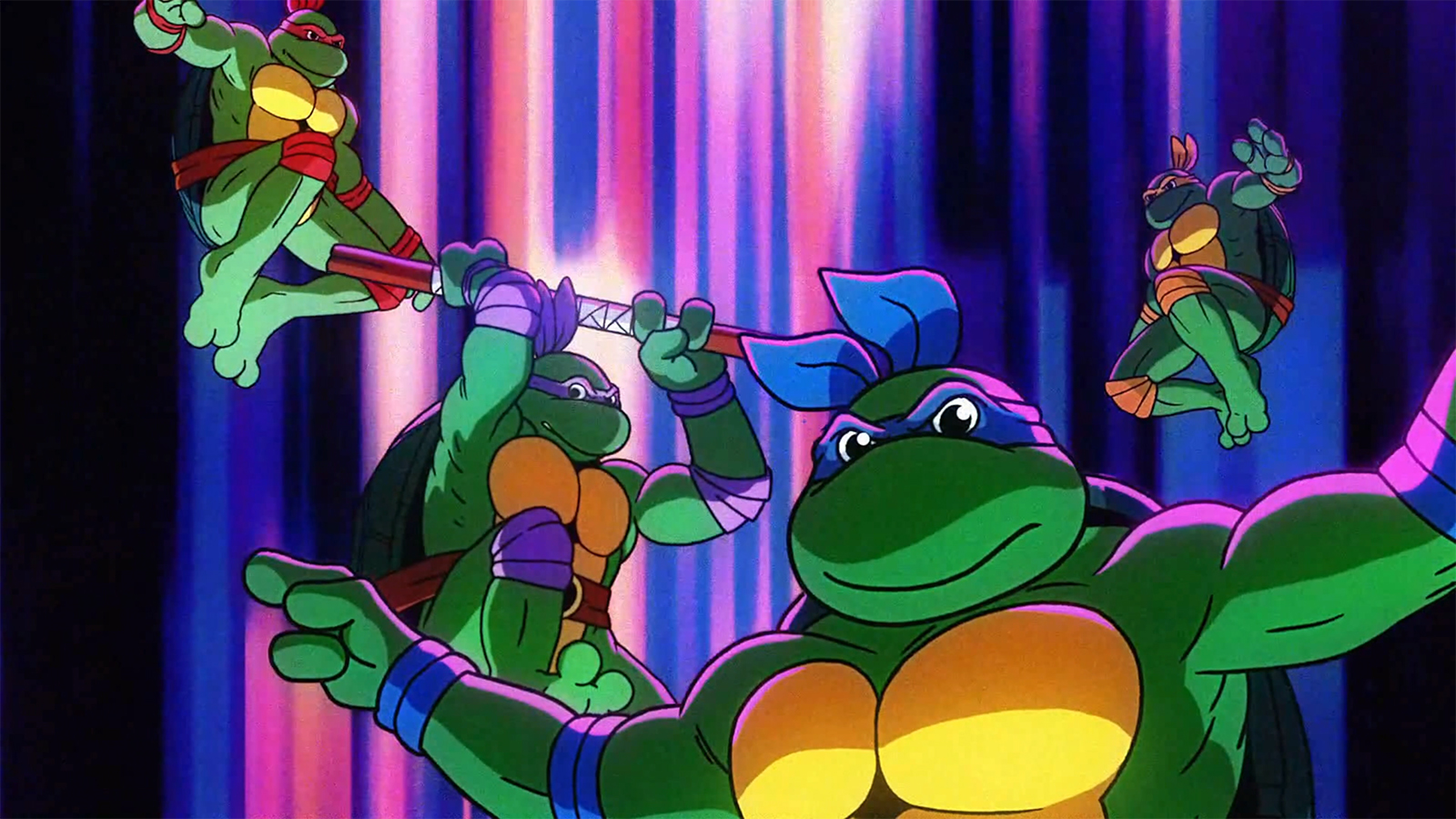 If Teenage Mutant Ninja Turtles: Shredder’s Revenge is meant to mix old arcade games with modern cartoon iterations, then I’m too disconnected from the modern cartoon elements to notice them. And I’m not satisfied with the arcade game references. Shredder’s Revenge is a competent, addicting beat ‘em up that’s meant to pay respect to Ninja Turtles’ beat ’em up past, with fighting concepts innovated by Streets of Rage 4. But it relies on its reference material to the point it feels like I’ve played this before. Its creativity is substituted for following a template that only reminded me of the past instead of creating an appreciation for how the past influenced what we have now.

In each episode, beautifully drawn art displays the story in one frame, members of the Foot soldiers appear from different places throughout each level, and bosses and characters exchange garbled digitized voice lines when they meet. After they’re defeated, a short in-game “cutscene” occurs that moved me to the next level. I think to myself “I remember the arcade games doing these things. That was cool.” But it’s so familiar that it’s predictable. Part of the charm of the arcade games was the surprises – enemies bursting from billboards on the wall, jumping out of windows, etc. Because Tribute Games rigidly sticks to the formula, I saw what would happen before it happened, which ruined the surprise. I remember walking on a rooftop. I came across four enemies attempting to surround me, and there was a giant billboard. Sure enough, two more enemies knocked the billboard down, hoping to squash me. Very predictable. Shredder still wants to dine on turtle soup. Someone turned the lights out after falling down a manhole. I get it. It’s meant to mimic the old games. But the sacrifice of making it feel old is that it hardly feels new.

Its predictability isn’t helped when blaring warning cues flash on screen to make the design feel fairer. Yet other times enemies charged on screen with no warning. What makes the bikers warrant an alarm while the single triceratops charging from off screen doesn’t? It’s not that either solution is bad, but if the result is that I’m going to take damage if I get hit by it, then off screen surprises should be consistent. The inconsistency builds frustration.

What Shredder’s Revenge does commit to is combat. It’s fast, and it’s exciting. Punching enemies after they’re dead is addicting. I love using April and combining my dash attack into her rolling jump kick, for example. The way enemies bounce off the ground and the sides of the screen invite me to keep bashing them and increase my combo counter. But there are very annoying quirks, and the most annoying is the input-perfect counters enemies have. We know the arcade games had moments where you attack and the enemy responds perfectly. Fighting Krang and his ridiculous spartan kick is a great example in Ninja Turtles II: The Arcade Game. Shredder’s Revenge continues this design, and it’s the most frustrating when trying to complete challenges that come with each level, especially finishing a level without getting hit. When I knock an enemy down, most times I can attack them as they get up. But sometimes, when they get up, no matter what I do, they’re going to punch, and once the code decides they’re going to punch, they’re invincible. My attacks swing through their bodies, and I take damage. The obvious solution is don’t attack enemies when they get up. That’s a good option, but if the attack works most of the time and then doesn’t anymore, that’s not enjoyable. It hurts speedruns – each level records how fast you beat it – and it makes no-hit runs unnecessarily more difficult.

Each character has a combat style that’s measured by speed, range, and power, plus their attack animations. Some characters share similar attacks but the three traits change how each character feels to the point that I have to modify how I play with individual characters. Some characters excel at different things, too. Leonardo’s super jump attack is excellent at hitting multiple people simultaneously, while Donatello’s range helps keep enemies away, even though he’s much slower. Activating supers is very effective in dealing with enemies and putting a grin on my face as I watch enemies get devastated. I do have favorite characters – April and Raphael – but if I played online and someone took one of them, I wouldn’t have a problem choosing someone else.

Unfortunately, I wasn’t able to find anyone online with a review copy so I couldn’t test the online multiplayer, but based on how it feels, I can imagine playing with 4-6 players would be amazing. But I don’t know how well connections would function. 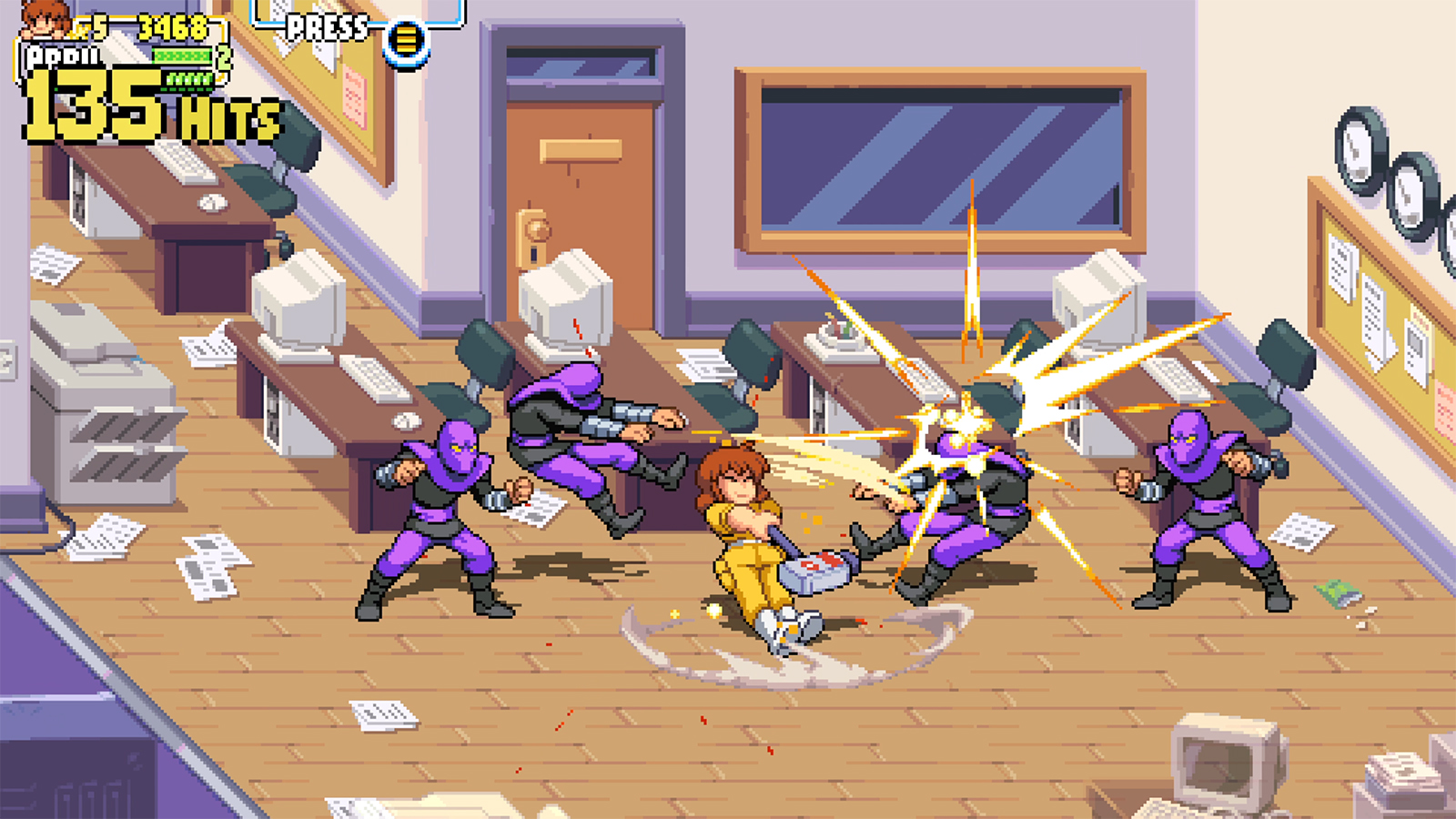 Even if I could find people, there are only two modes. You can join a story mode that takes you from level to level and allows for replays to finish challenges, faster times, or play them with a different character. That’s where I’ve found most of my satisfaction and fury. Arcade mode makes you play all the way through the 16 levels without the ability to save or change your character. It’s daunting only because it takes about 2 hours to finish, and if you have an interruption, you’re stuck leaving your game running on the PC like in the past with an NES. 16 episodes feels like a grind, too. It would have been nice to ignore a few levels for the sake of a shorter arcade experience.

Teenage Mutant Ninja Turtles: Shredder’s Revenge feels like it’s designed from an Ninja Turtles arcade beat ‘em up template, which strips it of creativity and originality and makes it feel predictable and familiar. But the fluid combat continually sucks me back in, even though that also suffers from combat designs that should’ve been left in the past.