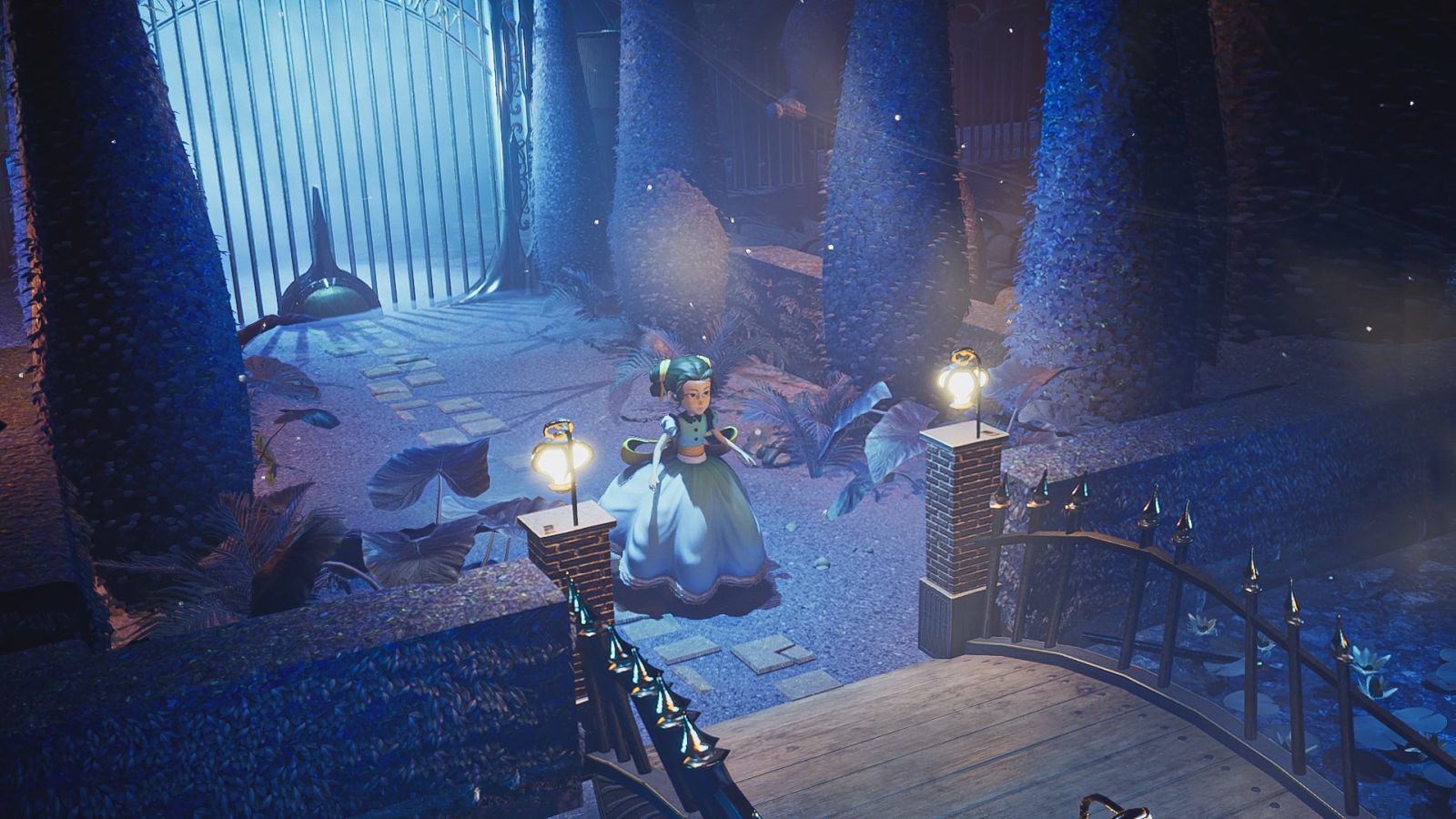 Tandem: A Tale of Shadows Review – Balance light and shadow in this unique twist on the puzzle game genre

Thomas Kane, the only son of the famous Kane Illusionists, has gone missing. Try as they might, Scotland Yard seems unable to locate him and the investigation has all but ground to a halt. Unable to cope with Kane’s disappearance, Emma, an insightful ten-year-old, decides to visit his mansion in London in hopes of unraveling details as to his whereabouts. Along the way a horse and carriage speeds by, causing a stuffed teddy bear to fly out the window. Emma stares in amazement as the bear quickly gets up and begins chasing after the carriage. Almost instinctively, Emma joins the race and eventually ends up in the Gardens of Thomas Kane’s mansion, where she learns the bear’s name – Fenton. The two decide to team up to find their way into Kane mansion and to hopefully unravel the mystery of Kane’s disappearance.

Tandem: A Tale of Shadows is composed solely of puzzle rooms. There are five chapters, with each chapter further broken down into missions. Each mission is a puzzle which must be completed before making your way to the chapter’s boss, which in and of itself is a large puzzle. These puzzles are completed by Emma and Fenton working together to navigate the labyrinthine levels and finding the keys necessary to progress to the next area of the house. 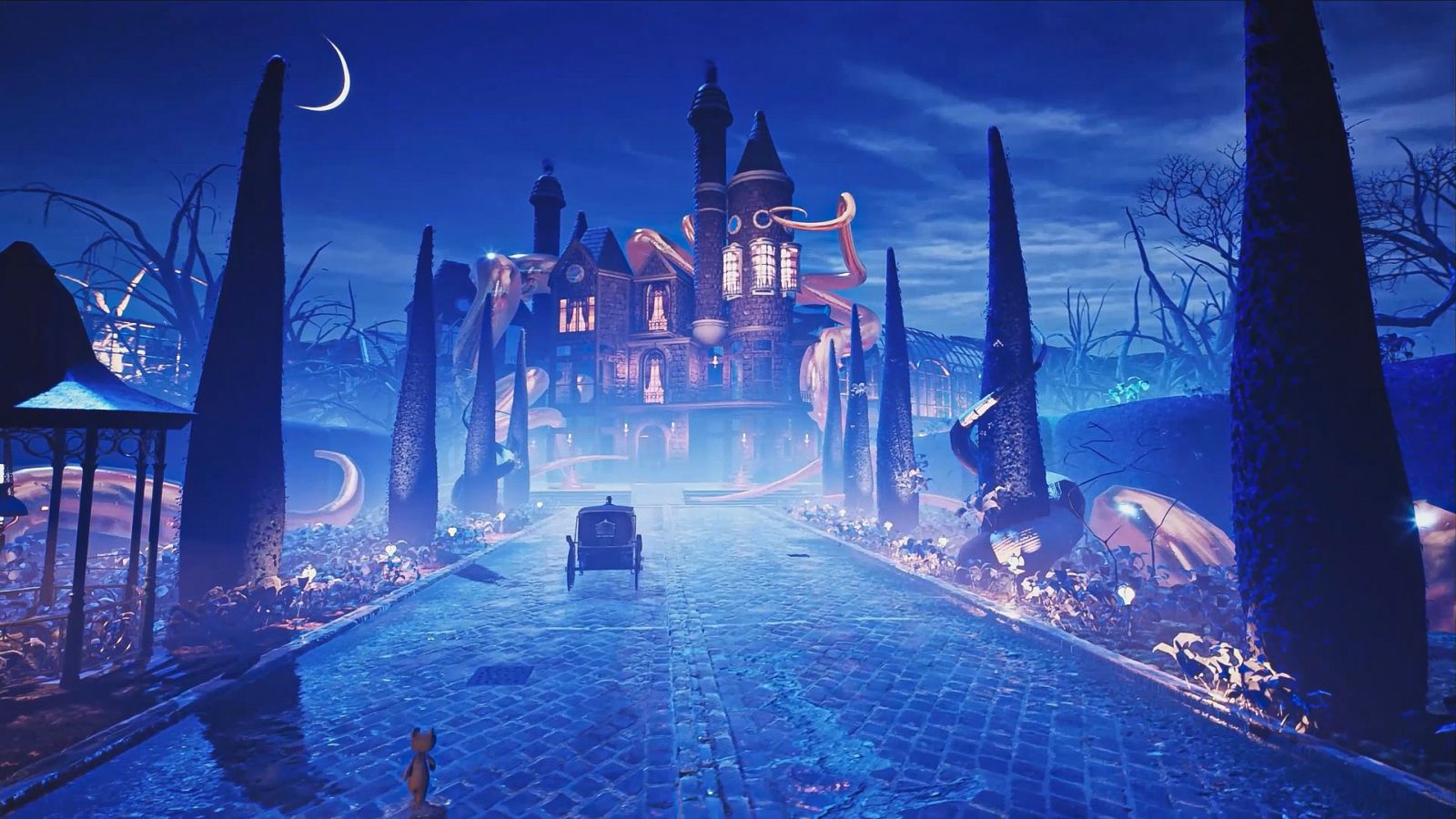 We’ve all played our fair share of puzzle games, so I’m sure your first question is – “what makes Tandem: A Tale of Shadows different?”  Where Tandem stands out is its ability to create a unique and complex world with puzzles almost solely revolving around light and shadows.

The thrust of the game is that Emma and Fenton must work together to navigate their way through the large and incredibly dangerous Kane mansion, hoping to find clues as to his disappearance along the way – although the story is more of a formality than anything, as it has little to do with the proceedings aside from giving the characters a reason to inhabit the space that they are in. The catch is – Emma is stuck to the ground, while Fenton can only move along the walls and, even then, only in areas of light – although he can walk across bridges created by shadows. 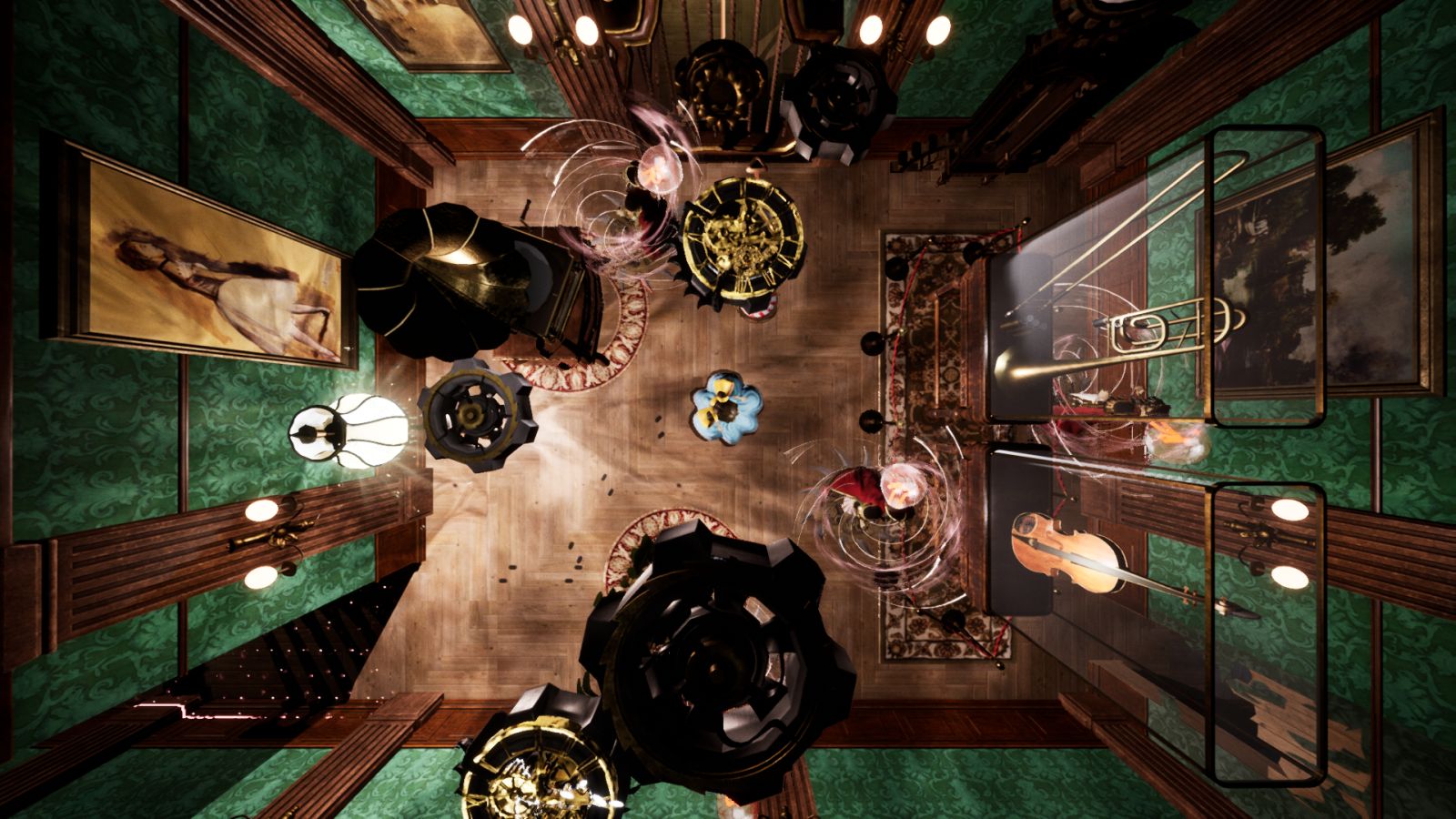 Using a small lamp she carries and various objects she encounters, Emma must create shadow paths or light up dark areas for Fenton to cross as they both work to reach the crystal shard at the end of each puzzle room. These shards add up to eventually create a key, which can then be used to exit the current area and move into the next.  While the concept sounds simple on paper, it is rather extraordinary the sheer amount of level design that stems from the light and shadow dynamic.

Each chapter features increasingly complex puzzles and normally a new type of threat. At first you may only be worrying about opening gates and finding the right object to create the perfect shadow angle, but eventually you’ll be dodging all-seeing eyes which alert knife wielding guards, or dragging gelatinous cubes through pastry filled kitchens as they cannibalize each other and grow larger.

This variety helps keep the game from becoming stale, as each level does essentially boil down to the same scenario: find a light source, create or clear a shadow, reach a key, open a door, find a way around an obstacle, reach the crystal shard, and repeat. Thankfully, the scenery is constantly changing, the puzzles themselves build on each other nicely, and each level strikes a near perfect balance between being challenging but not becoming frustrating. 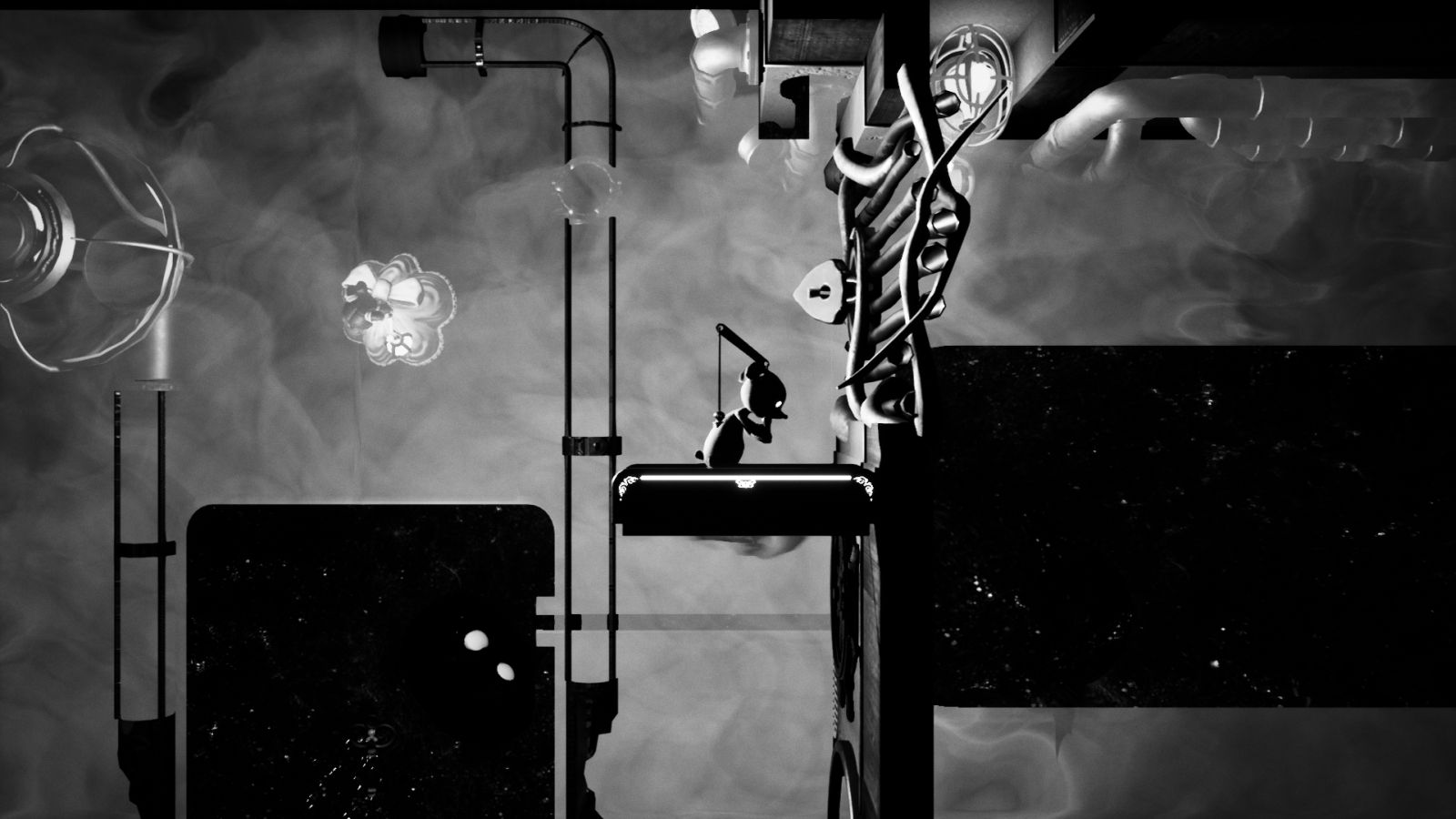 The later levels especially combine all your previous knowledge to create some incredibly unique puzzle rooms to solve. You’ll navigate Emma and Fenton through a variety of dangerous obstacles, as you frantically rush to reach the next area with the ever looming threat of a tiny mistake forcing you to repeat your previous steps. You’ll be chased by spiders, attacked by oil squids, eaten by a gelatinous cube, burnt up, chopped up, stomped on, and more in this surprisingly dangerous world. Thankfully, there is no penalty for death, save having to repeat a few steps to get back to where you were. This allows death, although sometimes upsetting, to never become frustrating and allows players to experiment with little repercussion.

With the touch of a button you can seamlessly switch between Emma and Fenton, and must continuously hop between the two to reach your goal. Most levels begin with Emma scoping out the room and the various areas Fenton must go, then finding a way to create the light source – or shadow – necessary for Fenton to reach it. Fenton will then cross, sometimes narrowly avoiding death by a number of horrifying means as there always seems to be something sharp just below him – and reach the area to either press a button. pull a level. or perform whatever task may be necessary to clear a pathway for Emma to the next room. You’ll then rinse and repeat this process until you reach the crystal shard. Each room progressively becomes longer and more complex to complete, while each chapter throws new enemies and obstacles at you on top of those previously established to constantly switch up your tactics. 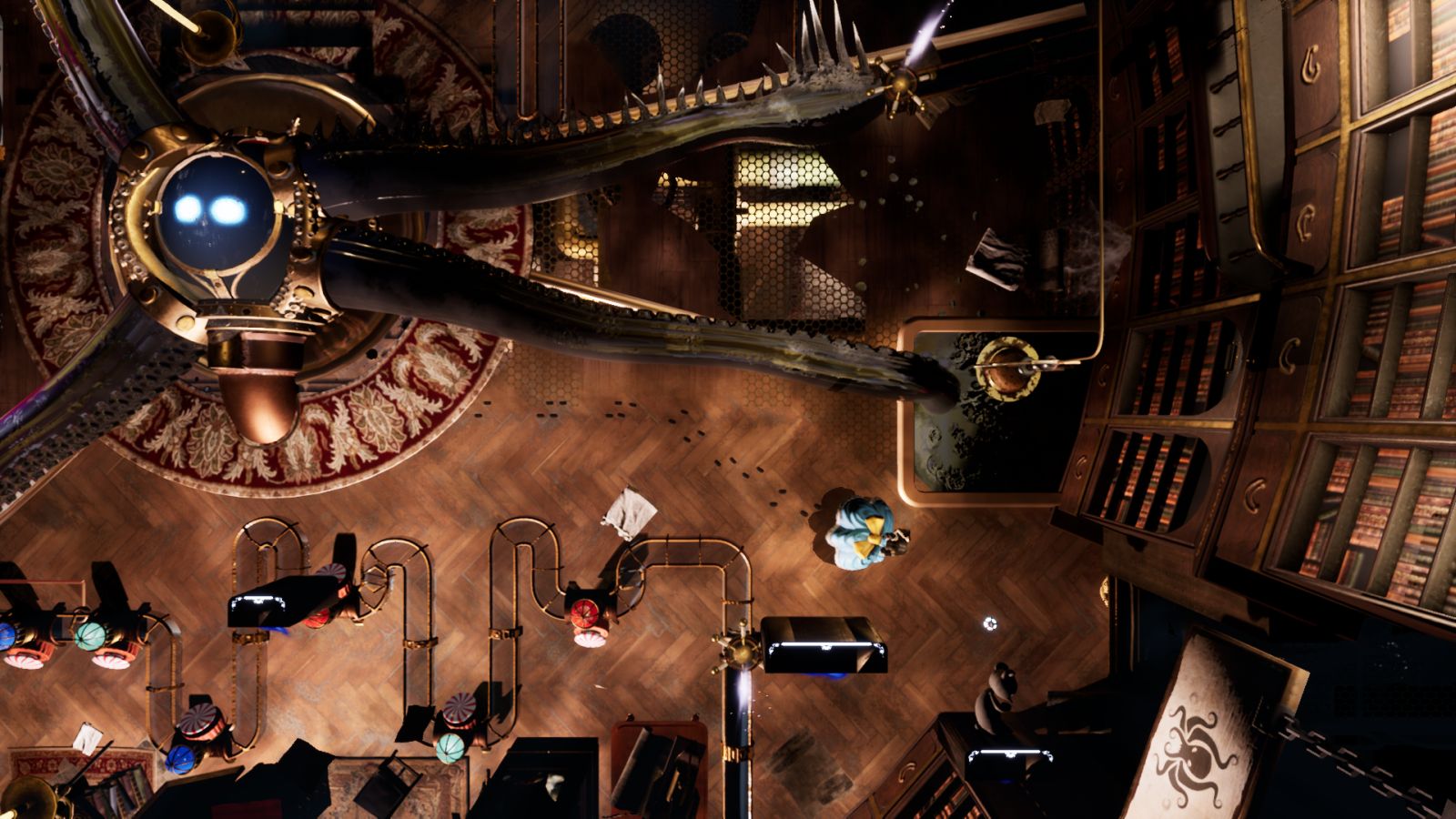 The game consists of five chapters, each consisting of around 10 levels and then a boss level. The boss of each area is essentially a more complex puzzle room, involving multiple obstacles to overcome. These rooms are among my favorite as they always made creative use of the obstacles, enemies, and situations established throughout the chapter. I personally most enjoyed a specific section where, as Emma, I had to start the flow of oil through pipes and then quickly switch back and forth between Emma and Fenton as Fenton followed the flow to reach higher planes and Emma kept rerouting light to clear the path. It required precision and near perfect timing, and was a standout piece that really showcased the cool ideas Tandem: A Tale of Shadows has on display.

Unfortunately, the game is quite short at only five or so hours for a first run through, with little replayability aside from maybe speedrunning. Still, the sheer quality of the puzzles on display and the craftsmanship that went into creating such a unique setting and game idea helps overcome any minor gripes that someone may have with the game, such as the slightly janky cutscenes and dialogue. While not jarringly bad, and while looking quite serviceable, there were moments which seemed to cut in and out or end too abruptly, and sometimes I felt I had missed a scene but replaying found that the scene just ended abruptly for whatever reason. Essentially there is only what is needed and nothing more, with no scene lingering or lasting more than a few seconds before thrusting you back into the gameplay.

Tandem: A Tale of Shadows Review – Balance light and shadow in this unique twist on the puzzle game genre

Tandem: A Tale of Shadows

Tandem: A Tale of Shadows is a surprisingly unique twist on the puzzle genre, making incredible use of light and shadow. The dual character perspective is clever, and helps to create increasingly complex puzzles, which thankfully avoid crossing the line from challenging to frustrating. The short length may upset players hoping for a longer adventure, but helps keep the game flowing smoothly and prevents its core gameplay from becoming stale. Add in a beautifully crafted world and unique boss fights, and Tandem begins to stand out from other puzzler games currently on the market.

Richard Allen is a freelance writer and contributing editor for various publications. When not writing for Gaming Trend you can find him covering theatre for Broadway World, movies and TV for Fandomize, or working on original stories. An avid retro gamer, he is overly obsessed with Dragon's Lair. Chat with him via @thricetheartist on Twitter and @richardallenwrites on Facebook and Instagram.
Related Articles: Tandem: A Tale of Shadows
Share
Tweet
Share
Submit