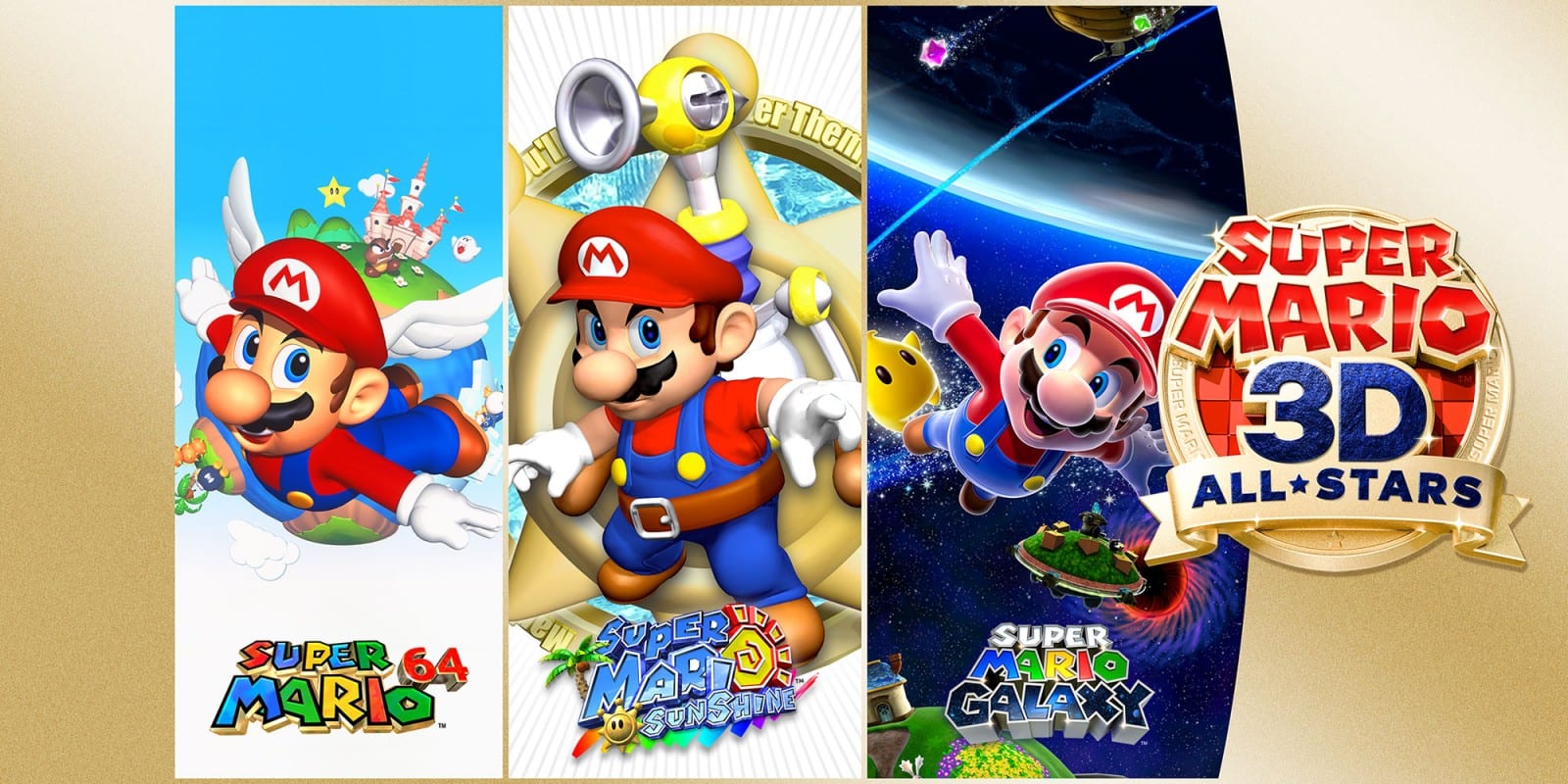 When Super Mario All-Stars debuted on the Super Nintendo, the box art illustrated Mario dressed in a tuxedo and a magic wand in hand. It showed how special and magical the collection was meant to be. That magic continued by updating Super Mario Bros., The Lost Levels, Super Mario Bros. 2, and Super Mario Bros. 3 to match Super Mario World’s sounds and aesthetic. That’s not the case for Super Mario 3D All-Stars, the 35th anniversary collection featuring Super Mario 64, Super Mario Sunshine, and Super Mario Galaxy. The box art is just the three games with their respective box art merely cropped to fit the Nintendo Switch case. And none of the games feature any notable redesigns or makeovers. There’s just enough spit rubbed in to make sure each game works on the Switch and aren’t abject eyesores on modern TV’s. Each game remains great, but Nintendo’s effort to make their second All-Star collection special is pathetic.

Super Mario 3D All-Stars raises the question: “How does Nintendo define an All-Stars collection?” You would think it’s by including our favorite Mario games as they originally played, but with a fresh coat of paint. But that’s not the approach Nintendo took for this 3D collection. Each game is only given an aspect ratio upgrade with minimal resolution enhancements. Mario 64’s resolution has been increased to 960×720, and doesn’t look as jagged as playing the original, but it’s also not much better than playing the original Nintendo 64 version with a Super 64 HD adapter attached on a 1080p monitor. Mario Sunshine and Mario Galaxy have been upgraded to 1080p when in docked mode (720p undocked), but heartbreakingly doesn’t offer any other graphical updates. It’s a shame Nintendo didn’t put any effort to improve the visual fidelity of any of these games, especially since it doesn’t seem like Nintendo’s intention is preserving its graphical legacy. There’s no documentary text or videos detailing the efforts it took to develop these games and there are no screenshots giving us a before and after. It simply feels like a low-effort port.

I also thought the definition of an All-Stars collection would be including all of the hits. 3D All-Stars is bizarrely missing Mario 3D World. And if it’s missing 3D World, Mario Galaxy 2 certainly isn’t on the table. If Mario Bros. 2 – easily the weakest Mario game in the original collection – deserved to be included, and if Mario Sunshine – a game Mario fans inarguably have mixed feelings about – can be included in this All-Star collection, there is no reason why Mario 3D World should be left out. The only feature that’s special is the inclusion of the full soundtracks from each game. Thankfully, Nintendo did offer the bare minimum by allowing us to listen to the soundtracks while putting the Switch screen to sleep, and you can randomize the songs from all three soundtracks. 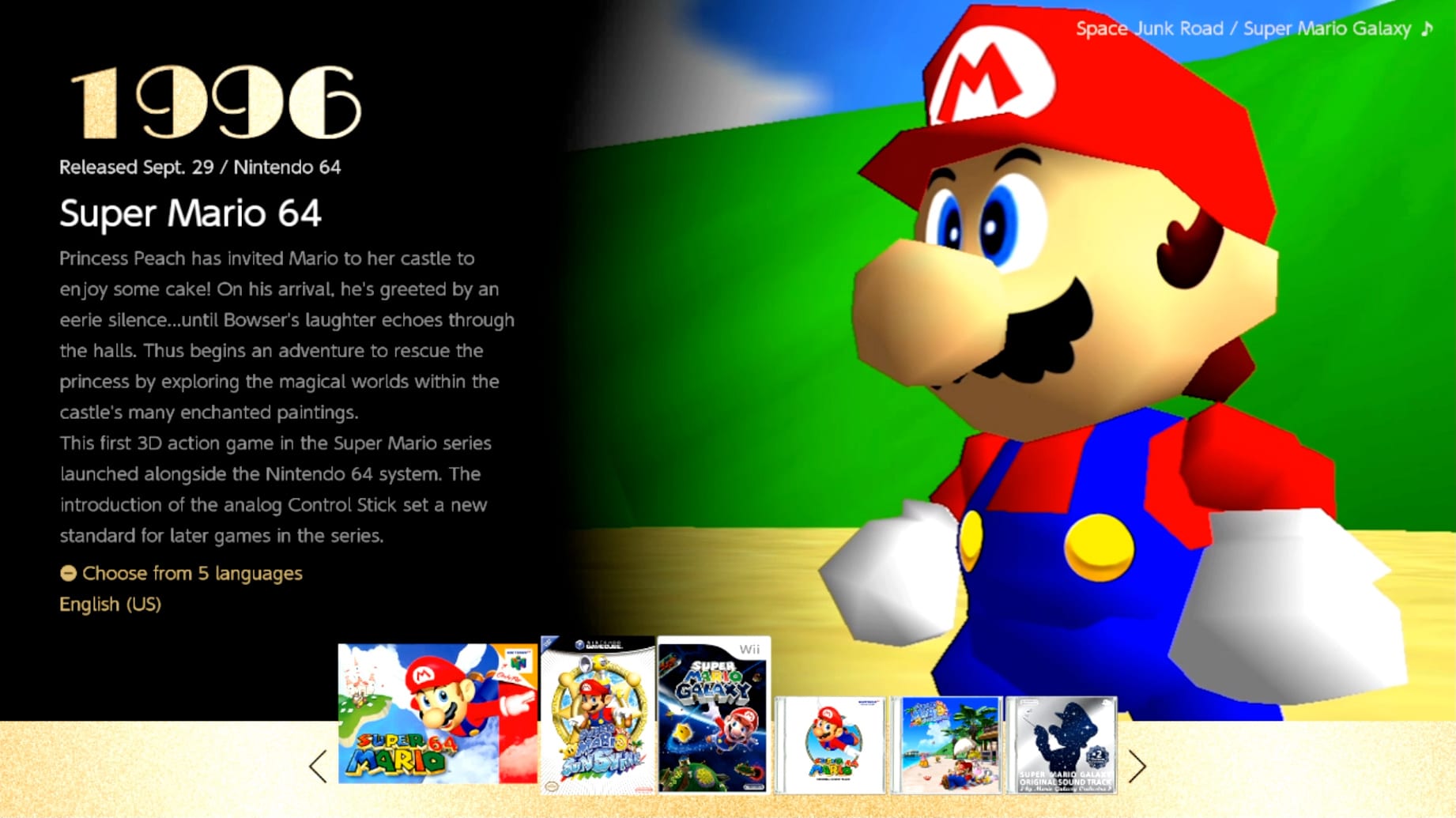 I’m not suggesting updating each 3D game is as easy as updating the 2D games. It’s a heck of a lot more work and money. But this was supposed to be a 35th anniversary special. Nintendo is so good at creating great experiences like Breath of the Wild, Mario Odyssey, and Animal Crossing: New Horizons, it’s disappointing Nintendo didn’t fully remaster these games or at least give them makeovers that fit Mario’s current aesthetics.

Of course, the games themselves are remarkable no matter how we play them – with the exception of Sunshine. Super Mario 64, while stuck with archaic graphics, stands the test of time with tight controls and inspired level design that paved the way for every Mario game after it, let alone every 3D adventure game after it. Running, jumping, wall kicking, and long jumping through 15 playgrounds while searching for well-hidden stars amongst tricky puzzles and platforming feels as modern as any current 3D adventure game. It’s easy to beat after all these years, and several playthroughs, but I still struggled with missions I always struggled with. It’s not a perfect port, though. I encountered a glitch in Dire, Dire Docks where the sliding poles didn’t load on the red coins level. And yes, I chose the correct level. I had to close 3D All-Stars to the Home menu in order for them to appear. Besides that, I had zero problems other than the exasperating camera.

This is the “Shindou Pak Taiou” version (A Japanese re-release version in 1997 that contained Rumble Pak support. Also, “So long gay Bowser” is gone.), so I don’t know if Nintendo made camera adjustments compared to the original 1996 American version (that camera wasn’t great either), but I don’t remember the camera being so unwieldy. You can expect to enjoy star-hunting in portable mode, though. It’s like playing the DS version except with an actual control stick. This is the way I envisioned playing Mario 64 when the Nintendo DS came around, and this is now the best portable version of Mario 64. 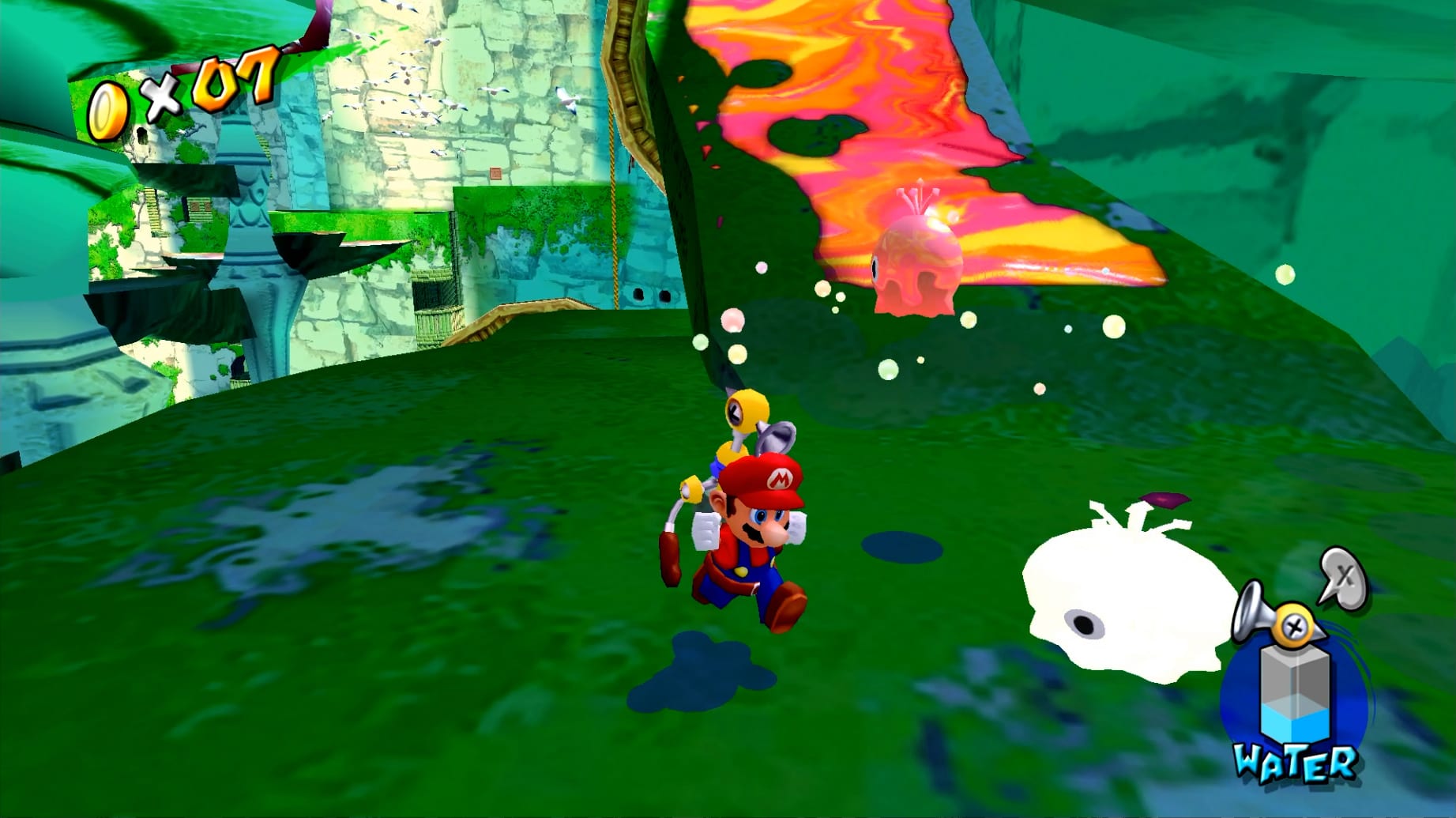 Then there’s the charmer of the pack: Super Mario Galaxy. Galaxy includes some of Nintendo’s finest level designs inspired by the weird limitations of spherical gravity. I never finished Galaxy the first time around because wagging the controller to make Mario spin was obnoxious. Thankfully, that’s gone. Spinning is now mapped to the Y button! That change alone makes Galaxy much more enjoyable. But it’s still too easy, especially compared to Mario 64 and Sunshine. I rarely died and accumulated way too many lives. Undocked mode runs smoothly but I preferred to play Galaxy docked. In docked mode, I used the Pro Controller’s gyro motion to catch star bits, which conveniently allowed me to leave all my fingers on buttons. When playing undocked, you have to tap the screen to shoot bits and swipe to collect bits, which means sacrificing some control for a moment. It’s very responsive but when Mario’s in the air, it’s hard to find a comfortable way to hold the Switch.

And then there’s Super Mario Sunshine. I’ve always believed Mario Sunshine was a good game but not a good Mario game. Nevertheless, it plays fine overall. However, you can’t control FLUDD’s water pressure. It’s always full blast because the Switch doesn’t have the GameCube’s pressure triggers. And using a GameCube controller won’t fix that because you can’t use a GameCube controller for some indescribable reason. The worst part is that there’s no inverted option for FLUDD. Inverted players exist, Nintendo. How rude. 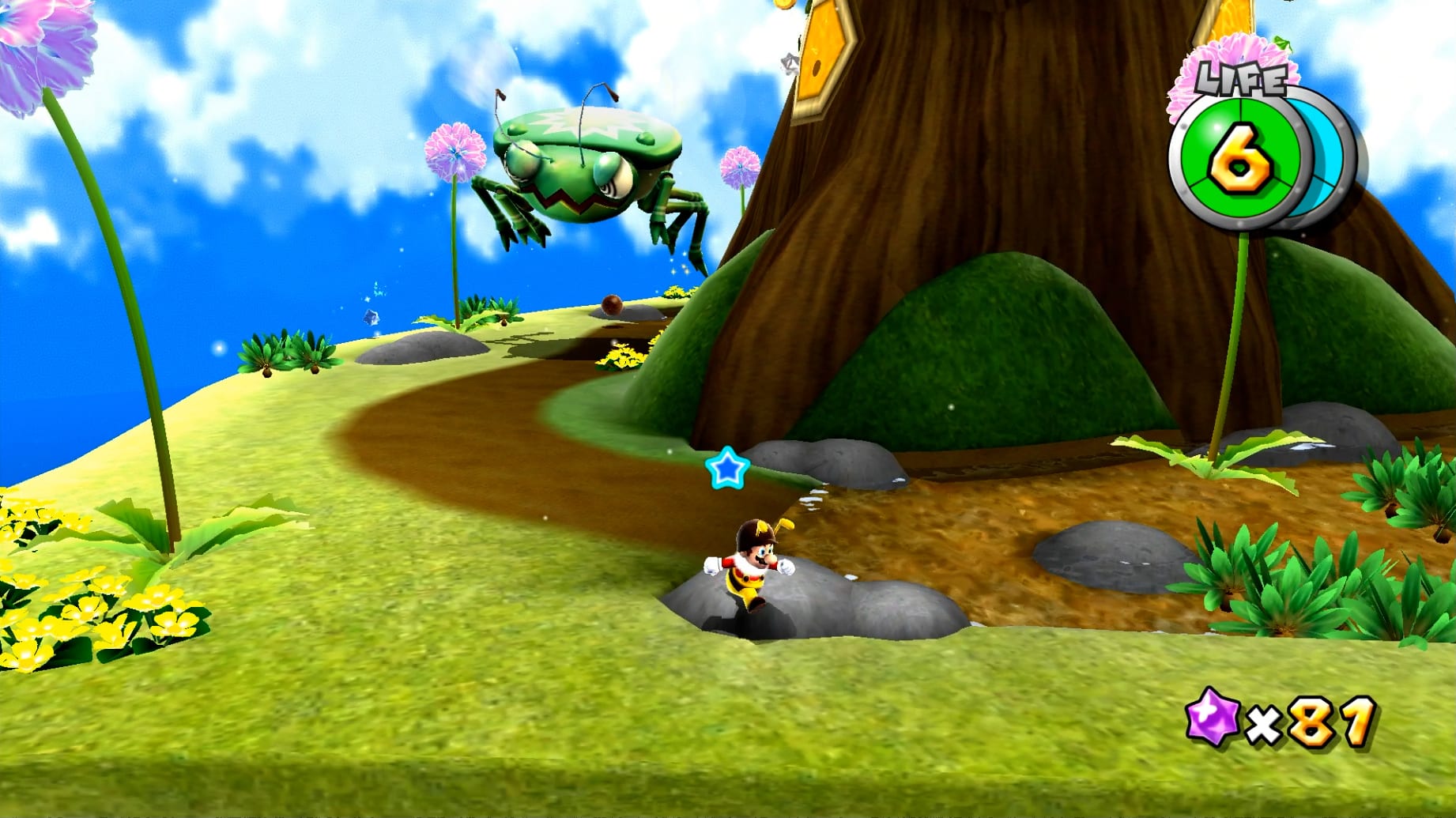 Sunshine doesn’t suffer in undocked mode. Docked or undocked, it’s still a great looking game and the framerate, while still not as smooth as Galaxy, seems better than the GameCube version. If you loved it, Sunshine still dances with its tropical soundtrack, ludicrously large levels, and all the water shooting you could desire.

If you haven’t played any of these classics – even Sunshine – you need to. But if you already have these games and can still play them on their respective platforms or through Virtual Console, there’s no reason to buy this collection. You’re playing the, mostly, original versions. The only reasons to invest in Super Mario 3D All-Stars is if you’re a streamer wanting to play these games without emulators, you’ve never been able to play these games and you don’t own them, you don’t have the right TV to play the originals, or you’re desperate to play these games on the go. Otherwise, this does not have the celebratory distinction or flair for such an occasion like Mario’s 35th anniversary collection or anything that sets itself apart from its original releases or Virtual Console offerings.

It's tough because you should play the games, but this collection is only a must-have if you’ve never played them or have no means of playing the copies you own. Otherwise, the included soundtracks are not enough to make this 35th anniversary package feel special enough to warrant a buy.