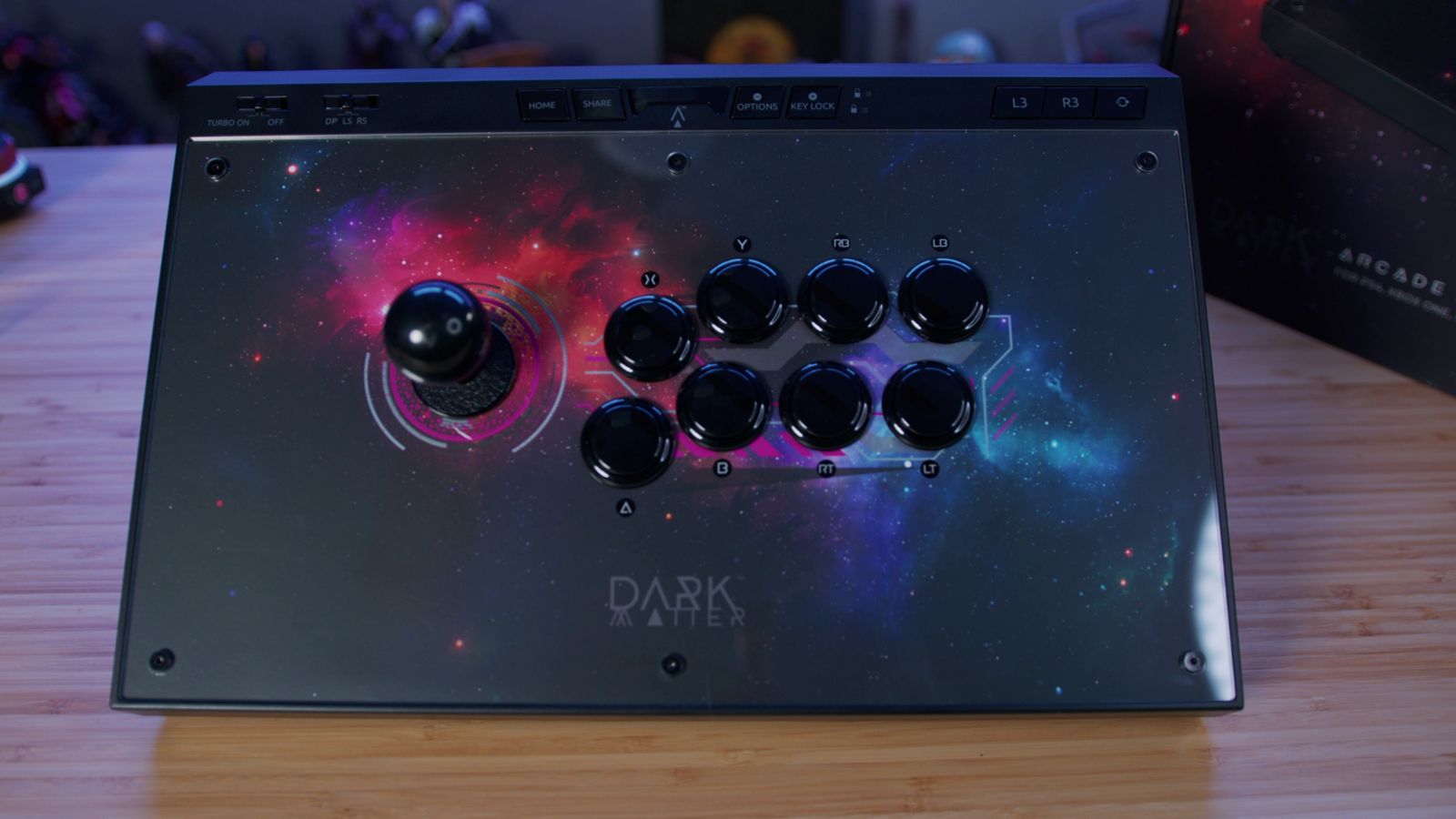 At the start of 2022, Monoprice moved into a completely new realm of devices. Sure, you might know them as a great source for cables, but if that’s all you know them for it’s likely you’ve not visited the site in a while. Now they tackle things like monitor mounts, Bluetooth receivers, network switches, splitters, extenders, chargers, monitors, 3D Printers, HDMI splitters, speakers, mice, cameras, headsets, and far more. Now, they are headed into the realm of gaming, with racing wheels, flight sticks, and now fight sticks. We broke out our favorite fighters and checked out the Dark Matter Fight Stick. Time to see if this is a “Ring Out” or a “KO”.

First and foremost, the Dark Matter is a full-sized fight stick. That means eight buttons, a full sized arcade stick, and enough weight and surface to stay put, no matter how intense the action gets. Before we crack it open to see what’s inside, let’s see what’s on the surface.

A home, share, options, and key lock key adorn one side of the Dark Matter stick, with an L3 and R3 button along with a mode switch key along the top. These provide all of the functionality of a console controller, though it’s worth noting that if you are using the stick on PlayStation or Xbox, you’ll still need to plug in a controller into the rear of the device. PC, Nintendo Switch, and interestingly enough, Steam Deck, don’t have this requirement.

There is a compartment in the rear of the Dark Matter with a number of goodies therein. Inside you’ll find a hardwired USB-A cable (it’d be great if future models could switch to a swappable USB-C cable, please), as well as a USB-C cable, and a miniUSB cable, ensuring you can connect to a very wide variety of devices. Surprisingly, it also contains a hex screwdriver – precisely what you’ll need for the biggest advantage the Dark Matter brings to the table.

Pulling the hex head screws from the rear of the Dark Matter Fight stick reveals an extraordinarily well cabled set of buttons and a stick. As the device uses a legit Sanwa Denshi joystick, as well as Sanwa buttons, there’s literally nowhere to improve. It also means that if something failed far down the line, you could easily swap it out by unclipping the offending button and popping in a new one. Similarly, swapping the stick is a single connector and four screws, meaning you’ve got a wealth of options available here as well. 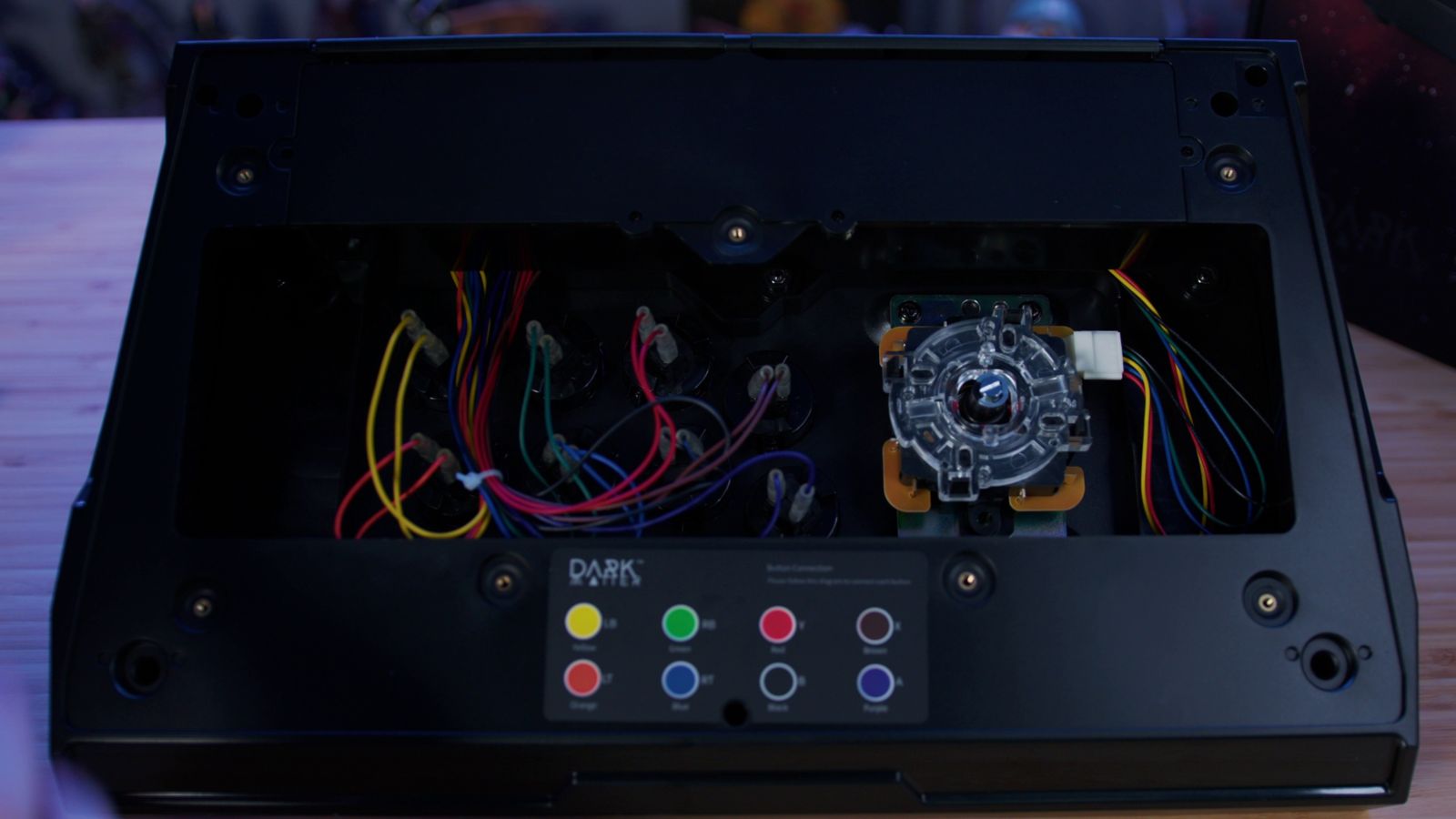 The top panel for the Dark Matter is removable. This also means you can swap out the top panel artwork for a true arcade look and feel. I recommend Game On Grafix for custom work – there’s simply nobody better.

I was happy to see that the Dark Matter fight stick is reasonably priced at $120. For something sporting genuine Sanwa parts, an aluminum chassis, this level of customization and user-maintainability, and platform flexibility, I would have expected it to retail far higher. A PlayStation-only Hori fight stick will set you back $199, and a similarly-specced Mayflash with Sanwa parts will run you $144. Mad Catz is proud of their stick at $189, and ProArcade is happy enough to charge $169 for the same parts. Monoprice is putting them all in their place with some aggressive pricing, especially given the build quality. At this price, you can almost afford two for the same price as a competitor.

I put the device through its paces with a number of games, despite my attempt at humor during the video review. I tested several King of Fighters titles, a few Blazblue games, more SNK goodness with Samurai Shodown, Mortal Kombat XI, Teenage Mutant Ninja Turtles: The Cowabunga Collection, and Capcom Fighting Collection. I’d showcase them, but honestly the conclusion is the same either way – it feels like the real deal, and I couldn’t detect any lag whatsoever. Even in my extra-dumb configuration of running Street Fighter V (an unsupported game) on Steam Deck, via a USB-C hub, and connected to a high-latency monitor, the experience was near perfect, with any additional latency was the fault of the monitor.

Every once in a while we get a product that you struggle to find a negative, and this Dark Matter Fight Stick is one of them. If you’ve got a fight fan in your family, or you trade fisticuffs yourself, this is a top tier fight stick at an impossible price.

Ron Burke is the Editor in Chief for Gaming Trend. Currently living in Fort Worth, Texas, Ron is an old-school gamer who enjoys CRPGs, action/adventure, platformers, music games, and has recently gotten into tabletop gaming. Ron is also a fourth degree black belt, with a Master's rank in Matsumura Seito Shōrin-ryū, Moo Duk Kwan Tang Soo Do, Universal Tang Soo Do Alliance, and International Tang Soo Do Federation. He also holds ranks in several other styles in his search to be a well-rounded fighter. Ron has been married to Gaming Trend Editor, Laura Burke, for 21 years. They have three dogs - Pazuzu (Irish Terrier), Atë, and Calliope (both Australian Kelpie/Pit Bull mixes).
Related Articles: Dark Matter Fight Stick, Hardware
Share
Tweet
Share
Submit