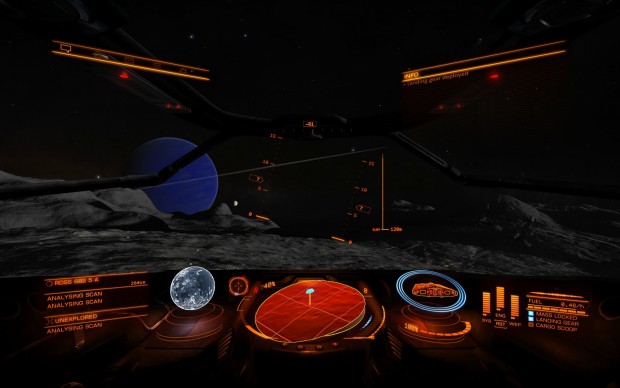 Though enjoying it greatly, Elite Dangerous has sat in my backlog for some time. A mixture of work and school have kept me from exploring its vast expanses of space any more, but with the release of the Horizons expansion, I found the perfect excuse to get down and actually explore the planets I’ve spent so many months flying by.

The first thing I noticed was that simply jumping back into Elite Dangerous, I felt the effect of the steep learning curve once again. As it had been several months since I played, leaving me to re-acclimate myself to be able to leave a space station without splattering myself against the walls amidst the laughter of my fellow station dwellers.

After knocking off the rust (and a few of the aforementioned wall-splats), I began to outfit my ship with the necessary equipment, including the SRV — my ticket to explore the planet surface. When landing on a planet for the first time, I found through random happenstance that landing on a high gravity planet and in a large ship was a first class ticket to slamming my face into the windshield with a side order of hull damage. I was clearly rusty.

It is every bit as beautiful as you remember.

The interface for landing is intuitive. As you near the surface, an elevation glide interface pointing you in the proper direction is superimposed along the screen. This will show how steep of an angle your descent is currently, hopefully preventing you from turning your ship into a smouldering pile of slag on the surface. Once you clear the glide entry portion of the descent, you manually lower your ship to the surface to find a nice flat spot to land and deploy the SRV. Each planet I went to was moon-like in that none had an atmosphere, and the landscape was never ending and barren. True to the core product, there are certainly some rather incredible moments when you roll your SRV into a crater and then then gawk at the interstellar view above, but I was hoping for more to do on the surface.

Running around in the SRV can be quite fun. It is reminiscent of an off-road ATV in the desert. Except in zero gravity which makes things all that much more exciting. The terrain is realistically textured as you scream along the landscape at full speed until a rock will upend your little rover in a violent shake rattle and roll that will leave anyone using an oculus debilitated and scrambling for a vomit bag. A 4K monitor makes for a very impressive scene as the planet surface takes on a convincing lifelike look and feel. There are sweeping hillside formations, craters and the occasional cliff you never saw until you go over the edge.

The most fun I had in Horizons was racing around with a friend as we used the thrusters to propel ourselves, rocketjump style, to even greater heights over minor obstacles or ravines. Sometimes we even landed right side up. The SRV can gather minerals on the planet surface which you can cart off to your ship or use them to refuel the rover, rearm it, or repair damage. You can even get performance bonuses depending on the quality of the minerals you have access to. When on a kill mission, you can also take on a turret view so you can get the gunners sight for better accuracy while still being able move the SRV so you aren’t a stationary target. I thought it was a nice touch that you can remotely control your ship while in the rover.
Playing with the controls, I found an option to dismiss my ship. Curious, I selected it. The engines of my Vulture roared to life as it lifted off and streaked into orbit. Two things crossed my mind as this happened. Firstly, that looked absolutely amazing! Then the silence settles in and in space, nobody can hear you scream “How the holy hell am I getting home?!?”. Thankfully, once you leave the vicinity of any outposts, you can call your ship back so it lands nearby your SRV. This look more amazing than I can readily describe here.

All of that said, planet visitation ends up feeling cursory. It is a visually appealing change after staring at station walls and space, but it really doesn’t draw you in and stand on its own in terms of interactivity. It is just you with the occasional drone hovering around an isolated outpost. It would be a nice addition if there was the capability to actually leave your SRV and get around on foot, or be able to enter some of the outposts. Being able drive up to the settlements is fine but they are more background as players cannot establish their own outposts. Or perhaps have pirate or criminal syndicate outposts with patrols that don’t take kindly to anyone they don’t recognize. It would also be fantastic to have land based installations on par with orbital stations that act as staging areas for the Federation, Empire, or Alliance.

I sincerely hope we can one day make our own outposts.

Going into this, I was rather nervous at what the scale of the planets would entail. When taking in the massive size of the Elite Dangerous universe, you feel as insignificant as your burned-out high school counselor said you are. I was concerned that planet side exploration would pale by comparison to the impressive main game, relegating this expansion to a contained sandbox experience. I was pleasantly surprised to find that there was indeed a vast expanse on the surface to roll around and sightsee. The downside is that within this wide open range of unlimited possibility, there really isn’t much to do that is any different from before Horizons was released. You can mine, take on search and rescue or kill missions, explore, and grind faction. Precisely all the same things that players have been doing in space, leaving me feeling like there was very little new beyond beautiful vistas.

In short, although Horizons is entertaining, it is a bit underwhelming given the high bar that was set with the initial Elite Dangerous release. Perhaps with future expansions, there will be more content that planetside landings can leverage to give the game a bit more flavor. Until then, I’ll be enjoying the game from the cockpit of my ship.