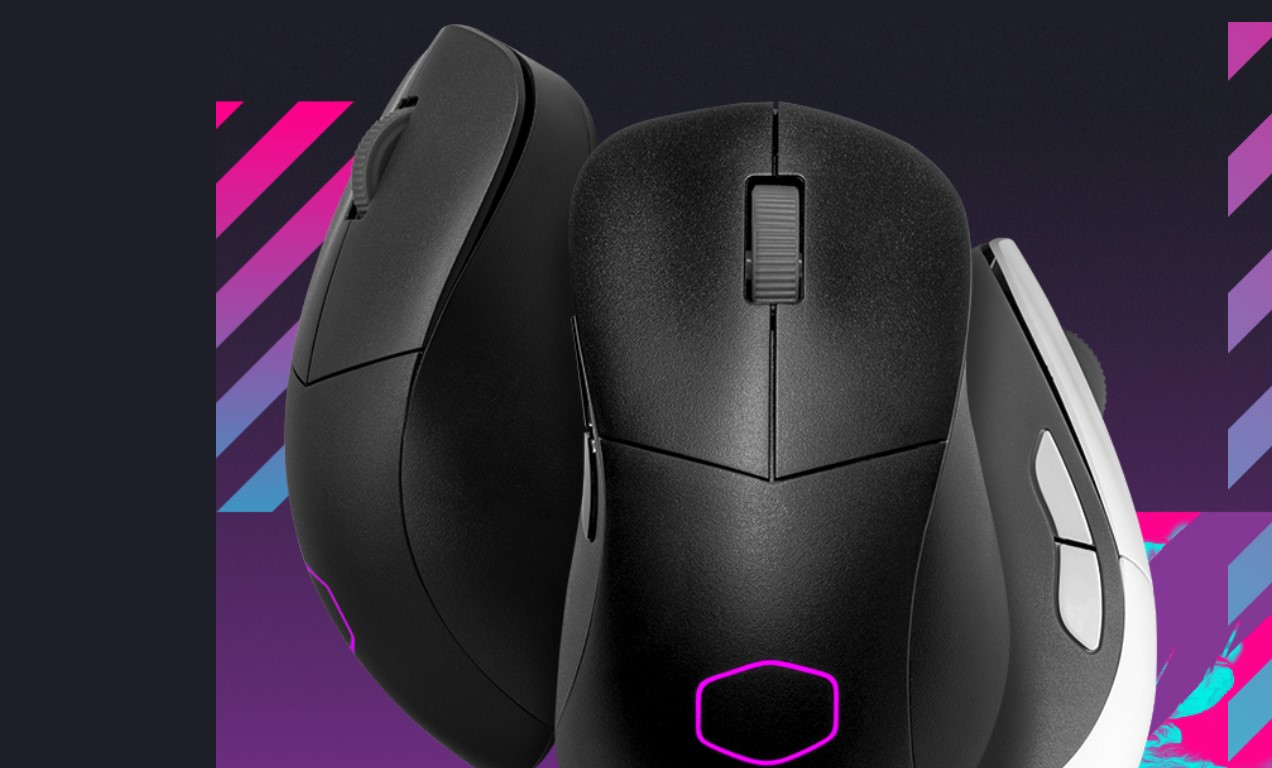 It’s always important to have the right equipment. There’s a reason I pump plenty of money into good accessories. When I’m playing Call Of Duty, I want to be able to hear the exact direction an enemy’s footsteps are coming from, and the amount I’ve spent on a headset could change the momentum in a penultimate round of Search and Destroy. I’ve also dropped a bunch on an Xbox Elite Series 2 controller, and you better bet I felt the difference tonight when I was upstairs playing on my PS5. Purchasing the correct products can be influential in where your gaming takes you, and when the opportunity arose to review the new Cooler Master MM731 Gaming Mouse, I just couldn’t refuse.

Let’s go ahead and get the specs out of the way. The MM731 boasts a more classic design, looking almost like any old mouse with it’s ergonomic shape. While it may look like an oldie, it’s far from it, weighing in at less than sixty grams, which blows me away. My main mouse has been the HyperX Pulsefire Haste (our review), and to get to it’s fifty-nine grams it utilizes a honeycomb shell. Somehow, the MM731 doesn’t need that to get there at all, so it’s rather impressive. It also feels durable, meaning they didn’t cheap out on the plastic to sell the weight over longevity. The only bad thing about the design is it’s exclusive for right handers… sorry lefties.

The MM730 and MM731 – Lightspeed Responsiveness

While the design works just fine, I can say it’s design is a bit raised in a way I’m not used to. The PulseFire Haste is a lot flatter, and is a little bit more comfortable because of it. That’s not to say the MM731 isn’t comfy however, and as I’ve used it more and more I’ve adjusted to the feel. As for other things you have to adjust to, the mouse buttons are well placed to make sure you’re able to click away without a worry in the world. You’ve got five buttons to use, the right and left clickers, the wheel, and two side buttons. All of these feel nice and have that clicky feel, and the wheel in particular has a really satisfying roll to it, clicking excellently into place each time. I am disappointed in the DPI button resting on the bottom of the mouse; while I don’t generally need it, having it right there behind the mouse wheel on my previous mouse was nice.

Speaking of DPI, the MM731 is loaded with an optical sensor with up to 19,000 DPI. Yep, that’s a lot of DPI. The easiest way to explain it for those unfamiliar with the term is that it stands for “dots per linear inch, and the higher the DPI, the more sensitive your mouse is to movement. If you go as high as possible, barely touching the mouse may throw it from one end of the screen to the other. I’m not used to that at all, but the more options a person has, the better. 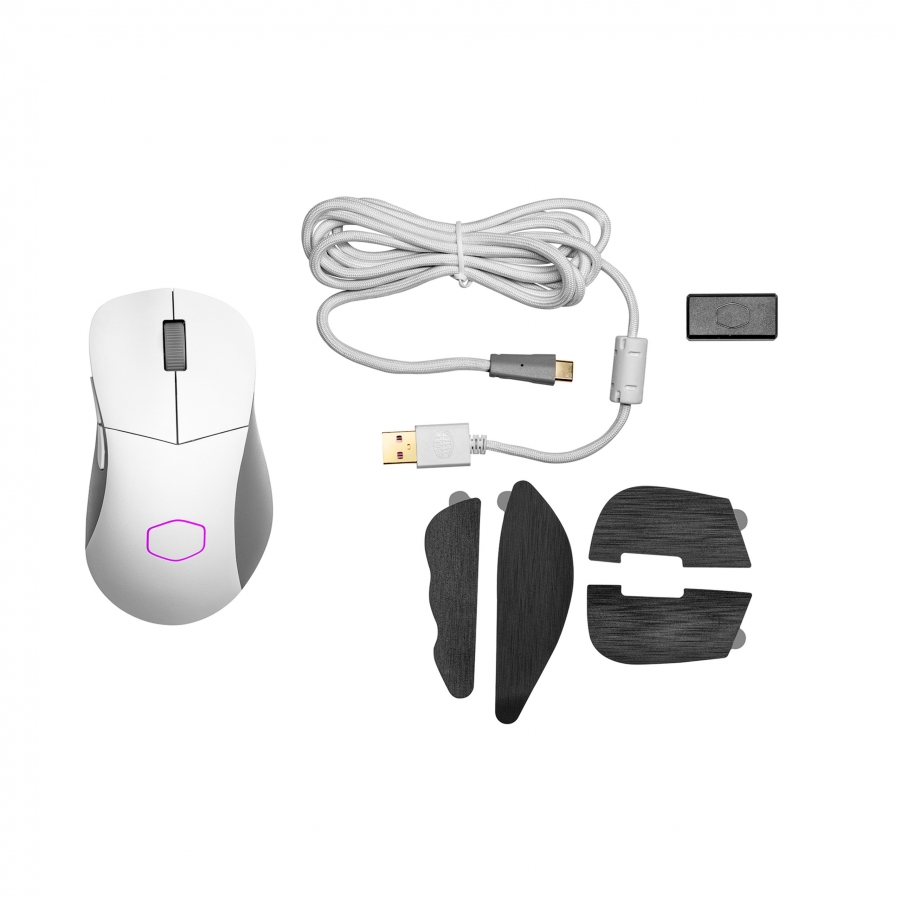 Speaking of options, an area the MM731 really excels in is it’s versatility. My previous mouse was wired, and while that’s good and fine, I’d like to be able to switch things up as well as my mouse have the ability to travel. Cooler Master has answered my wish with this mouse, it functions incredibly well as a hybrid, with Bluetooth, wireless, and wired options. So far I’ve not seen any drawback to using it in any of these ways, with the clicks feeling precise and the accuracy of my movement not bogged down because of a slow wireless connection. The best part is being able to use this wired with my computer if I’m low on a charge, or with my Ipad if I need to write up a quick news article and want the ease of use. It even syncs up to my Razer Phone 2 crazy enough. I plan on getting a Steam Deck later this year, so I hope this works as well with it as I’ve seen it work with everything else.

I mentioned being low on a charge, and we all know there’s nothing more frustrating than having to run and pull some AA’s from the TV remote when you’re in the middle of a raid. You won’t have to worry about that with the MM731, as it has a rechargeable battery. Besides that, it’s very efficient with it, featuring up to 72 hours of charge with the 2.4mhz dongle that rests snugly under a panel on the bottom, and a ridiculous 190 hours connected to Bluetooth. I haven’t had it long enough to really put every hour of battery life through its paces, but it works pretty darn well so far. I’m especially happy with being able to use it wired if need be, with just flipping a switch on the bottom to switch between all three modes. The included cable is also a nice ultraweave made very lightweight, and although heftier than some others on the market it does nicely. Oh, and it’s a USB-C cable as well, further strengthening the versatility. 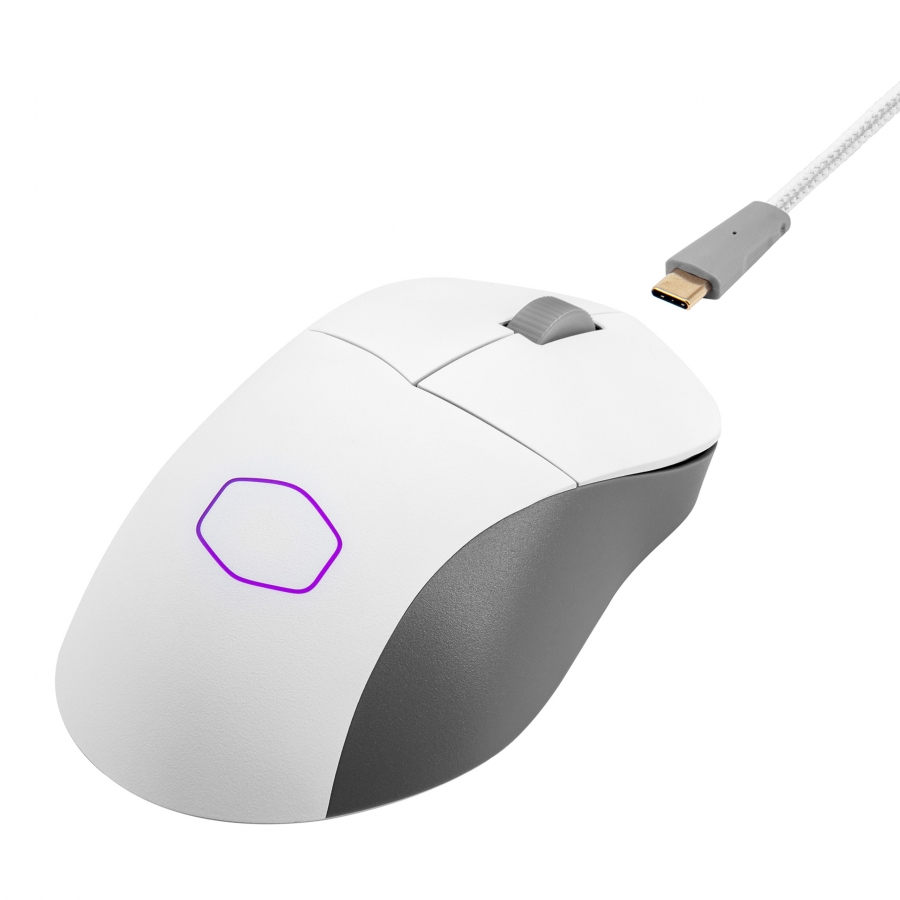 While all of this is good, it doesn’t matter if you can’t game with it, especially given $89.99 is a pretty penny. I’ve definitely seen some different places complaining about a “floaty” feel to the responsiveness of the sensors, but if that is an issue, I have yet to see it. Upon testing it side by side with my HyperX Pulsefire Haste, I saw little difference in how quickly my movements were recognized by the sensor. It moves well, and if I ever decide to go full mouse and keyboard when I game (I’m a controller player at heart), I’ll be able to amp up the DPI and really get moving.

Now, the customization software for the MM731 is good, but I have a qualm with it. I have yet for this darn mouse to update using the MasterPlus+ download directly from the MM731 page or the firmware update they sent me directly. It’s pretty frustrating, especially if anything were impairing my performance, but it just sits on a “Getting the current firmware version of the dongle and mouse, it will take a while.” Believe me, it is taking a while.

On the plus side, once you exit the firmware attempt and reboot MasterPlus+, you’re taken to the full range of what the mouse can do. There’s just about everything here, changing around the RGB lighting, switching up your DPI or buttons, adding macros and profiles, the whole shebang. The only thing in there that doesn’t really matter is the RGB lighting, as the one part of it is very minor on the mouse, and rests directly under your palm when you’re using it. I’m not sure who thought it was necessary, but put it in a better spot next time.

Overall, the versatility of the Cooler Master MM731 is it’s biggest selling point, with the battery life not far behind. It’s clicky, it feels good, and sits at a decent price. There are some issues with the MasterPlus+ software that need to be ironed out – mine still won’t update, and if you’re a lefty you’re out of luck. But for those looking for a new gaming mouse, the MM731 is a pretty good buy.

David Burdette is a gamer/writer/content creator from TN and Lead Editor for Gaming Trend. He loves Playstation, Star Wars, Marvel, and many other fandoms. He also plays way too much Call Of Duty. You can chat with him on Twitter @SplitEnd89.
Related Articles: Cooler Master MM731 Gaming Mouse
Share
Tweet
Share
Submit