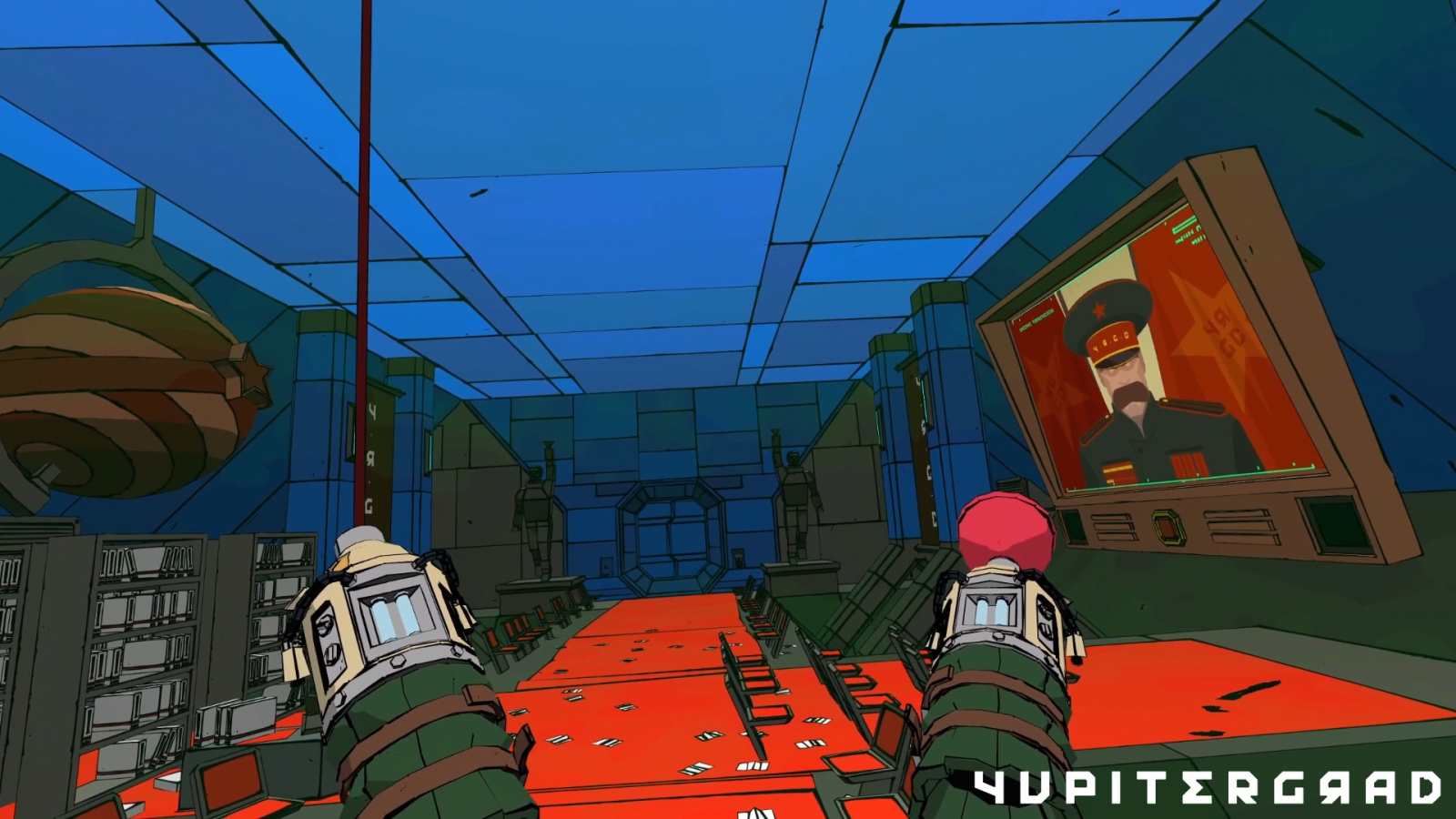 Ever wonder how Spider-Man avoids getting motion sick while web swinging? Turns out, he doesn’t! Yupitergrad is a VR platformer that sees you donning the… suction glove thingies of a Russian Cosmonaut in what’s very clearly a cold war era parody as you swing around to fix the titular Yupitergrad station. After a tutorial and a short six year space rocket ride, you’re dumped in the station to flip some switches and get stuff working.

With Yupitergrad being exclusively a VR game, I used an Oculus Rift headset along with the touch controllers, as you’ll need some form of motion tracked controllers. Each of your hands is stuffed inside the aforementioned suction grapple gloves which are also equipped with some small air jets. Pressing the rear trigger with your index finger will fire off a plunger and stick to any blue surface, you can then pull back on the stick to reel in your line or do the opposite if you need more slack. If you need a little extra push while you’re swinging or just need to propel yourself on the ground or in water, you can hold the side triggers to fire off the air jets in the opposite direction you’re pointing for a short boost. It’s simple to grasp, but very, very difficult to master. Make no mistake: the station is incredibly unsafe. You’ll need to maneuver around holes in the floor and walls, pillars of fire, deadly fans, and much more in each level.

While the game is divided into levels, you wouldn’t know that without looking at the menu. Aside from the initial loading screen, there’s no wait time between challenges or even sections of the station. Of course, there are a few moments spent waiting for a door to open, but other than that this feature keeps the flow and your movement going at full tilt. The game is only about an hour and a half to two hours long, but that includes a metric ton of deaths and short breaks because of two factors: this game is very difficult, and will definitely make you very nauseous.

I’m not as susceptible to VR sickness as many people, but it can still force me to stop a game occasionally. While I may feel perfectly comfortable playing Astro Bot Rescue Mission or Moss, in something with more movement like Star Wars: Squadrons I can only last a level or two before tapping out. That being said, only a few minutes playing Yupitergrad will make me sick to my stomach. I’ve tried holding on for 20 minutes of active play, but after that I’ll need to lay down for half an hour. There is a “comfort mode” you can activate, but this simply adds speed lines around you when moving quickly and doesn’t help my comfort in the slightest. Being completely honest, I got to the last three or so levels and just couldn’t bring myself to finish it. I got stuck on a section where I needed to launch myself very high in the air, and try as I might I couldn’t overcome the gap, neither in practice nor with my lunch intact. As fun as this game is, I just don’t want to puke. 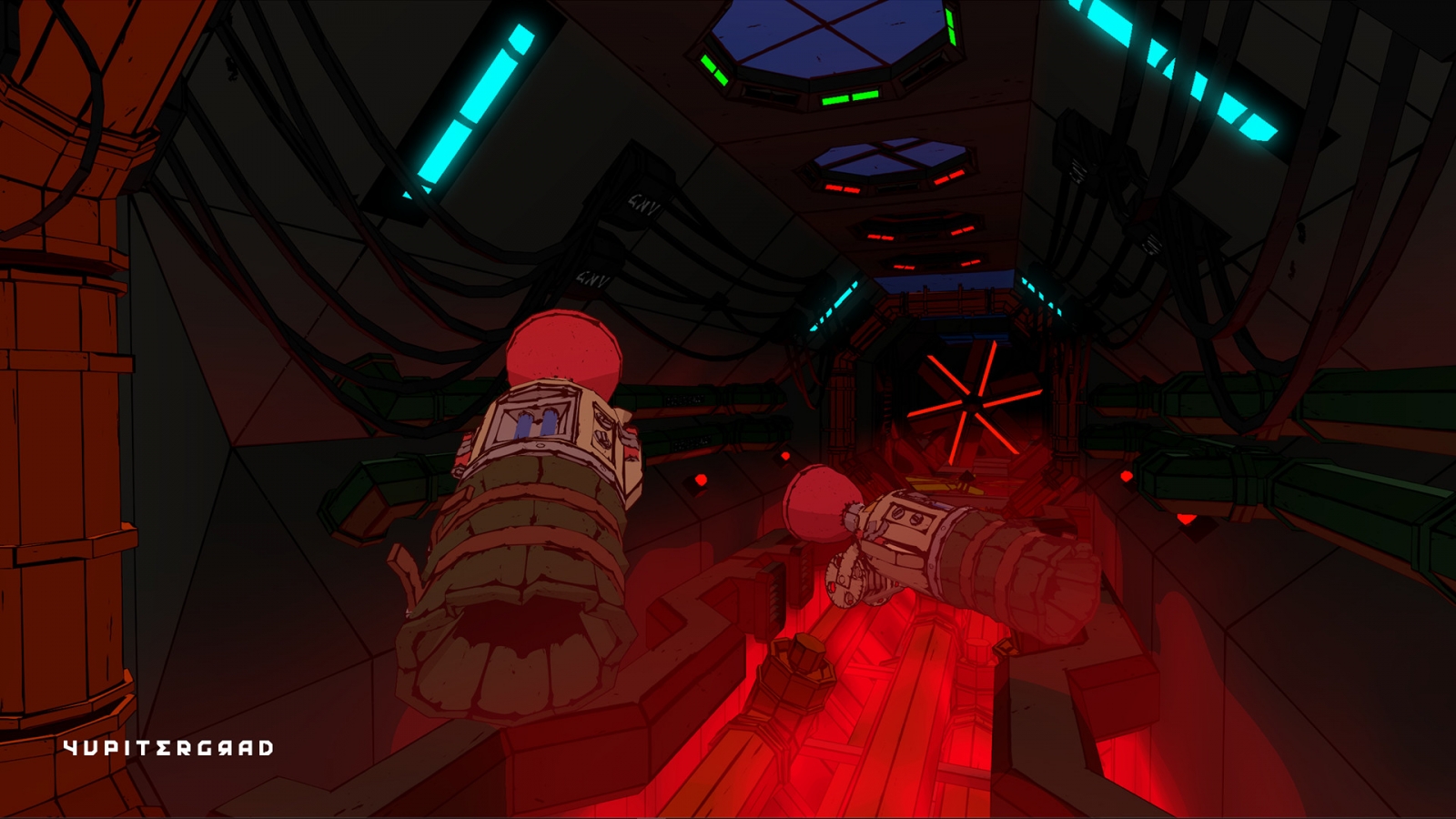 Before you start feeling sick, you’ll feel the pure joy of moving around in this game. Once you know what you’re doing in a section you can almost start swinging around like it’s nothing, maneuvering around corners with the grace of an acrobat. Almost is a bit of a sticking point here, there’s no indication of where you’re aiming which makes some of the sections that require precise timing and swinging angles much more difficult than they needed to be. As you progress in the game, both the blue tiles you can grapple on and the amount of time you can hang on them will decrease which makes it all the more frustrating when your flow is broken by a suction just barely not hitting the mark. Since these grapple guns already look shoddy enough, taping a laser pointer to them so you have a general idea of your aim would have been appreciated.

As a consequence of dying due to slightly misplaced aim, you’ll be hearing repeated jokes quite frequently. Most of the voice work is done by the station’s AI, played by a woman who sounds more generally Eastern European than specifically Russian. To put it bluntly, her delivery is awful, and the jokes aren’t very good either. Sure, the joke of “haha comunist russia blatantly bad” is funny the first few times, but it wears itself thin before the tutorial is even over. You can turn off the voices, but they do provide some crucial information very rarely so you need to at least keep the subtitles on. 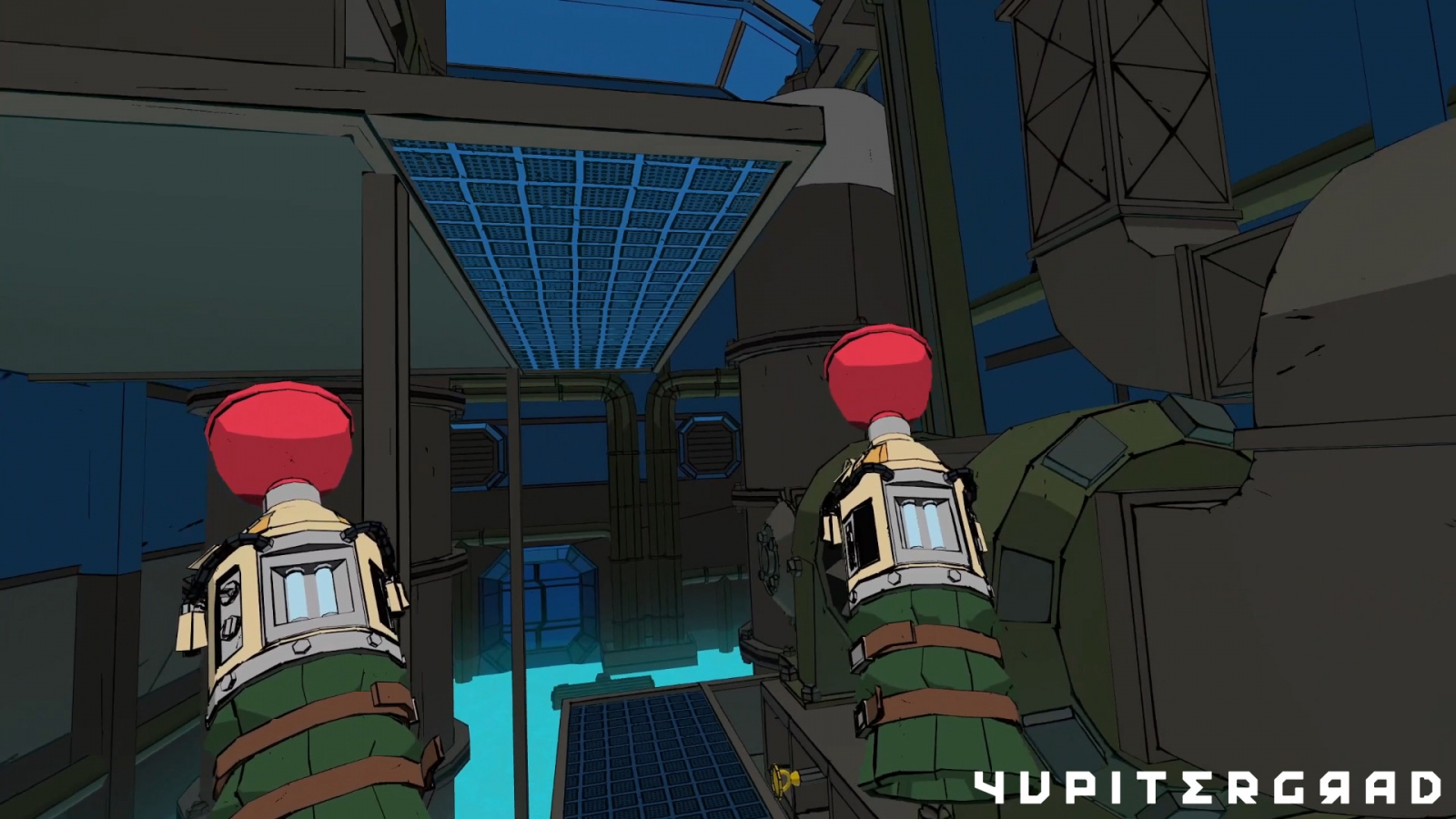 To end on a positive note, Yupitergrad has a very nice, cartoony art style that relies heavily on basic colors to communicate information. Even if your HMD’s lenses are getting fogged up by sweat, you can still tell exactly what you need to do just by the colors alone. This also avoids the uncanny valley completely, since you never see or interact directly with another human. On top of being nice to look at, it should stand the test of time and help those with less powerful hardware run the game, even if their bodies won’t let them play for long.

Yupitergrad is an intensely fun, if too difficult, Russian Spider-Man simulator that will have you speedily swinging through obstacles with grace. That is, if you can get past the nauseating motion sickness.

David is the kind of person to wear his heart on his sleeve. He can find positives in anything, like this is a person who loved Star Fox Zero to death. You’ll see him playing all kinds of games: AAAs, Indies, game jam games, games of all genres, and writing about them! Here. On this website. When not writing or playing games, you can find David making music, games, or enjoying a good book. David’s favorite games include NieR: Automata, Mother 3, and Gravity Rush.
Related Articles: Indies, Yupitergrad
Share
Tweet
Share
Submit