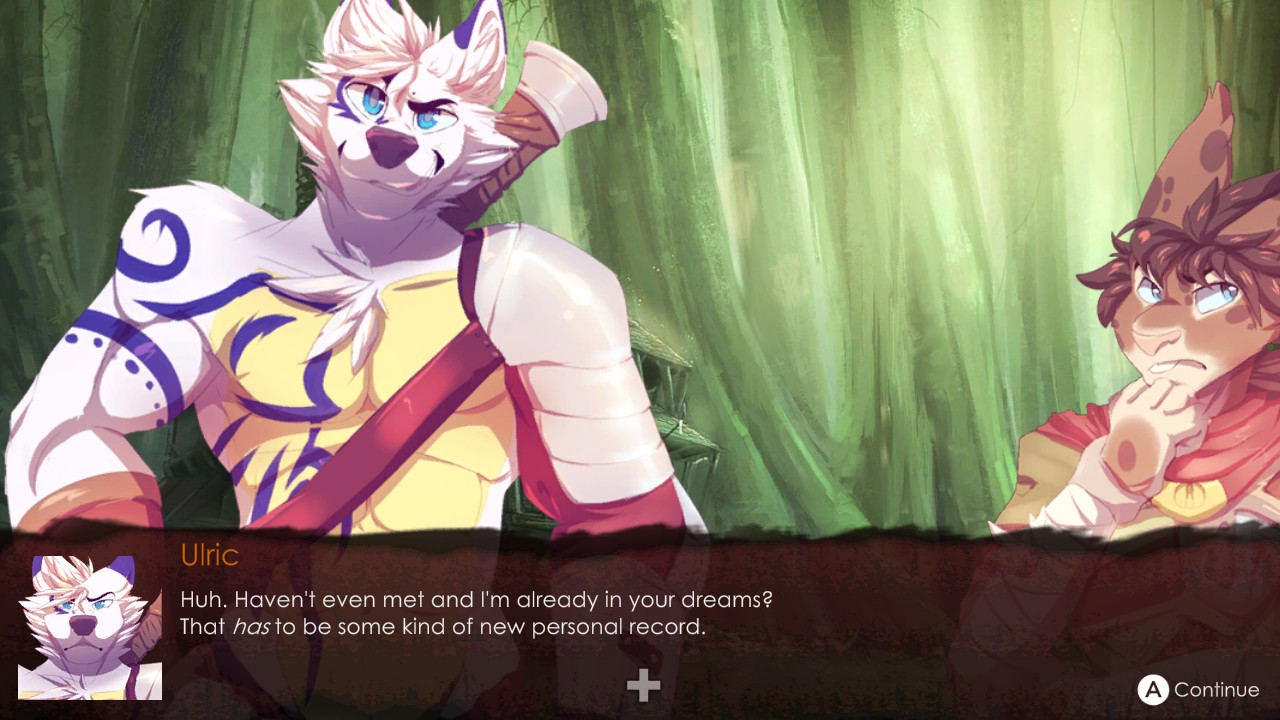 I think I’ve gotten comfortable with saying that while I’m not a furry, I do appreciate anthropomorphic art and stories. (Trust me, it was probably Beastars.) A while ago, my buddy reviewed Major\Minor for Gaming Trend, and while I was a bit dissuaded from picking that visual novel up, I was a bit intrigued at the developer’s next game, Winds of Change. The game looked impressive and had a decision tree that didn’t involve only two choices. After spending some time with this, I have to say: this is probably one of the best western visual novels I’ve played in a while! 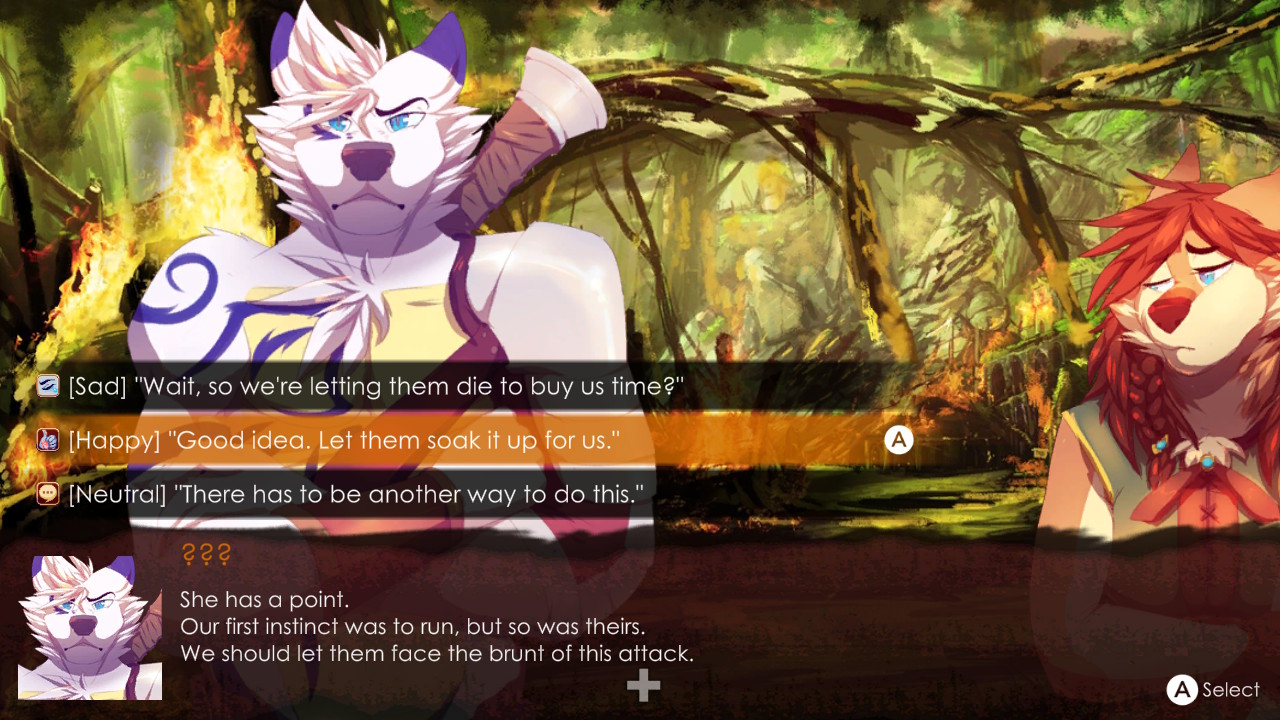 In Winds of Change, the cast is in the world of Alestia. You are a Seer of Valinorth, a location that is horrifyingly destroyed by the evil forces of the Triumvirate. Well, not yet, since you’ve only had a vision; however, you’ll have to work together with your comrades in order to make sure this fate doesn’t befall your hometown. Luckily, you have The Blade of Exodus which can make quick work of your enemies… if you can train yourself to use it. You’ll have to make sure that your decisions will bring peace to the land, because you can be overwhelmed with corruption.

Winds of Change has a unique decision system; while you have purity and corruption (which will change based on choices you make during the game), you also have a books meter which you can increase by reading different tomes scattered throughout the land.  Doing this can also unlock some choices if you read certain books. While the game is normally in a visual novel dialogue tree, some sections will switch to a point-and-click interface where you can interact with objects and locations. There’s also a map where you can change where you currently are in the game, though you’ll follow a linear progression for most of the game. 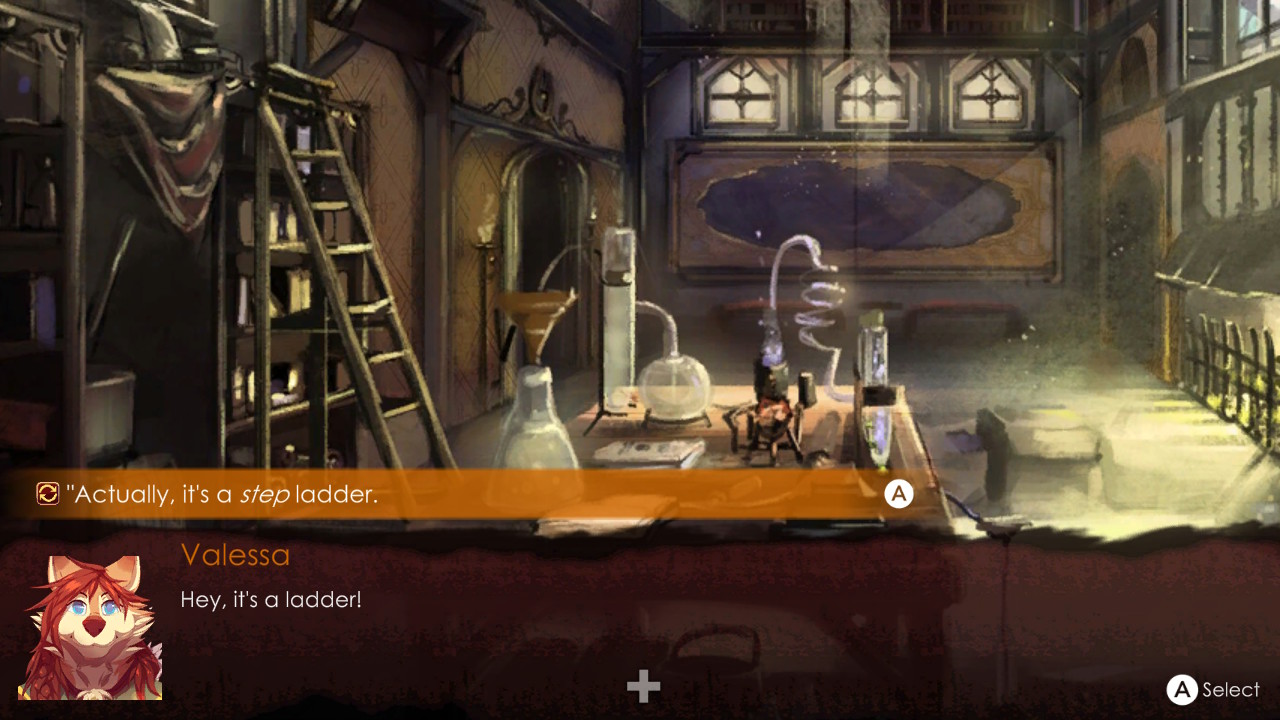 In addition, you can speak with your party members and change their affinity with you; this game allows you to romance all supporting characters in your party, so if you’d like to pursue them, you may. I also liked how you could make this relationship platonic, which still gives you beneficial scenes with the supporting cast. The best part of Winds of Change is the Party Banter feature, which will allow different characters to talk with each other, with some scenes being unlocked based on what you chose previously. You can also view scenes that happened to other characters in a parallel chronicle. These are nifty little features that are completely optional, and I’m glad that the developer took some time to flesh out the world of Alestia in these entertaining conversations. It’s an engrossing system that encourages repeat playthroughs, and I enjoyed my time with it.

The presentation of the game is pretty good overall. I’m a big fan of the character sprites here, and there are multiple expressions for each. There’s really something for everyone here, from the cautious sidekick Valessa to the strong Ulric. The voice acting here is a bit of a minor issue, with some characters being excellently cast. Fortaime is a pretty fun character with his lighthearted personality, but Valessa seems a bit shaky with her voice lines. Thankfully, not every performance is inconsistent, but there are some standouts and some characters that have less than stellar voice lines. 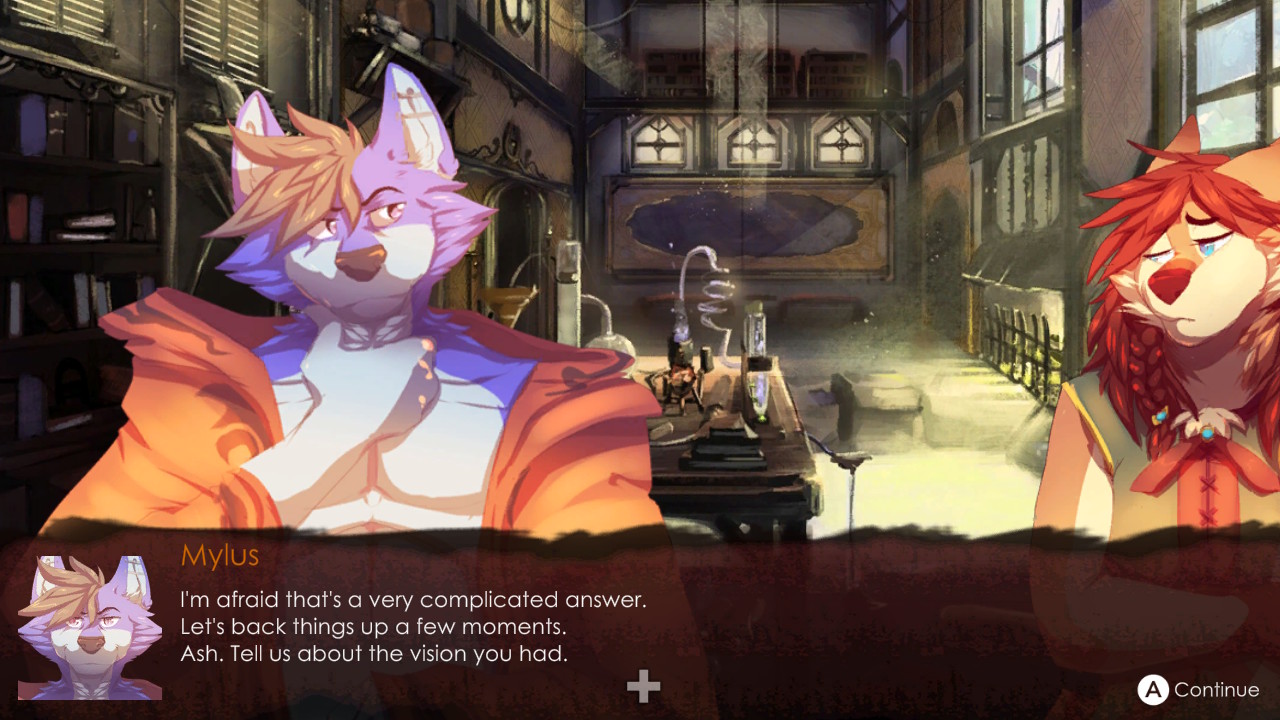 I think the biggest problem with Winds of Change is how indulgent it can be with its lore. While I do like the worldbuilding that different characters will divulge during conversations, almost all of the books are a bit of a drag, since they’re usually minutes long and aren’t very interesting. A few books do reveal some important details about plot-relevant objects and events, but they’re bogged down by text-only lectures. I wish that they were shortened through summarized passages, but as they’re easily skippable, it’s a slight quibble.

As furry visual novels go, Winds of Change is in the upper echelon. Leaps and bounds from its predecessor, this follow-up boasts a charming cast of characters, wonderful character models, and some great storytelling. If you want a fantasy tail… erm, tale to sink your teeth into, this is one you should check out.

Elisha Deogracias is an aspiring accountant by day, freelance writer by night. Before writing for Gaming Trend, he had a small gig on the now defunct Examiner. When not being a third wheel with his best friends on dates or yearning for some closure on Pushing Daisies, he's busy catching up on shonen manga and wacky rhythm games. Mains R.O.B. in Smash. Still doesn't know if he's a kid or a squid.
Related Articles: Indies, Winds of Change
Share
Tweet
Share
Submit