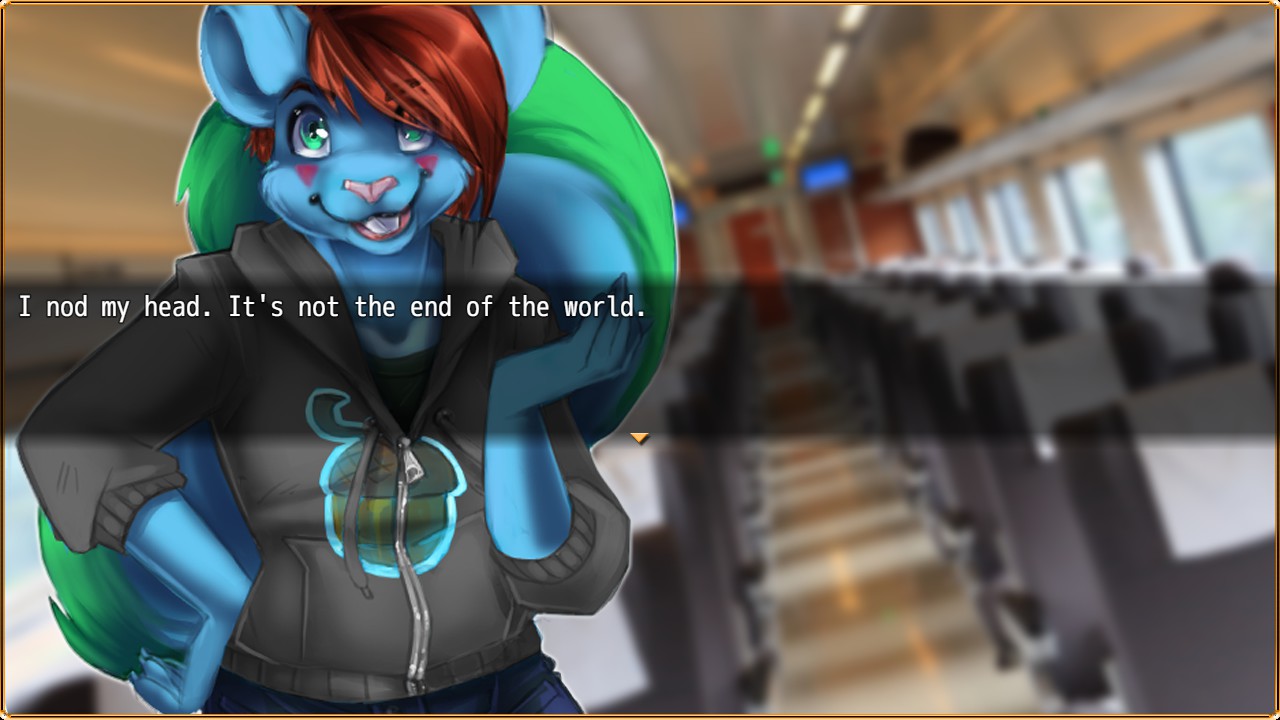 Visual Novels have been around in some form for decades. Arguably, the visual novel could be the video game successor of the “choose your own adventure book.” If done properly, the visual novel can be a great way to immerse someone in a new world full of exciting characters, thrilling narratives and perhaps the most important thing: choices. These choices create different paths for the stories and allow the players to explore the world at their own pace. But what happens if the visual novel fails to captivate the player or offer these choices?

Major\Minor, developed and published by Tall Tail Studios, is a visual novel created by and for members of the furry fandom. For those unaware, “furries” are anthropomorphic beings; that is human-like with animal features, such as dog ears, snouts, and even tails. Not long ago, I was heavily involved in the furry community. There aren’t many games with characters created by members of the furry community, so I was interested to try this out. The characters, or “fursonas” made by members of the community varied on a unique blend of style and breed.

And that is exactly what we get with the case of “Major\Minor”: a unique breed of colorful characters created by members of the furry fandom. Since the characters could be human and the story would barely be changed (they mentioned the word “paws” a few times), choosing to use furries is strictly a stylistic choice.

There’s a very important element you need to take advantage of with your colorful cast of characters in a visual novel: the visual aspect. While there are several characters to interact with, each of them have, at most, two still images. The first of these images is reserved for when your character meets the other characters and is often only used once. The second image, also the same images used for the dialog boxes, is used every time the character is in the scene. These images do not change. They do not blink, and their mouth stays in its same position. Their text may show that they are angry, but their faces makes them look pawsitively ecstatic.

There are very few instances where this trend is broken, but these feel far and few in between. In one of those scenes, a girl begins to cry, and tears appear on her face. For a moment, I thought this game was going to go beyond the static image for the rest of its characters. It didn’t.

So, the visual aspect falls flat, but how does the novel part hold up? Unfortunately, trudging through the story can sometimes feel like a chore to reach the next plot point.

Without revealing too much, the story is revolves around you, the player, as you get caught up in a “tail” of mysterious midnight murders and another world. From the very beginning, you are told that you are important and have a great power within you. It would be nice if this fact was shown, rather than being constantly shoved down my throat without merit.

Your character, who you name and are expected to identify with, begins their journey on a train to Akihabara in Tokyo. They’ve won a trip to japan to be a part of a tour with the famous Pop Idol, Klace (who may be named after the head creator of the game). Despite this, your character still complains about his “new power to change destiny,” saying that if it were up to him, he’d be living a life of luxury. This is an attempt to make your character feel relatable, but this approach doesn’t work, given that the character is on his way to a dream trip to Japan while you, the player, are probably just sitting at home.

This “attempting to make your character relatable” is the first example in a large chain of characters falling flat due to their dialogue or the choices you make with them. While there are plenty of characters in Major/Minor, I had a hard time getting attached to any of them due to how two-dimensional most of them feel. You had the “jerk busybody,” the “tough security guard,” the “strong but soft spoken type,” the “mysterious otherworldly figure” and the “politician with clearly devious stances.” While some of these characters break out of their shell, it’s far too common for them to stay in it and behave almost exactly how you expect that character archetype to behave. On the other side, on the rare occasion that a character takes an unexpected twist, the change feels unnatural.

The story, unfortunately, does not feel well-rounded either. There are two worlds with two stories happening side-by-side. On Earth, you deal with the tragic murder of a beloved character. On Terra, the alternate world, the story centers on plot to overthrow the king, but also to oust the guy that wants to overthrow the king. The only link between these worlds are you and a small handful of key characters. However, you cannot be in two places at one time.

This is where the game hinders itself the most. To show you what is happening in the other world, you are given scenes with characters you do not control. To create context for some of these scenes, you are given flashbacks at random points during your adventure. These flashbacks ruin any hope for there being a dramatic reveal of a villain or a motive by either being placed too early, or being completely unnecessary. This being said, you are told, not challenged to figure out, who the culprit of the midnight murders is early on, with no built up suspense or intrigue.

The farther you go into the narrative, the more complicated it attempts to be. They play along with the idea that there are two worlds, why there are two worlds and what the characters are doing about these two worlds. In the last half of the game, you are given pieces of the puzzle from both sides, and you are only along for the ride. In a way, this feels like a chess game where both players are playing checkers.

Choices are one of the forces that drive a visual novel. If you make a “wrong choice,” there will be consequences. You can only see the “true ending” if you follow the string of correct choices. Major\Minor, however, does not seem to have many consequences, despite it stating into redundancy that “your actions will have consequences.”

Your choices can lead you down several different paths, but they all end at the same destination. While the game likes to tell you that there are consequences for your actions , there aren’t, and you aren’t encouraged to make your own choices.

Each time you save, you are given a few indicators. There are six characters that have “affection points” next to their names. If you have one high enough, you’ll get extra dialogue for them at later points in the story. This has you loading previous saves if your affections points with the characters are ever lowered and has you focus on these six characters specifically. What may be most damning, however, is the “True Ending Flags” counter.

You get “True Ending Flags” for making the “correct” choices. This means if you make a choice and you hear a sound toggle, you could be on your way to the true ending, what everyone strives for when they play a visual novel. By having these stats visible, you are discouraging the player from making their own choices, and instead having them follow a guideline to get the best ending.

As I stated before, all your choices do is take you down different paths towards the same destination. You cannot end the game prematurely, you cannot be one of the victims of the midnight murders, you always end at the same point with two choices. If you have accumulated 10 or more True Ending Flags during any of your playthroughs, you will be given the choice to choose the true ending. That’s right, you choose it at the end. It doesn’t feel like you’ve earned it, because earning these true ending flags feels, often, random.

For both endings, any choice you made is retconned. When I initially played, I set up a character to be with someone. During the ending, however, the game had a scene where the other choice was favored for that character. Why would I go through an entire subplot only to have it taken away from me at the very end of the game? What was the point of it all if the ending was going to be the same?

Another negative point I can’t neglect mentioning is the lack of being able to save whenever you’d like. You aren’t even given the option to save before every choice, but rather at predetermined points in the game . Saving at anytime in a visual novel is a quality of life feature that has existed for years, and is basically a requirement at this point. To see alternate decisions, you’ll often have to trudge through text that could be shortened or get to the point more quickly.

But, there is another thing I’d like to point out about this game. On Steam, it’s said to feature:

However, some of these are flat-out lies. This Visual Novel can be fully completed in 8 hours, which is much less than an entire novel. There aren’t 30 characters, the affection system is anything but “in-depth”, and I did not see an SMS System available anywhere. However, the game technically did have several choices leading to technically different experiences and multiple (two) endings.

If there were something I’d have to give Major\Minor more credit for, its music did help set the tone of the scenes. When the characters are fearing for their lives, the music picks up and sounded almost similar to what you’d hear in a Trauma Center game. However, this is a small golden hair in a needle stack of poor decisions.

Major\Minor is $19.99 on Steam, but that price is steep for the content you are getting and the quality of the product. Especially if the game isn’t completely delivering what it is advertising.

MajorMinor is simply an inadequate visual novel. Its inspirations are present, but the muddled story, flat characters and non-consequential choices drown out any good narrative it is trying to represent. It is pawsitively not worth your time or money.

Sean Anthony likes to combine two of his passions: gaming and writing. Gaming has been a huge part of his life ever since he played his first game as a child, Kirby's Adventure. He aspires to have his name attached to an article that makes the whole world go, "Huh, that's neat, I guess."
Related Articles: Major \ Minor
Share
Tweet
Share
Submit