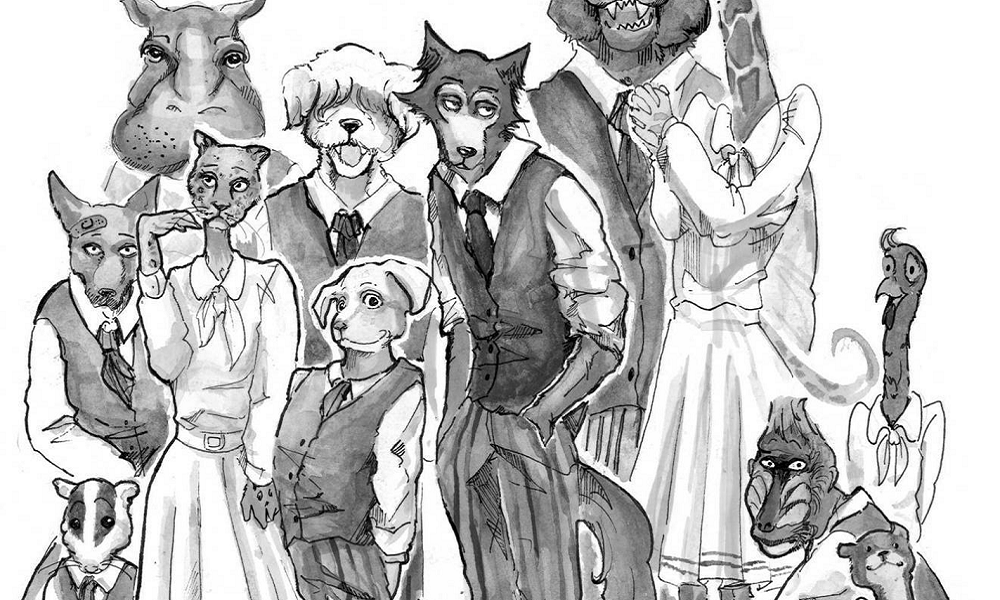 Let’s get one thing straight: Zootopia awakened something in a lot of people. While its setting and plot could open the way for more serious concepts, the Disney branding turned a gritty film noir into something more lighthearted. Fast forward a little later and we have Beastars, a social critique about class division, violence and even some relational tension masquerading as a teen drama. It’s not for everyone, but this series is an entertaining, if heavy, read featuring all sorts of anthropomorphic antics. 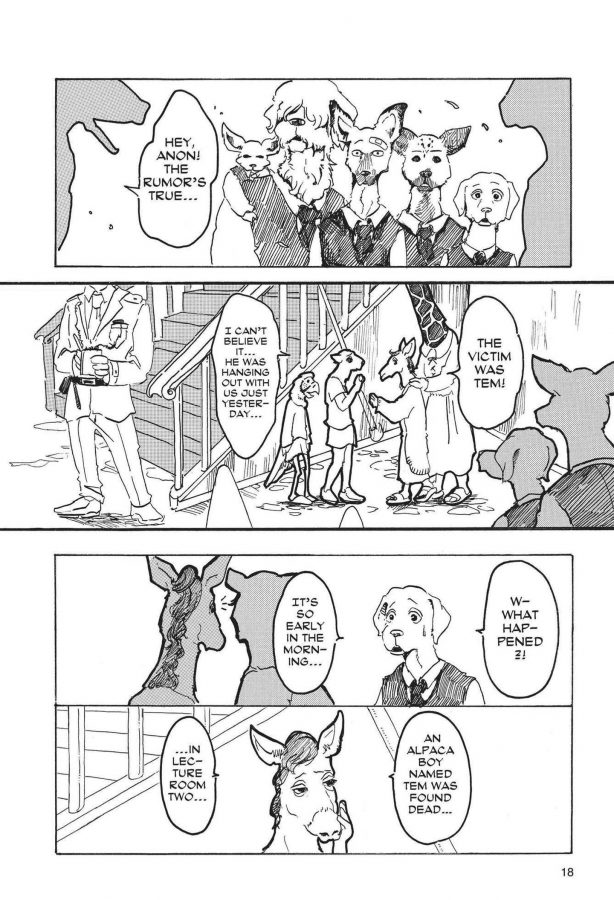 Beastars is set in the fictional Cherrytone Academy, where carnivores and herbivores study in harmony. One night, an alpaca named Tem is murdered by a carnivore, and all signs point to protagonist Legoshi. A grey wolf with a penchant for violence, he’s the main suspect in the murder, and must clear his name while trying to continue his school life. As someone in the drama club, he also gets the attention of the leader, Louis, a deer that has some ulterior motives in their business relationship. It’s obvious that Louis is taking advantage of Legoshi’s vicious demeanor to act as a bodyguard, but what else is planned remains to be unseen for the moment.

There’s more than meets the eye as Legoshi is also a kind and gentle giant who simultaneously must wrestle with his inner carnal instincts. This struggle culminates as he encounters Haru, a bunny with a promiscuous reputation, during a stakeout. While pursuing her, Legoshi awakens a latent desire to kill her; what’s even more surprising is that she willingly complies. However, the duo snap to their senses, creating a surprising spark and tension between the two groups of animals. It’s a continuing tale of intrigue, mystery, and even violence. Oddly enough, I love Legoshi’s character, as he’s a loveable wolf that is misunderstood. He feels a lot like the main protagonist of Komi Can’t Communicate, where most of the problems stem from his shyness and intimidating presence. The other characters fuel the tension as well, from the dastardly Louis to minor characters such as the mongoose Kai who wants nothing but to get back in the actor pool for the drama club. 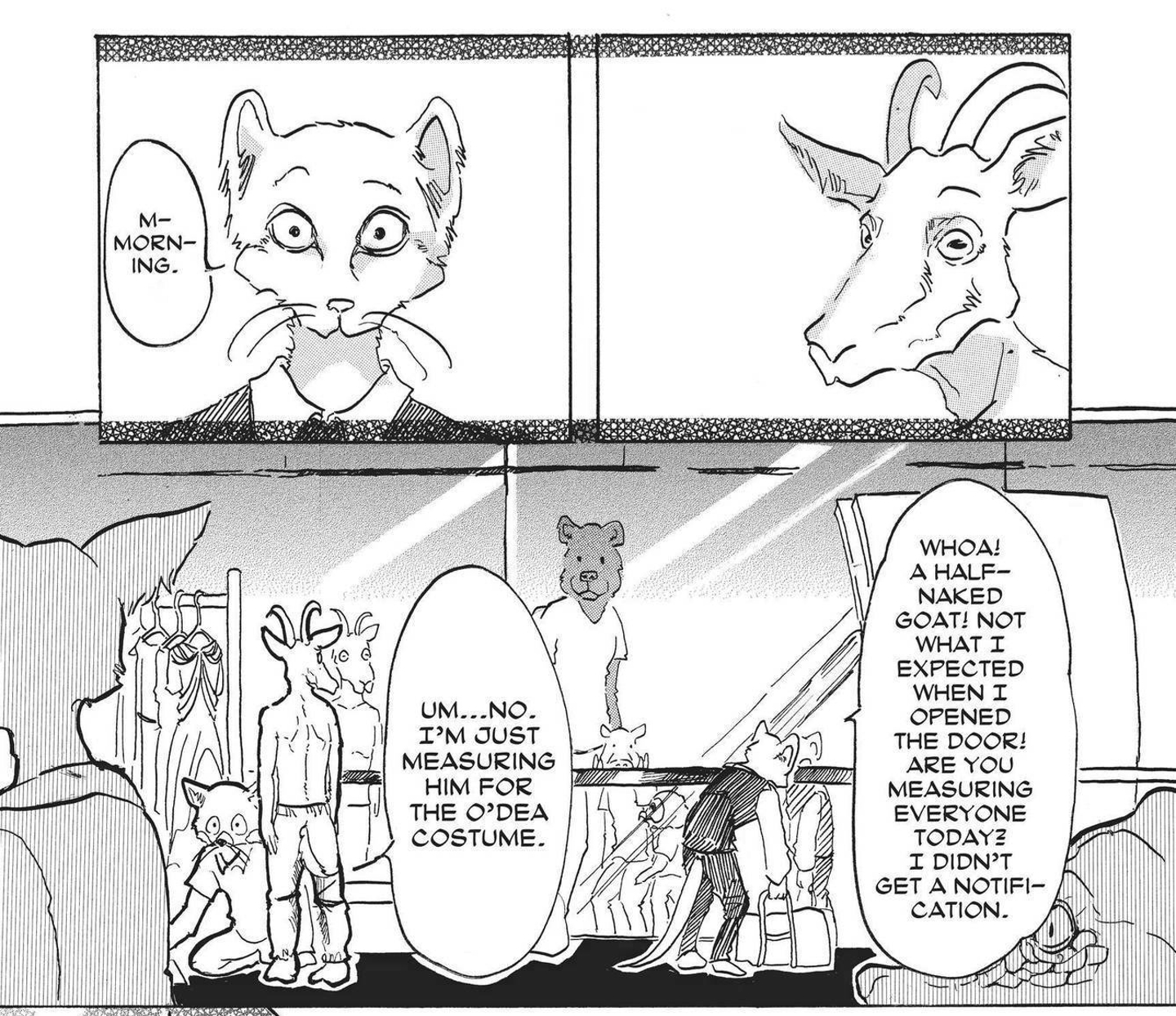 Put simply, Beastars is a series that will instantly appeal to people with a… certain set of sensibilities. This is a series that’s rated 16+, and while there hasn’t been anything super explicit just yet, the themes explored within this volume justify the rating. For example, while Zootopia would have explained the difference of carnivore instincts as prejudice against them, Beastars goes with the implication that many carnivores do have the innate desire to kill their classmates, but need to exercise caution in order to prevent this from happening. 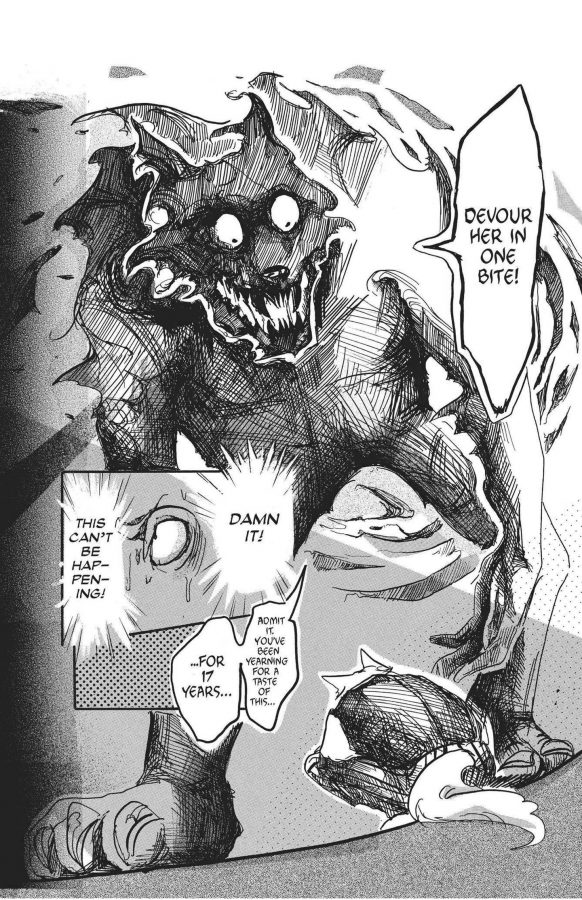 The series even goes so far as to explain what the animals eat: herbivores get vegetarian items while carnivores get some sort of synthetic meat substance that isn’t derived from animals. Racism and classism is present too, as a lot of tension from the initial murder causes both groups to dissociate from each other. It’s a strangely realistic depiction of the inevitability of what happens when you place a carnivore and herbivore together. The whole premise seems grim, which also makes the lighthearted elements stick out like a sore thumb. Whether it meshes well or clashes too much is yet to be seen, but again, it’s not for everyone.

Similarly, the art style is gritty, with a rough sketch style mixed with some more realistic depictions when the chapters get more serious. It’s something that I’m still trying to get used to, and I’d rather it stick to one style rather than go all over the place, but it does complement how bizarre the series can get at times. Overall, I’m really enjoying the series and can’t wait to read the next volume.

While not for everyone, Beastars is a gritty take on the anthropomorphic tale. It has romantic intrigue, some great characterization, and the right amount of violence to entertain older audiences.

Elisha Deogracias is an aspiring accountant by day, freelance writer by night. Before writing for Gaming Trend, he had a small gig on the now defunct Examiner. When not being a third wheel with his best friends on dates or yearning for some closure on Pushing Daisies, he's busy catching up on shonen manga and wacky rhythm games. Mains R.O.B. in Smash. Still doesn't know if he's a kid or a squid.
Related Articles: Beastars Volume 1, Beyond the Page
Share
Tweet
Share
Submit