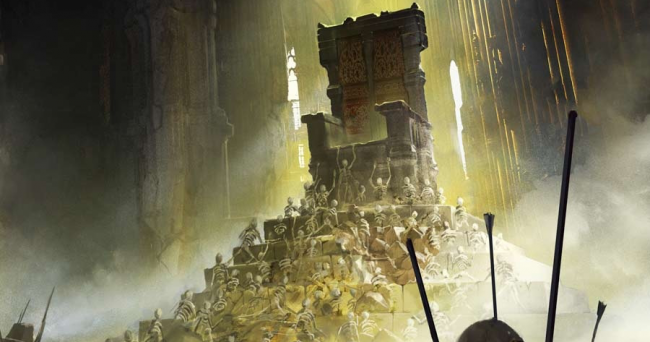 Religion has always had a troubled presentation in roleplaying games. Faith is one of the deepest mysteries of humanity and roleplaying is one of the best avenues of self exploration. Gods are by no means absent from games, especially given the cultures that inspire them. But sadly these representations are too simplistic for us to approach the key issues at play. They leave out how humanity plays into faith because in those worlds we cannot experience doubt. The gods are facts and facts that do not leave room for interpretation. The gods of 40k and Faerun are facts. They enact their will directly. We cannot question their morality or even their existence, and so we cannot question ourselves.

Godbound, the latest release by Sine Nomine Publishing, takes a fresh step forward. Godbound presents religious deities with a never before seen twist: rather than the moralistic omnipotent beings of Dungeons and Dragons or the eternal aggregates of fear of Warhammer, God bound’s deities are man-made. Players can explore faith by examining humanity’s representation of gods, which presents a more nuanced series of moral questions than encountering gods of literal good or evil. Kevin Crawford, the creator of Godbound, was kind enough to give some of his thoughts on religion, gaming, and design.

Your game can be about the intricacies of faith and belief or an angel woman piloting a laser spewing mech, or both. That’s the beautiful thing about this hobby.

As he describes it himself “[f]or Godbound, the moral question essentially boils down to a dispute between revealed morality and reasoned morality, and where society is to draw the foundations of its conception of right and wrong. Do you plant your beliefs in a revealed code, one which might be interpreted by reason but which fundamentally cannot be contradicted by human rationality? Or are your moral beliefs contingent on the approval of reason and human experience, beliefs that are correct because they are rational, and not because God handed them to you on Mt. Sinai?”

“I wanted to make a game where you could play an honest, straight-up demigod in the classic fantasy mold, one that would support not just immediate deeds of divine might but the kind of changes and miracles that a deity might expect to throw around. I wanted a game that supported the shaping of cultures and communities to fit a demigod’s idea of what was correct, and one that provided some concrete guidelines and structure to support that sort of thing in play. On the other hand, I also wanted to explore the question of morality’s foundations, and where a PC is supposed to go for a moral rule when there’s no obvious external moral code being imposed on them.”

The struggle with an external moral code helps define our struggle with religion. Is there something above us that wants us to act a certain way or are we self-imposing a series of rules along some interpretation of morality? With questions as difficult as these, Kevin Crawford did not want to force them on players. We must remember that personal agency is the most important element in our games. The chaos gods of 40k are facts of existence. They are primal fears of all beings that can never be exterminated. While the source of those fears may always exist, we can alleviate them and wonder if the struggle is futile; when you create a thousand foot tall corpse monster that represents the inevitability of death some of the subtlety is lost.

Do you get it? Do you get that he’s evil? Because he is evil.

“[T]hese questions needed to be optional because you can’t shove someone into exploring them; they have to come to them through the course of natural choices and considerations, or else they lack the kind of context which makes these conundrums really bite. For example, it’s possible to gain the power to magically forbid your people from even considering murder. Do you do that? If you do it, how do you define murder? If you don’t do it, why not? Is there a better use of your divine resources, and if so, why do you prioritize that? People will engage with these questions when they arise organically through play in a way that just won’t happen if you push a quiz in front of them.”

“If people want to involve themselves more deeply in moral questions, and figure out how to deal with the clashes of immiscible moralities that the Former Empires so abysmally failed to handle, then that’s something they can do. Or they can punch evil angels in the face and rescue the soul of their dead lover from Hell. Either one is okay, and given the way people play games, it’s possible both will crop up in the same game session.”

Of course, you cannot approach topics as sensitive as the basic nature of faith without running certain risks. Godbound kicks off when mankind storms through the Host of Heaven to find the Throne layered in corpses and God having vacated. It is striking imagery, especially to those of faith. I asked him how he thought best to approach these topics.

“I approach them directly. I try to avoid the kind of decorative flag-waving that serves more as a tribal marker than functional fiction, but if a topic requires that you go someplace, you go there. People who don’t want to come along don’t have to.”

We have to remember that this is one among a multitude of viewpoints. I think a being that admits its existence is contrary to life itself like Exalted’s Neverborn present valueless moral questions because their servants are inherently undefendable. But others may be attracted to this metaphor for the unchangeable and the fact that some people will fall to wrongful motivations. Those more religious than I might want to explore a world where gods take a more direct hand.

“I categorically reject the idea that RPGs should attempt to morally improve the players, so there’s really no ‘should’ involved in it…As in Godbound’s case, you can make it so that people can explore these questions and can interrogate their own senses of right and wrong, but trying to explicitly teach them something or convince them of some moral position is to confuse categories. A game is fiction. It can ‘prove’ anything the author wants to prove, granted sufficient rhetoric and a world that obligingly acts the way the author wants it to act.”

Therein lies the real answer, as far as game design is concerned. A game approaches religion like any other concept: by granting its players the freedom to explore it themselves. Imposing on them that “this is Correllon and the followers of Correllon are good, and the opponents are evil” limits their interpretation of the character. It should be the goal of the designer to create white space in which we can explore but leave a framework of questions we want to answer. In Godbound’s case, why was the Throne empty? Was it ever full? Are these gods we made right? Or are they just our interpretation of morality? We can only ever begin to answer these, and therein lies the veracity of the questions.

When asked where he would like to take Sine Nomine in the future, Mr. Crawford had this to say:

“I eventually want to write a game based in Ming China in 1555…I’d like to get out a Proteus Sector supplement for Stars Without Number that explores the consequences of eugenics and what people are supposed to do when there’s a dramatic cognitive gap between different groups of people. I’d like to do a Tudor England alt-history game set in 1555. Next summer should see a revised version of Stars Without Number. Really, the nice thing about doing your own publishing is that you’ll never, ever run out of paying work for as long as you care to hit the keys. I intend to take full advantage of that fact.”