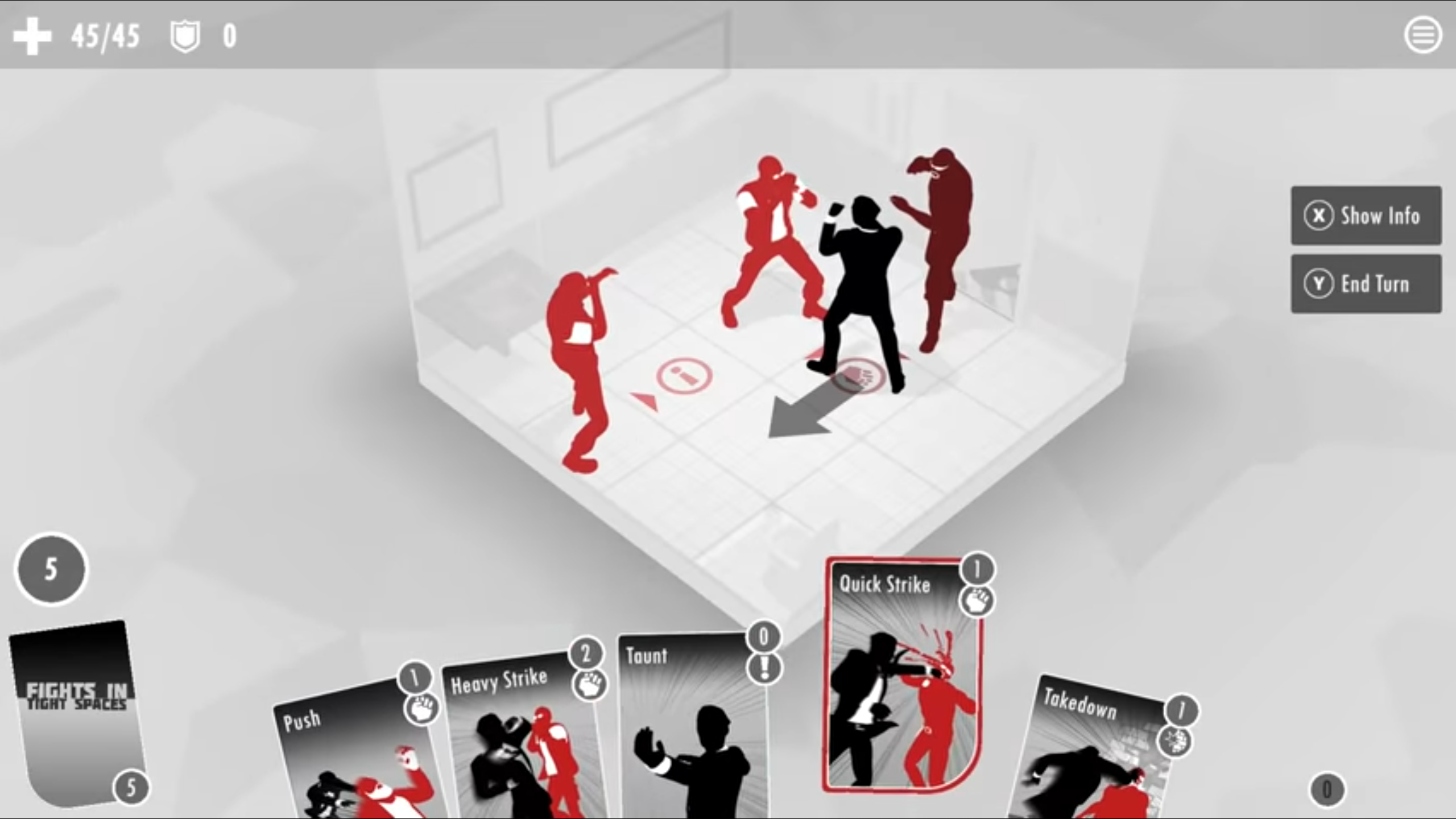 There were several times between first playing Fights in Tight Spaces and writing this piece that I told myself I really need to start writing after this run, only to click ‘New Game’ immediately after failure. This in itself is a testament of how much I enjoyed my time with Fights in Tight Spaces, a roguelike decking-building game from indie developers Ground Shatter. While your mileage with this game might be quite limited for the time being, there is an awesome time to be had for any fan of roguelikes, deck-builders or the John Wick movies.

In Fights in Tight Spaces, you play as a suited and booted close-combat master known only as Agent 11. Each of the five chapters sees you taking down a leader of a different criminal gang, with plenty of fights along the way. The story is nothing more than a framing for the gameplay, but that’s all it needs to be. Each chapter (except the last) will feature unique enemy types and arenas in the flavour of their faction. In the second chapter, for example, you are tasked with taking out a crime gang that has infiltrated the prison system. To succeed you will need to overcome cudgel wielding guards, brutes with hands the size of melons, criminals wearing riot gear, and much more. Similarly, the fights during chapter two take place in prison-themed arenas such as vans, cells, and shower blocks. The variety of both enemies and arenas is fairly decent, but more of both of these wouldn’t go amiss. Each time you begin a new run you’ll be fighting the same enemies in the same arenas in the same order, and while I had a blast playing through them over and over again, there is a danger of the game becoming stale for many players faster than it should. 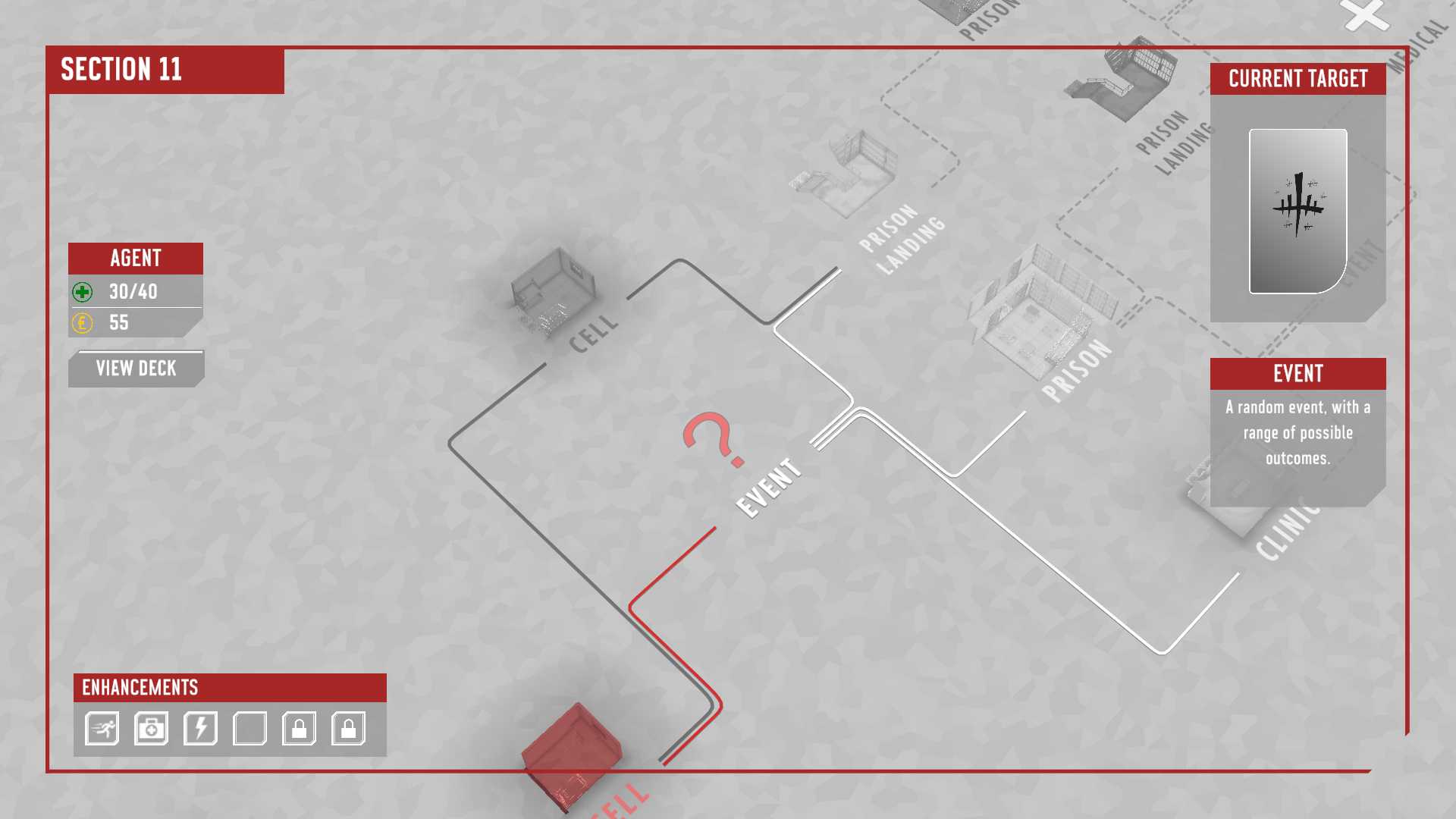 At the beginning of each run you’ll choose one of four base decks, with three of these being unlocked as you play more of the game. Each starter deck is designed around one of the several fighting styles available in the game; Balanced gives you a mix of defensive and offensive cards; Counter Striker offers more defensive and movement options; Aggressive presents an array of high damage cards, and the Trickster deck allows the player to begin with some of the more unique cards that can be found in the game. I found most success when starting with the Balanced deck because, as one might expect, it offers the most flexibility earlier on. That being said, you can truly steamroll the earlier stages with the Aggressive deck once you’re more comfortable with the game, to the point where it might trivialise the early game for some more experienced players.

So what sorts of cards can you expect to find in Fights in Tight Spaces? Well, as one might expect from a game inspired by the martial arts, there are a hell of a lot of punches, kicks, jabs, grapples, and so on in your arsenal. Some cards send you flying across the isometric arenas to deal massive damage, whereas others displace enemies to give you a moment to breathe and plan. Defensive cards might allow you to block a portion of the damage you would otherwise receive on your enemies next turn, while some will make Agent 11 counter all incoming attacks in the following turn. Most enemies deal a ton of damage, which makes positioning even more important than offense. Thankfully, there are plenty of cards that can be used to slip away from enemies or push them away. Make one wrong move, however, and it might cost you the entire run.

Resource management plays an enormous role in Fights in Tight Spaces, and in this case those resources are Momentum and Combo. Each card (except a few free ones) will either cost Momentum or Combo, but let’s discuss Momentum first because it’s the most straightforward of the two. Essentially acting as your Action Points, the player begins each turn with three Momentum by default, with the chance of increasing it later in the run. Momentum is reset at the beginning of each turn, and can’t be banked. Combo, on the other hand, can be banked between turns, is built whenever the player performs an attack, and lost whenever they move. Some cards require a certain Combo level to use, while others deal cumulative damage depending on the amount of Combo the player has banked. Some of the most powerful cards in the game will end the player’s combo streak in order to deal catastrophic damage to the enemy. 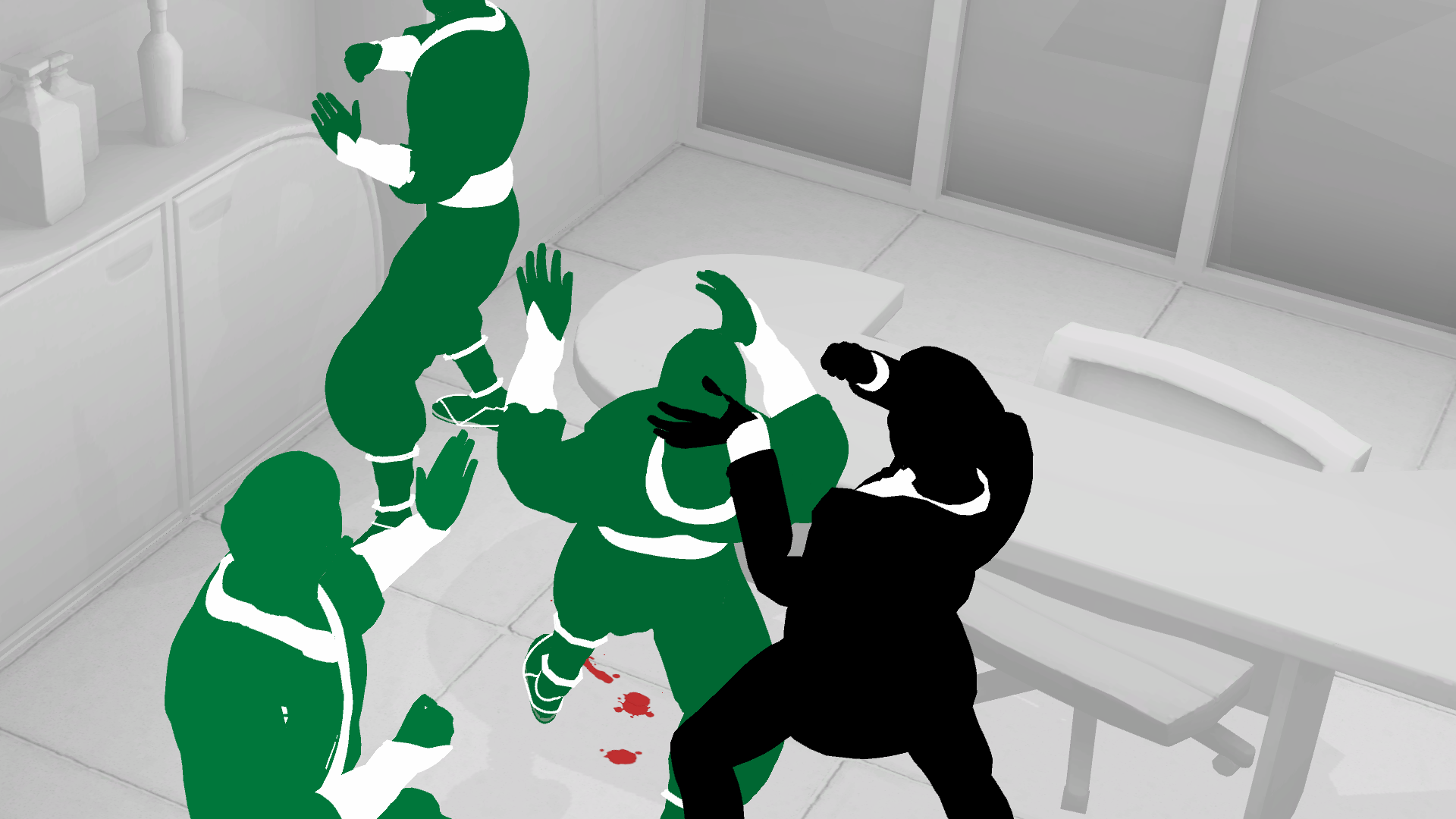 The combination of some truly cool cards as well as a rewarding resource management system make the cardplay in Fights in Tight Spaces a true joy to play. The loop of using Momentum based attacks to build up powerful Combo moves is as close to feeling like Bruce Lee that I’m ever going to get, and it feels great. Indeed, the smooth flow of the cardplay does an amazing job of emulating the fight sequences we’re all familiar with in our favourite action movies. It’s the game’s crowning achievement, and seeing what new combos I could perform with different card combinations made me want to start a fresh run as soon as I was KO’d.

Each time you beat a stage in Fights in Tight Spaces, you will have the option of adding one of three cards to your deck. Although there are a fair few builds to explore with the different types of offensive, defensive, and utility cards available, there is usually a clear choice when it comes to upgrading your deck. Once you have a few defensive, movement and displacement cards, the clear choice is nearly always the card that does the highest amount of damage. It would be nice if the game gave me more of a reason to explore other card combinations. 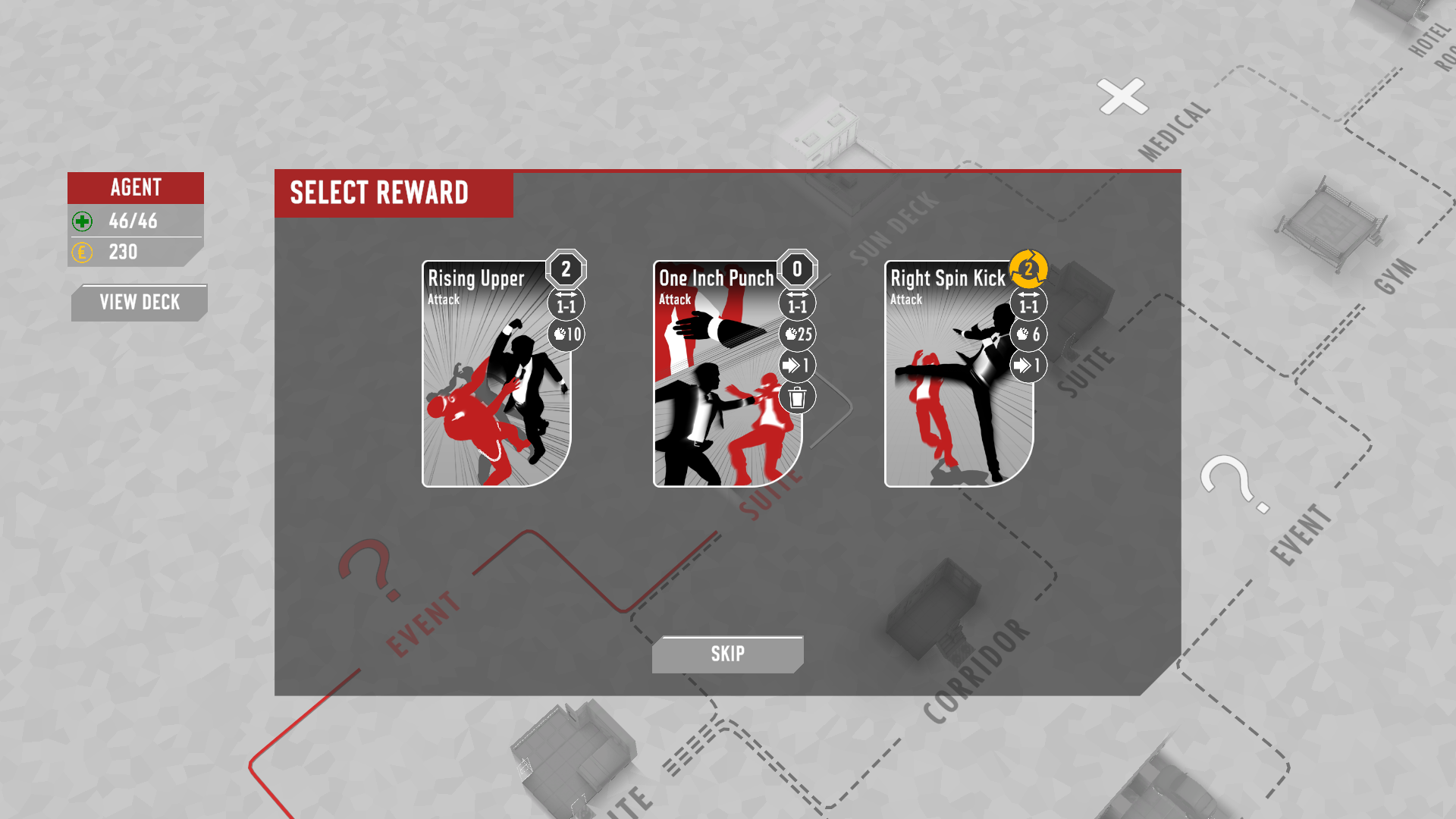 Once you have acquired a card, it can be upgraded at a Gym: a checkpoint of sorts that allows you to spend the currency you have accumulated throughout the run on new cards and the aforementioned upgrades. Currency is earned by doing particularly well in a stage, such as completing it within a certain number of moves or reaching a certain combo level. It’s a great way of rewarding clever gameplay, and as well as being able to spend it at Gyms, you will also be able to spend it at the Medic, who can heal you or even increase your maximum health for the duration of the run. In addition to Gyms and Medics you’ll also see Events, which usually entail you gambling Currency or HP with the chance of doubling your spend or in return for card. I tended to avoid these, because the RNG gods were almost never in my favour.

Before I close off the article, I want to touch on how awesome this game looks and sounds. While the visuals are fairly basic, they absolutely do the job. The whitewashed background is the perfect canvas for splatterings of blood as you make mayhem, and contrasts perfectly with the fully black-suited Agent 11, meaning that he is always the centre of attention during the fights. Each card you play has a pretty well done animation to go along with it, and the sound your character’s foot makes as it comes foot to face with the enemy is over the top in all the right ways, just like the movies. The best thing about this is that after each round you have the option of watching a sped-up replay of the butts you just kicked. It’s super satisfying, especially after a particularly action-packed round. Lastly, while there are only a few tracks at present, the ones that are there truly kiss ass, and act as a perfect accompaniment to while you’re, well, kicking ass. 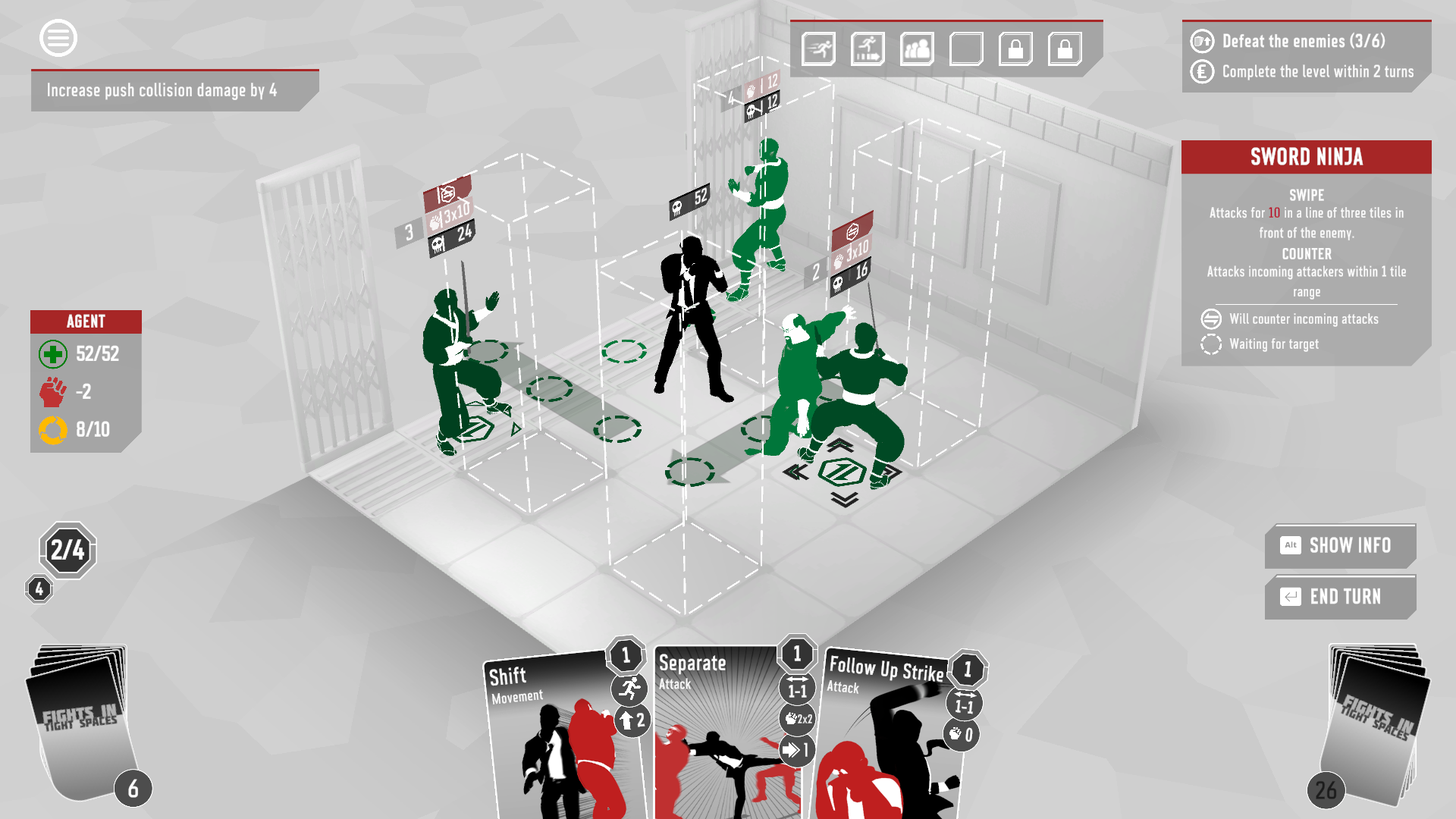 I’m by no means a card game expert, but I’ve played my fair share of Hearthstone and dabbled in a few others. What I can say though is that Fights in Tight Spaces was a truly unique experience for me, and I was pleasantly surprised by how much I enjoyed it. While it may not be as deep as some other card games out there, and the variety of levels and enemies are not as extensive as I would like, I have no concerns about recommending Fights in Tight Spaces to fans of the deck-building genre, or simply those who love a good action movie.

Fights in Tight Spaces is a stylish roguelike deck-builder that uses a clever resource system to back up some truly satisfying cardplay. While the amount of content is fairly light in its current Early Access state, what’s there is fun, entertaining, and polished. It may not be as deep as some other card games out there, but I have no concerns about recommending Fights in Tight Spaces to fans of the deck-building genre, or simply those who love a good action movie.

Kristian (or Kris for short) is a copywriter by day, button presser by night. Based in the UK, Kris loves any game that allows him to swing a sword, fire an arrow, or sling a ball of fire, but ultimately he's not too fussy. On the rare occasion Kris isn't writing or gaming, you'll probably find him in the bath with a good book.
Related Articles: Fights in Tight Spaces, Indies
Share
Tweet
Share
Submit