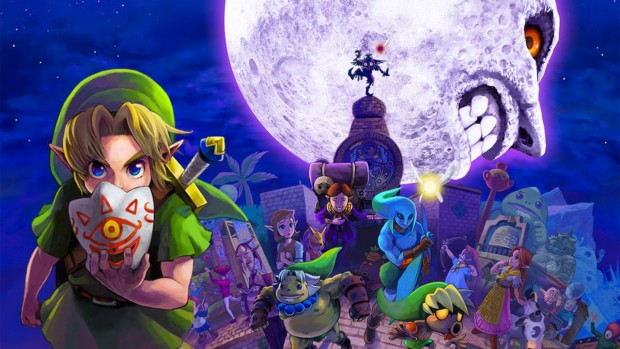 Up until this year, the current console generation has had a slow start. While there have been some impressive titles across all three major platforms, last year’s offerings emphasized a lack of any console-defining must-have titles. By the end of 2014, I was hungry for something special.

This felt like the year that this console generation truly hit its stride. We finally got some heavy hitters in the form of beloved sequels, unique new IPs, and epic 100+ hour adventures. This was the year of the big guns, and has been an incredibly special year for gaming.

Super Mario Maker is one of the best toy boxes that video games have ever seen. The ultimate example of putting full control of a franchise in the hands of the player, it’s amazing to witness some of the intricate and deeply involved stages that gamers have built with the right inspiration. From the absolutely ludicrous to the nearly impossible, there’s something here for gamers of all skill levels to enjoy.

More importantly, though, every nuance of Mario’s many iterations was expertly crafted to make even the most ridiculous of user-created levels feel genuine. Each of Mario’s four backdrops from past adventures feels exactly like it did previously, with the same rules and parameters of each game remaining faithful. Super Mario Maker is a fantastic love letter to 30 excellent years of Mario history and gives players the keys to the Mushroom Kingdom like never before.

I absolutely adore Batman: Arkham City. I consider it to be among the best licensed games of all time and easily one of my favorite titles of the last generation. There’s just so much that Arkham City gets right about being the Batman.

Naturally, Batman: Arkham Knight was my single most anticipated game going into 2015, and while I never felt like it hit the same levels of quality as Arkham City, there’s no denying just how masterful Rocksteady Studios is at creating excellent Batman experiences. Arkham Knight has its fair share of problems – the Batmobile being its biggest – but there’s still plenty that this game absolutely nails.

A compelling story, fantastic voice acting, an abundance of content and excellent combat are just a few of Arkham Knight’s greatest qualities. However, most importantly is just how well the Arkham series continues to make you feel like Batman. There’s a brilliant balance of brute strength, detective puzzle solving, and strategical planning that makes players feel exactly like the Dark Knight.

Arkham Knight may not reach the same heights as Arkham City, but you’d be hard pressed to find another series that captures its source material as well as this one does.

Nintendo has never been a company known for its efforts in online gaming. While the House That Mario Built has always proven themselves experts at crafting multiplayer masterpieces, online gaming has never felt like anything more than an afterthought on Nintendo consoles.

That’s why it was such a delight to see Splatoon not only embrace online gaming, but dive headfirst into it as well. Nintendo’s ink-based splatfest is one of the most original and charming games to ever come out of the shooter genre. Splatoon’s premiere offering, known as Turf War, offers a unique shooting experience, and the fact that the score is not based on kills means that even the most non-combative of players can contribute.

Ultimately, Splatoon is not only one of the freshest multiplayer experiences in a long time, it’s Nintendo’s best new IP in years.

7. Tales from the Borderlands

Time and time again, Telltale Games have proven themselves to be masters of emotional, impactful storytelling. But while The Walking Dead and The Wolf Among Us were established narratives where the plot was already mapped out, it was unclear how Telltale would approach a brand new story told within the action-oriented Borderlands universe. After all, story has always taken a backseat in Gearbox’s popular shoot-and-loot RPG; how could Telltale convince me to suddenly take interest in the happenings on Pandora?

As it turns out, Telltale showed us just how talented they are at pollenating existing franchises to make brand new stories bloom. Familiar Telltale elements, such as quick decision making and lovable characters, melded perfectly with the comedy and harsh backdrop of Borderlands to create some of this year’s most memorable moments. Add in an awesome soundtrack and an incredible voice cast starring the likes of Troy Baker, Patrick Warburton, and Laura Bailey, and you have a truly fantastic game that I never saw coming.

I said it in my review and I’ll say it again: Majora’s Mask is the most underrated Legend of Zelda adventure out there. Boasting an ominous air throughout the entire experience, this is a much darker, more challenging and outright weirder Zelda than any other and creates a mood perfectly befitting its gloomy story.

Perhaps what is most impressive, though, is just how well Majora’s Mask holds up after 15 years. Its Groundhog Day style time traveling mechanics still feel fresh, and with the same three days reoccurring over and over, there’s significant replay value through its Butterfly Effect variations. And for those gamers who found Majora’s Mask too complicated, the game has been made more accessible, from the streamlined Bomber’s Notebook to the more user friendly save system. This is the best way to play a hugely underrated classic.

A Majora’s Mask revisit has been long overdue, but I never thought Nintendo could refine the experience as well as they did. This is still my second favorite Zelda title ever (nothing beats Ocarina of Time), and should not be missed by any Nintendo fan.

5. Ori and the Blind Forest

As a grown man, it’s not often that a video game can bring a tear to my eye, but Ori and the Blind Forest did just that. From its heartbreaking opening moments to its touching ending, Ori carries the weight and emotion of a Pixar movie. Its watercolor visuals are astoundingly beautiful, the story is compelling, and its eerie soundtrack set a perfect mood. Everything about the presentation just feels polished to the utmost degree.

Thankfully, the game plays just as well as it looks. What starts out as a simple platformer very quickly evolves into a Metroidvania adventure with one of the steepest (yet fair) difficulty curves in the entire genre. With a big emphasis on exploration and skill upgrades, there’s a ton of replay value as well, making Ori a much larger endeavor than it looks on its surface.

Ori was my personal game of the year for three quarters of 2015. It’s an incredible game and every Xbox One owner owes it to themselves to play this gem.

Halo 5 is admittedly a bit of an acquired taste. Between the Spartans’ new boosting and stomping abilities and the campaign’s newfound focus on squad-based tactics, Halo 5 is easily the biggest departure that the series has ever seen. At first, I wasn’t a fan. This was not the Halo that I knew and loved.

But then everything clicked. Boosts just made me more agile. Stomps and charges gave my movement extra ‘oomph’. And that four-player campaign just meant that I could find new strategies to tackle each enemy and obstacle. It’s a shame that Halo 1 already used the subtitle of “Combat Evolved” because that phrase applies more than ever with Halo 5.

At its core, this is still Halo. The weapon variety and balancing are incredibly satisfying, the multiplayer suite is larger and as addictive as ever, and the story and soundtrack are among the best the franchise has ever seen. This is not the Halo that I grew up on, but it’s still my personal favorite shooter series, and a damn fine one at that.

Earlier this year I wrote a feature about how Fallout 3 helped me through one of the toughest times of my life. I have a huge attachment to the Fallout series, and so I was among the many fans who cried tears of joy when Bethesda unveiled the Fallout 4 announcement teaser. One of my most beloved RPG franchises was returning, and with seemingly more polish and refinement than ever.

When Fallout 4 had finally released, it felt overwhelmingly familiar. The game mechanics, the landscape, the combat, and the exploration all felt mostly the same, for better or worse. But that still doesn’t stop me from spending an entire night getting lost in the wastelands of The Commonwealth. So what if it didn’t feel fresh? There’s still an epic adventure filled with hundreds of hours of discovery, and every minute of it retains a huge level of excitement and accomplishment.

No matter how much time I sink into Fallout, I still feel like I’ve only scratched the surface. This is a game where there is constantly more to do, and one that I’ll be returning to for years to come. It may not be entirely innovative, but Fallout 4 is still a fantastic adventure with an astonishing amount of content.

2. Rise of the Tomb Raider

Rise of the Tomb Raider is a game that seemed destined to be overshadowed by Fallout 4, months before the pair’s November 10th release date. Hoping to squeeze in Tomb Raider before losing myself to Fallout, I actually began my Tomb Raider campaign first. I am so glad that I did.

Rise of the Tomb Raider is everything I love about adventure games. Smooth controls, rewarding progression, great gadgets and upgrades, a compelling story, and tons of moments that will have you on the edge of your seat are just a few of the fantastic qualities that Lara Croft’s second modernized outing boasts.

It may not have the complete narrative focus that its peers have, but in every other department, this is the best adventure game I’ve played in many years. The bar has been raised, and Uncharted 4 now has serious competition.

Having only ever played Metal Gear Solid: Twin Snakes, as well as a few moments of Ground Zeroes, my interest in the MGS franchise has only been surface level at best. The Phantom Pain was not even on my radar for 2015, so it was only when the game began receiving near-unanimous praise that I decided to take the plunge.

Oh man, what had I been missing all these years? The beautiful visuals, clean presentation, monstrous amount of content, and unbelievable attention to detail made me a Metal Gear and Kojima fan almost instantaneously. This game’s presentation is unrivaled and one that just oozes personality.

But the gameplay is the real star of The Phantom Pain. Each and every encounter feels different thanks to the game’s unpredictable nature and varied gameplay. The emergent gameplay creates such compelling and randomized moments that every new twist feels incredible. There’s something very special about scoping out an enemy base, only to hear “sandstorm approaching”, and throwing out all of your plans to adapt to the situation. You really never know what to expect with MGS V.

Metal Gear Solid V left me completely blindsided. It was the game I never thought I’d need, but the one that provided me with the most incredible moments of the year. I know that I’ll be revisiting The Phantom Pain for years to come, and can rest assured that each time will be memorable.