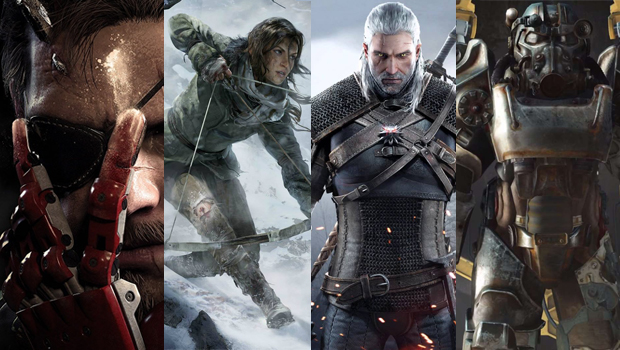 This is it — the final list of 2015. After countless hours of deliberations (which you can listen to here), our team finally narrowed down our top ten favorites games of 2015. This is, of course, an aggregation of our general thoughts, and if you’d like to see each of our individual lists you can check them out at our 2015 GOTY hub.

Without further ado, here is Gaming Trend’s top ten games of the year.

After publishing a lesser-known title called Supersonic Acrobatic Rocket-Powered Battle-Cars, developer Psyonix decided to take the lessons learned and refine the formula, down to a sleeker and simpler game simply titled Rocket League. When it launched, Rocket League dominated the online multiplayer scene with its core concept of rocket-powered cars playing soccer. It was in this simplicity that Rocket League excelled where many sports games hadn’t, as it was both approachable to play and more intoxicating to excel in. Scoring a goal in Rocket League is an experience, every single time, no matter how many matches you’ve played. Players forego common sports jargon for simple interactivity, and in almost all of our online matches, others were setting up shots and goalkeeping without any provocation or mandate. Rocket League is distilled car-soccer, and captures the idea of pick-up sports in a way that few others ever have. It’s without a doubt one of the must-play multiplayer titles of the year. — Eric Van Allen

What else to say about Undertale? It was the first 100 I gave on this site, it was the perfect game at the perfect time, and it’s one of the most clever and inventive titles around. Undertale plays on your expectations, acknowledges the player’s agency in events and toys with that, all while crafting an excellent story about a child lost in a monster’s underground. It’s about questions of morality and reason, about the power of friendship and anime and dating skeletons. Developer Toby Fox not only crafted a fascinating group of characters and locales, but fleshed them out so well that even in such a short time, they become one of the most endearing cast in games. The music plays on motifs and themes, elevating emotional moments to their highest potential, and the three endings all play on each other in interesting ways. Undertale is the brilliant result of what indie developers can achieve, and was one of the best surprises of the year. — Eric Van Allen

Just Cause 3 may not have had the best story or framerate of any game this year, but it was the most badass game of 2015, by a wide margin. Flying around, causing endless explosions, and telling cows that you’re going to kill them — Just Cause 3 is just an entertaining game through and through.

If you want to know what Just Cause 3 is about, just Google “Just Cause 3 gif,” and enjoy. — Travis Northup

For years, we have constantly heard how hard it is to craft a successful comedy video games. But one of the most overlooked difficult genres is horror. Accomplishing the proper creepy atmosphere, and coupling that with mechanics that keep the player craving more is something few titles have ever done. Until Dawn does that in spades with its unforgettable characters and choice-based gameplay. While it is clear the characters are based off of previous horror movie archetypes, they build upon each other elegantly as the narrative unfolds. These performances are spearheaded by Rami Malek as he does an outstanding job portraying the mentally unstable character of Josh. While the constant desire of exploration in hopes of keeping characters from eventual deaths is the driving force of your interactions with the game, the best moments in Until Dawn form as the different personalities collide. That is only enhanced as we find out more information in regards to what in the hell is happening in those woods. Crafting a decent horror game is a challenge, making an unforgettable one seems next to impossible. Despite those odds, developer Supermassive Games did just that. — Jay Malone

6. Ori and the Blind Forest

Ori and the Blind Forest, though heavily marketed by Microsoft over the past year leading up to it’s 2015 release, is truly an indie title. Moon Studios is comprised of a small team spread out over the world, and won over MS execs with a single demo of gameplay using a square block and executing their controls. Inspired by the “metroidvania” gameplay and a challenge level from Super Meat Boy, this is not a game that gives quarter. Coupled with an emotional storyline that grabs you from the get-go, and delivers a promise of compelling music and artwork second that simply shines, the hard-but-fair gameplay perfects the balance of challenge and ability and encourages exploration, and offers gamers a true sense of accomplishment in playing it. — Justin Pauls

5. Tales from the Borderlands

As a studio that often creates stories within the worlds of other properties, Telltale has had to deal with red tape and established lore that made stories feel like they were having to meekly exist within the negative space of whatever parallel story that the studio was was working against. In Tales from the Borderlands, Telltale is able to use Gearbox’s characters and lore with what appears to be no restriction, and it makes for a game that feels more than tangential to the big picture, and instead an imperative piece of something larger. Gearbox masterfully adapts its formula to the Borderlands world, and it resulted in what was the one of the most entertaining rides that 2015 had to offer, one with unforgettable characters, tangible consequence, and moments that will leave their mark on the Borderlands universe. — Kenneth Shepard

Whispers of Fallout 4 had been heard for years, but very few people could have predicted the impact of Bethesda’s bombshell announcement mere months before the game’s release. Luckily, Fallout 4 was everything that gamers had hoped for, bringing the series’ trademark combat, landscape, mechanics and exploration along with it. And while the end result may have felt strikingly familiar, settlement building stands out as a great (and surprisingly addictive) new addition to the already massive sandbox that is the wasteland of the Commonwealth. It may not be among the most innovative games on this list, but Fallout 4 is an explorer/scavenger’s dream and proudly boasts hours and hours of content that’ll keep us coming back for years.

3. Rise of the Tomb Raider

2013’s Tomb Raider reboot was a big step from Lara Croft’s past. Moving the character from a treasure-hunting caricature to a compelling protagonist was amazing on its own, but the step towards big action sequences, stealth gameplay, and puzzle-based tombs felt like a refreshing formula for the series. Rise of the Tomb Raider reinforces these strengths tenfold, adding even more tense combat, stealth-sandbox sequences, and plenty more tombs to raid, all within a larger world to explore and more characters to interact with. While the writing wasn’t anything groundbreaking, it delved deeper into Lara’s character, and certainly provided for an exciting ride from start to finish. Every mechanic was streamlined, and every collectible had a piece of the puzzle that played into the story in an interesting manner. Add in some gorgeous vistas and excellent graphics, and Rise was one of the best constructed games of the year, with one of the most badass protagonists around. Here’s to Lara’s next outing and the new, improved Tomb Raider. — Eric Van Allen

Concluding the Metal Gear Solid franchise might have been Kojima’s tallest order yet, and the format was certainly new territory. Moving from the corridors and hallways of Shadow Moses to the vast expanses of Africa and the Middle East was a huge venture, but one that was executed almost flawlessly. Operations in The Phantom Pain are emergent and open, allowing for any number of possibilities. You could sneak in under cover of night to silently execute a target, or you could run in guns blazing. You could call in your support helicopter to make use of its miniguns, jump on your D-Walker for additional firepower, or have your sniper pal take them out from a distance. You could even forego killing your target, instead knocking them out and Fulton-ing them out, adding them to your growing roster of Mother Base soldiers. There were less cinematics and story focus, and it goes to some controversial places, but that paled in comparison to the sheer amount of potential in its sandbox. Your support helicopter can fly in to back you up, blasting “Maneater” by Hall & Oates. That’s a pretty great game. — Eric Van Allen

CD Projekt RED did more than build a new Witcher game, they put the rest of the development world on notice — this is the raised bar for role-playing games.  Engaging, beautiful, unpredictable, and challenging, The Witcher 3: WIld Hunt also received a dozen pieces of DLC at no charge before CD Projekt RED launched their first for-pay piece of content.  It isn’t the additional content that made it special, though — the team made every piece of the game feel hand-crafted.  Many RPGs have ‘filler’ side quests that feel like they are a vehicle to artificially raise player levels.  Each mission in the Witcher 3, no matter how small, felt like it could have easily been a part of the main storyline.  Geralt’s character growth from a growling Witcher to a father figure with substance is a worthwhile journey.  CD Projekt RED has stated that they will continue to expand this already-incredible world throughout 2016, so we can expect a great deal more from our Game of the Year.  — Ron Burke