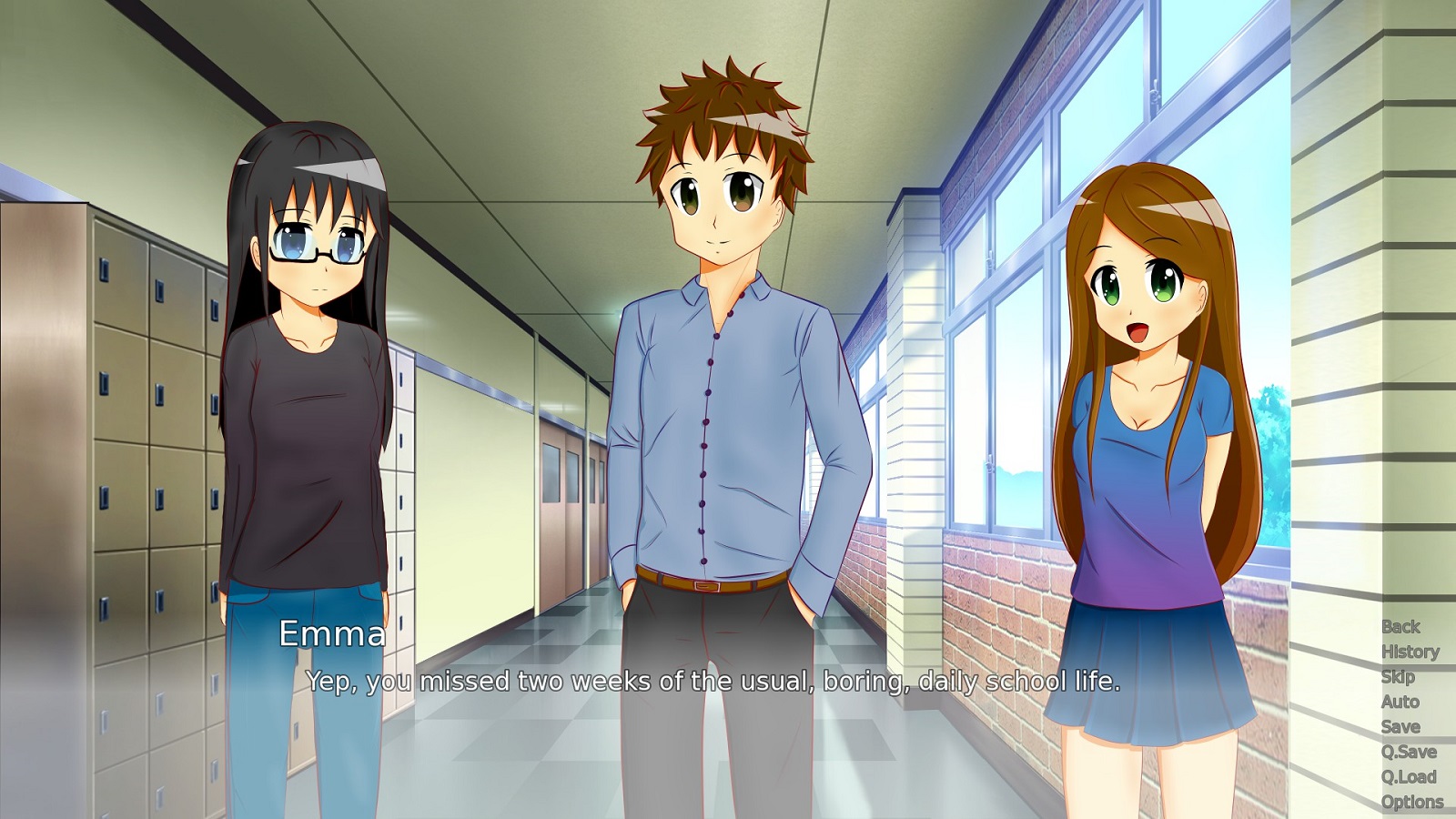 Before anything else, let me tell you the story of why I bought the visual novel Jake’s Love Story:

1. I have a friend named Jake.

Why these two reasons were the impetus for me getting this game I’ll never know. I bought the game last year and never got to playing it, but now I can see why 2018 me didn’t want to. While I can see that Jake’s Love Story was developer Mikołaj Spychał’s passion project (and also the first one on Steam), it just feels too generic and uninteresting to be enjoyed even as a “so bad it’s good” title.

In Jake’s Love Story, you play as the eponymous character as he spends three years in high school. Throughout the course of the story, you get to meet Emma, a clumsy girl who loves anime, Alice, a shy and brooding person that opens up later, and Mike… just Mike. Seriously, for a supporting cast of three characters, the developer just threw in Mike to act as a neutral third party. There’s nothing remarkable about him, or Jake if we’re being honest. Throughout your three years, you get to develop friendships with the trio, and as is the case with a lot of visual novels, your choices will determine which of the nine different endings you get. 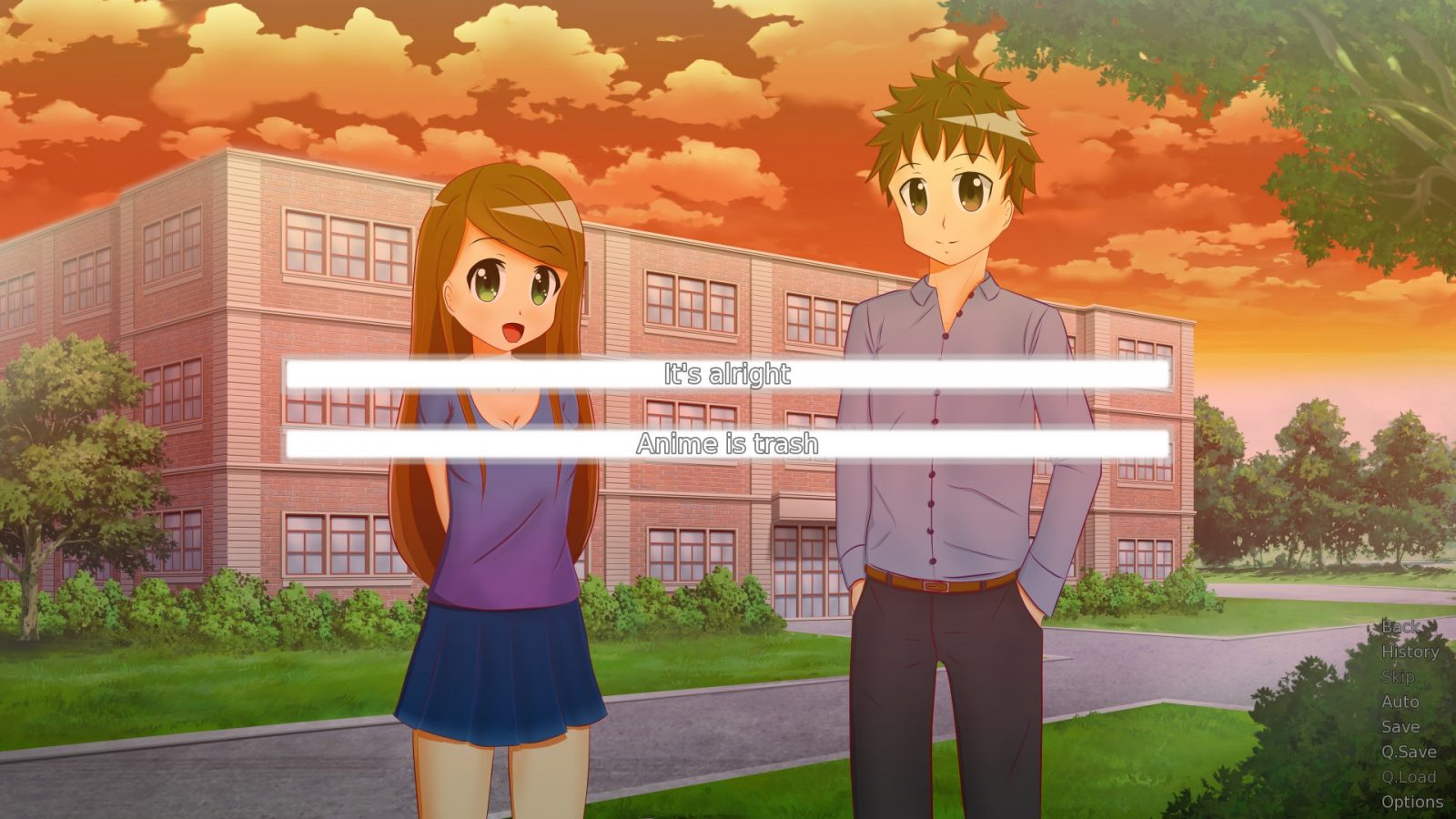 I have a casual relationship with visual novels, and I still need to get to playing the classics, but I’m always up for at least a few hours of reading fun (I’m currently getting into Will: A Wonderful World, which might be a future BotB). With Jake’s Love Story, however, I got to wrap up my initial runthrough and most of the endings after a little under an hour, which was pretty disappointing. The last time I experienced this was with The Pizza Delivery Boy Who Saved the World, and I would probably give both games roughly the same score.

I feel like the best western visual novel localizations use witty humor and sharp writing to get their point across, but here everything just feels so unremarkable. Everything but the characters are unnamed, the music is one-note, and even the character sprites feel like an amateur DeviantArt job. Heck, if we’re going to go further with this, there are two named characters that don’t even have sprites! Your whole runthrough is staring at a combination of Emma, Alice, Mike, and a little face that represents Jake in the bottom left corner. Sure, there are different outfits for appropriate events, but there’s nothing here that I haven’t seen in a Renpy template. (And I should know, I actually did help with writing a visual novel demo a while back). I admit, the backgrounds are pretty neat, but there are so few of them that it doesn’t really make this too big of a positive.

Overall, the writing is a unique blend of uninspired and cringe-inducing. Take Emma, for instance: the first time you meet her in any route, she’ll talk about anime and hint at how her encounters with you are “ripped straight from that anime I watched!” (paraphrasing). Or maybe that Jake looks like a regular anime protagonist and how she’s infatuated with him because of that. The biggest problem? She doesn’t even namedrop an anime! I wouldn’t mind a title parody or something, but the fact that she just tells, not shows, is a weird thing indeed. I wanted to like her cringe-worthy answers to everything, like when she wanted to go to a hot spring because… anime, but the game takes this stereotype and makes it so overexposed it’s boring instead of intriguing. You can even reply “Anime is trash” during a couple of scenes, so guess what I said? Even the one attempt to shoehorn some (all-ages) fanservice falls flat due to the awkwardness of the whole situation and because of how out of place it all is. Emma’s too naive to be likable and too generic to be quirky, so all in all, it just makes her an uninteresting romance option. 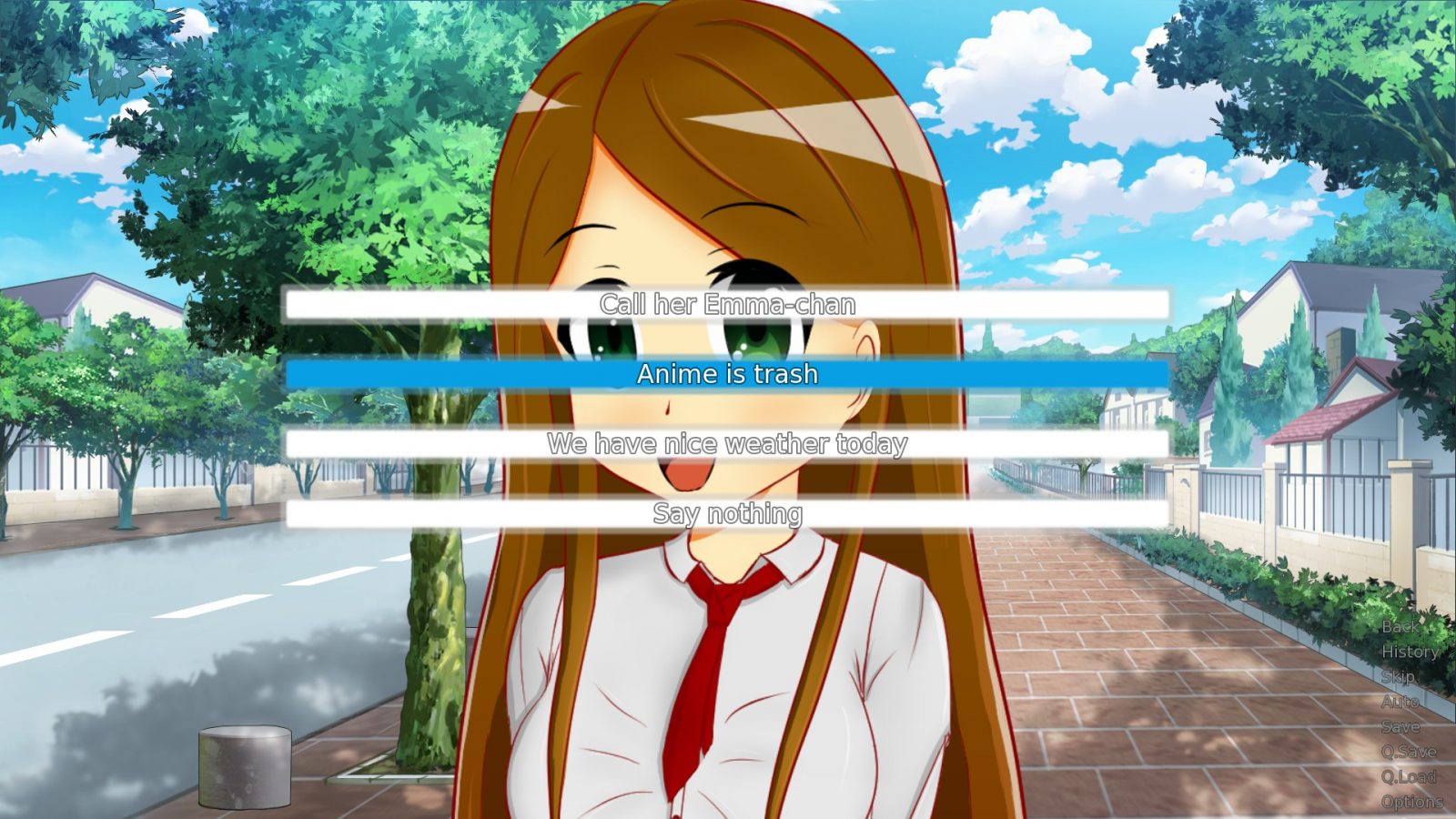 Not like there’s any romance here, regardless of the title of the game. The only real romantic things you can do at the end is to go on a camping trip and take a walk or see the stars and then attend prom. (Which, come to think of it, summed up my high school romantic life, so actually it might be a bit too accurate.) Sure, there are cute activities you can do, like buying a birthday present for Alice or calling Emma to tell her that she failed her math test, but that feels more like a platonic friendship than a true dating sim. I would have been more comfortable if the game was renamed “Jake and his friends” because it really just is a friendship simulator.

To the game’s credit, the one character I actually felt was relatively fleshed out was Alice, who intimidates Jake until he gets to know her. While her character was predictable and cliché at times, I did appreciate the thought of making her a little more three-dimensional than Emma and Mike, and I did my best to try and ask her out to the prom dance when given the chance.

Would I recommend Jake’s Love Story? Definitely not. Do I regret the time I spent with the game? I would say no, but that’s because I wasted only an hour of my life with it. Thankfully, the developer has some newer titles out on Steam, and from the looks of it, it seems like they’re a bit improved. Perhaps I’ll check out the next titles, but for now, I’m sorry, Jake: anime was a mistake. 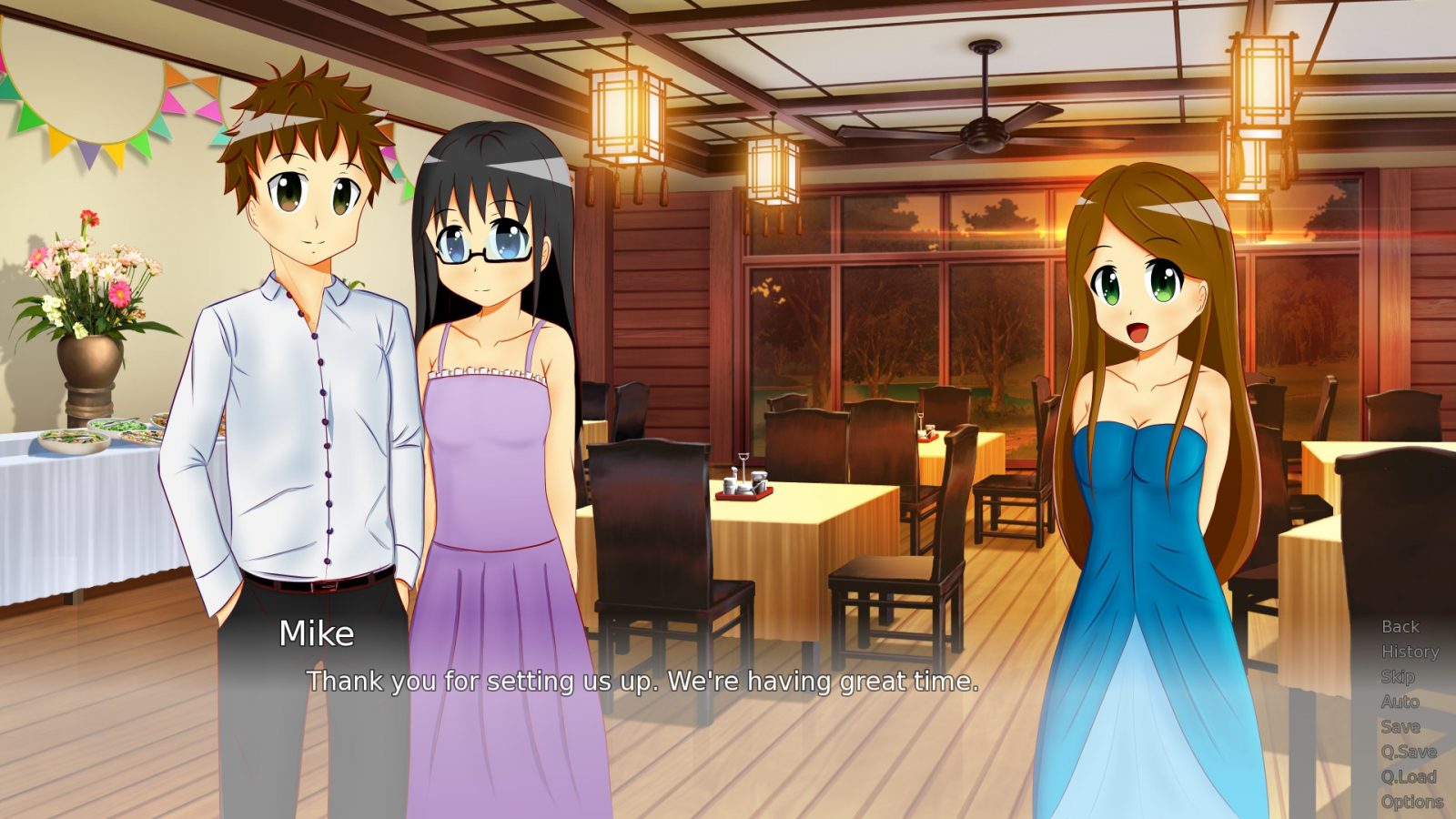