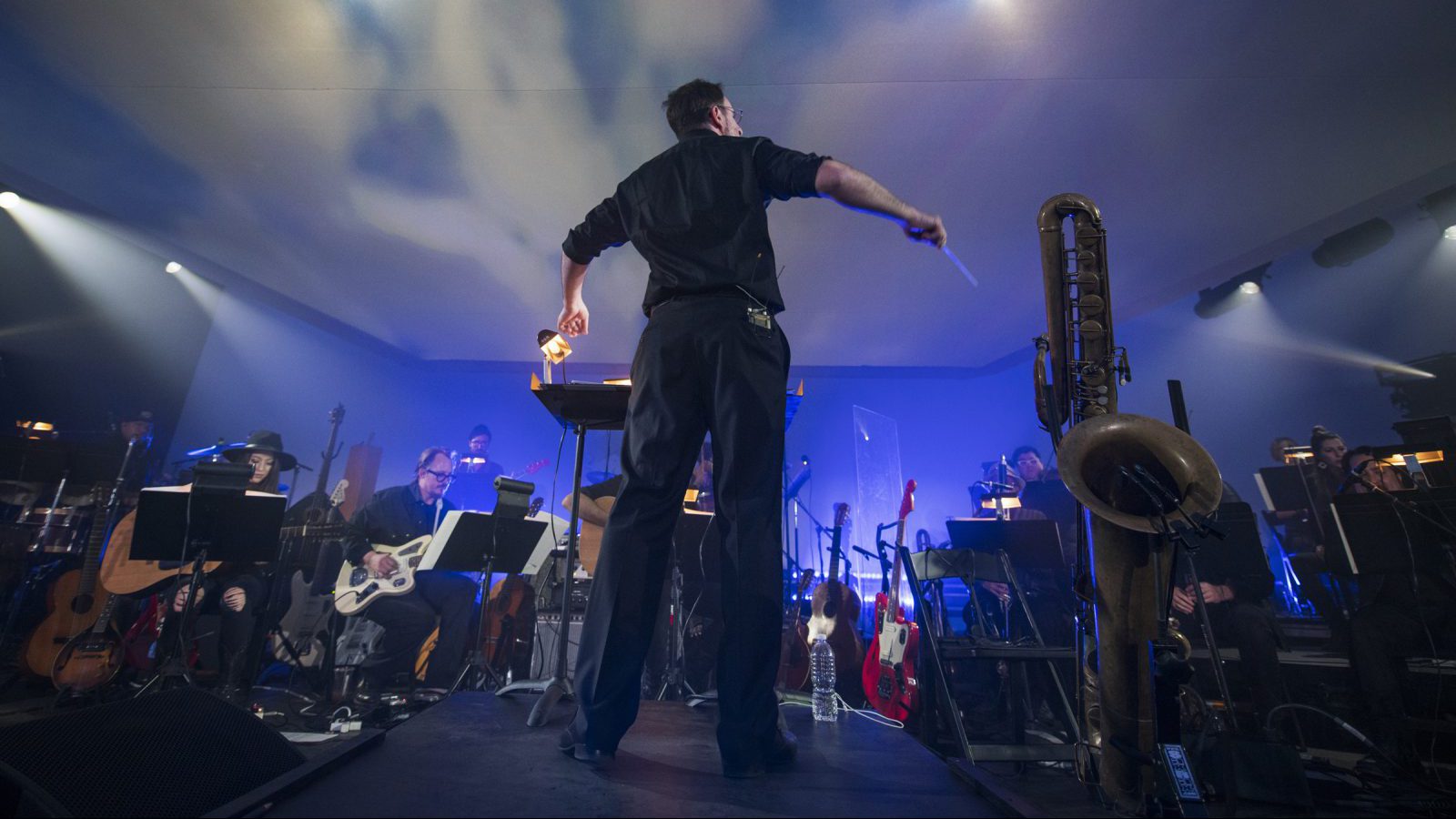 Nestled down a side street in Hollywood at Goya Studios, attendees huddled beneath patio heaters and sipped Red Bull cocktails while waiting for the doors to open. The crowd, a mix of industry insiders and dedicated gaming enthusiasts made small talk, discussing their experiences with Red Dead Redemption 2. Some had finished the game, talking about the extended epilogue, while even more discussed not having completed the game, citing the sprawling open world packed with distractions, and overflowing with countless details to discover and explore. Each conversation, however, circled back to the immersive atmosphere of the game.

A significant part of the immersive atmosphere of Red Dead Redemption 2 is due to Woody Jackson’s expansive, 80-hour score. Reprising his role as composer from previous Rockstar games, such as L.A. Noire, Grand Theft Auto V, and the original Red Dead Redemption, Woody, and the recurring ensemble of talented musicians, composers, and producers worked tirelessly to create the thematically infused music that permeated your journey into the old West. 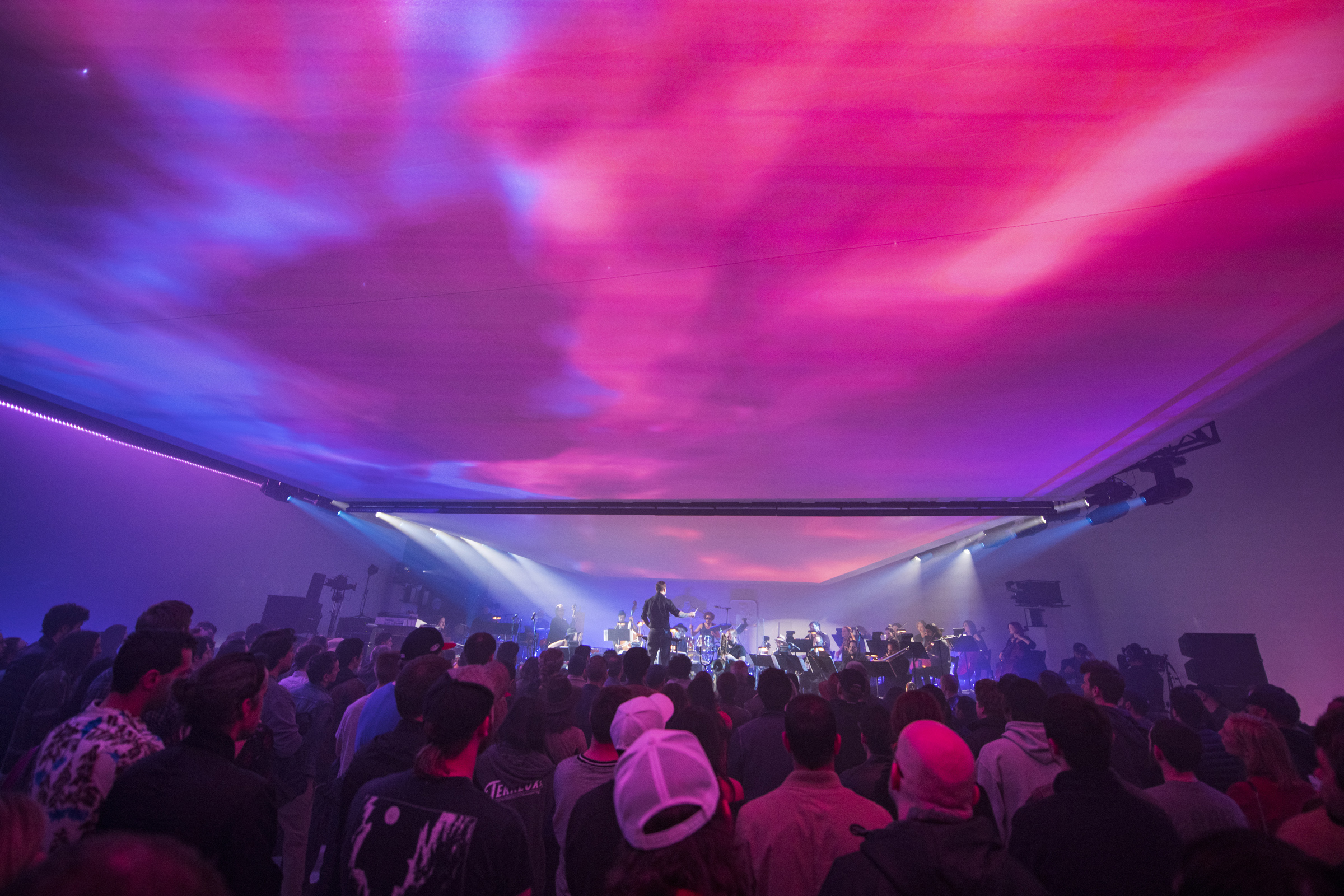 The venue was darkly lit with Red Bull’s iconic red hue, and the only adornment on the otherwise plain white walls were carved Red Bull and Rockstar logos behind the orchestra. When the performance began, the light transitioned to a soft powder blue.

As Woody and company began performing the first song, projectors displayed snowy, forested landscapes. Together, the projections and the music transported the audience back to that first mountaintop in Red Dead Redemption 2, evading Pinkertons in the icy blizzard, while desperately searching for shelter and respite for your sick, your injured, and your freezing. Petra Hayden’s ethereal vocals blended with the string section: cello, violins, and theremin, while the electric bass and guitar from the rhythm section provided the dogged, menacing cadence that evoked the feeling of being pursued. Together, the music left you feeling both haunted and hunted. 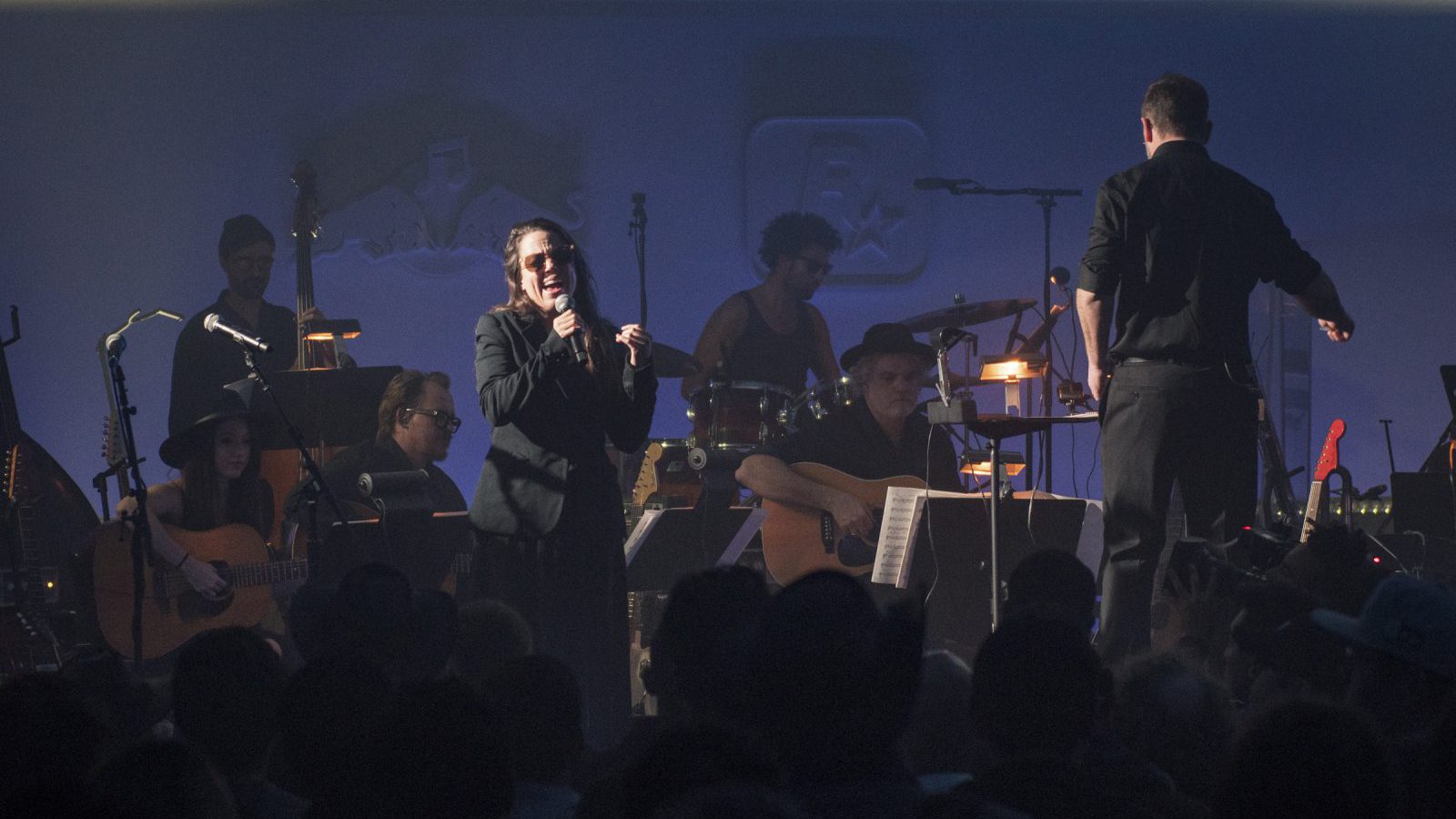 As the songs progressed, they wordlessly ushered you through Arthur’s journey. An early song evoked simply wandering through town, scouting a job. While on the surface, it seemed casual and day to day, an undercurrent/ thread of anticipation ran through the music, blending a jaunty tune with an almost dirge quality.

Another song had a Western theme that could have been at home in any Sergio Leone film, including twangy guitars and banjos and impressive whistling from one of the violinists. Yet it also had this modern element to it, especially with the horn section. French horn, trumpet, trombone, and an incredibly impressive performance on the bass saxophone by Colin Stetson. So impressive that one audience member wondered aloud how he could breathe while he played. 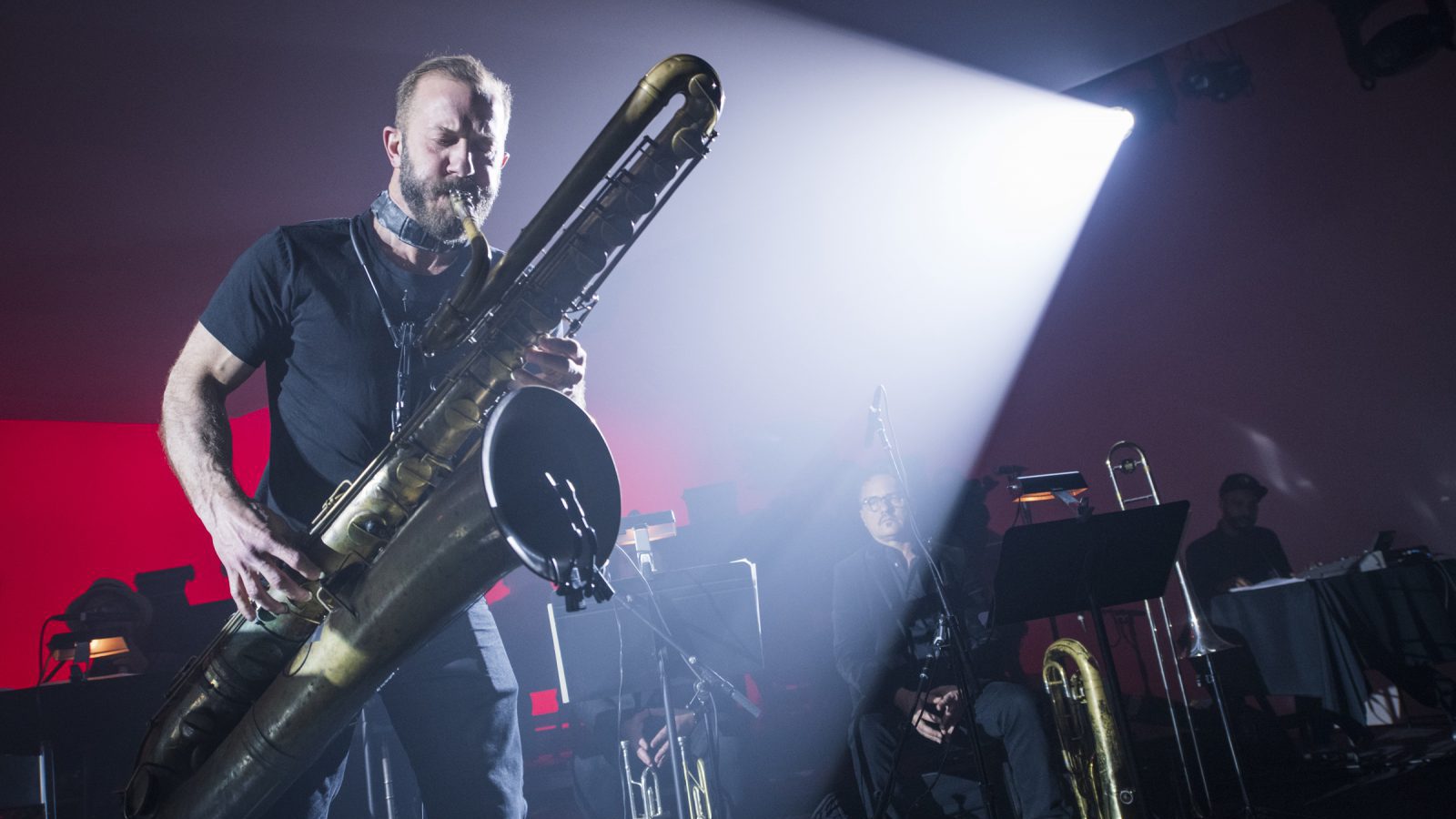 Jon Theodore on drums was a treat. He and the other drummers, playing a variety of drums, congas, bongos, and shakers performed with great nuance, varying from soft, understated accompaniment to thunderous booms that punctuated dramatic swells.

Senyawa performed as part of the orchestra, and their stamp on the music of Red Dead Redemption 2 was unmistakable. Wukir Suryadi’s trademark custom-made instruments were on display, producing a sound difficult to describe other than something uniquely Senyawa. One song in particular stood out for Rully Shabara, the vocalist of Senyawa. In it, he portrayed the bird and animal sounds of an unfamiliar jungle during Arthur’s jaunt to Cuba. Labeling his performance only as “bird calls” would be a grave injustice, however. The sounds he made were much more: more sinister, more bizarre, more extra human. It was as if the small theater had been invaded by fantastical creatures. They seemed to chatter to one another with a dark, alien hunger. 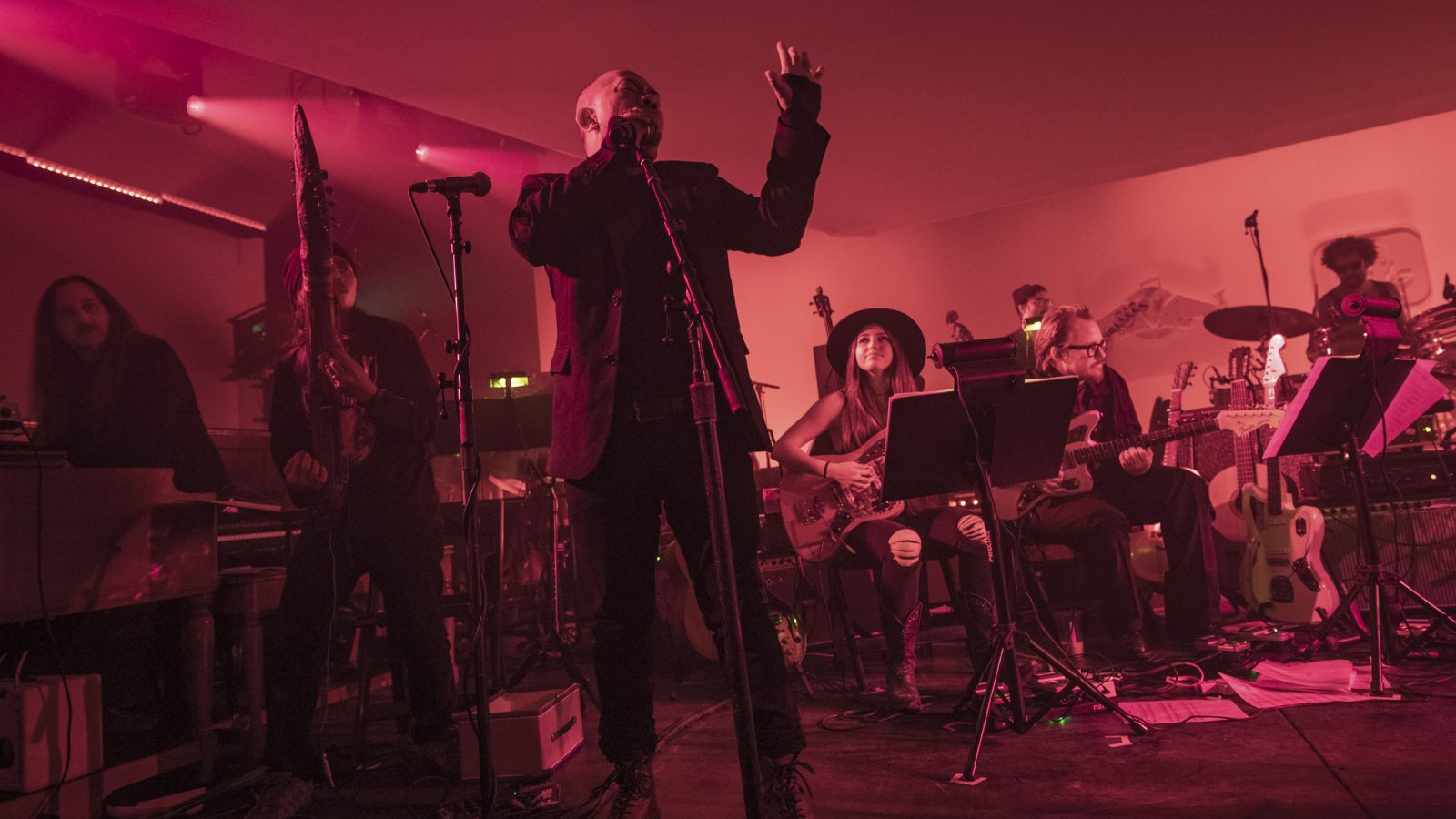 Both Oh No and Woody Jackson himself performed as well. Oh No sat tucked in a corner, eyes glued to the conductor while he provided his digital undertones to the performance. It’s a bit unusual to have a digital component to something so orchestral, yet when you focused, you noticed that Oh No enhanced each of the songs, adding body, without standing out in a “that’s a computer!” way. Woody played rhythm electric guitar for many of the songs, and for the penultimate piece, which was unmistakably a huge, story driven shoot out, Woody ripped a powerful guitar solo. Along with the booming horns and thunderous drums, you could easily feel yourself in the throes of an Old West shootout.

The finale was highlighted by Rully Shabara and Petra Hayden returning to the stage. Their chanting vocals entwined together, infusing the music with an enduring sadness that typifies the denouement of a classic Western tragedy—the perfect capstone for Arthur’s journey and for Red Dead Redemption 2. 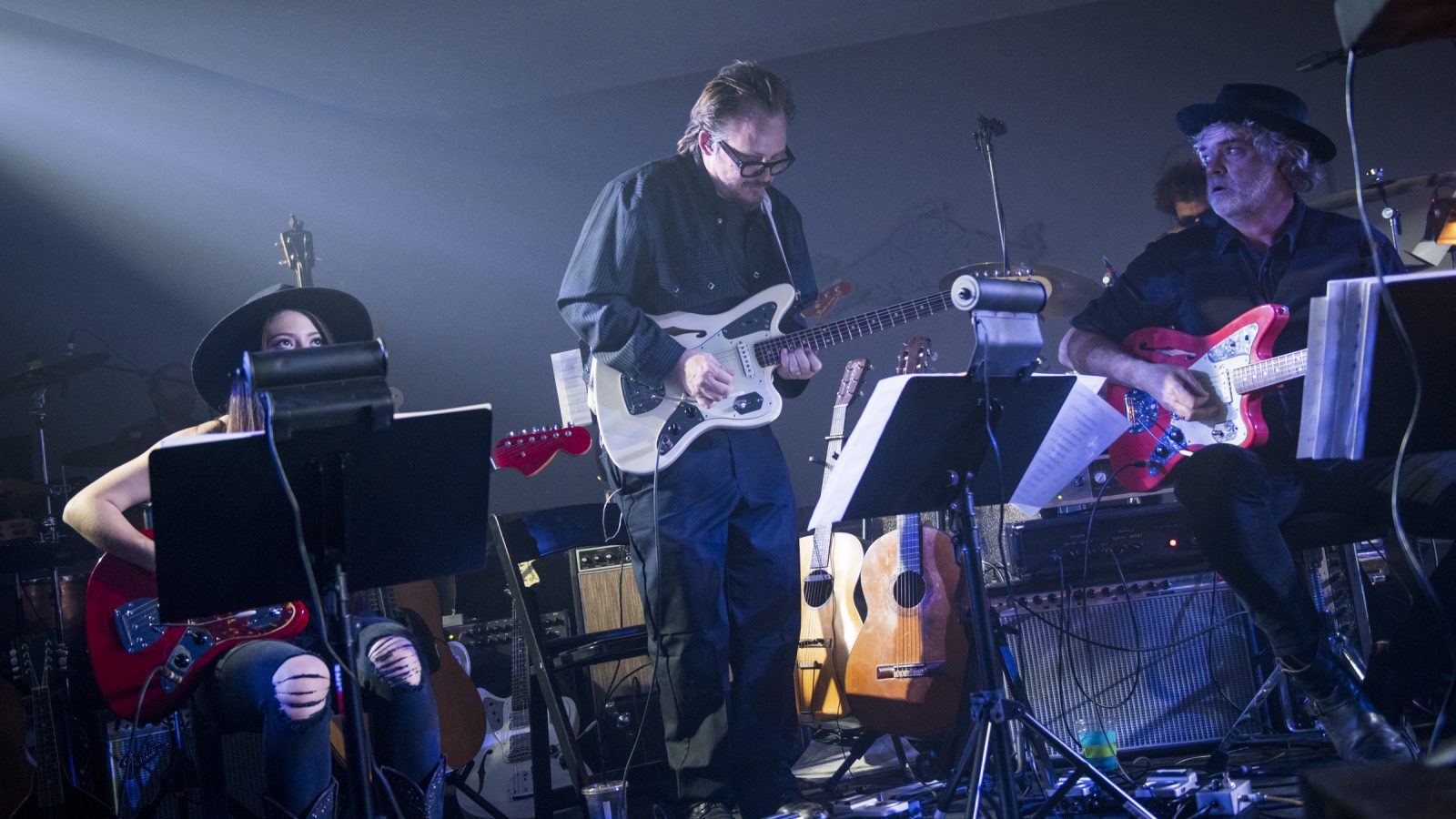 It never ceases to amaze how music can transport you right back to a place, right back to a certain moment. Woody’s music, and the orchestra, did precisely that. The orchestra was tight and precise, a testament not only to the high quality and professionalism of the musicians, but also the skill of the conductor. Another aspect of the musicians’ performance was how much they enjoyed themselves. They grinned at each other between songs, and bobbed their heads and tapped their feet to the music. You could tell that they were having fun.

Red Bull Music described this performance as an “auditory installation,” and the added projector and lighting elements created a subtle but transformative element to the performance. The projector showed an array of images: the snowy mountain top, a generic but homey Old West town, flashes of lightning, the burning riverboat, and even the aurora and the open night sky. This was a bit of a departure from other “music from the game” performances, because it is seemingly de rigueur to have recorded gameplay footage playing on a big projector screen during the performance. This deviation from the norm really reinforced Woody Jackson’s and Rockstar’s emphasis on atmosphere. 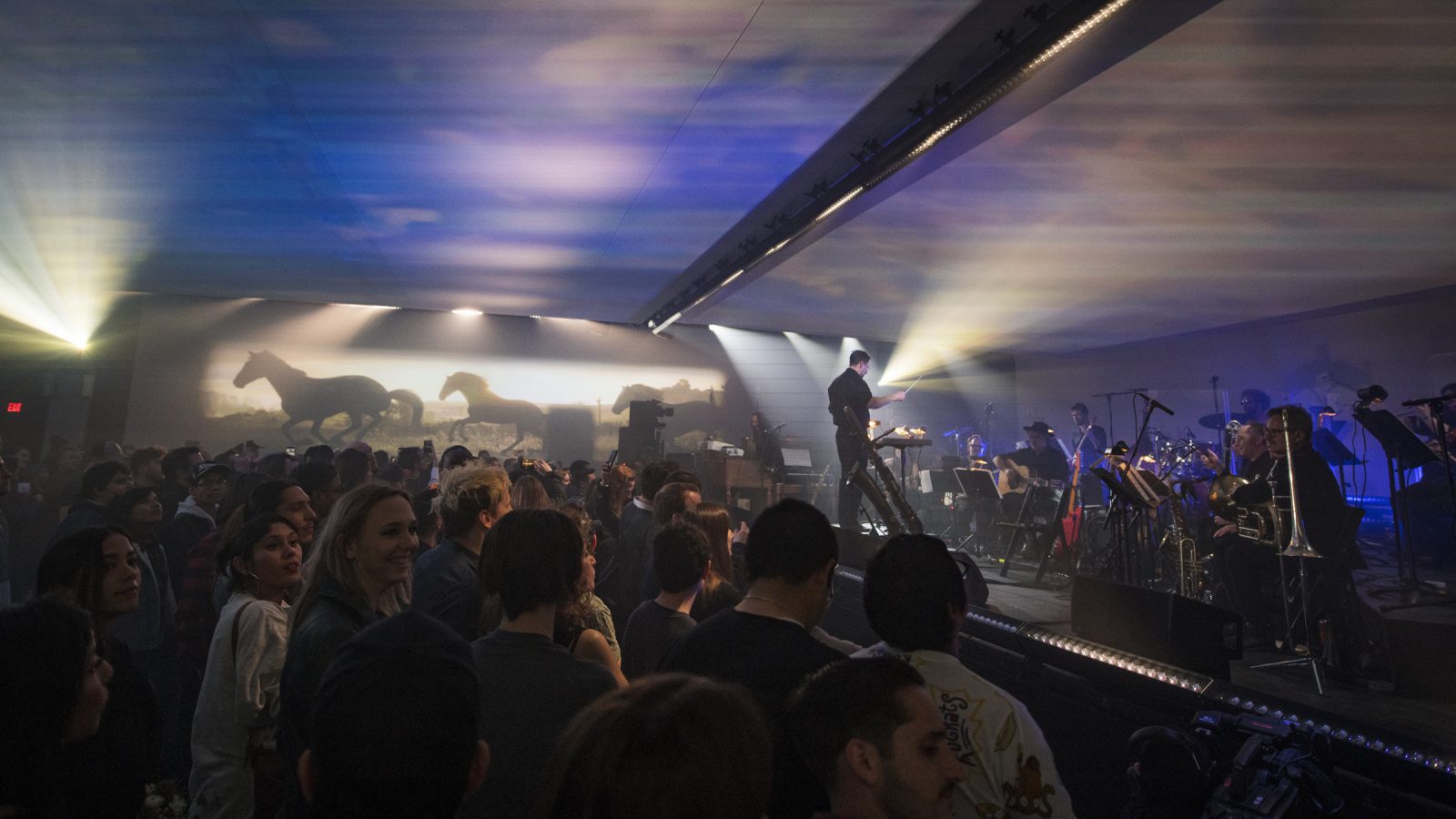 The work done by Woody and the army of musicians, engineers, producers, and composers for Red Dead Redemption 2 is nothing short of incredible, and to hear it live is awe-inspiring and leaves a lasting impression. Unfortunately, the soundtrack and score for Red Dead Redemption 2 is not yet available for purchase, much to the chagrin of gamers and music lovers alike. However, Rockstar has announced that the score and soundtrack will be available in Spring 2019, so keep your eyes and ears open.