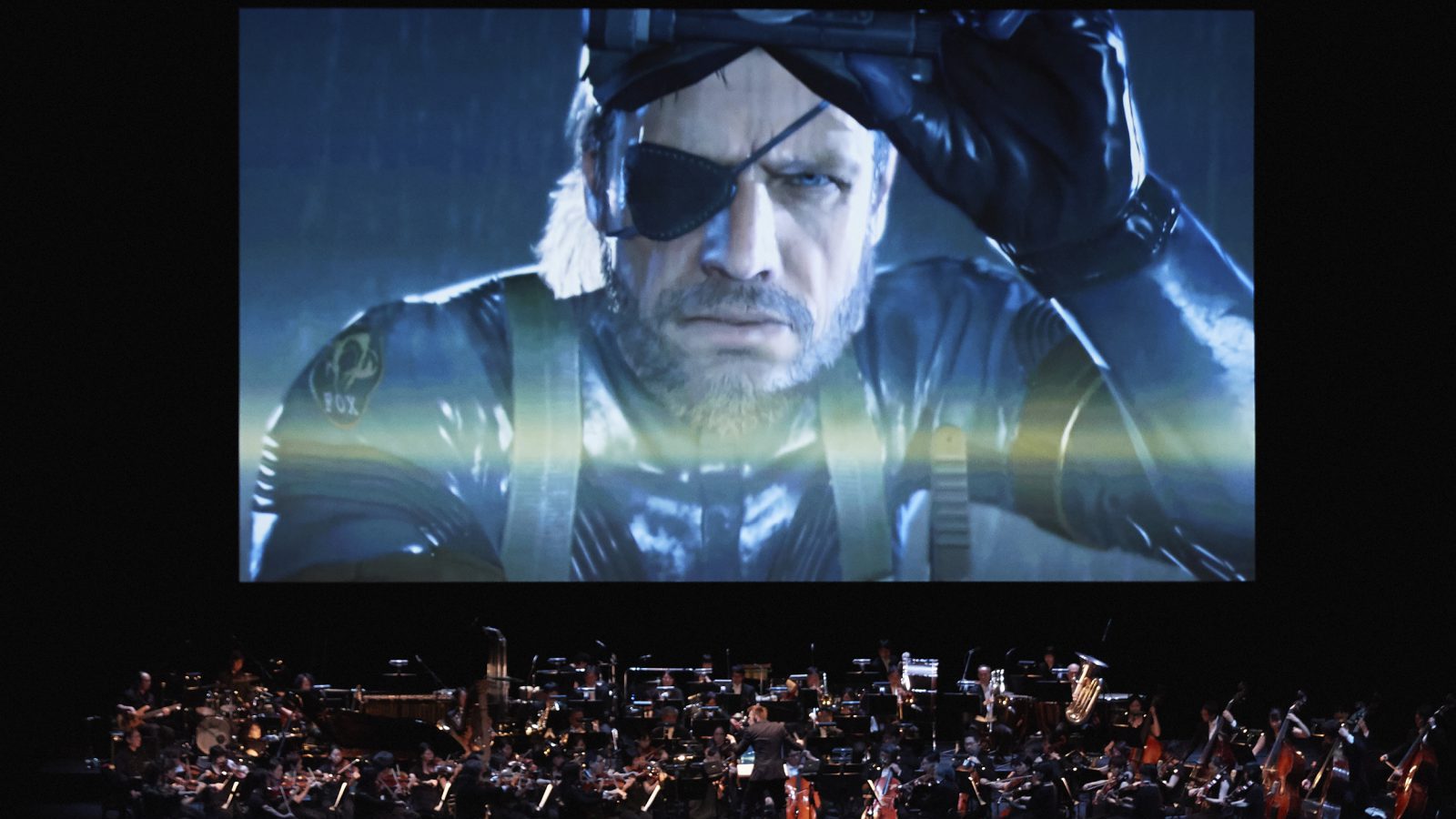 When I settled into my chair at the Wilshire Ebell Theater in Los Angeles, I was a little surprised at the crowd that had turned out for Metal Gear in Concert. My fellow gamers were there of course, including cosplayers. However, there were pure music enthusiasts as well. As I waited for the performance to begin, several people mentioned that they’d never played any of the games, and that they were just there for the music. One person said that they’d never even heard of the storied game franchise, attending because she loved music and her friend insisted she’d love the performance.

Overhearing these conversations before the show and during intermission, I realized something pretty poignant: I’ve followed the journeys of Solid Snake, and later, Big Boss for over 30 years of my life. Very few gaming franchises have been this long tenured, and even fewer have had a consistently engrossing, singular story like Metal Gear.

The lights went down and the conductor, Nicholas Buc greeted us. He teemed with excitement as he gave us a short introduction, then began the show. The orchestra started with the main theme from Metal Gear Solid 3: Snake Eater. The cinematic on the screen suspended above the orchestra showed us Naked Snake (soon to be Big Boss), chomping on his signature cigar before he tosses himself out of the C-130 and onto the battlefield. It makes sense to start with MGS:3, the chronological beginning of the Metal Gear saga, so that the whole story can unfold through the music.

We accompany Snake on his mission as he meets Eva and Ocelot, engages in electrifying (in Colonel Volgin’s case, literally electrifying) boss battles, pursues the Shagohod, and ultimately faces down his former mentor, Boss, in a field of flowers. The final confrontation with the Boss is particularly meaningful for me, because I consider that boss encounter to be one of the most cinematic gaming experiences I’ve ever had, and hearing the full orchestral arrangement of the music from that encounter was incredibly moving. But, the stand out from the MGS:3 section was “Sidecar -Escape From The Fortress-,” and Takin’ On The Shagohod.” The frenetic energy of the string section, the thrumming upright bass, and the booming timpani adding oomph was simply perfect for the frantic escape and subsequent battle with the Shagohod. 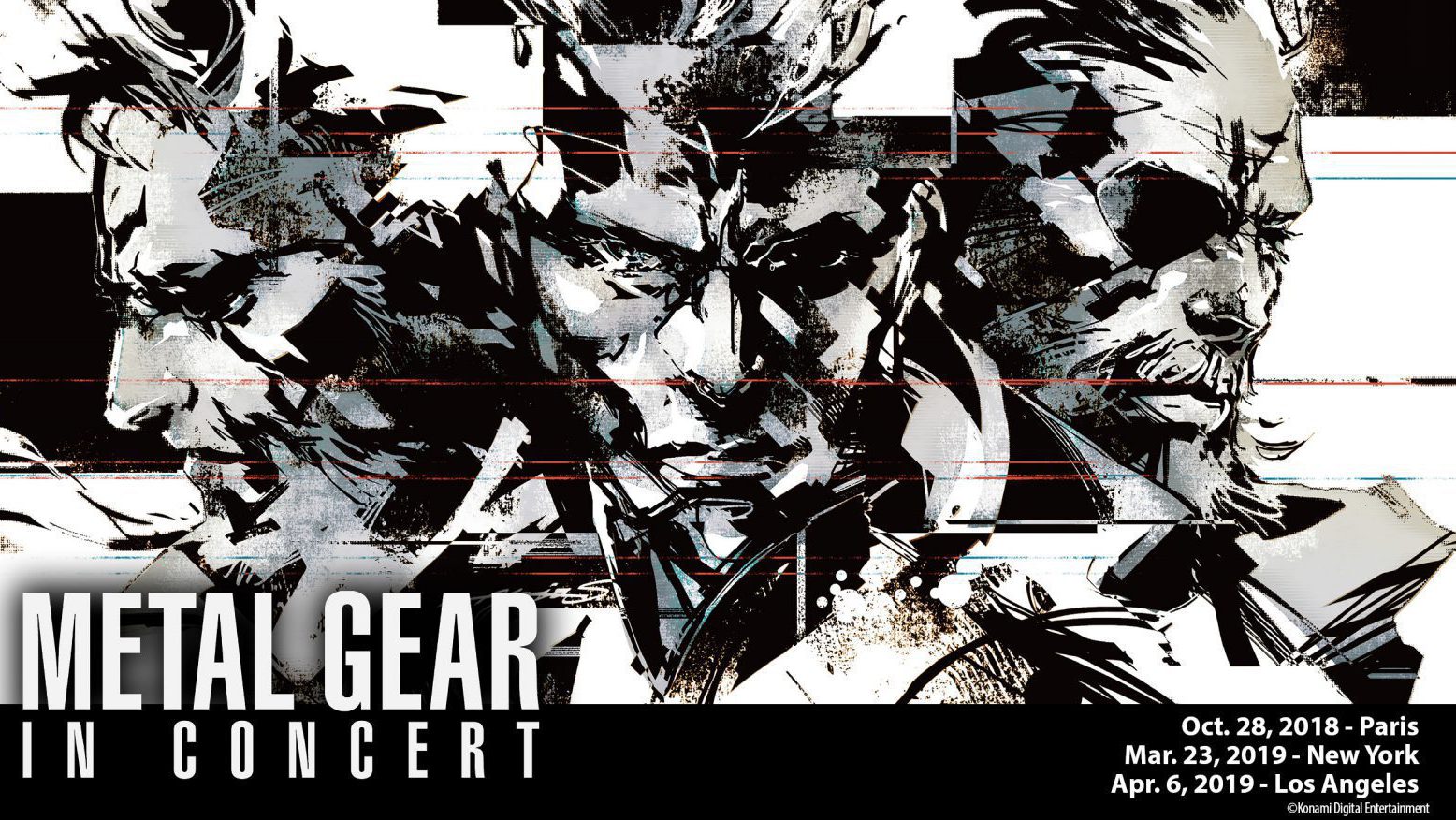 Peace Walker followed in the games’ chronology, and we were greeted by Snake wandering out onto the beach as his men trained. As the orchestra played the familiar themes from the game, I was struck by how different the dynamic comic book style of cut scene was from the fully motion captured FMVs from MGS:3. However, since Peace Walker was released on PSP originally, it made perfect sense as a design choice for the platform’s limited hardware.

I know it’s a little strange to talk about cinematics during a musical performance, but there is a symbiosis between the cinematics and the music. Sure, the cinematics take us back to where we were when we heard the music, anchoring us to the moments the songs portray. But the other side of that relationship is the importance the music makes to the cinematics and the storytelling. At first blush, the cinematics of the early games reflect the limitations of the graphics of the time. Peace Walker eschews traditional FMVs entirely, and the cut scenes from MGS:1, while filled to the brim with incredibly sophisticated cinematography, look positively antiquated. Yet when paired with the music, especially the fully orchestrated versions of the songs, the awkwardness of the primitive graphics fade away, and we’re left with the distilled emotional impact of each powerful story beat.

MGS:V reminded me of many of those powerful story beats. The string section grew even more prominent, transitioning to a heavy, lifting rhythm, while the harp emerged in a stand out role. While all games in the Metal Gear series are focused on just that, taking out the Metal Gear, MGS:V reminded me that the journeys of the franchise weren’t just about Snake and battles with giant robots. Kaz, Ocelot, Quiet, and even Diamond Dog all had their own journeys filled with suffering and struggle, but also great triumphs. When Snake rescues the child soldiers, and they file off of the helicopter, encouraged to find a hot meal and a warm bed, it’s a triumph for all of them, and an incredibly touching moment in the franchise.

At the close of the MGS:V section, Donna Burke, vocalist for many of the iconic songs from the franchise, and the voice of the iDroid, came out in an elegant dress to perform “Sins of the Father.” She and the orchestra deliver an incredible, better-than-the-recording performance of the moving song.

After intermission, the orchestra launches into the iconic theme from MGS:1. TAPPY’s composition shines, and, when translated and arranged for the orchestra, the brilliance of the piece that would become the tentpole of the franchise really stands out. The strings, brass, and drums are all central to conveying that frenetic pace that shifted the stealth genre from its plodding, patient roots to the modern run and slide and duck and dive approach of Metal Gear Solid’s tactical espionage action. 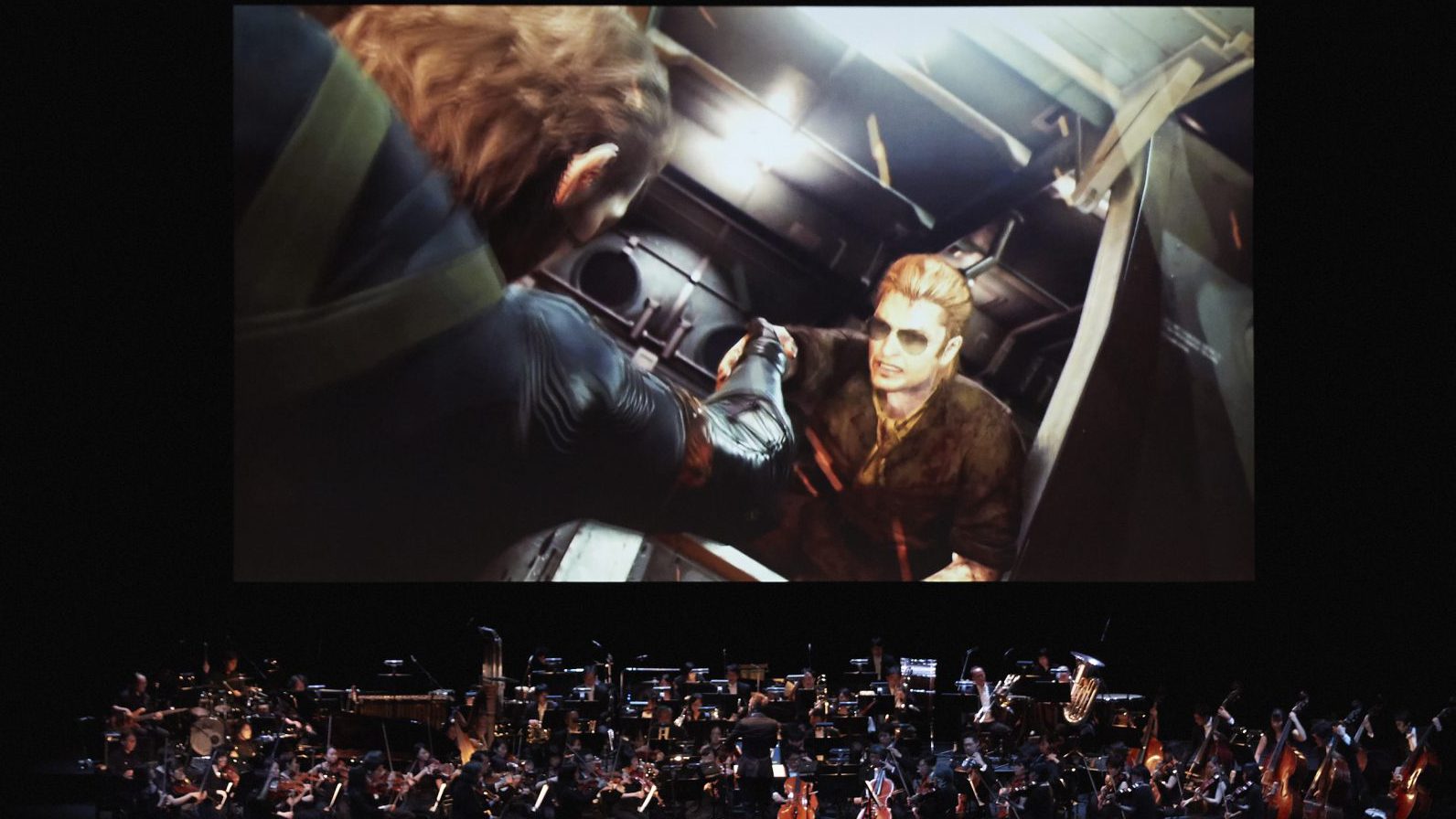 Everyone remembers the jovial, sometimes silly moments in MGS:1. Sprinting circles around baffled guards, that iconic shocked klazon when you were discovered. But as the crowd broke into chuckles, I never noticed how the music fed into that comical atmosphere, or how smoothly it transitioned into the more sinister, eerie, and outright creepy moments of the game. Also, it was a bit surreal, revisiting characters I hadn’t thought of in twenty years, and reliving their stories. Otacon’s strange but heartfelt love affair with Sniper Wolf. Vulcan Raven’s nobility. Meryl’s tenacity. Psycho Mantis’s perverse yet sad existence. All of these characters, and the battles you shared with them, set the tone for the camaraderie you had with the enemies you faced on the battlefield, and the overarching theme that, no matter how skilled or powerful you were, you couldn’t escape being pawns on a chess board. No wonder Big Boss and Kaz dreamed of Outer Heaven.

MGS:2 represents the first full orchestration of the music of Metal Gear, and the entry of Gregson-Williams with a cinematic, theatrical score. As Snake lands on the oil tanker, discarding his damaged cloak and his cigar, I remembered the excitement of another installment of Metal Gear with my favorite protagonist, and the bitter disappointment of the Raiden bait and switch (though the over the top, futuristic cyberpunk action of Metal Gear Rising: Revengeance almost made up for it). Gregson-Williams’ fingerprints are all over the score, with heavy drums thundering with each boss battle. It’s interesting to come to this first big orchestral score in such a roundabout way, hearing how the music evolved earlier in the show, and now listening to where the music originated with TAPPY and Gregson-Williams.

I forgot how emotionally charged the end of MGS:4 was. Of course, there were the endless cutscenes, the meandering exposition attempting to button up decades of mythos in a single game. But, at the journey’s end, as “Everything Ends” and “Father and Son” and the cinematics played, we watched the final moments between Solid Snake and Big Boss: enemies, pawns, brothers in blood in a twisted way, and ultimately family.The sinister dirge, filled with booming horns of “Everything Ends” transitions sweetly to the violins and rolling drums sweetly playing the mournful but also hopeful “Father and Son” capping off Hideo Kojima’s magnum opus.

After a medley of many different Metal Gear songs not portrayed in the performance so far, that really highlighted the thematic consistency of the music throughout all of the games, Donna Burke returned to the stage in another dazzling dress. This time, she performed “Snake Eater” from MGS:3, and finished the concert with “Heaven’s Divide” from MGS:4.

Donna Burke delivered a devastating performance. The cymbals crashed and her voice boomed with an incredible clarity. She demonstrated her incredible vocal range and precision, conveying the perfect blend of many years of practice and the full emotion of her material. I cannot overstate how stunning and chilling her performance was (seriously, do yourself a favor and listen to “Sins of the Father”. Then imagine it live, crystal clear and pitch perfect).

It can be a challenge to separate the music of Metal Gear into separate pieces for each of the games. Many composers brought their incredible talents to Metal Gear over the past 30+ years of the franchise (too many to name here, honestly) but the most significant contributions to the sound were by TAPPY (Tappi Iwase) and Harry Gregson-Williams. TAPPY composed the iconic Metal Gear Solid theme. His string section composition was responsible for the rapt, tense moments throughout the game. Gregson-Williams, in subsequent games, really opened up the orchestration, giving us big orchestra elements, like the booming timpani and explosive horn section. 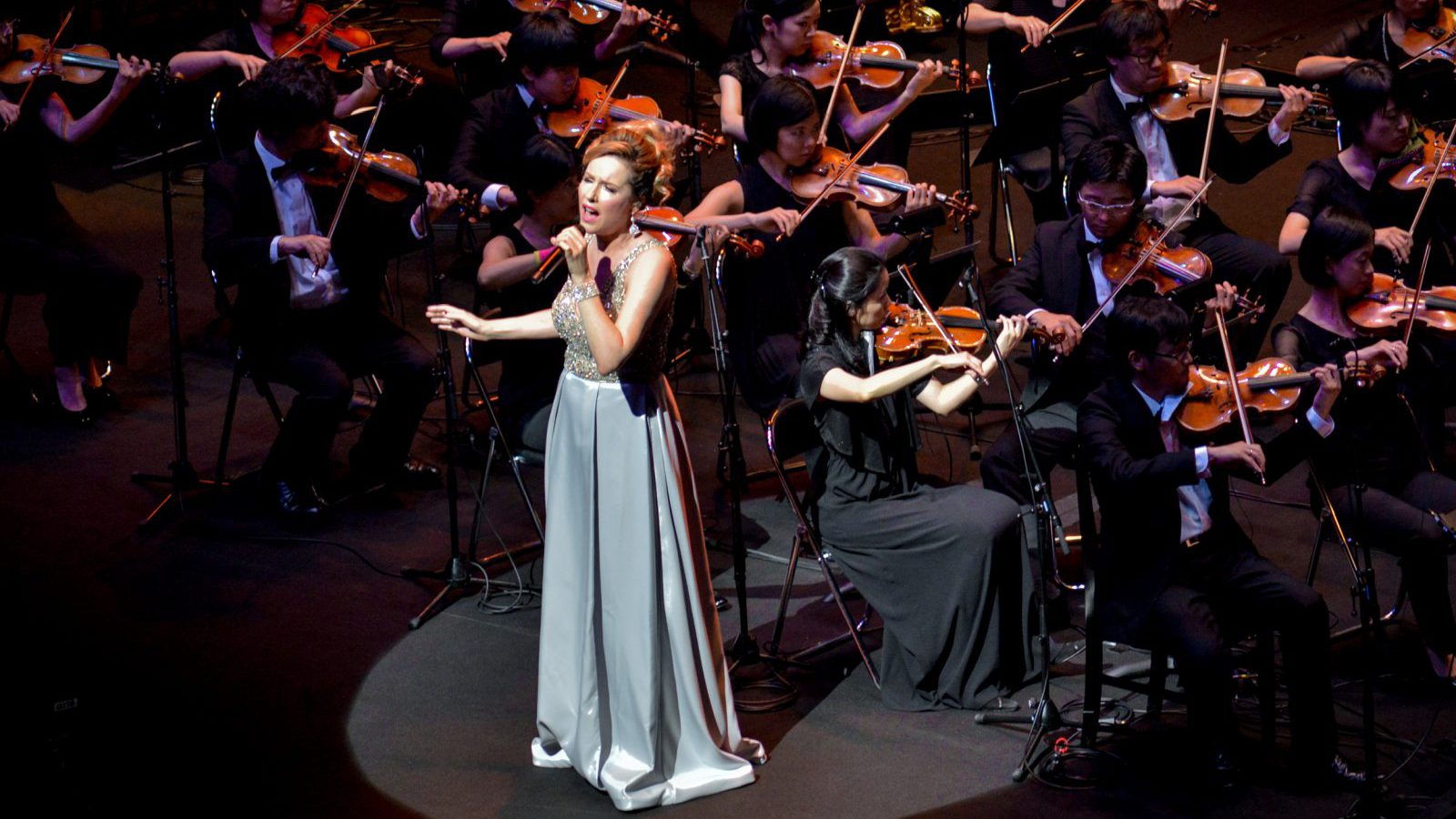 What I found most impressive about their compositions across all the games, however, is not just its thematic consistency, but the progressive growth and evolution of the sound. If you hadn’t played the games and just listened to the music in the games’ chronological order, you would be able to follow the timeline of the games through the music alone. MGS:3 has crashing cymbals and horns that give it a James Bond, sixties vibe. Peace Walker evolves from there, nixing the cymbals and instead folding in congas and hi hat, making for a brighter and more hopeful sound, that continues all the way through the epilogue. MGS:V has a distinctly eighties sound that mixes the pop vibes from Snake’s tape player with a big, eighties style score that would be right at home with any great action thriller from that era. MGS:1 has a heavier synth sound consistent with the evolution of game music from 8/16-bit midi to full dynamic sound, to the fully fleshed out film scores of MGS:2 and MGS:4. And yet, throughout all of the eras of Metal Gear, each piece of music, each main theme is unmistakably Metal Gear. When you consider different composers, and that this chronological consistency was achieved out of order (because the games are definitely not in chronological order), it is clear that many brains put a lot of thought into the series as a whole, and represents an incredible musical achievement.

Not enough can be said for Nicholas Buc and the orchestra. His masterful precision and clear enthusiasm was mirrored by the musicians. Every gaming music concert I’ve attended has employed some of the finest professional musicians in the world, and Metal Gear in Concert was no exception. The clarinet and French horn solos stood out, earning well deserved applause.

I still have fond memories of struggling with the dogs and sneaking around guards in the original NES Metal Gear. Many of us joined the franchise with Metal Gear Solid on PSX, or even later. For fans of the series, Metal Gear in Concert isn’t just a trip down memory lane, but a heartfelt, passionate tribute to a historic franchise and a decades long journey for one of gaming’s most iconic characters. If you have the chance, run out and see Metal Gear in Concert.