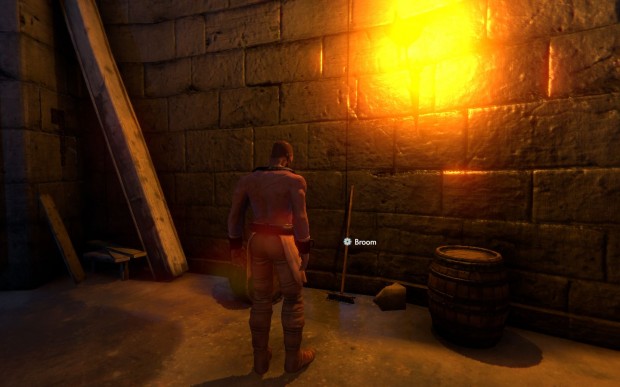 Episodic games are a challenge to evaluate on a by-release basis. The sagas are usually a sum of their parts rather than standalone works, and so it’s hard to understand it fully without seeing what the intended end result is. That being said, the first release of Dreamfall Chapters is a strong showing, if not a little misguided.

For a little background to this review, I explored the world of Dreamfall’s predecessors, The Longest Journey and its sequel, Dreamfall: The Longest Journey. I had never played the first two titles, and I’m still trying to understand some of the finer details of the series’ universe. While I still can appreciate much of the story of Chapters, and am enjoying the feeling of being plunged headfirst into a strange world with little background, newcomers may be turned off by the amount of lore and story to feel fully “in the loop.”

The dream area in the start of the game is an interesting introduction to the game’s mechanics and logic.

You take on the role of Zoë Castillo, a coma patient who was placed in her current state by her mother. You are told through narration that Zoë had uncovered a massive conspiracy, and Zoë’s mother placed her in this coma to prevent the full truth from getting out. In her futuristic world of Stark, many people use addictive contraptions called Dreamachines to have perfect, fully lucid dreams. These machines are being used by the evil WatiCorp company to inject thoughts and ideas into the populace, controlling and manipulating people. At the same time, there is a parallel world called Arcadia with its own plotline. Arcadia is the yin to Stark’s yang; a fantasy world with magic and talking animals, you follow Kian Alvane, a warrior jailed for high treason. A former Apostle, he has come to question and forsake his vows after meeting the now-deceased April Ryan, one of the former games’ protagonists.

The story is sprawling and intricate, but sometimes seems overwhelming. While it’s difficult to briefly explain a trilogy in the depth one would expect of a story-driven game, a recap of the previous games’ events for newcomers would be greatly helpful. There’s a lot of characters and plots to understand and appreciate, and having to read Wikipedia pages trying to comprehend the vast stories isn’t a great introduction.

Most characters are interesting, but some – like Mira – can become grating.

As you progress through the two chapters and interlude of Book One, you’ll find yourself travelling from the dream world of Storytime to an Arcadian prison and even Europolis, a mega-city covering most of central and western Europe. The two protagonists of the game, Zoë and Kian, both deal with a mysterious visitor that will set their paths in motion, but sadly we only receive exposition, and little progression. This is the issue with episodic evaluations; I found myself groaning at Zoë’s story, as it seemed to drag on with slice-of-life antics and took its time in getting to meaningful moments or decisions. On the other hand, Kian is fleshed out immediately, and the choices and conflicts Kian deals with in his Book One chapter were much more engaging. Decisions were compromising and difficult in both, and that’s where the game really hits its stride.

Choice is the key to this game, and the system Chapters uses is similar to games like The Walking Dead, but with more narration and explanation. At certain points, the player is presented with multiple responses in a conversation, and each has their own voiced-over explanation of the thinking behind each answer. This is a godsend for those who played LA Noire and wondered how one choice to lead to something so drastically different from what they chose. After reviewing options, you’ll make a decision, and sometimes be greeted with the wonderful “X character will remember this” notification. While that was a bit cheesy, the balance decisions, which are major ultimatums that are supposed to ultimately alter the course of the story’s events, are interesting and difficult. There is also the option to see what other players have chose before you pick, although I never used it outside of curiosity; many of the game’s choices feel personal and philosophical, and determining personal ideologies based on the internet has never been a wise idea.

Most puzzle solutions are straight-forward and sensible, even one including the combining of a pillow and a broom

As for the mechanics of the game, it is fairly standard point-and-click fare. You have several options to interact with items, and in the dream segments, you gain a few powers to toy around with. Luckily, there are few of the commonly convoluted solutions that plague adventure games. Most solutions are logical and easy for the player to reason out. There are a few occasions where camera control got messy, and the controls for directing people in certain directions are unnecessarily difficult. It would be easier to simply give an option prompt than to manage the giant spinning arrow, but it at least keeps things fresh.

Graphics-wise, the game is gorgeous. Character animations and faces have noticeable improved, but even clothing and water textures look fantastic. The art direction of the game is fascinating as well, as there are noticeable differences between not only different worlds, but different areas within each world. The game feels alive and vibrant, and the sights of Book One will stick with you long after completion. My only issue was with the overuse of visual effects in the slums of Europolis. The details are beautiful, but obscured by lens flares that would make JJ Abrams blush. There were some graphical effects in other areas too, but those in Europolis were the only noticeably annoying ones.

The dystopian, futuristic Stark is an amazing setting and nice contrast to the magical Arcadia

As a whole, Book One is a strong showing with a few bumps. The game is likely to pick up as the series continues, but until the full release it will be difficult to fully evaluate Dreamfall Chapters. If you’re a point-and-click fan looking a for a new game with some heart and a complex storyline, it would be a worthwhile investment to see where this goes. Dreamfall definitely has some big things in store from what Book One has shown already, and it will be quite a ride seeing how it gets to where its going.

Dreamfall Chapters is a strong adventure game, held back only by the required knowledge base for entry. A fascinating game with interwoven tales, beautiful set pieces and believeable protagonists, Dreamfall is going strong and only getting started.