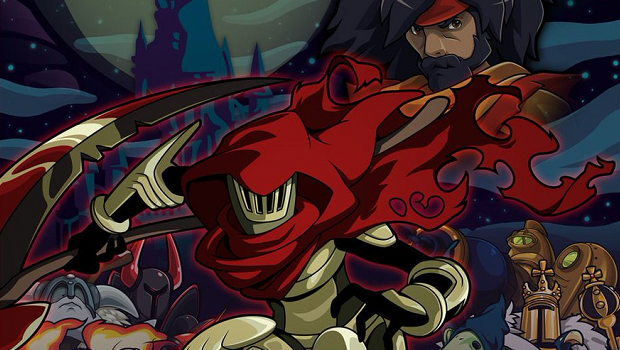 A skeletal knight in pale golden armor and a crimson cloak strides confidently down the street. The locals have nothing to fear from the wicked scythe he carries, but just in case, they treat him with the utmost respect. Specter Knight makes his way toward the portal to recruit other powerful knights for the Enchantress. Or goes shopping. Or chats with the undead. Or climbs up walls. It’s really up to you, the player, because Specter Knight is your character.

I have a confession to make: I’ve barely played the standard Shovel Knight game. I thought it was kind of cool, but I already had a long list of games I intended to play. But after playing Specter of Torment, I find myself wanting to give it a go. The level design straddles the line between simple fun and maddening difficulty for a challenge that never leaves you bored and rarely frustrates. You can gain concrete benefits from exploring each level thoroughly and finding as many treasures and collectibles as possible.

At the risk of being called an “edge lord,” Specter Knight has a definite edge over Shovel Knight in style.

The above pun was not intentional when I first thought of that sentence, but now it is.

His diagonal semi-homing attack allows for some unique platforming challenges, and it’s extremely helpful in most boss and mini-boss fights. If Specter Knight is below his target, an aerial attack will send him soaring upward.

A diagonal line will appear when you’re close enough to make an aerial attack.

If above, he will dive as he swings. An attack that destroys your target will make Specter Knight swing straight through it, landing wherever his momentum carries him, so you’ll need to be careful when attacking weaker targets near the edge of a platform. Sturdier targets will allow Specty to bounce off them, allowing for an immediate (and usually safe) follow-up attack if the target is stationary.

Specter Knight also has the ability to climb walls for about a second at a time.

If he reaches the top of the wall within that time, he leaps up onto the ledge above; otherwise, he falls and can’t start climbing again until he’s slightly below where he started. However, if you jump off of a wall while climbing, you can begin climbing a nearby wall to gain even more height. If there’s a ladder right next to a wall, you can transfer to it directly from the wall just by pressing up, which was very helpful in some places. The only trouble I had with the controls was the fact that wall climbing works by moving toward the wall, which meant that I sometimes ended up wall-climbing by accident when I wanted to move forward immediately after dropping below the wall. In standard gameplay, though, this is only a minor annoyance.

The game also presents the player with a variety of Curios, or spells. These are unlocked by finding collectible Red Skulls and trading them to a red skeleton in town.

Not pictured: The original leader of Hydra.

You cast Curios from a magic meter called your Darkness. Some are more useful than others, but the way they’re introduced is very helpful. You’re put into a mini-level where you can’t use your scythe and must rely exclusively on the new Curio. For these mini-levels, you’re given an unlimited supply of Darkness, so you’re completely free to experiment with your new power in an environment that is specifically designed to show you what it can do. You’re given a brief description of the Curio, but mostly, the tutorial takes a “show, don’t tell” approach, which I love. It’s very clearly a tutorial, but it doesn’t feel like one at all.

In addition, you get a variety of outfits to choose from, should you obtain enough money to purchase them. Visually, they’re represented as recolors Specter Knight’s sprite, but most have additional gameplay effects. The one I used most often was the Cloak of Clemency (neon green armor with a magenta cloak), which makes Specter Knight respawn nearby after falling into pits or on spikes with less Darkness and Will (life meter for an undead protagonist—nice little bit of attention to detail) instead of just instantly dying and going back to your last checkpoint. Nothing takes the wind out of my sails like an instant death that costs me money and progress.

Is there a fitting room around here, or…?

Other options include the default Crimson Cloak with pale golden armor; the Striker’s Shawl, which allows you to charge your scythe for more powerful attacks (orange armor, indigo cloak); the Rail Mail, which give you the ability to grind skateboard-style on spikes and surfaces (silver armor, black cloak); the Raiment of Risk, which lets you sacrifice checkpoints and max Will for auto-regenerating Darkness (beige armor, dark brown cloak); and the Ghostly Garb, which has no gameplay effect (white armor, light gray cloak).

The other major shop is one of my favorite features in the game: the Wisp Shop.

Ain’t nobody got time to repeat levels!

If you miss a Wisp chest (expansions for your Will and Darkness meters), you can just buy it instead of repeating the level and trying to find it again. You can only buy Wisps from levels that you’ve already beaten once, however, so your money doesn’t allow you to become overpowered early in the game.

There’s one more thing in town that I’d like to talk about, and that’s the Amiibo Fairy.

Not pictured: Anything helpful.

By scanning a Shovel Knight amiibo, you gain a tiny Shovel Knight fairy that flies around and…well, it flies around. It has animations for attempting to grab gems, dig through piles of treasure, and fight off enemies, but none of these apparent actions have any discernible effects. It’s mildly disappointing, but I suppose Yacht Club couldn’t really have it do anything especially helpful without the upcoming non-Nintendo versions of the expansion suffering.

The graphical style, as with other iterations of Shovel Knight, is deliberately simplistic. However, I was never uncertain of what I was looking at—it’s just detailed enough to look good, clear, and atmospheric. What really surprised me was the relative depth of the story. There’s more to it than you might expect from a retro-style action platformer. It even includes playable flashbacks interspersed in the course of the game to show how Specty ended up where he is. In terms of his position and basic motivation, Specter Knight really reminds me of Marvel’s Ghost Rider, who made a deal to serve a supernatural entity in exchange for coming back to from the dead for the sake of someone he cared about.

Speaking of Marvel, there’s a post-credits scene in Specter of Torment you shouldn’t miss. Unlike theirs, however, this one doesn’t hint at a later installment in the franchise; instead, it holds an important secret about the main story of the game you’ve just finished.

After you beat the game for the first time, you gain access to three new features. The Sound Room allows you to listen to game tunes. They’re pretty cool—nothing revolutionary, but they’re definitely enjoyable. Challenge Mode lives up to its name with a series of missions centered around specific game mechanics, especially the various Curios. You can also rematch each boss in the game under a specific restriction—sometimes a time limit, sometimes a limitation on your abilities. I gave them all at least a few tries but only beat two or three. Most of them are completely bonkers. New Game Plus is similarly difficult, despite letting you keep your equipment and most of the Curios you’ve obtained. It accomplishes this combining your Will and Darkness meters and slowly auto-depleting them. This means you’re on a permanent time crunch, and any Curios you use will cost you time. I think this is the one real misstep in Specter of Torment. The way it’s set up, apart from a select few situations where a Curio can save you a massive amount of time, you might as well not have your Curios at all because you’re punished for using them. Not to my liking, although speedrunners may enjoy it. Despite numerous attempts, I find myself unable to complete a single level under these conditions. Maybe I just need to git gud.

Specter of Torment puts cool new twists on Shovel Knight’s action platformer gameplay and has a fascinating story to boot. It’s challenging but very fair, and I thoroughly enjoyed the entire game. Those who already have Shovel Knight should look forward to this excellent free expansion, and those who don’t have the base game needn’t think twice about spending $9.99 for this masterfully crafted experience.

Kyle is an unashamed longtime Nintendo fanboy. Some of his earliest and fondest memories are of playing Super Mario Bros. 3 on the NES with his grandmother. His favorite series are Fire Emblem and Metroid. Outside of gaming, Kyle is also a serious Whovian, favoring the Seventh Doctor and Ace as his preferred Doctor and companion. He also loves superhero movies, power metal music, and basically anything in the space fantasy genre. Avatar by Smashley (@SmashleyDraws on Twitter).
Related Articles: Shovel Knight: Specter of Torment
Share
Tweet
Share
Submit