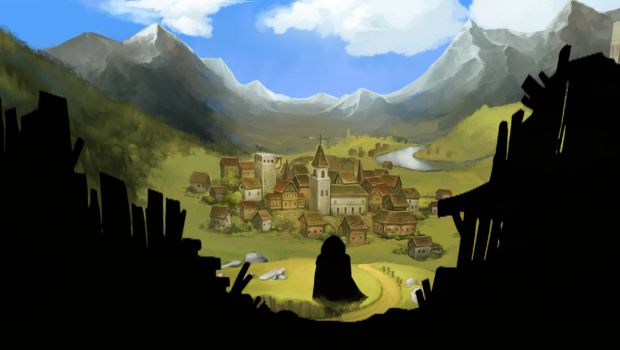 Before the simulator, before the platformer, and before whack-a-mole, there was pinball. Forever lurking somewhere in the corners of the gaming world, pinball has persisted for over seventy years as one of gaming’s most simultaneously overlooked and addicting genres. While entertaining, it’s often been approached as a novelty, existing more for its spectacle than its enjoyment. This has mostly been because of the conceptual barrier that no matter how much fun you could have with a game of pinball, it was always just pinball. Flip paddles. Slap a ball around a slanted table. Get frustrated and quit or get bored and quit. There was never much more too it, before now.

I first encountered Rollers of the Realm back at this year’s E3, and I have to admit that there were few games that made me quite as excited. Innovation is a clumsily treated word in this industry, both by those who attempt to achieved it and those who seek to write about it. However, Rollers of the Realm might be one of the best examples a person could find. I mean, combining a pinball game with anything, let alone a roleplaying basis, just seems absurd. But spend just over ten minutes with this game and the genius behind it will wash over you in waves.

First thing’s first; the story (Yes, this pinball game has one.) and how well it’s presented is just another surprise this title has to offer. Long ago, there were three great warriors who protected the realm. They maintained peace, harmony, and fairness to all, before an evil and envious witch found a way to imprison them for all eternity. Without their benevolent rulers the country was plunged into endless chaos and conflict, which your starting character, the rouge, particularly felt the sting of after losing her family and home to the fires of the conflict. Now a tired vagabond, the rouge and her faithful dog travel the countryside, stealing from the pockets of those growing rich and fat off their nation’s misery.

It’s a simple enough life, before a good deed gone wrong ends up with the rogue’s dog being stolen away from her. The rogue’s pursuit of the kidnappers begins an unexpected chain of events leading to the company of new friends, adventure, and hope she had never before dreamed possible.

As soon as the plot has laid its foundation, the gameplay begins, and just like the majority of RPG’s and all pinball games, how this time consuming element is approached plays a large factor in how well it will hold your attention.

The maps of Rollers of the Realm are laid out much in the way you would imagine a pinball game board. There are obstacles both solid and destructible, along with springs and lanes to re-route your ball in a number of directions, but nearly all of them exist with the goal of knocking your ball into the gutter. In Rollers of the Realm the gutter functions primarily as a reset, sending you back to the shooter to try your hand at the course again. There are a number of forms these maps can take. Some are a series of pinball labyrinths that require a clever mind and a fast flipper to find the various high point treasures hidden around them and the path to the exit. Other maps might just be a scoreboard, like traditional pinball, where you need to collect as much gold as possible in a certain time limit or before a challenging obstacle is added to the map. There are many of these and the diversity of them can be entertaining, but the real bell of ball is pinball combat!

Some maps contain active threats to you party of pinballs, such as street thugs, vermin, or other nasties. These opponents will move or station themselves across the boards and attempt to either knock your pinball into the gutters, or otherwise sabotage your progress. Some enemies, particularly ranged opponents, can target and damage your primary flippers, potentially leaving your gutter more vulnerable if one (or both) is destroyed.

If that wasn’t enough, when there are enemies on the field your gutter will often stop behaving as a simple reset and become a death sentence, representing immediate defeat for the pinball currently in play and its removal from your active party. This raises stakes considerably, but Rollers of the Realm has clever way of allowing you to even the odds.

Each of your party members is represented by a different pinball, which all come with different sizes, speeds, behaviors, and abilities. When launched, these differences alter how the pinballs will affect the items on the map and when the circumstances arise, how the pinballs affect each other. For example, the knight pinball is heavy, meaning it requires unique timing with your flippers. However, it also damages destructible on-screen items and opponents more quickly, and in addition, its large size makes it easier to hit and harder to zip between the gaps, making it more difficult to gutter. The rouge on the other hand is light and small, meaning it is harder for opponents to strike and can fit between narrow gaps. Plus, if it strikes an enemy from behind the damaged is multiplied as a backstab. But, the rouge can fly past your intended flipper in a second, leading to a quick and frustrating doom.

Beyond the differences in their dimensions and speeds, pinballs have their own abilities. When caught and cradled in an up-turned flipper, players gain access to that pinball’s special abilities. The knight for example can create a shield which blocks the gutter for a period of time, allowing it or other pinballs to freely move across the map. The healer pinball can return pinballs lost in combat back into your queue, which can be toggled through by once again cradling your current pinball with one of your primary flippers.

Also, in true RPG fashion, all of your pinball’s abilities and stats can be improved by visiting merchant towns, where you can buy gear with your hard-earned gold. By equipping different item to your pinballs, you can increase the rate they gain mana to perform their special abilities, or the damage they deal when hitting enemies or barricades. You can also hire mercenaries and hired hands to add to your lineup and diversify your pinballing tactics.

Mixing all of these components together creates a really fun time, and a fantastic result from a bizarre concept. The only areas where I could make complaints are restricted to gripes players have had with pinball for generations. Despite all of its best, at times outright ingenious efforts, Rollers of the Realm is still pinball, and sometimes can feel more like a game of chance than a game of skill. When things go wrong they go wrong in a hurry, and a total-party-kill can happen in less than a minute if you become impatient or just get hosed by the flippant laws of digital physics.

The opposite is also true. A series of lucky flips can shoot you through the various maps in an instant, making the game feel empty and quick. This isn’t a flaw in the game, but it is something that might sour your good time.

The atmosphere of Rollers is charming and pleasant, but I never encountered anything that particularly stood out. This game isn’t a graphical powerhouse and doesn’t contain musical scores you’re going to find yourself humming on your way to work. But all this titles parts are crisp and well crafted, allowing the game to roll on all cylinders despite whatever platform you decided to purchase it on. Since smooth interaction is the key to enjoying Rollers, if there was a choice made that prioritized control then I feel it paid off.

Rollers of the Realm

Rollers of the Realm is just as good as when I first encountered it at this year’s E3. It’s an enormously fun and creative take on two genres you would never think to see in bed together. The gameplay is tight and responsive, the boards are intricate and clever, and the splendid voice acting is an added delight. Rollers is in nearly every way more than you’d expect from a typical pinball game. At just $9.99, this a great holiday buy if you’re looking for a digital stocking stuffer or just want something fun and new.

I've been a huge fan and critic of games and movies ever since I had a voice to speak about them. I love power and influence of great storytelling, interactive and otherwise, and now want to be more than just a consumer. My biggest strength in this regard? Almost every time, I'm fair all the time.
Related Articles: Rollers of the Realm
Share
Tweet
Share
Submit