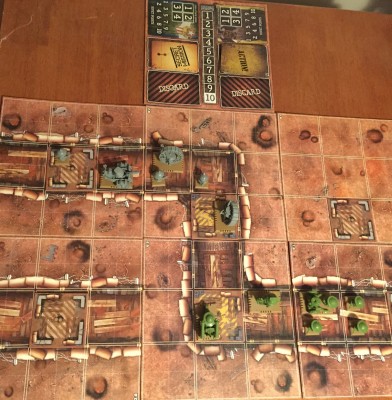 A while ago a game called Advance Wars came onto the scene for the Nintendo Game Boy Advance. While it contained a cute aesthetic, it made war games accessible to the general public. When board gamers think of a war game, they might think of sprawling miniature armies with a tape measure used to determine if units are capable of attacking. Others might think of a hex or tile-based board with figures slowly moving and multiple dice rolled to determine the outcome of battles. When Rivet Wars came across my table, it reminded me of Advance Wars, which is a breath of fresh air.

The games have a World War I aesthetic to it. The exaggerated hats and uniforms on the infantry units bring that theme out. The figures look cute, with big heads and small bodies, but not in a chibi style. The mechanical units look like fantastical machinations that have steampunk influences. The detail level isn’t surprising considering the previous games Cool Mini or Not has produced. It’s called Rivet Wars, and they aren’t kidding. The rivets on each unit are easily seen, helping keep the theme intact.

As you might expect in Rivet Wars, the Allied and Blight combat each other on a battlefield made up of tiles. Each tile contains nine grids, and each grid holds four squares. The grids tiles forming the battleground differ depending on the scenario played. Each side has deployment areas on the grid, with bunkers, strategic objectives, minefields, traps, and barb wire strewn about. Ten scenarios are included, with most of them using eight or nine of the tiles.

Two different types of cards help bring variety to Rivet Wars. Action cards give an element of surprise to the commanding officer, allowing reinforcements and surprise attacks. Secret objective cards give players additional ways to earn victory points. In the first phase of a player’s turn, they can discard an action card, draw a new action card, and draw up to two secret mission cards. Each player can hold up to three action cards and two secret mission cards.

Once the cards have been taken care of, the troops are deployed. Each turn deployment points and rivets are generated by the player. Each unit requires a number of deployment points. Infantry take fewer deployment points, but have less armor and health. Stronger units require more deployment points, and often require rivets. Special units called heroes can only be played once during the game, so they own powerful abilities, but they cost more as well. Bringing it out at the right time needs to be considered highly. Plugs are cool units that actually fit into specific units. When it is deployed, the unit it plugs into must be in player’s territory on the map, and it gives that unit extra abilities. Since units are destroyed fairly often, you will be able to bring troops out constantly.

After troops are deployed, combat takes place. After a grid is selected, each unit in that grid is activated. Each one may use any special abilities or attack as normal. Once you determine where you want to attack, you look at the defender’s armor and use that to find out how many dice the attacking unit gets to roll. A unit is damaged if a five or six is rolled, but a successful attack results in only one point of damage no matter how many fives or sixes are rolled. The placement of the units in the grid matters as well, because that determines the order units are attacked in. Units also have range for land and air, but no air units are included in the base game. Rivet Wars is unique in that units attack before moving, making unit placement important.

While Rivet Wars uses victory points, I don’t mind using that scoring mechanic because they directly reflect on how successful the player is in the scenario. The issue with capturing strategic objectives is the fact that only infantry units can do this. This means that you just can’t bring out only the stronger units. The infantry units are needed to win in most scenarios since that’s the only way besides secret mission cards to score victory points. Using infantry and bringing them out constantly and keeping them protected takes strategy.

Looking at Rivet Wars, it is built for expansions. As previously mentioned, no air units are included, although the range for air units is included. I would have liked to have seen a couple of air units included that could have been introduced in later scenarios to give a taste of what is to come. Also, armor rankings go from one to five, but the strongest armor on a unit included is three. Even a single four or five armor unit would have introduced another wrinkle in the strategy.

The two sides in Rivet Wars are asymetical, so you can play the same scenario as either side and your strategy changes. For instance, the Allies infantry can take out a Blight infantry squad without any issue, but the Blight infantry have the weaponry to destroy vehicles making the Allies’ speed work against them. These sides do feel balanced, which shows how much thought went behind the design of the sides.

The simplicity of rolling six-sided dice to determine damage works. However, I could imagine a system like Conquest of Nerath where different sided dice are rolled depending on the unit attacking and the number to roll needed to hit depends on the enemy. I understand wanting to keep the attacks simple, but an opportunity to make combat more interesting is missed.

The production quality of Rivet Wars matches previous Cool Mini or Not products. While the cards could be a little thicker, the detail on the figures is amazing. The game is named “Rivet Wars,” and you can see the individual rivets on each figure. The figures also contain small slots to put in small damage markers, making it easy to see how much health a figure has. I did notice the corners of my tiles seemed to curve up a little, but not enough to affect gameplay.

Overall, Rivet Wars is a fun, light game that makes a great introduction to wargaming, but the artwork and figures gives off a comic style that lightens the mood. If you want to give war games a shot but don’t want to deal with tape measures or hexes, or want to try to get your friends into some strategic gaming, give Rivet Wars a shot.

While not working as a Database Administrator, Keith Schleicher has been associated with Gaming Trend since 2003. While his love of video games started with the Telestar Alpha (a pong console with four different games), he trule started playing video games when he received the ill-fated TI-99/4A. While the Speech Synthesizer seemed to be the height of gaming, eventually a 286 AT computer running at 8/12 Hz and a CGA monitor would be his outlet for a while. Eventually he’d graduate to 386, 486, Pentium, and Athlon systems, building some of those systems while doing some hardware reviews and attending Comdex. With the release of the Dreamcast that started his conversion to the console world. Since then he has acquired an NES, SNES, PS2, PS3, PSP, GBA-SP, DS, Xbox, Xbox 360, Xbox One S, Gamecube, Wii, Switch, and Oculus Quest 2. While not playing video games he enjoys bowling, reading, playing board games, listening to music, and watching movies and TV. He originally hails from Wisconsin but is now living in Michigan with his wife and sons.
Related Articles: Rivet Wars Eastern Front, Tabletop
Share
Tweet
Share
Submit