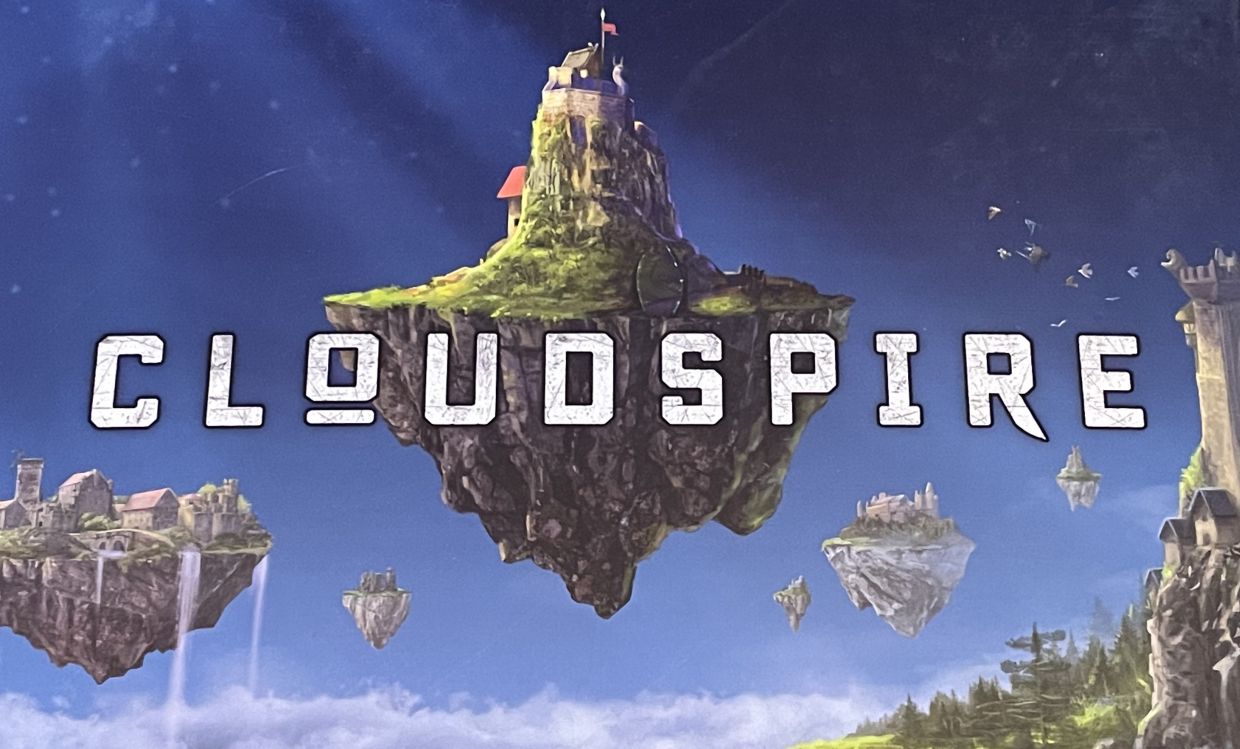 Unpacking Cloudspire you might think that it was some kind of battle royale game with hex tiles, chips of units, and base camps. While battles abound, more strategy lies beneath the surface, which shouldn’t surprise you if you’ve played any other titles from Chip Theory Games.  How much depth might determine if Cloudspire is for you.

Starting Cloudspire involves choosing one of the four factions included in the box and creating the map. The map contains hexes with multiple land types, but most hexes consist of path hexes which must be matched up against the center isle. Bases for each player get attached to a path hex, which is where each player’s units will start from. The bases are the objective of the head to head game, where you try to destroy your opponent’s base while defending your own. Throughout the map are source wells which are areas that get landmarks placed on them. Eventually spires for defense can be built on these source wells. Finally, you set up a market of multiple items that can be purchased near the beginning of each wave.

Cloudspire plays over four waves. First, you have an event deck that affects the current wave. Although the event deck doesn’t come into effect until wave two, the events it causes can have a large impact on the game. Events include gaining double the source for defeating opponents, causing all spires to lose their bottom upgrade, building a non-aligned spire in the center isle, or teleporting a unit several hexes away. Because of their impact, or to shorten the game, Chip Theory recommends not playing with these event cards at first due to their impact. I agree with this statement because Cloudspire takes a while to understand all the moving parts, and adding these can be frustrating if you don’t know what your faction is capable of and how to mitigate them. 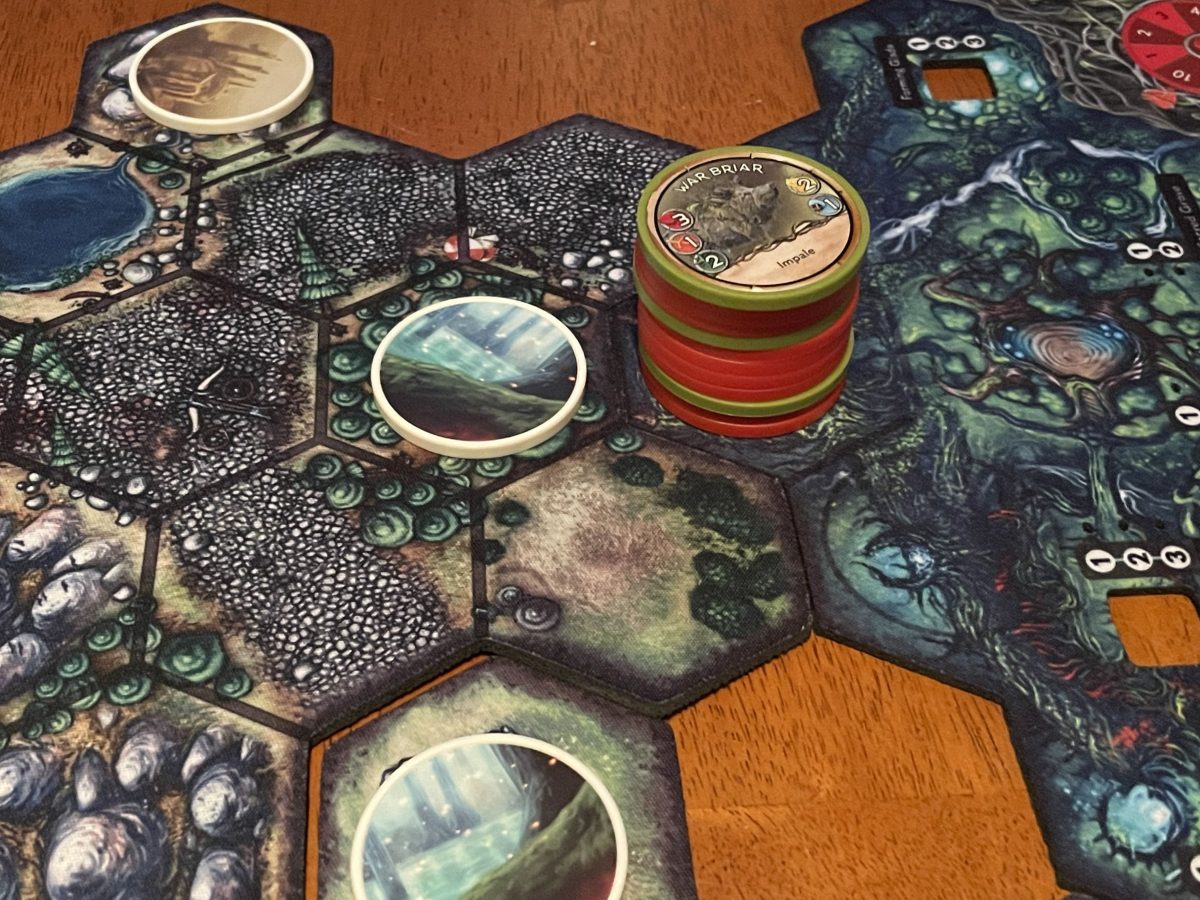 An income phase comes shortly after the event phase. Each wave the amount of source, your in-game currency, increases by two, starting with five source in wave one and reaching eleven in wave four.  The source can be used to purchase items in the market. The market contains earthscape hexes which can be placed on the board to modify the terrain, as well as chips which represent hero equipment, mercenary spires, mercenary heroes, and mercenary minions. You won’t want to spend all your source during this phase because you’ll need it for the build phase which happens next. Constructing and upgrading spires and advancing your fortress requires source as well. Earthscaping doesn’t require a source cost since it was already paid during the market phase.

The most important phase might be the prep phase. Here you choose the units placed on the board. Faction minions and heroes need command points to be deployed, while merc minions and your starting hero don’t require any. These command points increase each round just like the source in the income phase, increasing your options as you play. Then you’ll create a stack that contains all the units that you’ll deploy. This determines the order the units will be deployed. Another important decision is how you group minions. If you group them together they act as a single unit, but only the minion on top determines what movement and abilities are used. Heroes can’t be grouped with any other units.

All of this planning and preparation finally pays off in the onslaught phase, the meat of the game. While there are a few other steps involved, you’ll mostly move, explore landmarks, and attack. During movement you can move some of your heroes first, then all of your minions move, and then any remaining heroes that haven’t moved yet can move. 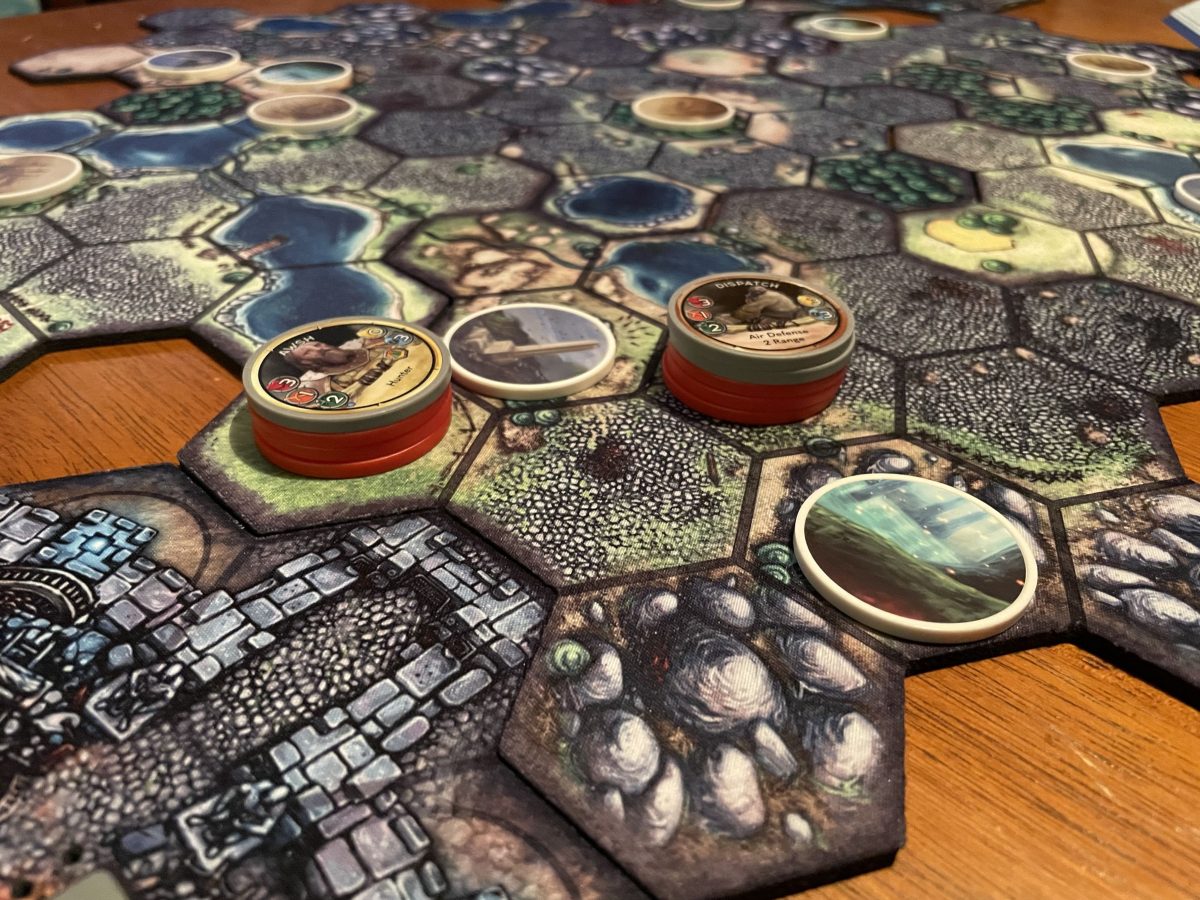 Heroes and minions are similar in that they have health, attack, movement, and command point cost. They also can have special talents unique to them, however they differ in significant ways. Minions can only move along a path towards the opponent’s base. Heroes can move over other terrain and aren’t forced to move directly towards the base. Heroes can also have upgrade chips that can give additional attack or defense and can be promoted as well to increase their stats.

After moving units can explore any adjacent landmarks. The player takes a look at the underside of the chip and decides whether to put it face up or face down. Some of these landmarks are hostile and may hinder your units on the board, but defeating the landmark can result in more source for your team. You need to be careful though, as some landmarks have a talent that requires them to be placed face up as soon as they have been explored. This can leave your units open for attack.

At the end of each players’ turn is the attack phase. Minions must attack if they can while heroes have the option to attack. The attack stat determines how much damage they do, and attacked units retaliate the first time they are attacked. Defeating an opponent can result in gaining source. This phase ends if all units are deployed and all faction minions are not in play. Otherwise, the phase starts over again with any start of turn elements going into effect and any limited build options used to construct or upgrade spires. 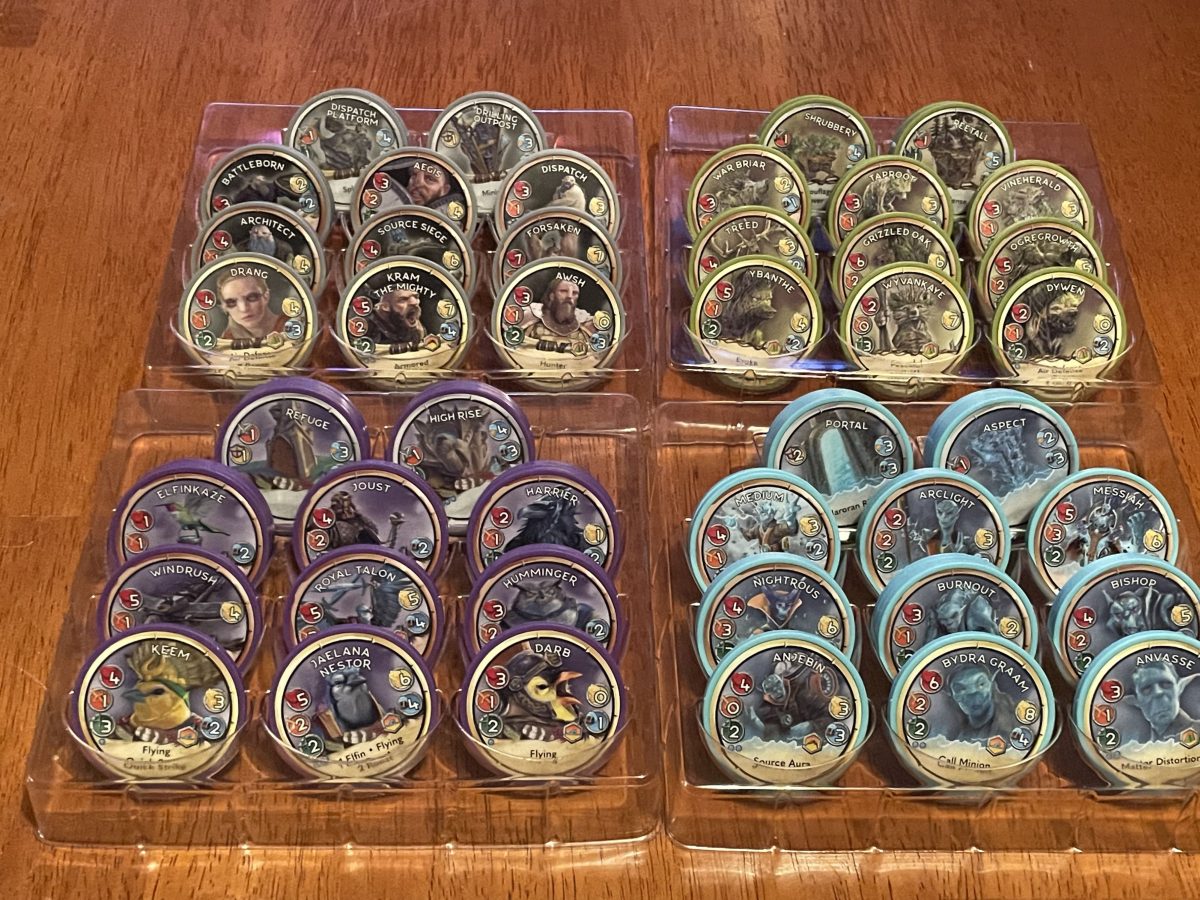 Cloudspire has many options, but in a two player game you win by conquering your opponent’s gate or having the most powerful gate if both still stand. This is probably the best way to play it, but a few other options are available. If three or four people play on a map, then winning requires all other gates to be down or to have the strongest gate at the end of the fourth wave. If a gate goes down, the player can repair it to a strength of three at the start of the next wave. You can also play Cloudspire as a solo or two player cooperative game. Separate scenarios are included to play this mode, which is similar to a horde or onslaught mode with the players trying to survive waves of enemies.

Cloudspire includes four different factions to play, and each one feels unique because of the talents each of the units can have. These talents set each faction apart and give them their own distinct personalities. Talents include things like being able to fly or attack flying units, summoning other units, reducing damage, healing damage, attacking with splash damage, and being able to promote other units. Each faction has their own sheet that explains what each talent does. Unfortunately, there isn’t a single sheet of the talents in the box with all of them on it so you can see what talents your approaching enemies have.

As you might expect, Cloudspire is not a short game. Having factions laid out in their own trays helps the setup time, but setting up the board and the market takes time. If you have someone who takes a while to make decisions, the market and build phases could take especially long to complete. As the waves go, you get more options and more source to do with what you want. You’ll want to block off a good amount of time to play the game. Chip Theory suggests performing the build phases, prep, and onslaught phases simultaneously to help the game move along faster. You just have to be careful in the onslaught phase when heroes and minions might meet up together. Chip Theory also suggests playing three waves instead of four to shorten the game. 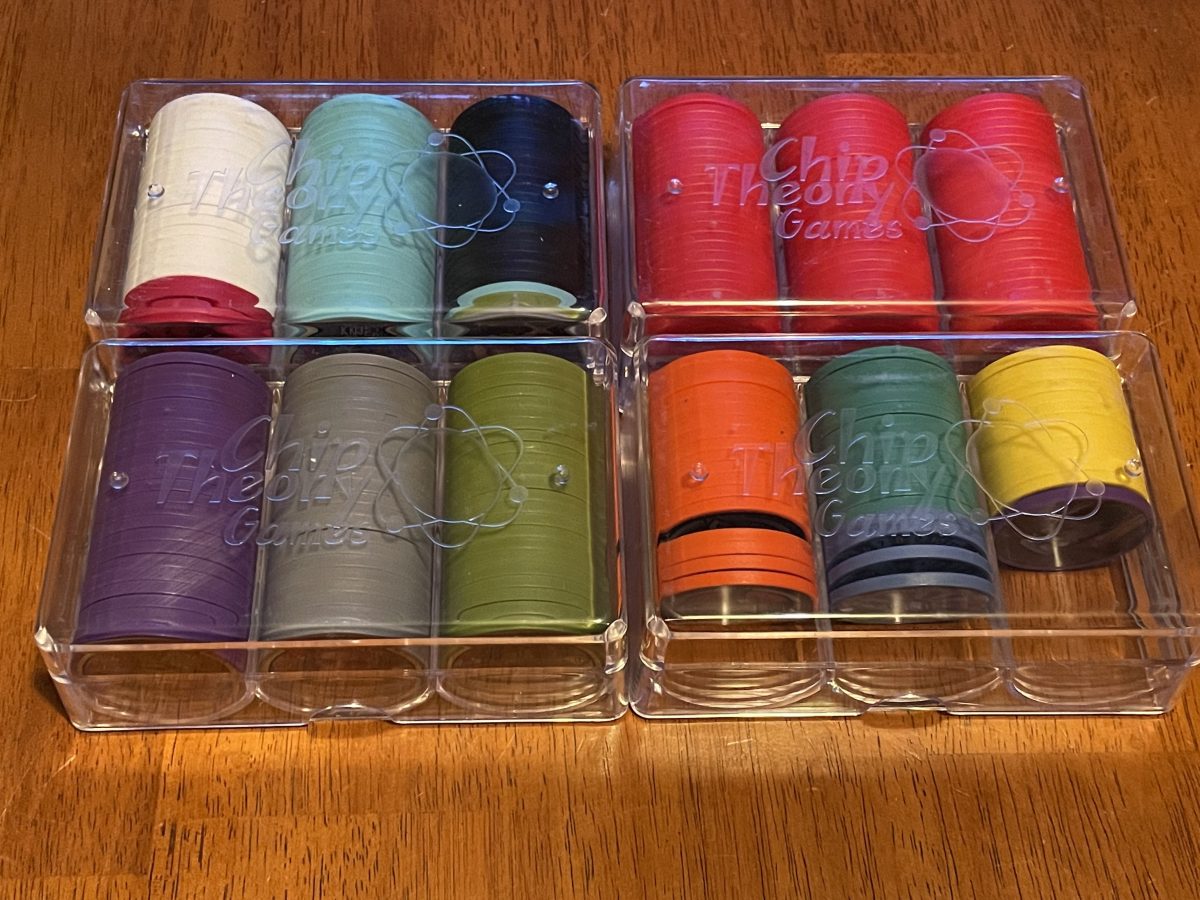 If you’re familiar with other Chip Theory Games products, you know their components are top notch. The neoprene board works well, and the fact they used hexes makes them unique. The chips for the units have a nice heft to them. The artwork on these chips are in full color instead of the monochrome chips of Too Many Bones, making them pop. The stacks of chips really give the game a unique table presence. All the chips have storage trays for putting it into the box, but they’ve also included barracks organizers that can be used to hold your faction’s hero, minion, and spire chips. The health chips are the same quality as the Too Many Bones plastic, so they aren’t as heavy. They work fine, but Chip Theory Games sells upgraded health chips as well. This means that it’s not a cheap game, and you’ll need to get it at a game convention or directly from them through their website.

The more you play Cloudspire, the more you’ll get out of it. You might feel like you don’t have much control over the minions, but the order and grouping of them can make a huge difference how long they’ll survive. Do you have them move separately to try to attack more enemies, or do you stack them together to surprise the opponent? Do you move your heroes first or last? Do you build a spire at your base or try to get a location on the path ahead of your base? How many upgrades should you build on your spire, and which ones? With the four included factions playing much differently, the number of options are vast.

Chip Theory Games doesn't disappoint with Cloudspire. The game can feel overwhelming at first, but as you play you'll feel the rhythm of the waves. You can try to plan the best you can, but you never know what kind of curve balls you'll encounter on the map and from your opponent. The faction strengths can help guide your strategy, but you will need to try to address their weaknesses as well. You might be asking “what if…” after your game, but that’s often a sign you'll want to pull it out again soon. If you can find others to play this with, you'll find yourself with a satisfying experience.

While not working as a Database Administrator, Keith Schleicher has been associated with Gaming Trend since 2003. While his love of video games started with the Telestar Alpha (a pong console with four different games), he trule started playing video games when he received the ill-fated TI-99/4A. While the Speech Synthesizer seemed to be the height of gaming, eventually a 286 AT computer running at 8/12 Hz and a CGA monitor would be his outlet for a while. Eventually he’d graduate to 386, 486, Pentium, and Athlon systems, building some of those systems while doing some hardware reviews and attending Comdex. With the release of the Dreamcast that started his conversion to the console world. Since then he has acquired an NES, SNES, PS2, PS3, PSP, GBA-SP, DS, Xbox, Xbox 360, Xbox One S, Gamecube, Wii, Switch, and Oculus Quest 2. While not playing video games he enjoys bowling, reading, playing board games, listening to music, and watching movies and TV. He originally hails from Wisconsin but is now living in Michigan with his wife and sons.
Related Articles: Cloudspire
Share
Tweet
Share
Submit